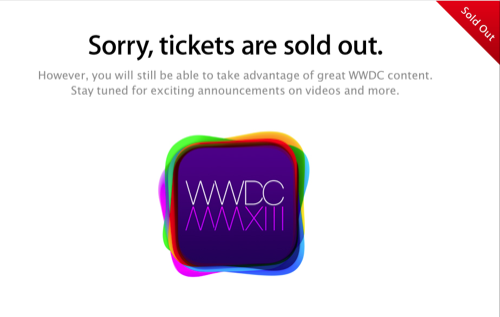 Tickets for WWDC have sold out in just two minutes.

Over the years WWDC tickets have sold faster and faster as the company has become more and more popular with developers.

Apple’s announcement that this year’s Worldwide Developers Conference will take place on 10-14 June came with a surprise forewarning that the tickets for the event, which traditionally sell out within hours, will go on sale on Thursday 25 April (today) at 10am PDT, which is 6pm UK time.

Last year developers from the West Coast who woke up to find that WWDC 2012 had been announced and sold out long before they stumbled out of bed.

In previous years, Apple hasn’t given developers wishing to attend the annual event any warning about when tickets will go on sale, which has left many disappointed in the past. Last year, all 5,000 tickets sold out within two hours, and that’s despite them going on sale at 5:30am PDT.

In its press release announcing the timing for WWDC Apple hinted that developers will be treated to an “in-depth look” at iOS 7 and  OS X 10.9, Apple’s next mobile and Mac operating systems, at WWDC 2013.

“At the five-day conference, developers from around the world will learn about the future of iOS and OS X, enabling them to create incredible new apps with innovative features,” the press release reads. “WWDC will also feature more than 100 technical sessions presented by over 1,000 Apple engineers, hands-on labs to help developers integrate new technologies, as well as the popular Apple Design awards, a showcase of the most outstanding apps available through the App Store and Mac App Store.”