Two newly published patent applications reveal that Apple is exploring the use of curved and non-rectangular batteries hinting that we may see a new shape of device joining the iOS lineup in the future.

The patent applications, which have been filed with and published by the US Patent and Trademark Office, are titled “Curved battery cells for portable electronic devices” and “Non-rectangular batteries for portable electronic devices,” which both cover methods to manufacture batteries that allow a more efficient use of space within a device’s casing.

“Efficient use of space may be limited by the use and arrangement of cells in existing battery pack architectures,” Apple explains in its patent description. “In particular, battery packs typically contain rectangular cells of the same capacity, size and dimensions.”

The manufacturing methods described in Apple’s patent filings aim to solve this problem, by enabling the battery to take on a non-rectangular or curved shape.

“In some embodiments, the curve is formed to facilitate efficient use of space inside a portable electronic device,” Apple describes. “For example, the curve may be formed at one or more ends of the battery cell to allow the battery cell to occupy a curved and/or rounded space within the enclosure of a laptop computer, tablet computer, mobile phone, personal digital assistant (PDA), digital camera, portable media player, and/or other type of battery-powered electronic device.”

To achieve a ‘non-rectangular’ shape, Apple proposes removing material from the battery before stacking the cell layers to form a rounded corner, rather than the pressure and heat methods that could be used to create the aforementioned curved batteries.

Such batteries could be used to create an iPhone that looks similar to this concept image. 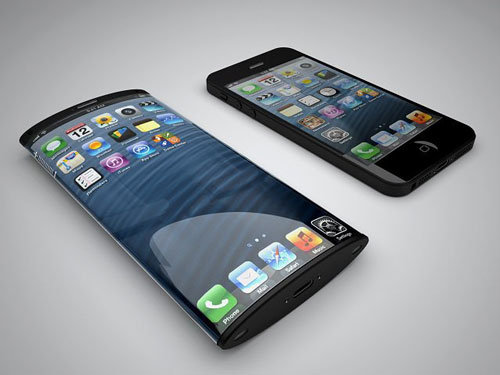 In April, photos of an allege iPhone 6 prototype emerged online, showing what appears to be an iPhone with an edge-to-edge curved display and no home button, which would also benefit from a battery that differs from the traditional rectangular shape.

Apple’s next-generation iPad is also rumoured to be undergoing some design changes, which could involve a slimming down of the 10in tablet. Apple could be planning on using a different shape of battery in order to allow more room for other internal iPad components.