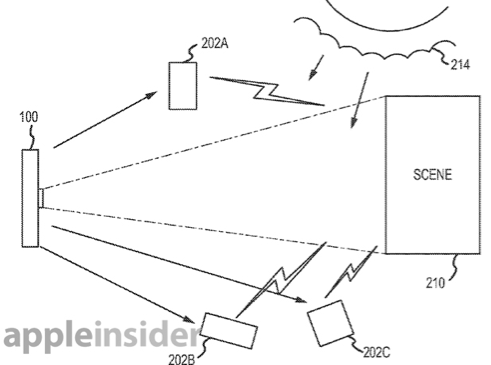 Apple has filed a new patent in which a primary iOS device controls many other secondary devices as assistant flashes in order to light the scene.

When taking photos in low light the outcome may not always be as desired, that’s why we use flashes to light the scene up. But, one flash might not be enough or it might ruin a face shot, and presumably that is why Apple have come up with this new system.

Apple’s patent has been filed with the US Patent and Trademark Office as an “Illumination system“.

It described “A method for capturing an image with an image capture device, such as a camera or mobile electronic device,” and describes a way to initiate a relationship between the camera (or iPhone) and a secondary device. It also refers to capturing test images taken while the scene is illuminated by different light sources and analyzing those test image to determine if an illumination of the scene should be adjusted, the complete transcript of the patent is available at Apple Insider.

The idea is credited to Richard L. Baer, Apple’s engineering manager, and was first filed in November 2011.

The patent could be considered as a “social camera flash” seeing as multiple devices are used to light up a scene; all of them being controlled by the main device (an iPhone, iPod or iPad). The main device can either be a camera enabled handset or a normal camera, whilst the secondary devices can be ones with lighting capabilities or be the same product as the primary device. All of the secondary devices can be controlled manually or automatically, to make sure they flash at the same time or in a desired sequence.

Taking photos with iPhones is becoming more and more popular, due to the large number of photo editing and camera apps, such as Instagram, and the ease of uploading images for sharing on Facebook and other social networking sites.

In addition, photos taken with camera phones aren’t always the best, which may explain the trend in people choosing to use different filters on their photos. Despite the flaws in camera phone photography, the sales of compact cameras are declining – it appears people prefer to carry phones as they are much smaller, lighter and feature on photo editing options, while cameras, even compact cameras are bulky to carry around.