Apple’s lead over Samsung at the top of the US smartphone market has stretched still further, with new figures showing both companies growing their share but Apple doing so faster.

Data analyst comScore reports that Apple’s market share by number of subscribers for the three-month period ended April 2013 was 39.2 percent, up 1.4 percent on the previous quarter. Second-placed Samsung, meanwhile, saw its share rise from 21.4 percent to 22 percent. Apple’s lead over its rival, therefore, rose from 16.4 percentage points to 17.2.

But if Samsung will find losing ground on Apple galling, at least it’s moving in the right direction. The figures make predictably gloomy reading for the rest of the major smartphone firms, with HTC, Motorola and LG – the remainder of the top five – all seeing slight declines in their share. The US smartphone market has been a two-horse for some time, but the gap between Apple and Samsung and the rest continues to widen. 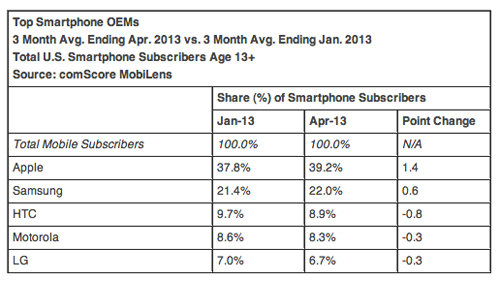 [Related: Good profit margins, not growing market share is best for Apple | What the iPhone, iPad and Mac market share tell us about Apple]

The US is Apple’s stronghold, of course (as you’d expect, given that it’s a California-based company) and Samsung shifts more smartphones globally. Apple sees a larger profit margin per unit sold, however, and saw 57 percent of global profits in the first quarter of 2013 to Samsung’s 43. (If that makes it sound like no one else made any profit at all, that’s near enough true. LG did manage 1 percent of the total profit, but was offset by Motorola making a loss of a similar magnitude.)

The leading smartphone operating system is still Google Android, but Apple iOS is catching up. Android, which is used on smartphones made by all four of Apple’s rivals in the chart above, accounted for 52 percent of US subscribers, slightly down on the 52.3 percent in the previous quarter. Apple iOS, meanwhile rose from 37.8 to 39.2 percent. It’s still 12.8 percentage points behind Android by subscriber numbers (although again, each iOS device brings in far more revenue to Apple than Android phones bring to their hardware and software makers respectively).