Mountain Lion was the ninth big cat release in just over a decade and Apple’s did not want to be the “first software release to be delayed by a dearth of cats.” So the company has named OS X 10.9 Mavericks. The choice of name was based on “those places that inspire us here in California,” and Mavericks is surfing location in California.

According to Apple there are more than 200 new features in Mavericks. They gave a taste of just a few in the WDC keynote including Maps and iBooks on the Mac, Finder Tags and Tabs, enhanced multi-display support for power users, new core technologies for breakthrough power efficiency and performance, and a new version of Safari.

One of the rumours about OS X 10.9 which has turned out to be correct is the idea that a tabbing system will appear in Finder, this will be a great way for users to cut down on clutter – currently it can be necessary to have multiple finer windows open on a Mac.

Finder tabs are very similar to tabs in Safari, Apple has taken the same basic window structure, allowing you to combine multiple Finder windows into a single window with tabs along the top.

If a user wants to copy a file from one tab to another they can just drag and drop.

In Mavericks Finder will also gain the ability to tag things. Users can tag documents when they save them. It is even possible to tag stuff in iCloud.

These tags are a little like labels (which feature currently in OS X and allow users to label documents with a colour code). However, users can now assign categories to their tags and access those tags from the sidebar, offering a new, highly intuitive way to file.

Users can even make up tags on the fly using the Save Sheet, just by typing a new tag. These will appear in the Finder immediately. 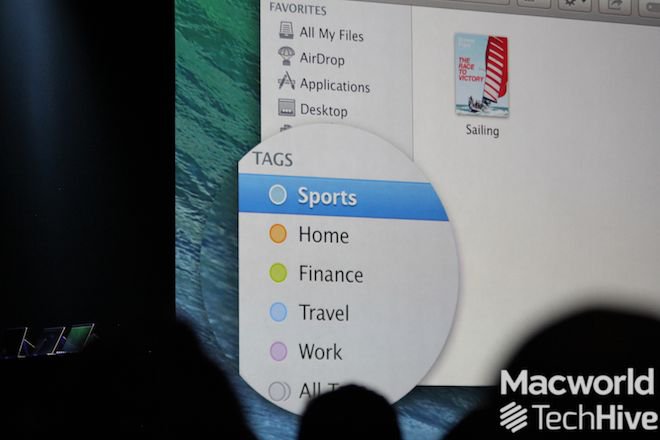 When a user opens an app in fullscreen on one display, it won’t mess with the other as it does currently; bringing up a second screen placeholder. Instead Apple will offer complete support for full screen apps on both screens. It will also be possible to drag fullscreen apps between displays.

Those with an AirPlay connected TV will be able to treat it as a full powered display. This means it will be possible to drag windows from your Mac display to your TV screen via an Apple TV.

Mission Control has also been supercharged for multiple displays, according to Apple. Users will also be able to place Spaces independently on each display. 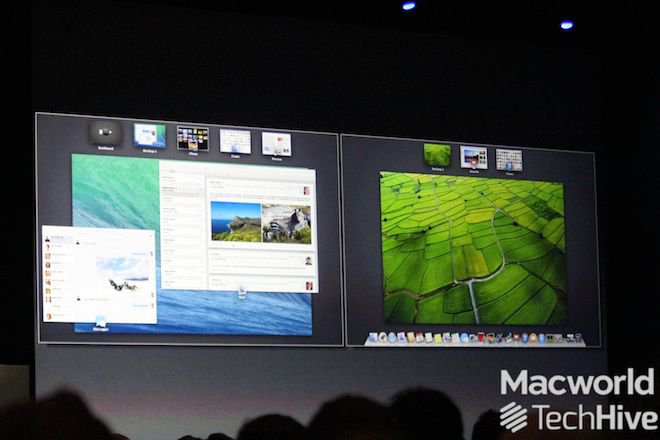 Apple will introduce a number of new technologies in Mac OS Mavericks to address responsiveness and battery life. Apple previewed two of these during the keynote address at WWDC.

The first, App Nap, directs power only to apps that need it. Apple says that this can reduces CPU utilisation by up to 72%. If like us you’ve experienced a Flash ad in Safari grabbing a load of your CPU in the background while you are working in another application, you may be eager to take advantage of this new feature which will effectively put Safari to sleep while you aren’t using it.

Apple referred to another new technology as Compressed Memory. Apple explained that an application might not be actively using all the memory that’s being hijacked by it. Instead of writing information to disk, the new technology allows Apple to compress the inactive memory and make free space available almost instantaneously. Apple claimed responsive systems under load can see up to 1.4x improvements, even on SSD. It’s also possible to see a 1.5x improvement on waking a system from standby, according to Apple.

Last year with the launch of Mountain Lion Safari gained the unified search field – meaning that there was no longer a separate field for URLs and searches. iCloud tabs made it easier to access tabs you have open on your other Macs and iOS devices. And there was also Reading List that meant users could save web pages to read later even if you were offline.

Now Apple is adding a new Top Sites implementation on the home page and new sidebar. In addition, Reading List will now let users continuously scroll between articles without having to click. When you finish a page, keep scrolling to move on to the next page in your queue. Reader gets a bit of a makeover as well, including this new scroll-through feature for continuous reading.

A Shared Links section will let users browse links shared by friends on Twitter and LinkedIn. You can navigate these pages just as you would your Reading List.

Safari has also been given a giant under-the-hood overhaul, offering new speed and graphics acceleration. According to Apple, Safari will offer better process per tab architecture, power savings, and background tab optimisation. The new Safari will also use less memory usage, and less energy according to Apple. Apple revealed that SunSpider’s metrics clock Safari’s speeds as 1.44 times faster than Chrome; JSBench logs Safari at 3.8x against Chrome’s 1.5x. 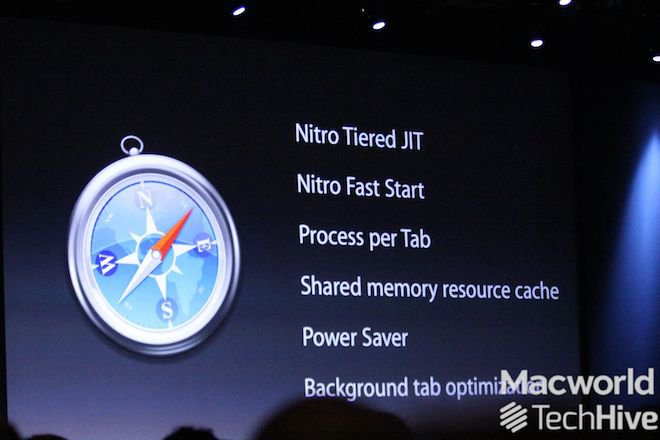 Notifications will be revamped in OS X Mavericks. New features will include the ability to quickly reply to notifications like Messages or Mail right in the notification, without even having to open the app.

When your Mac is sleeping, and you wake it up it will catch up on everything that’s been missed while the computer was closed, and it will update apps for you in the background. This sounds like Power Nap, a feature introduced in Mountain Lion that meant you could put your Mac (with Flash storage) to sleep and be sure that it would update itself and send backups to Time Capsule. 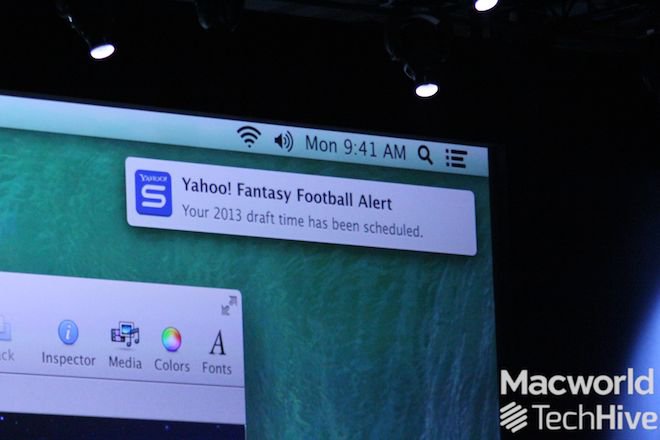 When Apple previewed Maps at WWDC last year everyone was impressed. Unfortunately that was short lived and when Apple launched the Maps service fans greeted it with dismay. Apple CEO Tim Cook even had to issue an apology. A year later and Maps has improved (in as much as most railway stations are now visible, and Colchester is no longer under cloud.)

Now Mac users can take advantage of Macs in OS X. This includes turn-by-turn directions, so users can click to send a route right to their iPhone.

We wonder about Maps’ application on a Mac, but it could make saving and sharing favourite routes and locations easier.

The inclusion of Maps will mean developers can embed the maps into their Mac applications using the MapKit framework. 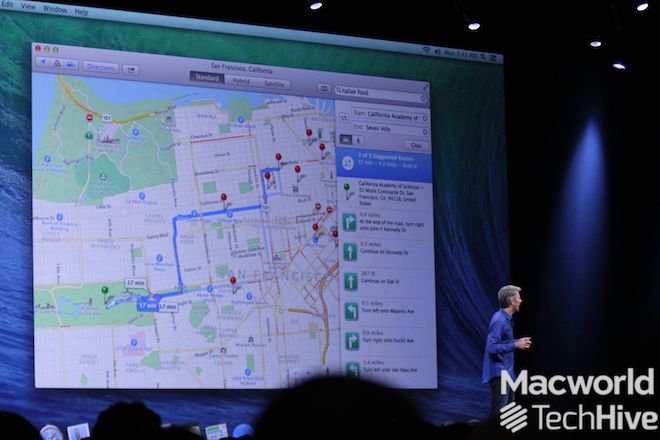 Despite Apple’s current spat with the Department of Justice Apple hasn’t steered clear of that issue. iBooks will come to the Mac with OS X Mavericks.

Your whole library from iOS devices will be available on your Mac as well as your iPad and iPhone, according to Apple.

iBooks for Mac includes all the features users have come to expect in the iBooks app on iOS, including full access to the iBookstore and your iCloud-synced user library. The bookshelves of iOS 6 are gone, leaving simple rows of cover titles in your library. The Mac app features a night mode for reading. And for students, the Mac app will feature study cards that can be flipped through. 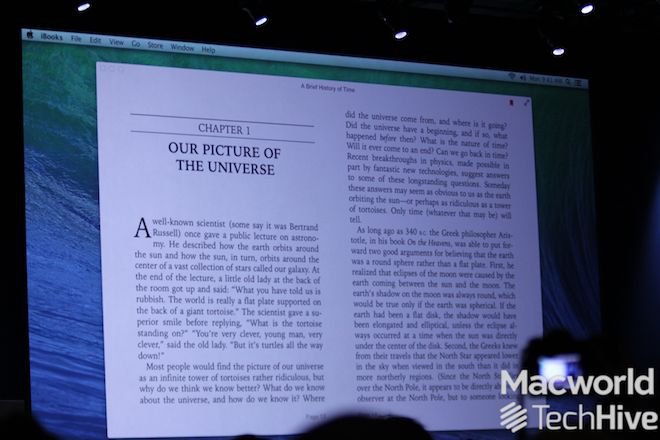 As expected Calendar has been revamped with a new look and feel. Calender was one app that was pulled up as an example of the hated skeuomorphism.

Along with a new look, Calendar now suggests locations nearby when you schedule lunch, and it will even give you weather for that location.

Calendar will also determine travel time and notify you when you need to leave. Who needs a PA? 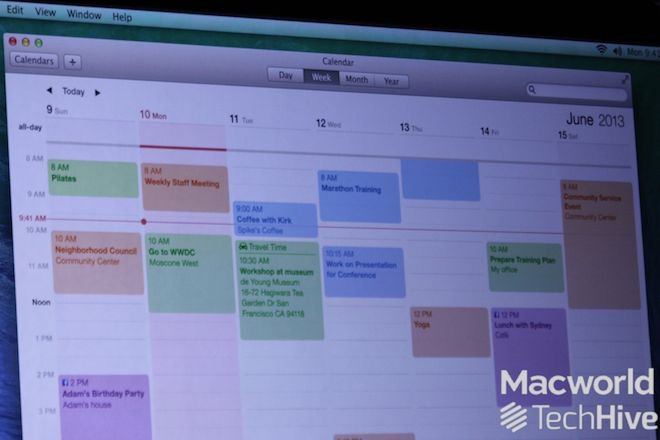 When will OS X 10.9 Mavericks launch?

Apple previewed Mountain Lion at WWDC last June and then launched the new OS on 25 July 2012. At the time Apple said that it was moving to an annual release for it’s operating system, and if it intends to maintain this promise then it would have launched OS X 10.9 Mavericks by the end of July.

However, Mountain Lion was with developers in February last year, and ready for launch in July. With developers only seeing the preview of the new OS X today a July launch clearly unlikely. In fact, Apple has confirmed that the final release of OS X Mavericks will come this autumn.