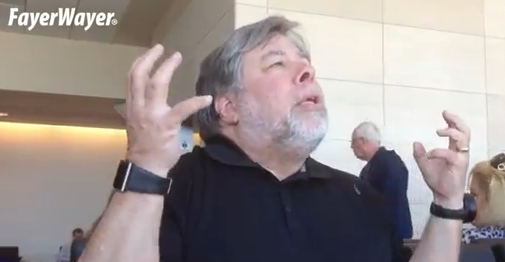 In his eyes, the US is no better than the Russia that he was taught about when growing up.

“When I was bought up I was taught that communist Russia was the ones that were going to kill us and bomb our country, and communist Russia was bad because they followed their people, they snooped on them, they arrested them, they put them in secret prisons, they disappeared them, these kind of things were part of Russia,” he told reporters from South American website, FayerWayer, adding: “We’re getting more and more like that.”

The FayerWayer reporters bumped into Woz at an airport on the way back from WWDC and asked him for his thoughts on the latest revelations in the NSA Prism surveillance program.

Wozniak continued: “There are laws that say we can just sort of secretly call anything terrorism, and do what we want.”

“There’s not even a free open court anymore,” he added.

Speaking about how his country has strayed so far from the bill of rights, Wozniak states: “That’s what a king does. A king goes out and has anyone rounded up and killed, or put in prison.”

(This being a king from history, or a modern-day dictator, we imagine).

Wozniak goes on to draw comparisons between Communist Russia and modern day America in terms of ownership of goods. “Nowadays in the digital world you can hardly own anything anymore, it’s all subscriptions, you’ve agreed that every right in the world belongs to them and you’ve got no rights,” he states.

“When we grew up ownership was what made America different to Russia. I get disturbed by these things that are going on,” Woz said.

Even worse is the fact that the powers that be have access to this stuff, as has emerged from the NSA scandal. Wozniak elaborated: “Anyone like [Edward Snowdon] sitting in a terminal could instantly go and grab all the data of anyone they felt like. No reports, no warrants, nobody having to approve it. There are a thousand people in the CIA they could jut sit and who ever they wanted go and look at – it could even be an ex girlfriend – and pull up everything. That sort of structure is wrong.”

The Guardian and Washington Post newspapers reported that major Internet companies were indiscriminately sharing customer data with the National Security Agency (NSA) via a program called Prism that gives the NSA “direct access” to those company’s servers.

Apple has denied any involvement in the program, saying that it first heard of the Prism program when it was asked about it.

Apple has however admitted that it received between 4,000 and 5,000 requests for customer data from US law enforcement between 1 December and 31 May this year.

Those requests came from federal, state and local authorities and included both criminal investigations and national security matters,” Apple said in a statement.

Most common are requests from police investigating robberies and other crimes as well as searching for missing children, trying to locate a patient with Alzheimer’s disease or hoping to prevent a suicide, Apple said.

“From time to time when we see inconsistencies or inaccuracies in a request, we will refuse to fulfill it,” Apple said.

“We don’t collect or maintain a mountain of personal details about our customers in the first place,” Apple said.