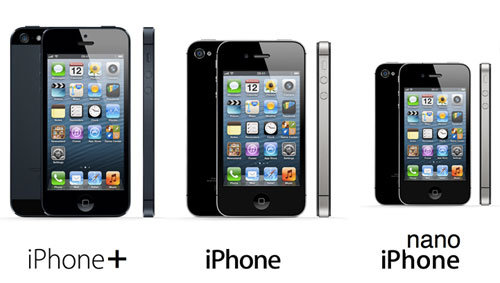 The rumour that Apple will launch an iPhone with a bigger screen has reared its head again.

This time the rumour was sparked by Reuters, who’s sources claim that Apple is actually developing two new iPhones with larger screen sizes for next year.

These screens will be 5.7in and 4.7in, although the source claims that Apple can’t make its mind up. “They constantly change product specifications almost to the final moment, so you’re not really sure whether this is the final prototype,” said one person with direct knowledge of the matter,” they told Reuters.

The phones are also going to come in a range of colours, according to the sources.

A cheaper, $99 (£63) handset will also be available, according to the report.

A lower prices handset is thought to be the answer to Apple’s winning over the emerging markets of China and India where phones are not subsidized as they are in western markets, leaving many potential smartphone customers opting for cheaper upfront smartphones as opposed to the Apple iPhone.

Reuters points to completion from Samsung and suggests that is the reason for Apple’s extra emphasis on screen size and differentiating colours.

A further report from The China Times also claimed that cheap versions of the iPhone would launch in August (although it was under the impression that Apple would make an announcement during WWDC).

That report, published on 10 June, claims that component makers report that Apple has pulled the cheap iPhone into “intensive delivery” suggesting that the manufacturer has been speed up.