The richer the area, the higher iPhone use tends to be, whereas Google Android devices show greater use in poor regions. That’s according to a map-plotting program that explores Twitter use across the globe by mobile operating system.

AppleInsider has been playing with MapBox, which charts tweet locations. The site found that in the US, iPhone use was particularly strong in cities, but Android showed slightly higher use in rural areas. And looking at the continent’s Twitter use more broadly, iOS showed up more frequently in the US and Canada compared to a strong showing by Android in Mexico.

We checked out Europe in search of a similar pattern. On a national level, interestingly enough, Spain shows a totally different pattern to the UK, with BlackBerry performing strongly in Madrid, Android playing well in the smaller towns and iPhone making little headway. Belgium and the Netherlands have similarly high Android use outside the largest metropolitan areas. 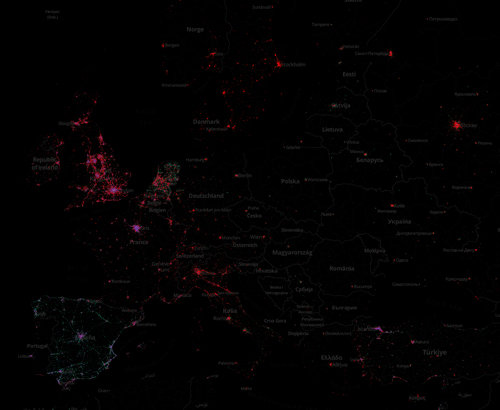 If it’s hard to make out, Spain’s outline is visible at the lower left, with mostly green (Android) and purple (BlackBerry). The big red spot at the top right is Moscow.

Scandinavia, on the other hand, seems totally in thrall to the iPhone, as does Northern Italy.

BlackBerry still looks pretty good in Britain – understandably central London retains high BlackBerry use among businesspeople – and (in Paris at least) France. East Paris shows lots of Android use, which fits in with the US data – East Paris is generally less affluent than the West. (Thanks to Kirk McElhearn for the Paris knowledge!)

And Turkey, interestingly enough, is plastered in BlackBerry purple wherever smartphone use is high. 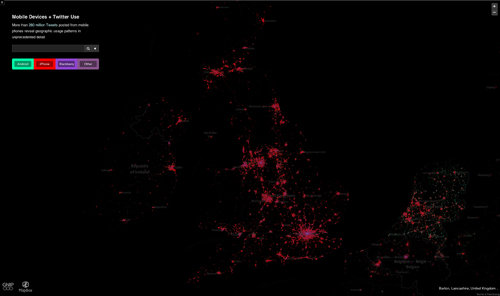 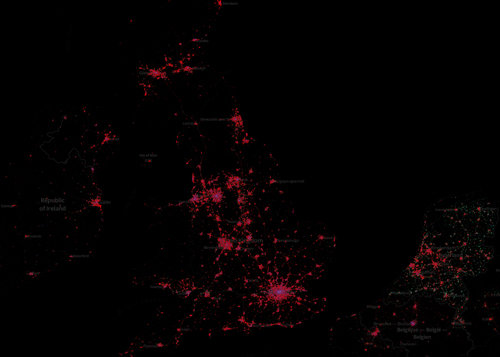 Here’s the UK pattern. Look at the amount of red (iPhone) throughout Britain, compared with the green (Android) sprinklings across Belgium and the Netherlands

Look for your own patterns using the MapBox system, and let us know your findings in the comments.

Google: ‘Our iOS Maps app is better than Google Maps for Android’