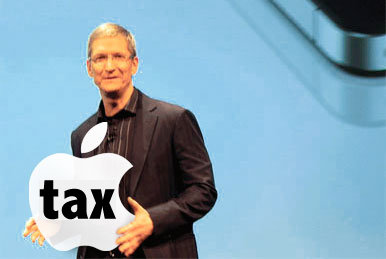 Apple’s had its knuckles rapped in the US over its tax practices, but that doesn’t appear to have made the company any more keen on paying taxes in the UK and now its latest filing has revealed that Apple paid no UK corporation tax in 2012.

The company has just filed the corporate results for its UK subsidiaries at Companies House – and that is where the data has come from.

According to the FT, the tax reported by the UK subsidiaries in the previous year was £11.4m, but in 2012 Apple paid no UK corporation tax.

Tax deductions from employee share schemes (worth £27.7m) helped wipe out the corporate tax liabilities of the UK subsidiaries in the year to September 2012.

Forbes highlights that Apple Retail UK Ltd made a pre-tax profit of £16m on sales of almost £1bn in the year to 29 September.

In addition, Apple (UK) Ltd, made a pre-tax profit of £43.8m on sales of £93m, according to accounts filed at Companies House.

And, Apple Europe made a pre-tax profit of £8m.

According to the Forbes report: “Apple offset tax deductions relating to share schemes of £27.7m against its corporation tax liabilities in the UK. The move also enabled it to claim a tax credit of £3.8m to carry forward to future years.”

However, Apple isn’t actually doing anything ‘wrong’. Everything is within the letter of the law, explains Forbes.

For example, notes Forbes, iTunes sales are made in Luxembourg (where VAT is lower) and in the case of electronic services. Since VAT is paid in the country the sales emanate from UK residents actually save money because they are not paying VAT at 20%.

How Apple does business

Then there is the way Apple does business in its territories outside the US. Forbes explains the complex method Apple uses: the company buys equipment from manufacturers in China through its Irish company. It then sells the equipment to dealers and distributors or the Apple Stores. Apparently the stores don’t make much money, according to Forbes. This means that “real profit thus ends up in that Irish company and is taxed in Ireland,” according to the report.

Except that: “Ireland only taxes corporate profits on economic activity that takes place in Ireland,” explains Forbes.

Since Apple doesn’t take profits made in Ireland back to the US, there is no US corporate income tax to pay either.

The FT reports that in 2011 84% of Apple’s non-US operating income was booked in one of its Irish subsidiaries, and it paid just 0.05% on that.

“That’s the way the politicians wrote the system so it’s a bit odd to blame people for following the rules,” writes Forbes.

Why Apple doesn’t pay tax in the UK

And, according to the FT, Apple’s UK audience accounted for less than 10% of overall sales.

Regarding the fact that Apple offset tax deductions relating to share schemes of £27.7m against its corporation tax liabilities in the UK, Forbes explains: “Issuing stock to the management is a part of doing business”, it is an “allowable expense” and “something that every company does.”

Apple came face to face with the US senate in May when it was questioned over its tax practices.

Apple CEO Tim Cook defended the company before a Senate subcommittee, saying that Apple uses no “tax gimmicks” in assigning about two-thirds of its worldwide profits to three subsidiaries in Ireland, where the company has negotiated a corporate income tax rate of less than 2 percent.

The company has been under fire for its tax practices for some time. Last year a New York Times report claimed that Apple uses offices in states other than California, where it’s headquartered, and countries outside the US to help minimize its overall tax burden.

The report pointed to Apple’s subsidiaries in Luxembourg, Ireland and the British Virgin Islands, and claimed that some are “some little more than a letterbox or an anonymous office – that help cut the taxes it pays around the world.”

“Apple was a pioneer of an accounting technique known as the ‘Double Irish With a Dutch Sandwich,’ which reduces taxes by routing profits through Irish subsidiaries and the Netherlands and then to the Caribbean,” claimed the report, a practice that it claims is now imitated by a number of companies.

Back in February, the British, French and German governments launched a joint initiative to crack down on tax avoidance and stop big firms that “country-hop to pay less tax”.

Apple ‘should win an award’: Senator sounds off on Twitter