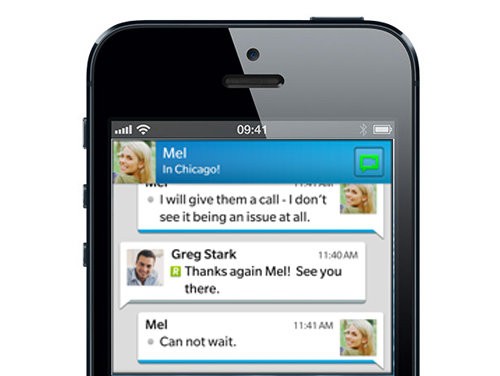 Since the summer there have been claims that BBM was coming to the iPhone, and many a predicted launch date passed without any instant messaging service launch. Well news is now in that Blackberry has made BBM available for iOS at long last, question is, does anyone really care? 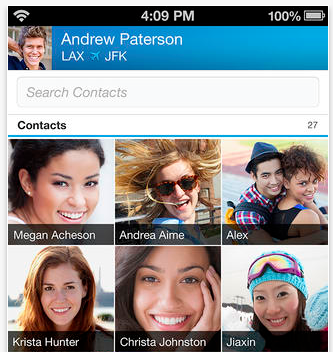 If you are trying to decide whether to buy a new iPhone 5S or iPhone 5c, or buy one of those other smartphones, one of the factors affecting your decision may be whether the BBM instant messaging service from BlackBerry will be avaiable on the iPhone. Now you can rest assured that the service will be available – you may have to wait a while before you can download it though, after the problems Blackberry experienced last time it tried to launch BBM for iPhone, the company is only allowing a few people to update at a time. Basically there is a waiting list.

According to Blackberry you will be able to:

Chat with friends on iPhone and other smartphones •BBM lets you protect your privacy. You control it. •Chat and share with many at once. •Create your own BBM profile.

Chat with friends on iPhone and other smartphones: •BBM is always on and always connected – no app to open •Know when messages have been delivered (D’s) and read (R’s) •Share photos, files, documents, voice notes and more •See when contacts are responding to your message •Emoticons for every mood and emotion let you express yourself

BBM lets you protect your privacy. You control it: •You chose how to share your information – BBM uses PINs instead of phone numbers or email addresses so that it’s more private, and you always control who can contact you •You chose your contacts – 2-way opt-in means you have control over who is able to message you

Chat and Share with many at once: •Groups – BBM groups help you share pictures, lists, and appointments with group members. You can even be in a group with people who aren’t part of your own BBM contact list. •Multi-person chats – Invite multiple contacts to have a chat together. •Broadcast messages – Send a message to multiple BBM contacts at one time.

Create your own BBM profile: •Post a profile picture using images, pictures or even animated pictures (GIFs). •Update your status to let people know what you’re up to or how you feel

Is BBM coming out on the iPhone?

Earlier this year I was asked this question and my reaction was that there was no way that BlackBerry would be making BBM available for the iPhone. Well now it’s clear that I was wrong, BBM is available for iPhone… You can download BBM for Blackberry from iTunes here.

Back in May BlackBerry announced that it would make the popular BBM service available to iPhone (and Android) users. BlackBerry seems to have decided that if you can’t beat them you might has well join them.

Why did it take so long for BBM to launch for iPhone?

Beleaguered BlackBerry seems to have had a spot of bother getting BBM on the iPhone, despite promising earlier this summer that it was coming soon it has taken months.

It was expected that BlackBerry would launch BBM for iPhone and Android on 21 September, the day after the new iPhone 5s and iPhone 5c launched, however, while the app is said to have been sighted in the wild (apparently it made it onto the Australian app store briefly), the rollout was halted.

No reason for the delay was given, although BlackBerry tweeted from it’s BBM feed on the 30 September that it is “Still 100% committed to bringing #BBM to Android and iPhone. Sign up at BBM.com to know when #BBM4All”

One reason for the delay could be the fact at the same time as the iPhone 5c and iPhone 5s went on sale, BlackBerry agreed to go private in a $4.7 billion deal with Fairfax Holdings Limited. To put this figure in perspective, given that Apple sold 9 million iPhones that weekend, and it is estimated that Apple would have made $5 billion in revenue  from those sales, Apple would have generated more money from sales of the iPhone that weekend than BlackBerry was valued at.

According to reports BBM for iPhone was submitted to Apple for review at the end of August. In mid September reports were suggesting that Blackberry would have its BBM service ready to launch on the iPhone on Saturday 21 September, the day after the new iPhone 5s and iPhone 5c launch, however, nothing materialised.

When it made the announcement that BBM would be made available for iPhone, BlackBerry said that it would be available “this summer”. That timing is “subject to approval by the Apple Store”. Our best guess is late summer, although it’s possible that Apple will not approve the BBM app, ever.

It looked for a few minutes on 29 August that Blackberry’s BBM messaging service had arrived on Apple’s iOS for iPhones.

On 29 August the landing page of Blackberry’s website showed a banner that read: “BBM FOR ANDROID AND IPHONE IS HERE,” and links to download the apps.

However, the ‘launch’ was short lived as the download links were dead and the banner has since disappeared.

It does suggest that the launch won’t be far away. Perhaps we can expect to hear news around the time of the rumoured Apple event on 10 September.

How much will BBM for iPhone cost?

BlackBerry said that the BBM app will be free and indeed BBM for iPhone is free.

Why is BlackBerry bringing BBM to the iPhone

It is likely that this is BlackBerry’s attempt to retain the customers it still has by giving them the ability to communicate with the ever-growing pool of non-BlackBerry users within their preferred messaging app.

Will BBM on the iPhone be the same as the BlackBerry service?

BBM will initially offer text messaging only for the iOS and Android operating systems, with features such as voice and video and screen sharing coming later in 2013. The company announced that a BBM feature called channels will allow Twitter-like functionality.

It is likely that the BlackBerry phones will have an enhanced BBM service compared to the iOS and Android versions.

There are a number of options if you want to send messages to your friends from your iPhone. Apple’s phone comes with its own Messages app already installed, and this allows you to send messages for free over a data connection or Wi-Fi, however these free messages can only be sent to other iOS users, so a number of other apps have appeared making it possible to send free messages to other platforms. We round up some of the options below.

Messages comes preinstalled on your iPhone and with it, iMessage, a free service that lets your send messages vis Wi-FI or a 3G data service. You can send group iMessages to other iOS users and iMessages can also be received on your iPad and Mac.

Whatsapp is Apple’s number one paid app so there is no doubt that it is popular. It’s a cross-platform smartphone messenger that sends messages over Wi-Fi and 3G, much like iMessage. The app used to be free but now it costs 69p. The one issue is that the message won’t be sent if you have no data connection – iMessage would use SMS to send the message in that case. 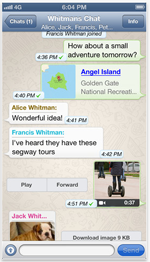 Most people have Facebook installed on their phone so using the Messages service is an easy way to contact your friends. You can get messages, chats and texts and see your message history. 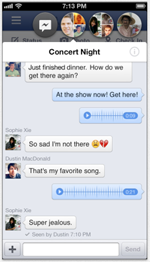 As well as letting you place free video calls Skype has an instant messaging service. However you need Skype Credit or a subscription to the service. 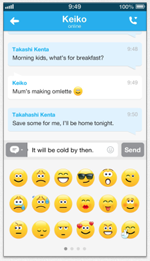 Kik Messenger lets you send notes to other Kik users on multiple platforms. It doesn’t have all the features of WhatsApp but it does have some interactive features that make it easy to access YouTube videos and memes. 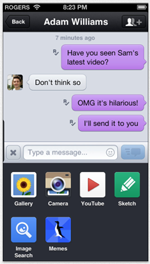 Snapchat isn’t a text messaging service, it allows users to share pictures, and it’s incredibly popular. Pictures are sent via Snapchat ‘self destruct’ shortly after being opened. This means that they will only be visible for a few seconds, the recipient can’t even take a screen grab of said image. 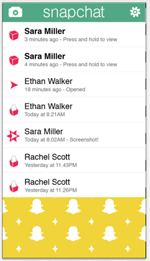 As for BBM. We know that the BlackBerry BBM messaging service was used in the UK summer riots of 2011, with rioters using the secure communications network to share information about where looters were, safe routes home, and avoiding the police. So it has already proven popular with one market at least.