Following its recently released trailer, Jobs, the independent biopic of the late Apple co-founder Steve Jobs, now has a new movie poster that uses the colour palette from the original Apple logo. 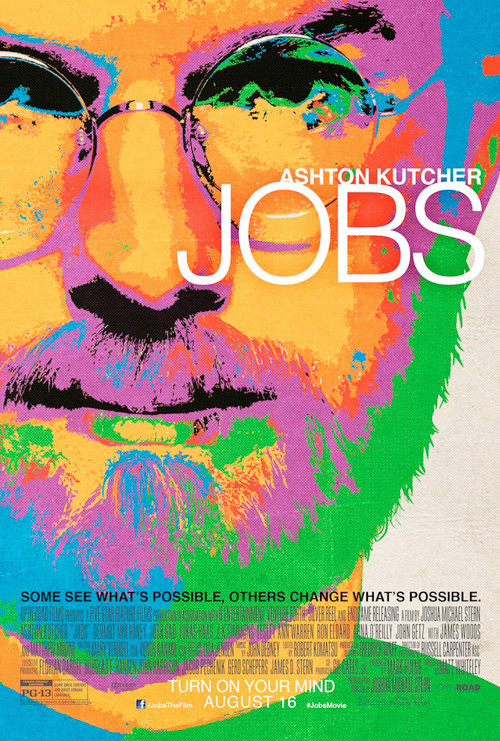 The poster features a very Jobs-like Ashton Kutcher, complete with round-framed spectacles and a beard, and sports the tagline: “Some see what’s possible, others change what’s possible.”

The movie synopsis, which has also been updated, reads as follows: “It only takes one person to start a revolution. The extraordinary story of Steve Jobs, the original innovator and ground-breaking entrepreneur who let nothing stand in the way of greatness. The film tells the epic and turbulent story of Jobs as he blazed a trail that changed technology – and the world – forever.”

Jobs is set to hit cinemas on 16 August.

The film premiered in January during the Sundance Film Festival, where it was met with mixed reviews and was criticised by Apple co-founder Steve Wozniak. The first trailer for the film wasn’t received well either.

A third Steve Jobs movie based on Walter Isaacson’s official biography is expected from Sony at some point next year. The Social Network screenplay writer Aaron Sorkin has adapted the biography, and is said to have written the film in a three-scene structure set backstage at keynotes.

See: Aaron Sorkin speaks about Steve Jobs movie, hopes ‘to do it justice’

You can watch the trailer for Jobs below:

Meanwhile, The Internship, starring Owen Wilson and Vince Vaughn, is showing in cinemas now, and follows the story of two salesmen that find themselves competing for a position at Google. Have patent battles and market share wars expanded to competition over films?