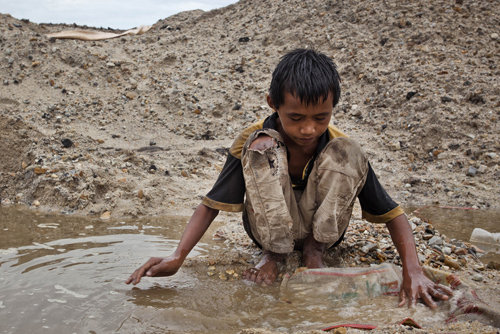 Friends of the Earth activists are heading to Apple Stores this weekend to raise awareness of the plight of Indonesian islands affected by the mining of tin used in Apple’s iPad and iPhone.

The Friends of the Earth is accusing Apple of “destroying tropical forests, killing coral and wrecking the lives of communities in Indonesia”.

In the latest campaign by the environmental activists the ecowarriors are visiting Apple Stores this weekend to raise awareness among customers.

The ecowarriors have been campaigning for Apple to admit that its products contain tin from Bangka and neighbouring Indonesian islands for months. The green activists first alerted Macworld to the issue back in February and we wrote Apple accused of ‘trashing’ Indonesia thanks to use of tin in iPad and iPhone.

Friends of the Earth claims that due to the “Dangerous and unregulated” tin mining on Bangka, in 2011 an “average of one miner a week died in an accident”.

The activists also claim coral and sea life is threatened due to silt from tin mining, which they claim is “killing coral reefs and seagrass eaten by turtles, driving away fish and ruining fishermen’s livelihoods”.

In addition soil has become acidic after the destruction of forests for tin mining, making conditions difficult for farmers.

Friends of the Earth’s Policy and Campaigns Director Craig Bennett has written to Apple CEO Tim Cook alerting him to the issues.

According to Friends of the Earth, the average tablet weighs 650g and contains 1.3g of tin-rich solder.

The organisation claims that all electronic gadgets contain tin-rich solder, an alloy of at least 95% tin with a little silver and copper, to hold together resistors, transistors and circuit boards.

Almost half of all mined tin is turned into solder for the electronics industry. Around a third of the world’s tin is from the Indonesian islands of Bangka and Belitung, claims Friends of the Earth.