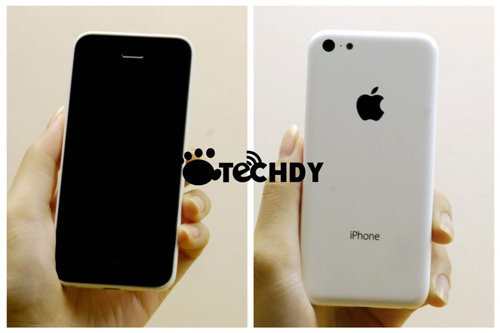 Images of a plastic “budget” iPhone have emerged online recently. While a lower-cost model might appeal to many, Apple Insider has deemed the images, posted by accessory reseller Techdy on its blog, as fake or incorrect. Techdy claims to have one of the plastic iPhones and states that the device has 4-inch display like the iPhone 5.

What makes the legitimacy of these pictures questionable is that there are no outer buttons on the plastic iPhone whereas the iPhone 5 has four. Apple Insider has reasoned that ‘the sample is either an early working prototype, or, more likely, has been fabricated out of whole cloth’, because of the lack of buttons.

Another reason to doubt the reliability of the source is that Techdy does not have a long history of breaking Apple news, and in fact has only been in business since April, with an open-source game controller for the iPad mini. The only factor that implies that the claims may be true is that one of Techdy’s founders, M.I.C. Gadget’s Chris Chang, has some history in reporting on Apple’s Far East movements.

The photographs of the alleged budget iPhone look identical to a budget Android model, or Basic Bear, that Techdy currently sells for $199. For your money you get a 4-inch phone with the iPhone 5’s 1136 x 640 resolution, a 1.7GHz quad-core Snapdragon processor, 16GB of internal storage and Android 4.2.1. HTC One knockoffs are also available from the site, named Bear Pro, for $249. Techdy says that initial production runs of both phones are not going to be shipped until September 1 and only 100 units will be made for the first run.

The release of a cheaper iPhone has been rumored and predicted for over a year, as the demand is high. The iPhone is a fantastic piece of kit, but it’s fairly expensive; a cheaper iPhone would be fantastically popular with people who want to buy into the iPhone experience, but don’t feel they can afford or justify a full iPhone.

It is also impossible for Apple to ignore that Android has the edge on price, a new iPhone 5 handset, the latest iPhone model, will cost you over £500 whereas you can buy an Android phone for as little as £119. As one of its main competitors, Apple needs to step up and cut prices or offer products as cheap as Android’s if it wants to dominate the market. Analysts said earlier in the year, “The low-end iPhone will have the same 4in form factor as the iPhone 5, but will have a plastic casing and a non-Retina display. With a lower price point, AAPL will be able to target a growing and important part of the smartphone market (sub-$400 price band).”

Should I buy an iPhone 5 or wait for iPhone 5S, iPhone 6?