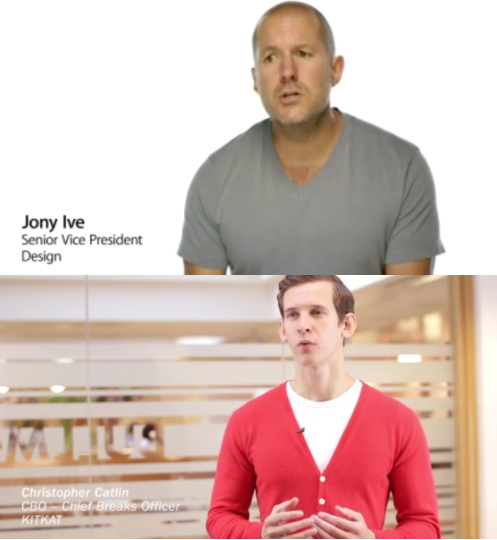 With the unveiling of Android KitKat 4.4, KitKat (the chocolate biscuit) has released a spoof advert which seems to be making fun out of Apple’s Jony Ive and the rest of the team. Are we looking at another court battle?

As you may know, whenever Apple make a new product they also film a well thought out advert; taking us on a tour of the device and mentioning the key features. KitKat seem to have taken the idea and created their own spoof advert as an act of mockery towards Apple.

The advert shows not an actual phone with the new Android OS, but a KitKat bar, it features very similar music and introduces the product in the same way as Apple. Both of the companies use long words to describe their product. This is Android’s: “At an extremely unequivocal 10mm thick, one finger long and four fingers wide, KitKat 4.4 is the perfect second screen companion.” and this is a similar part of Apple’s speech: “… It’s actually 18% thinner and 20% lighter than the previous iPhone. It took an incredible cross collaborative effort to do this.”

‘Christopher Catlin, the Chief Breaks Officer’ speaks in a soft tone and shows off the new ‘product’ with excitement: “Every corner, every edge, every finger of every bar has been carefully considered and crafted to create a beautifully immersive and multisensory experience.” Now, who does this remind you of?

Here are the links to Apple’s and KitKat‘s adverts.

To everyone’s surprise, Nokia had a go at the mocking game too. Their German Twitter account posted the picture shown below; which shows the phrase: “Have a break, have a…” and a picture of a snapped in half Samsung Galaxy S4.

This isn’t the first time that a company has imitated Apple. Somersby Cider made an advert in which customers were seen queuing to enter the store; which looked very much, if not exactly like one of Apple’s stores. The ad obviously featured cider, which people treated like one of Apple’s devices; for example mentioning that it’s wireless and that it can be docked in “your normal docking system” which was referring to your hands.

As of now, two well known companies have had a go at imitating Apple. So, who will be next?

Marcelina Zwegrodzka is the author of this Apple  blog.