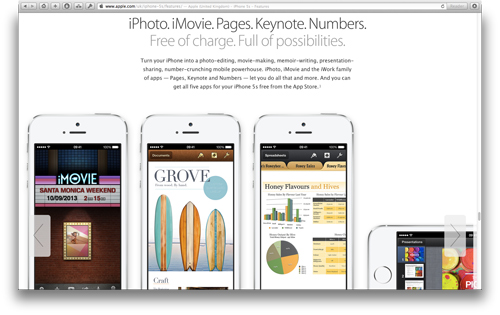 One of the best things to come out of Apple’s 12 September keynote yesterday was the news that Apple’s suite of iLife and iWork apps will finally be available to download for free, what’s not clear is whether they will be available only to new iPhone users, or if anyone with an iPhone or iPad will be able to take advantage and download the free Apple apps.

Read next: How to get Pages, Numbers, Keynote, iMovie, GarageBand on iPad & iPhone for free

Up until now iMovie, iPhoto, Pages, Numbers and Keynote have only been available to buy from the iTunes App Store with prices ranging from £2.99 to £6.99 each, depending on the app.

What’s not clear yet is whether the apps will available free to anyone who downloads and installs iOS 7 on their current iPhone, iPad or iPod touch. Or whether the free apps will only be available to owners of the new iPhone 5S, iPhone 5C as well as future iPads and iPod touches.

However, in the small print on Apple’s website it states: “iPhoto, iMovie, Keynote, Pages, and Numbers are free on the App Store for qualifying iOS 7 compatible devices activated after September 1, 2013.”

What we do know is that the option to download the five iLife and iWorks apps began appearing in developers builds of iOS 7 as far back as July. Developers reported that the apps pop up alongside other free apps such as iBooks when you first activate your device using the new OS.

However the new iPhone page on Apple’s website currently reads:

“Turn your iPhone into a photo-editing, movie-making, memoir-writing, presentation-sharing, number-crunching mobile powerhouse. iPhoto. iMovie and the Work family of apps – Pages, Keynote and Numbers, lets you do all that and more…”

And here’s the potentially significant bit:

We’ve asked Apple to confirm whether the apps will be available for everyone to download for free and will let you now as soon as we here.

What is iLife and iWork?

For those who don’t know, the iLife apps – iMovie and iPhoto – give you a quick and easy way to edit and share movies shot on your iOS device with family and friends – and they’re ideal companions for the imaging features Apple is bringing to iOS 7, especially on the iPhone 5S.

The iWork apps – Keynote, Numbers and Pages – are the Apple-made equivalent of productivity apps like MS Office or Google Apps. Keynote is a great for putting together professional-looking presentations; Numbers is an accomplished and easy-to-use spreadsheet app and Pages doubles as a top-tier word processor and a document layout tool.

While giving free versions of its iLife apps away isn’t particularly big news – Apple’s been giving away the Mac equivalents with new laptops and desktops for years, the iWork push is significant, especially as Apple recently released beta versions of iWork for iCloud.

is free iWork a risk for Microsoft?

By putting Keynote, Numbers and Pages in front of millions more people than ever before – and for free – Apple is clearly aiming to disrupt the productivity software market and potentially unseat encumbents like Microsoft Office and Google Apps.

Team the iOS freebies with document syncing across all your devices using iCloud – and the launch of the platform-agnostic iWork in the Cloud service, and it’s clear that Apple has the means and the install base to do exactly that. Whether it will succeed or not is anyone’s guess.