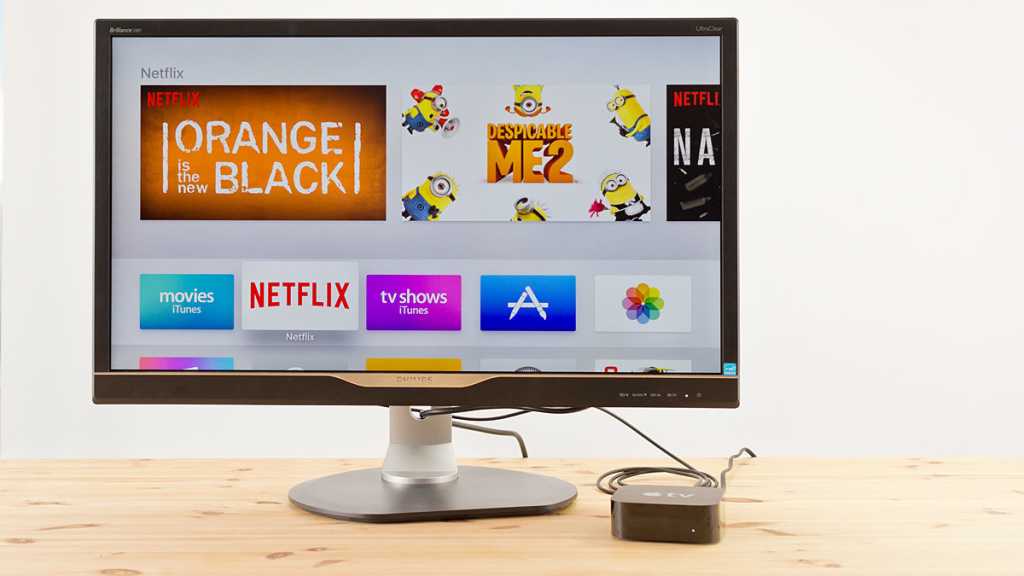 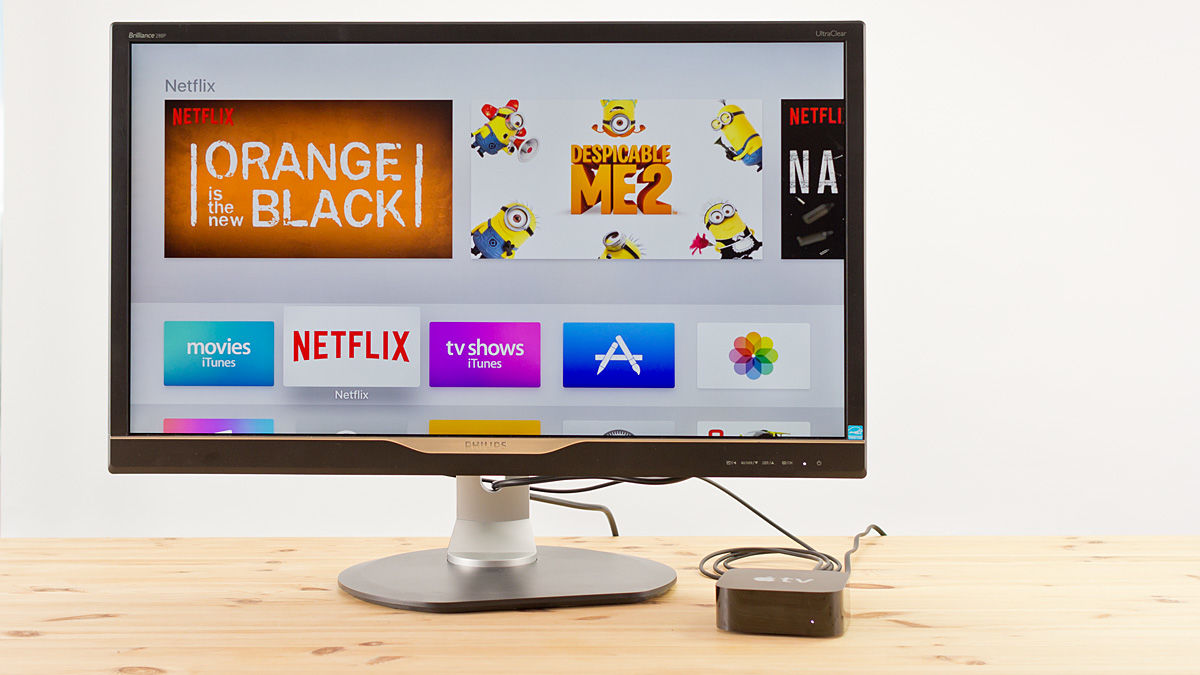 The iPhone is a powerful handheld device that enables you to view, edit and play many of the files you’d normally see on a computer. You can take photographs, watch videos, play music and create business documents right from the palm of your hand. But although even the iPhone X has its gorgeous 5.8in display and an immaculate stereo speaker setup, there are times when you want to send its audio or video to a really big screen.

Apple has a technology called AirPlay that enables you to do just this. You can play music wirelessly from your iPhone on an AirPlay speaker; or play video stored on your iPhone on a television set using an Apple TV.

In this article we explain what AirPlay is, and how to use the wireless technology on an iPhone or iPad. If you’re having problems with the technology, you may also be interested in our guide to AirPlay troubleshooting.

Essentially, AirPlay works via Wi-Fi, connecting AirPlay-compatible devices together, allowing you to wirelessly stream music amongst other things. There are two kinds of receiver: an AirPlay Speaker (which now includes the HomePod), or an Apple TV. While the AirPlay speaker will provide users with wireless audio playback, we’d argue that AirPlay doesn’t really step into its own until used with an Apple TV.

Sure, you can still stream your favourite tunes from your iPhone or iPad to your Apple TV wirelessly, but it doesn’t stop there. You can also use AirPlay to perform tasks like displaying photos and from your Photos app, playing the latest movies from Netflix and even mirroring your entire display on the TV with minimal delay (although this will rely on your internet connection holding up)

The addition of an Apple TV can turn any ‘dumb’ TV into a smart one, and if you haven’t got one already, you can pick one up from Apple starting at £149 or $149.

AirPlay 2 is the first major update to the AirPlay standard, and was announced at WWDC in summer 2017 – but as of 23 Apr 2018 it still hasn’t launched to the general public. We hope that will change soon, and we’re pleased to report that it looks like it will.

AirPlay 2 was included in the first two betas of iOS 11.3 (and its companion tvOS 11.3) but as of the third beta it had vanished. We’ve now seen the first beta of iOS 11.4, and it’s back again, with an additional feature. AirPlay 2 in iOS 11.4 beta also enables you to control the volume of speakers in different rooms separately, which wasn’t possible in the version in early betas of iOS 11.3.

The important difference between AirPlay and AirPlay 2 is that the new version supports multi-room streaming: you can stream a song from your iPhone to two separate Apple TVs in two separate rooms, for instance. This is the sort of functionality Sonos has offered for years, and it’s frankly about time that Apple caught up. (While you wait, take a look at our roundup of the best multi-room speakers!)

The HomePod, Apple’s smart speaker and its challenger to Sonos as well as to smart speakers from the likes of Google and Amazon, caused a mild stir when it emerged that it would not support multi-room audio when launched, although Apple did insist that this feature would be added later in 2018. (The first beta of iOS 11.4 does add the ability to connect two HomePods for stereo sound.)

How to use AirPlay

As long as you’ve got an Apple TV or AirPlay-enabled speaker, here’s how to use AirPlay in iOS 11.

If you want music, photos or videos to be displayed elsewhere, you’ll need to connect to AirPlay. The way you do this varies from app to app, but you’ll generally be looking for a button labelled AirPlay or Screen Mirroring, or an AirPlay logo (a triangle with circular waves emanating from its tip, or a triangle with a square at the top).

In Music, for instance, the AirPlay logo sits at the bottom of the Now Playing page. Tap this and select a target device to stream the music to. 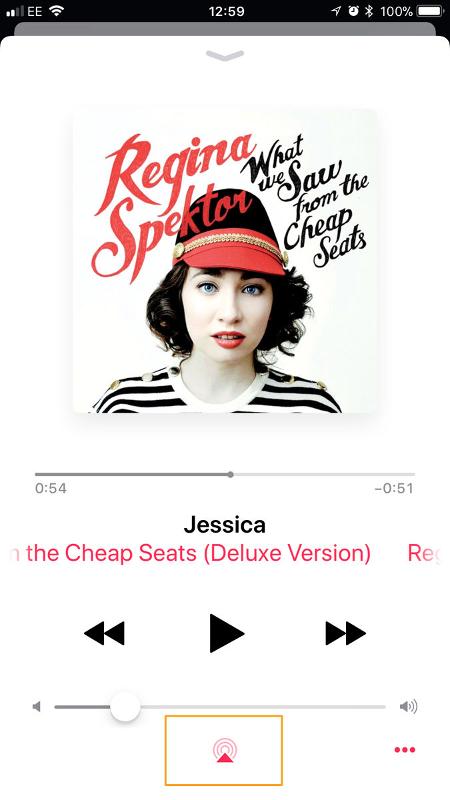 In some other apps, such as Photos, you’ll need to tap the Sharing button – that’s the square with an arrow pointing out of it. Then tap AirPlay and select a device.

To connect to AirPlay from outside individual apps, you can open Control Centre by swiping up from the bottom of the display. Now tap Screen Mirroring, and select a target device, whether speaker or Apple TV. 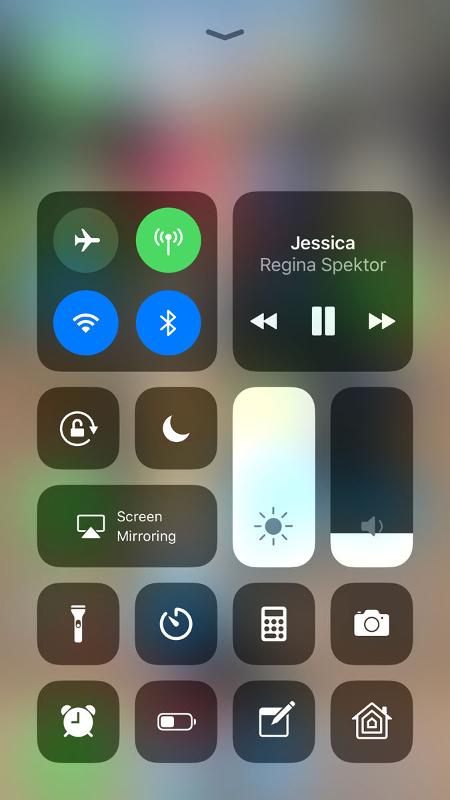 As well as being able to mirror any media from your iPhone, iPad or Mac to your Apple TV or AirPlay-enabled speaker, you can also mirror your entire display to a television connected to an Apple TV. This allows users to play games on the big screen, show multiple people how to perform an iOS-specific task and more, and is fairly easy to set up.

Simply swipe up to access the Control Centre, tap Screen Mirroring and select the target device. Your iOS display should then appear on your TV.

The interface is a little different in iOS 10 and different again in iOS 9 and earlier.

As before, you should start by opening Control Centre by swiping up from the bottom of the display. In iOS 10 there are two screens within Control Centre, so you should swipe left to access the media controls. Now tap the output icon (triangle with radiating circles) and select the device you want to send it to. 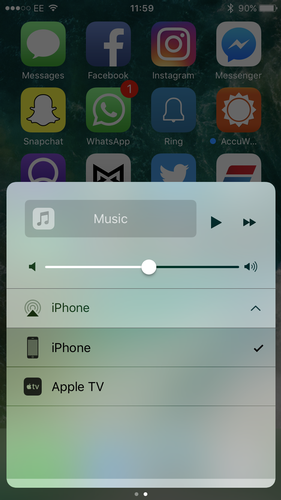 To mirror your display, swipe up to access the Control Centre, tap AirPlay and select the device you want to use. 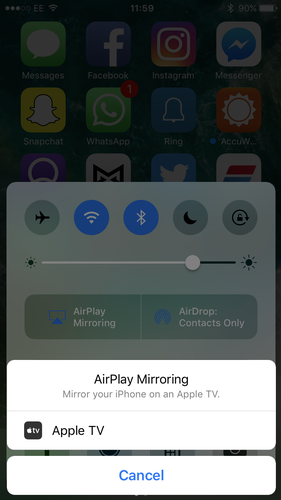 If you’re running iOS 9 or earlier, you’ll need to be aware of one or two further differences.

Those running iOS 9 or earlier need only access the Control Centre, tap AirPlay and select the device to send your audio/video to your chosen device. Whatever is playing through your device, be it music from Spotify or a movie from Netflix, will then be transmitted wirelessly to your TV or speaker.

It’s worth noting that if it’s the first time you’re connecting to the Apple TV via AirPlay, you’ll be asked to input a code that’s displayed on the TV. 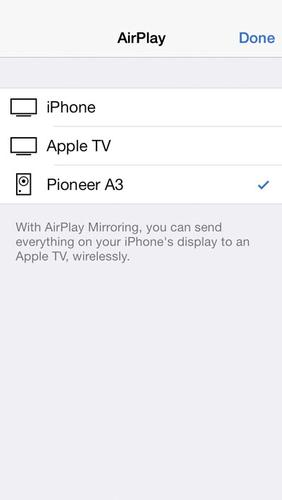 The process for mirroring your display in iOS 9 or earlier is almost the exact same as in iOS 10, but with one extra step. As with iOS 10, swipe up to access the Control Centre, tap AirPlay, select the device you’d like to mirror your display to and make sure that ‘Mirroring’ is toggled on.