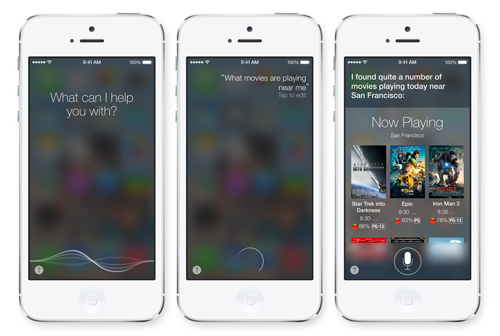 Apple’s voice-recognition based personal assistant Siri has been in beta for the last two years, and has remained as such until the recent launch of iOS 7. Although voice recognition software itself has been around for some time, it has not been developed effectively to the extent where it can be applied to practical, everyday use, until very recently. Now, with the advent of iOS 7, what features can Siri users expect, and how much has changed from the apps first appearance on the iPhone 4s, a whole two long years ago?

Read The 10 worst Siri annoyances, and how to fix them

Subsequent to Apple’s purchase of the start-up voice recognition software company SIRI in 2009, for $120m, Apple would go on to implement a voice operated ease of access system to the iPhone’s (and subsequently the new iPad’s) internal content. This web-based application could provide access to information on the internet through Safari, locate places of interest on Maps, conveniently set reminders and dates, and instantly message and call your contacts. All of this can be conducted via a simple voice command – albeit to a slightly pompous sounding automated service.

With obvious benefits to those with limited motor function, or impaired sight, Siri’s original release on the 4s offered an alternative to the original iPhone 3g voice command service, and it has been celebrated as a humorous and efficient extension of the ‘voice’ of Apple itself.

Besides the app’s usefulness and functionality, Apple has also insisted that Siri includes a personal identification directive, which eventually becomes more familiar to the users voice over time. Apple want to give Siri personality too, and as a result, the service comes packed with Easter-eggs, such as the vastly web-documented number of jokes and anecdotes to ask it, and is now in a position where it can personally belittle the competition, such as Google Glass.

Sadly, Siri has not had a seamless transition out of beta. The app has repeatedly come under fire for misguided and underequipped responses, and in the last two years, Apple has been privy to legal disputes over Siri’s shortfalls and teething troubles.

With the initial release on iOS 5, users found that beside the novelty of knock-knock jokes, and the ability to find out arbitrary information like: “What’s the weather like tomorrow in Paris, France?”, and despite the fact that the automated assistant had a good level of familiarity with the other apps on the device, it could not provide directions, and replied with a foggy answer that required an unbearably long wait to process.

Inadequate 3G data connections may have been in part responsible for some of these long-winded response times, as the cellular data provision itself was still fairly new, but it was mostly as a result of the assistant’s inability to interpret dialectal and the cognitive inflections and phrasing. In the US, some users had begun legal proceedings with Apple, feeling they had been mis-sold the product, and this was largely due to Apple’s allegedly reprehensible marketing strategies, which at the time the Wall Street Journal labelled as: “(a) misleading and deceptive message.” Worldwide, people were claiming the adverts made requests made Siri look effortless, and exaggerated the capabilities of the product.

Apple’s answer to these legal disputes was to firstly produce a new set of adverts, that this time reminded the viewer that response times were sped up and produced varied responses, dependent on the network the phone was on. Apple’s second MO was to work on Siri’s language processing, and improve the response time. By iOS 6, loading time for these responses had greatly improved, and as Siri is a web-based application, 4G was helping to return more refined results, and in a shorter space of time. Siri was now able to better interact with location services to provide directions for drivers, locate your fellow iPhone using friends, and was even able to tell you when and where films were on, and whether they were worth watching. Besides this, better integration with third party services including Facebook and Twitter were also more prevalent, a complaint many had realised with the iOS 5 version. Another benefit was that voice dictation accompanied more internalised answers and sought less from the internet for basic mathematical and science related queries.

Now, with iOS 7 [read our review of iOS 7 here], Siri has become more adept at answering questions. This is because more sources, such as Wikipedia, Twitter and Bing have been added to its arsenal. Siri can now also return missed calls and playback voicemail messages, and provide image results from Bing. In the States Siri’s voice options have also changed, allowing you to select from a male or female assistant, although, for now UK Siri users have only the original male voice.

Visually, Siri is no longer a microphone icon with a pulsating purple loop around it. Now it is a straight audiowave that bends to both your voice and transforms into concentric circles to reply. You can now ask Siri to search specifically for information from individual search providers, and although you cannot change the default service provider for this service, you can phrase questions to it in a manner like so:

“[Insert search provider] the best way to cook an omelette.”

It is true that Siri has not had the smoothest upbringing, but happily, due to Apple’s persistence and frequent software updates, it has remained as the benchmark in personal voice recognition based software assistance. Besides the novelty factor, and ever-so-slightly HAL 9000-esque cynical undercurrent, the application does provide an invaluable and practical service.

By the looks of things, Apple will endeavour to continue promoting and defending the system with a terminal intensity, and improvements and tweaks are limitless as far as the developers and also fans of the system may tell you. It is very easy to become a fan of Siri, and you may yourself one day end up telling Siri that you are in love with it, but in its typical sardonic way it will respond along the lines of: “You hardly know me” and perhaps as yet, we don’t.

Check our our  Funny things to ask Siri in the UK