Apple’s iPad event is tonight! During the 22 October event we expect Apple to unveil an iPad 5 and iPad mini 2, and shed more light on the new Mac Pro and OS X Mavericks. Here, we advise you on the best way to keep up with the event, so you know how to watch the iPad event live.

Watch the video report below to find out more about what we think Apple will be announcing at the 22 October event.

Apple fans want to be the first to find out about the new announcements, and there are several ways to do so.

We’ll be covering the event as it happens in our live blog, so click the link below to go to the blog. Bookmark the page and check back at 6pm BST, when the event begins. We’ll be bringing you the news, photos and first reactions to Apple’s announcements.

Will there be a live stream of Apple’s 22 October event?

Yes! A dedicated Apple Special Event channel has appeared on Apple TV, meaning Apple will live stream today’s keynote for Apple fans to watch. Apple has also given its home page a temporary makeover, providing a link to the events page, where the event will stream from 6pm. 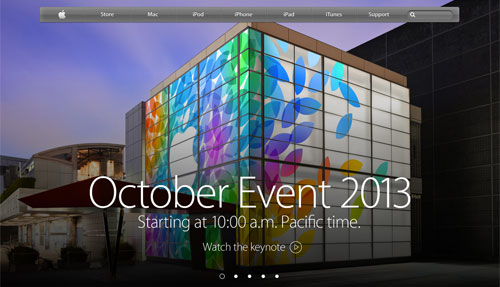 It’s worth noting that the Apple video stream isn’t always the fastest way to get the information. During the WWDC 2013 keynote live stream, the delay meant that the live stream wasn’t very live at all. In fact, it was so behind that the entire keynote had finished before Tim Cook had even taken to the stage in the stream on Apple’s website.

Where else can you watch Apple’s iPad event live?

Here at Macworld.co.uk, you’ll find a live blog of the event, complete with photographs and first reactions to the news.

You’ll be able to access the live blog, written by Macworld reporters at the event, via desktop or mobile browsers.

Following the event, Apple is likely to update its events page on its website to add the new keynote, and will also update the dedicated channel on the Apple TV. Currently, you can watch previous keynote presentations on the events page dating back to September 2012.

Apple’s 22 October event is expected to focus on iPads, but could also provide a release date for the new Mac Pro and OS X Mavericks, which were both previewed earlier this year.

Find out more about what to expect from the event by visiting our 22 October Apple event article.