If you’ve just bought or been given a new iPad (whether it’s a mini, Air, Pro or 10.2in model), and want to know how to set it up and get started, you’ve come to the right place. Apple makes it wonderfully easy to set up and start using its products, which should fill newcomers with confidence; but a little straight-talking guidance never goes amiss. That’s what we’ll try to provide in this article.

This guide will take you carefully through the process of setting up a new iPad and getting everything started. Here’s how to get your iPad up and running.

1. Unbox and switch on the iPad

The first thing to do is to take the iPad out of its box. You may laugh, but unboxing is always our favourite part of buying a new Apple product. The company is known for the simple and attractive quality of its packaging, and its understanding of the importance of first impressions.

Press and hold the Sleep/Wake button (it’s located at the top right of the iPad with the screen facing you) and it should wake up. Most iPads ship with around 90 percent charge still in them, so it shouldn’t need charging at this point… 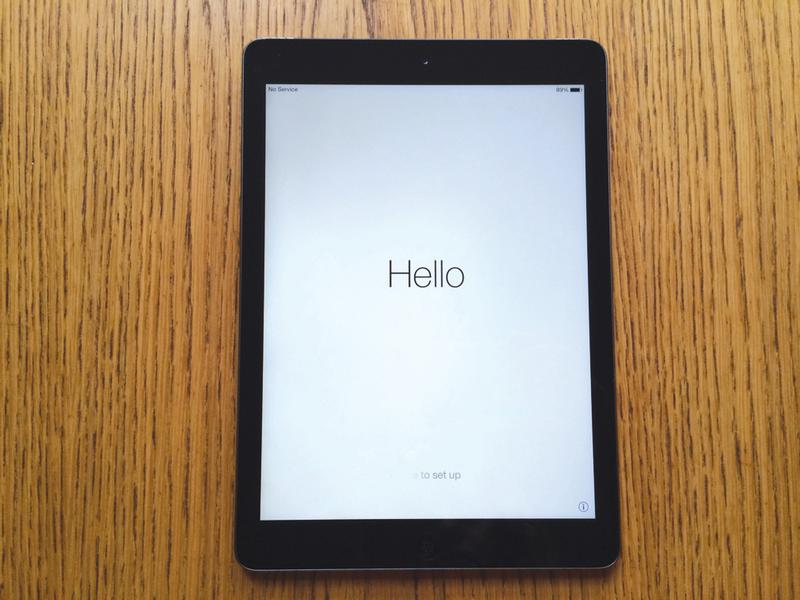 2. Charge up (if necessary)

…but there will always be exceptions.

If the iPad is low on power and doesn’t wake up when you hold the Sleep/Wake button, you may need to charge it. Take the Apple Power Adapter out of the box and attach the cable to the plug (using the USB connection end) and to the iPad (using the Lightning end – or USB-C in the case of the 2018 iPad Pro models). Plug it into the wall and give it 10 minutes.

3. Insert the SIM card (if you’ve got a cellular iPad model) 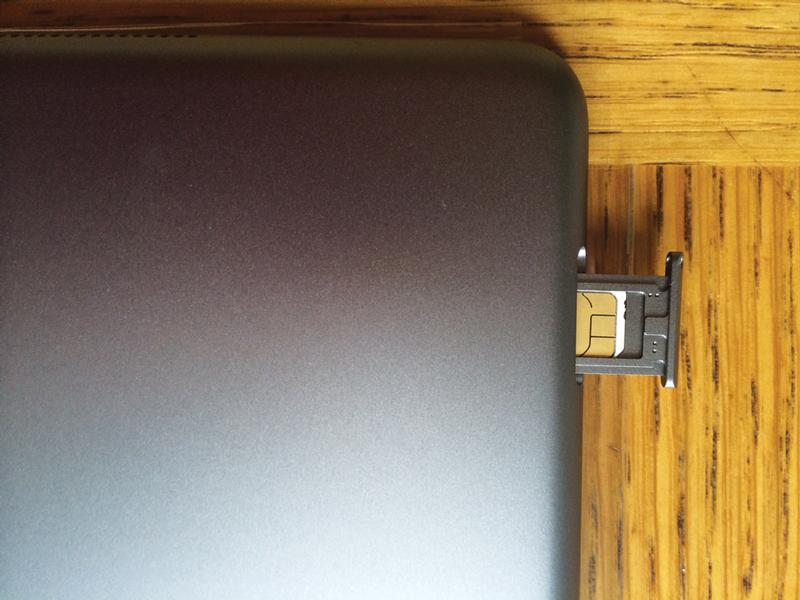 If you’ve bought a Wi-Fi + Cellular iPad model you may need to install the nano-SIM card.

To do this you’ll need to open up the iPad’s SIM tray, which is located on the righthand edge – you’re looking for a half-inch-long thin rounded rectangle with a hole at one end. You can use the SIM card ejector tool provided by Apple, or a paperclip; either way you gently insert the tool into the hole until the tray lifts outwards a little, and then pull it out with your fingers. Insert the SIM and put the SIM tray back into the iPad. 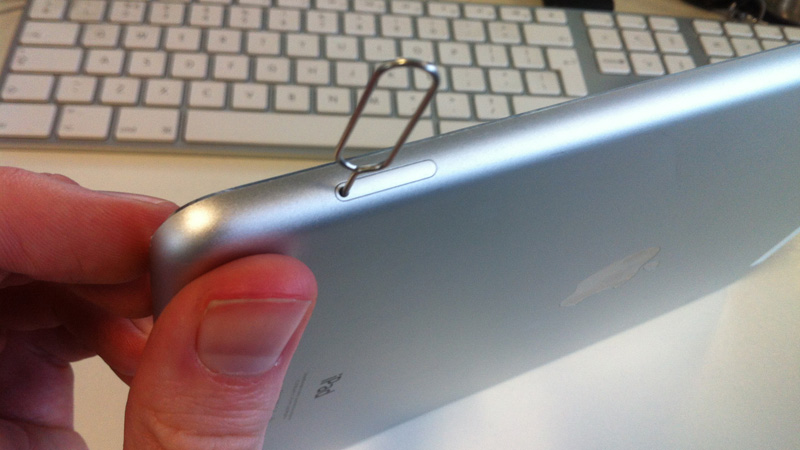 For more detail and pictures, see our longer walkthrough: How to put a SIM card into a new iPad.

If you asked Apple to help you set up the iPad when you bought it, the firm’s employees may have already installed the SIM card for you. Also note that the 2018 iPad Pro models support eSIM as well as having nano-SIM slots.

4. Say hello and slide to start

Slide your finger across the screen to get started. The first thing you need to do is to join a wireless network so the iPad can connect to Apple’s servers to request and send setup information. 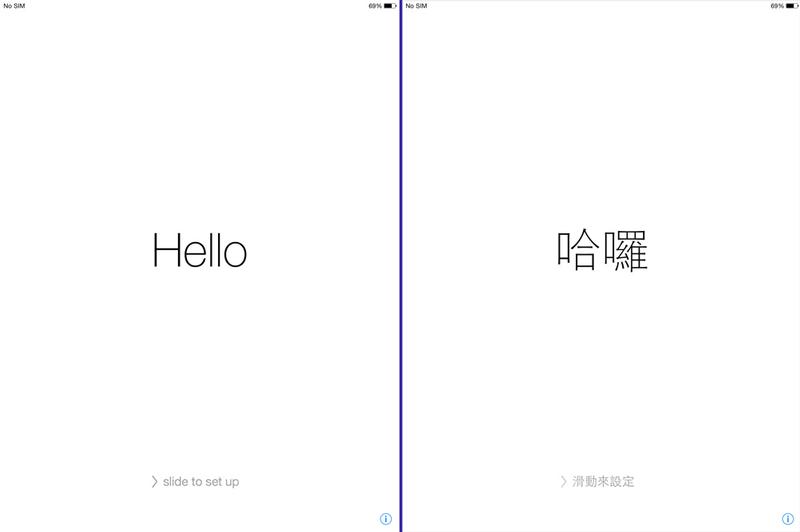 If you haven’t got access to a Wi-Fi network and have a Wi-Fi + Cellular iPad you can continue using the 3G/4G connection, which will work. But we suggest waiting until you’re on a good Wi-Fi network first. This is likely to be faster and more reliable, and if you choose to download some apps after setting up they may use up a lot of your data allowance. 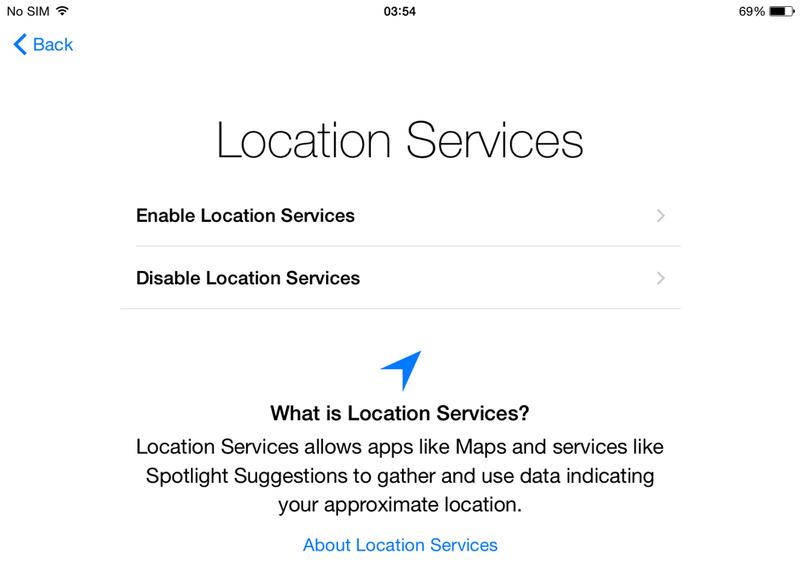 You don’t have to do this, but lots of apps, including Maps, won’t function correctly without Location Services enabled.

6. Create a Passcode and Touch ID

You’ll be asked to enter a four- or six-digit passcode. This is used to log on to the iPad along with Touch ID.

By default the iPad will propose a six-digit passcode when setting it up as a new device (if you set it up from a backup and used to have a four-digit code, it’ll happily let you stick with that). If you’d rather use a four-digit passcode than a six-digit one, tap Passcode Options and select the relevant option. You can also switch to an alphanumeric code (a regular password with letters and numbers) or select Don’t Add Passcode.

Whether you go for four digits, six digits or alphanumeric, we do recommend that you set up a passcode of some kind. It offers basic protection for your personal data, deters identity theft and makes your device harder for a thief to use.

A passcode isn’t high-end security, but it helps. And tapping in a few numbers each time you start up the iPad (or placing a fingertip on the Touch ID scanner or popping your face in front of the Face ID scanner, depending on your hardware) is a small inconvenience that we believe is heavily outweighed by the benefits. 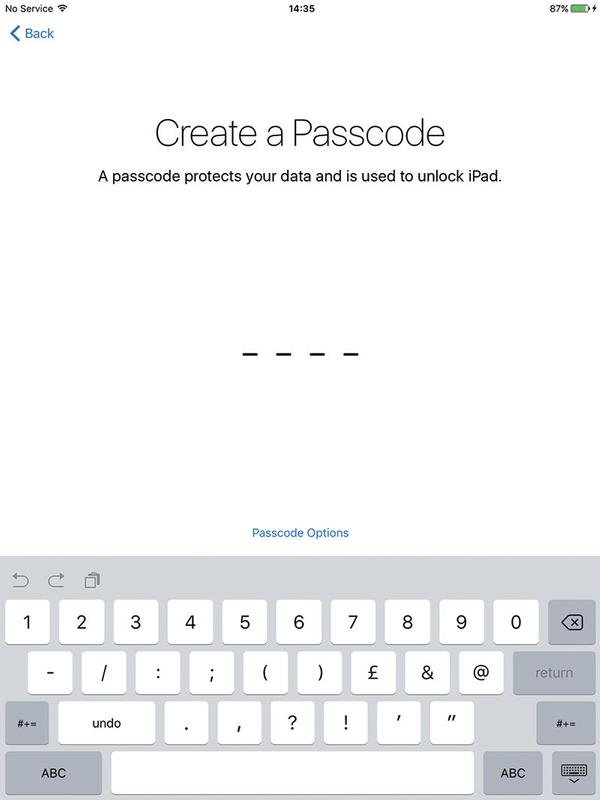 After the passcode is done you’ll be asked to set up Touch ID. Pick a single finger or thumb and tap it lightly against the Home button (without pushing it) as requested. You can add further fingerprints later.

If you’re lucky enough to have one of the 2018 iPad Pros you’ll be asked instead to set up Face ID.

You can either set up the iPad as a New iPad, or Restore it from an older iPad backup (which in effect copies everything from an old iPad to a new one). 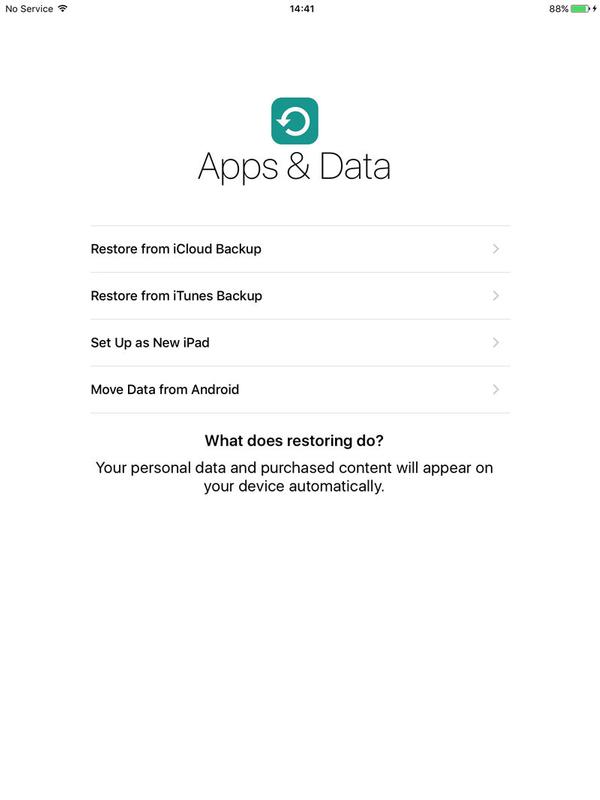 You have four options:

The iCloud backup works fine, and these days more people are using iCloud to back up their devices. But we still find the iTunes Backup a little faster.

If you have an Android tablet and want to move your data over to iCloud, select Move Data From Android and follow the on-screen instructions.

Either way make sure you’ve backed up your old iPad recently to either iCloud or iTunes.

If you’re going the iCloud route, then tap on the old iPad and choose Settings > iCloud > Storage and Backup and look at the bottom where it says ‘Last Backup’ and tap Back Up Now.

If you’re going down the iTunes route, connect your old iPad to your Mac/PC and open iTunes. Click on the iPad icon in the top-right, and look for Latest Backup. If it’s a while ago, click Back Up Now. (Here’s How to back up an iPad, incidentally.)

If you’ve got a Mac running macOS Catalina, you’ll find that iTunes has been removed from your system. In this case its duties will be carried out by Finder, in almost exactly the same way. 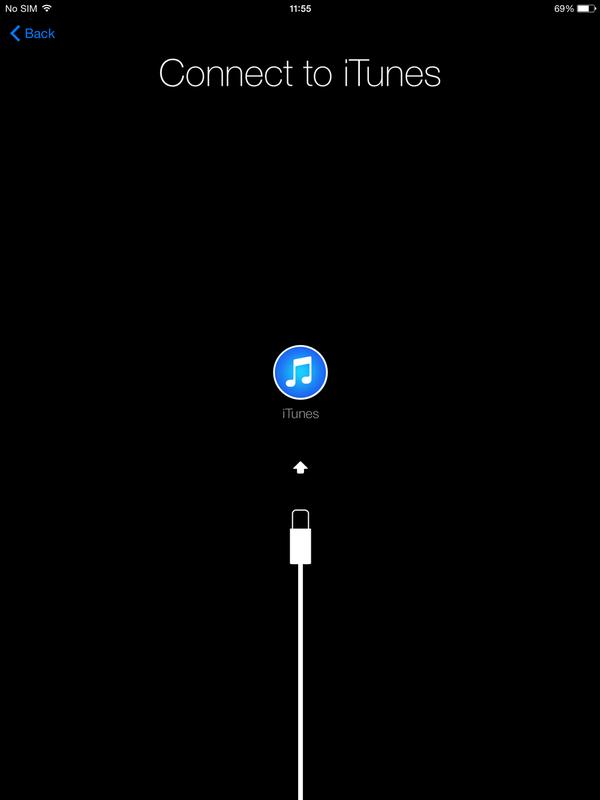 If you tap Restore from iCloud/iTunes you’ll need to enter your Apple ID and Password. When it’s finished you should see a screen saying Update Complete.

If you tap Set up as New…

If you haven’t got an Apple ID yet (seriously?) or want to start with a new Apple ID, tap Create a Free Apple ID and go through the setup process. You’ll need to enter your birthday, name, address and various other details.

Your Apple ID is used to make purchases from the App Store and iTunes, and to log into iCloud services. You may already have one, in which case enter the Apple ID and Password fields and tap Return. 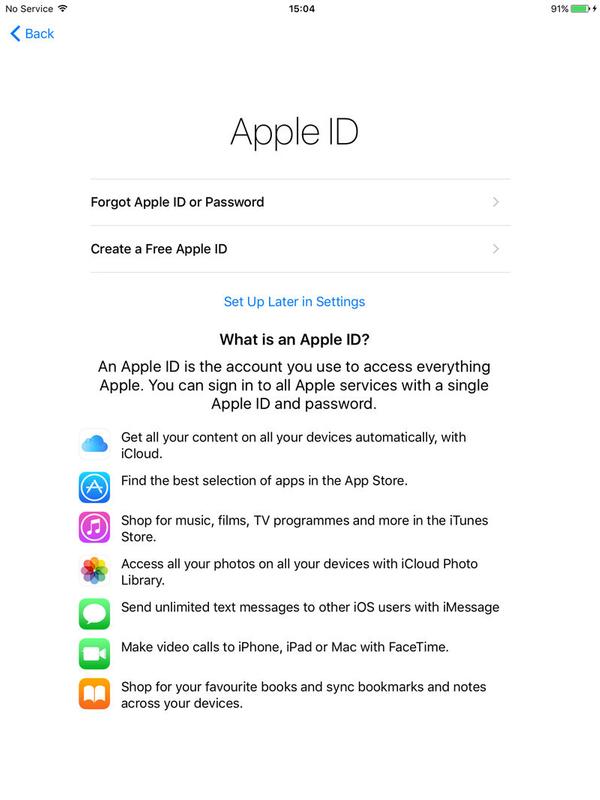 If not, tap Don’t have an Apple ID or forgot it, and Create A Free Apple ID. (Here’s How to set up a new Apple ID.) Enter your details to get an Apple ID.

Tap Agree next to the Terms and Conditions. You can read them if you want (in fact, strictly speaking we ought to instruct you to do so, even though they are inhumanly long), but you don’t get a lot of choice in the matter: you have to agree to them to use your iPad. Tap Agree again on the popup window. 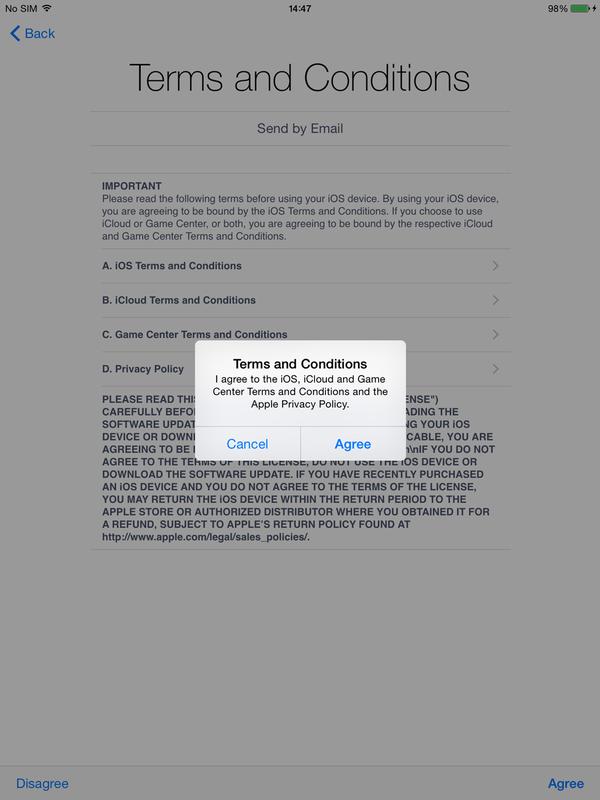 Siri is iOS’s onboard voice assistant; it’s much maligned but has improved a great deal since it started and can be very useful. With Siri you can issue voice commands to your iPad, such as “remind me to mow the lawn”, or ask questions such as “What’s the capital of Bulgaria?” 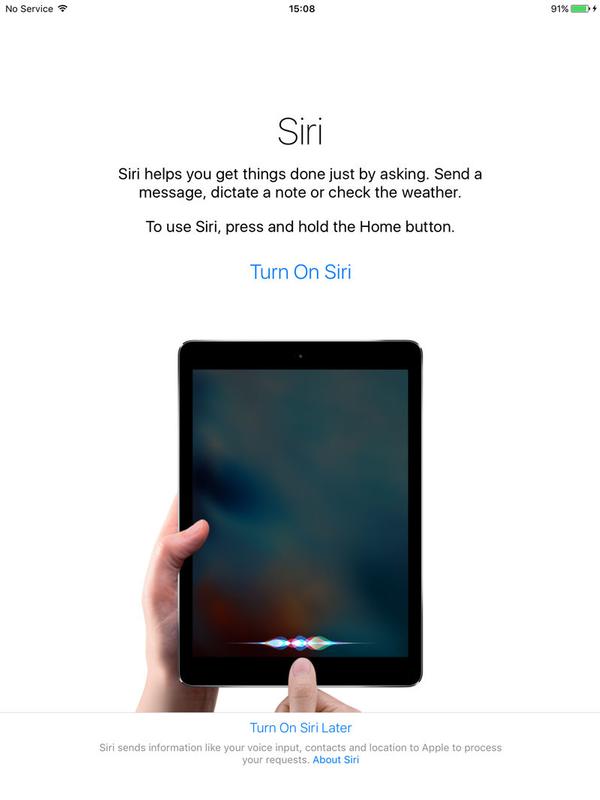 What you might not know is that your voice recordings aren’t interpreted on the iPad itself: they are sent to Apple to be machine-analysed (very quickly, so you won’t particularly notice the delay, but it does mean you need to be online). And some people are more comfortable with that than others. Tap Turn On Siri to set up Siri, or Turn On Siri Later if you want more time to consider it.

(If you’re having trouble with Siri, or otherwise unconvinced, take a look at our Siri troubleshooting guide and our Complete guide to Siri.)

You’ll be asked if you want to help Apple improve its products by agreeing to diagnostics. If so, details of app crashes and the like will be sent to Apple for analysis by its engineers. It’s a public-spirited thing to do, and may help problems you face to be solved more quickly, but it’s not compulsory.

Tap Use iCloud if you want to link your Apple ID to an iCloud account and start storing things on Apple’s servers. iCloud is a pretty useful thing to have around, so tap Use iCloud unless you really don’t want Apple to have access to any of your data. 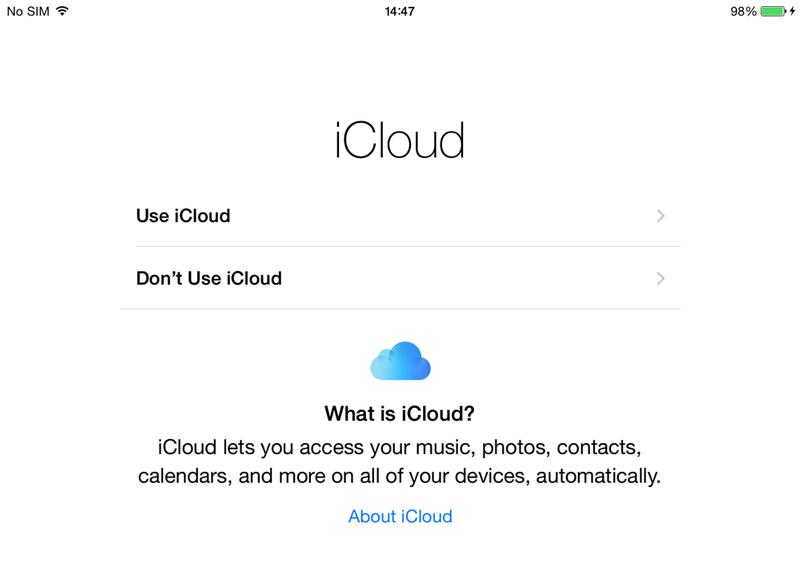 Tap Find My iPad to start using Apple’s Find My iPad service. This is great if you ever lose an iPad: you can locate it on Apple Maps, send a message to the person who has it, lock it or erase it. It’s pretty useful, so we’d recommend that you tap Find My iPad – but as ever it’s your decision. 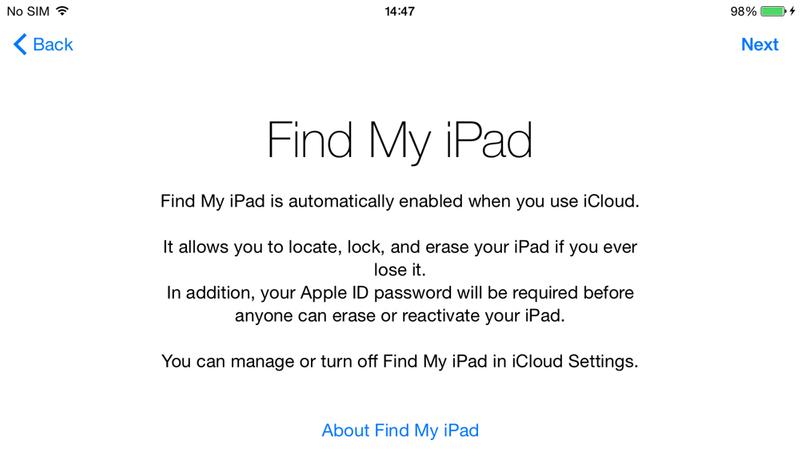 You will now see a list of email address that people can use to contact you using iMessage and FaceTime. Tap the email addresses you don’t want to use (this removes the blue ticks) and then tap Next.

And that’s it. You’re now good to go. Tap the Get Started screen to start using your iPad. 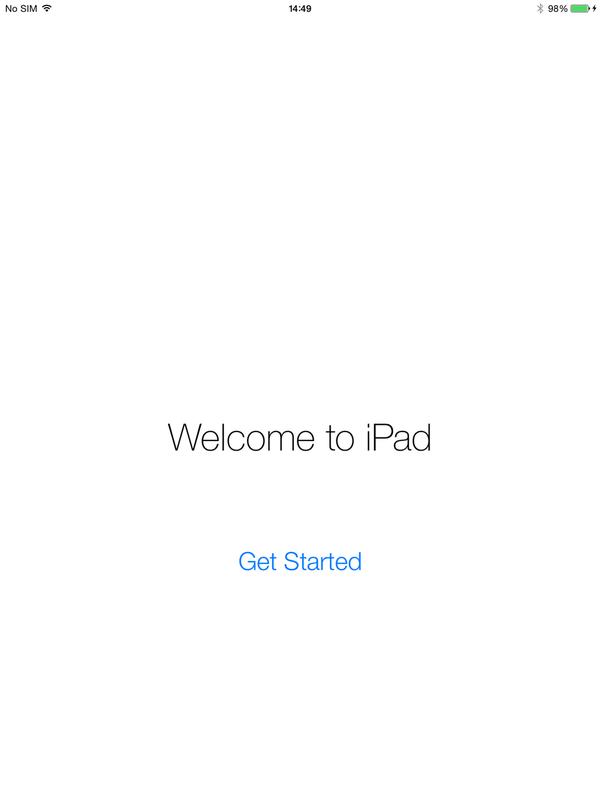 Where next? You probably want to start installing apps. And we have some advice on that front.

Here are a few of our app roundups. They offer recommendations of apps that won’t let you down.

And what if you prefer gaming to more work-related tasks? Try these recommendations.