How did you and Dave 1 meet? Was it a long time before you formed Chromeo?

P-Thugg: We met way before we formed Chromeo.  We met in high school through a band that a friend of mine had formed, and then later Dave got into the band playing the guitar. So we basically met right then and we became friends and we were… we kind of stuck together throughout all the different bands that we had. We were always like the centre of it, so Chromeo is probably something like our 6th band together.  We just started Chromeo at some point in 2001 or 2002.

Chromeo get recognised a lot for the style as well as the music. How much is image a part of the band?

P-Thugg: A lot. We really focus on our image – not that we take a lot of time, you know, dressing up or anything, but we do feel it’s important for people to see us as we are, because there’s a certain chemistry between us.  There’s a contrast between us and it’s part of the story. 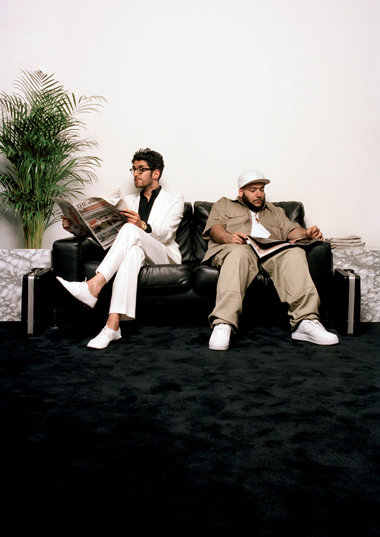 With that type of music, you see two guys like us, you know, we’re so different from each other and we’re so different from what the music originally is, that it’s kind of important to see us all the time.  But we grew up with hip-hop and the aesthetics are very in your face. It’s as much the persona as the music. So this is basically where we come from. We just like to be involved visually in everything that happens.

How is your relationship with technology, when you’re composing music or performing?

P-Thugg: We’re scared of technology! I say that because most of the technology we use is vintage. It’s from the early 80s, which in some ways is more complex than the technology today.

Not so much the idea of ‘it just works’?

P-Thugg: Right. Technology today, everything on your computer is very simple. But technology back then, every single synthesizer is different. You plug it in a different way, it works differently, so you have to learn everything.  But we don’t use too much computers or plug-ins and stuff.  For our music we mostly use vintage hardware, which we later record into a computer just to record the music. But all we do is vintage analogue gear.

You guys have a very tongue-in-cheek way about your music. Some people may not have taken you seriously as a band on first listen because of it. How have you overcome that obstacle to become the band that Chromeo are now?

P-Thugg: You just keep at it. You keep doing what you’re doing.  When you make music you either do what feels natural to you and you stay happy with your career, or you do stuff you don’t want to do and you might get more popular, sell more records – but you’ll never be happy.  Music is something where truly you have to express what’s on your mind, but not at the cost of success. You stay focused, you stay true to what you believe in.

And maintain a sense of humour.

P-Thugg:  Both of us are naturally funny guys. You know if you meet us, there’s not a second in the conversation where you won’t laugh. So it’s going to come out in the music. This is how you can tell this music really comes from our heart. It’s not too calculated, we’re not just trying to sell records – this is what we do. We’re in it for the artform. We like to make that kind of music, we are really adamant about having good videos, about having good artwork, and for us it’s the whole picture. An album is a complete piece of work. It’s not just putting music out.

Your music videos are great! How much involvement do you have in the ideas and the production process?

P-Thugg:  We take a lot of time choosing directors.  And we usually choose a director before we even see a treatment – we know the potential when we see a reel or something – just because we like to take the director somewhere else that he hasn’t been. If we like this guy’s previous ideas, we usually know that we’re gonna mesh well together, and that he’s gonna come up with something good. Then we usually put in ideas, but we let the directors take over the process and get the main idea.

Can you explain the thought process behind one of your favourites?

P-Thugg:  For the last video we did, for When The Night Falls, we saw the director’s other videos and thought they were amazing. Then they submitted their idea for our video, and we loved it. We had like a couple of ideas to add – like, for instance, in the middle of the video there’s kind of a French interlude where we’re in an elevator, and we speak to each other in French; that was our idea. And at the end of the video, the baby’s face, my face on the baby, as if I was Dave’s baby, that was our idea too. But most of the work, the main idea, was the director’s idea.

So that’s how we come in. There’s an idea that we love and then we give a couple of pointers, a couple of ideas, and the directors make it happen.

Your music has featured in various commercials and video games.  How do you decide which projects you want your music to be associated with? Do you have much of a say?

P-Thugg:  We do have a say, but then we also accept everything. Except stuff maybe like for cigarettes – we wouldn’t do that.  To us our music is compatible with everything.  It’s not like we’re an indie punk band and we have morals about selling out. I mean we’re just… we want to be everywhere we can, so we kind of accept everything that’s reasonable and that doesn’t change our image or anything. As long as the collaboration is tasteful, we’ll take it.

So a video game is great for us, there’s no real crazy political involvement or anything. It’s just a video game the kids play, that’s the thing. 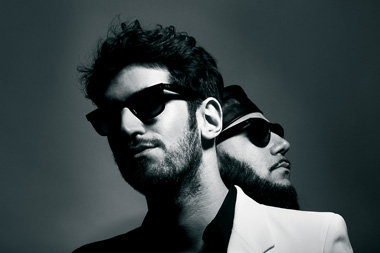 As with any long-term relationship, Chromeo have had their ups and downs. Dave 1 and P-Thugg have been friends and bandmates since the high school.  But somehow they manage to separate the music from the personal.

“We don’t have a lot of disagreements musically,” says P-Thugg.  “Personally we’re like an old couple. We’ve known each other for 18 years, and I think the longest I haven’t spoken to Dave was four days in a row. But musically we trust each other enough not to create ego-driven situations.”