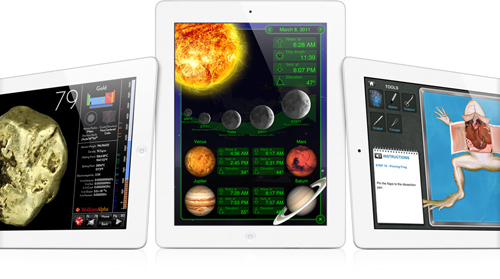 The iPad rules the roost in education. Even though other platforms – Android and Windows, for instance – would very much like iOS developers to create education apps for them, it doesn’t make economic sense, as schools simply aren’t using other platforms in numbers great enough to be profitable.

Recent announcements by Tim Cook claiming that iPads ruled the roost in education shocked many. The statistics included a claim that there had been a doubling of iPads sold into education in the UK, and an astonishing 94 per cent market share in education in the US, must have made grim reading for Apple’s competitors.

As a veteran developer of education apps for iOS, I already had a pretty good view of the landscape of tablets in education. Research I conducted this summer pointed towards a similar picture, with a fourteen-to-one lead over Android in the UK, and a fifty-to-one lead in the US. So while Tim Cook’s numbers didn’t surprise me, it was good to confirm my findings.

The reason for the research into tablet use in education was to see if it might be worth developing my PocketPhonics app for other platforms. After almost five years in the Apple App Store as one of the top phonics apps, it makes business sense to see if it’s possible to grow the market on other platforms.

The short answer to that question is however an emphatic no. I could barely find an Android device in a school, either here in the UK or in the US where iPad implementation in schools is much further ahead than here. So even though other platforms would very much like iOS developers to develop education apps for them. It doesn’t make economic sense, as schools simply aren’t using other platforms in numbers great enough to be profitable.

So with 94 per cent of the education market spoken for, you might think other tablet platforms must be ready to throw in the towel. However Apple’s figures don’t tell the whole story. The penetration for tablets in education is small, with around forty per cent of primary schools using tablets, and each school in the UK is typically using quite low numbers of units. It’s safe to describe this as still being in the experimental phase. One-to-one iPad programmes are extremely rare in the UK, most schools only have a handful of devices. In fact a good many iPads being used are the teacher’s own personal iPad, not a school purchased item at all.

So even though Apple has 94 per cent of the education sales, there is still more than 60 per cent of the market up for grabs. It’s still a difficult market to enter, but not impossible. So this is no time for Apple to rest on its laurels.

From my point of view, with a limited budget for development, I’ve had to choose between developing my products further to bolster their usability for schools, or attempt to make a version for an unproven platform. In my opinion this has paid off. The school friendly features like cloud based progress, and class management tools has kept PocketPhonics in the best sellers list where others have fallen by the wayside. In the five years since it’s original launch, none of its original competitors remain despite the ever more cutthroat market of the App Store.

Schools are demanding high quality education apps, and my research keeps pointing to this as the real reason they are overlooking the cheaper Android or Windows based hardware. They need tablets to make a difference to their students, and that requires good software. So having six iPads in a class will still have more positive results than a class with cheaper tablet for each child, if the software falls short of requirements.

This leaves other platforms in a catch-22 situation. Schools won’t buy these non-Apple tablets because they don’t have the popular educational apps, and developers won’t port their apps because schools are just buying iPads. Unless the other platforms address this, the untapped 60 per cent of the education will be gifted to Apple too.

The education market doesn’t simply stop at schools though. Five years ago, when my first education app launched, the audience was parents. Parent enthusiasm for tablet learning pre-dates schools implementing iPad learning programmes. I’m especially keen to see schools adopt tablet learning more quickly not simply to sell more software. I think there is a real problem brewing with the digital divide, where some kids are getting a head-start in literacy, and others don’t.

A recent Ofcom survey showed that 30 per cent of UK households were using tablets for education. Feedback I get from parents often focuses on the head-start their children are getting before they even go to school. As great as that is, it also means other parents aren’t getting that advantage. So from the very first day of school there’s a potential divide between the haves and the have-nots.

The recent billion-dollar rollout of iPads for all Los Angeles school-children was specifically aimed at combating this digital divide. I firmly believe that if we want equal opportunities for our children, the UK should follow this approach. Furthermore, I believe it could be done with relatively little impact to school budgets.

The coalition government introduced something called the Pupil Premium to tackle this kind of problem. Over the next year schools will be allocated £900 for every pupil considered to be disadvantaged. It potentially provides schools with a ready source of funds to close the digital divide. As more apps emerge with progress tracking, schools will be able to better demonstrate the effectiveness of this investment.

One thing that was very apparent from the numerous surveys I’ve conducted, is that people using iPads for learning are very much in favour of it. Parents using apps at home, want to see schools using tablets in school. School teachers also almost universally say that the use of tablets in schools is inevitable in the future.

If these things are inevitable, delaying them can only have a negative effect on our youngsters.

John Friend is MD of Apps in My Pocket, and his PocketPhonics app has been in the bestseller list of the Apple App Store since its launch in December 2008.