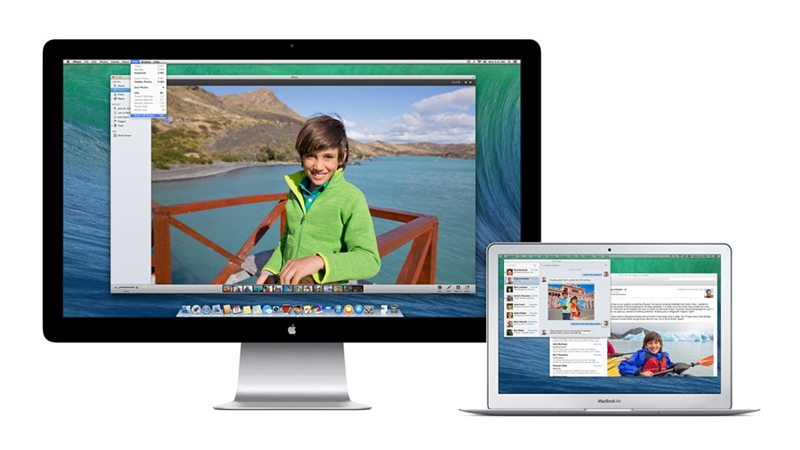 Here we share eleven tips for using Multiple Displays in OS X Mavericks including viewing the dock and menu on two displays and using your Apple TV to send a second Mac screen to your TV.

If you regularly use more than one monitor, then you’ll appreciate the fact that if you use an application in full-screen mode (a feature first introduced in Lion), you’ll be able to use the other display at the same time. Pre-Mavericks if you turned a program into full-screen mode, your other display would be rendered useless, taking on a wall-to-wall linen-look. Now you can use the other monitor, perhaps to pull content between two applications, or so you can view your email while working.

This isn’t all that’s new in terms of multiple displays, though. If you have an Apple TV hooked up to a TV, you can now turn that TV into a second display. So you could shoot a video over to your TV screen and let it play there while you are working on your laptop, for example.

You can also read our series of tips on how to master Safari in Mavericks.

You can also r ead our Maps tips here.

1. We love the fact that the Dock and menu bar now appear on both our screens. Pre-Mavericks, the OS X Dock appeared on your main screen only, usually at the bottom (although it’s possible to move it to the left or right), now the Dock will follow you around. Move your cursor to the bottom of your second screen to see it pop up.

2. Note that if you use the task switcher shortcut (Cmd-Tab), the applicaiton switcher will appear on whichever monitor the Dock was most recently active on. If you later want to move it to your main display you will have to open the Dock there first.

View the menu bar on both your displays in OS X

3. Now each display can have its own menu bar featuring the contents of the menu for the currently active application on that screen. You’ll notice that the inactive program’s menu bar is semi-transparent, which is great news because previously you would have had to mouse back and forth to your primary screen to access menu items.

5. Mission Control (formerly know as Exposé) first appeared in Lion. Mission Control gives an overview of all running applications, grouping windows together according to the application and giving access to Spaces and full-screen applications. In Mavericks, each screen can act independently with its own Spaces. This means that where in Mountain Lion if you switched Spaces, the content on both displays would change, now when you switch Spaces only the content on the active display will change. To enable multiple workspaces go to System Preferences > Mission Control and tick the box next to Displays Have Separate Spaces. That option allows each of your monitors to have its own set of separate workspaces. 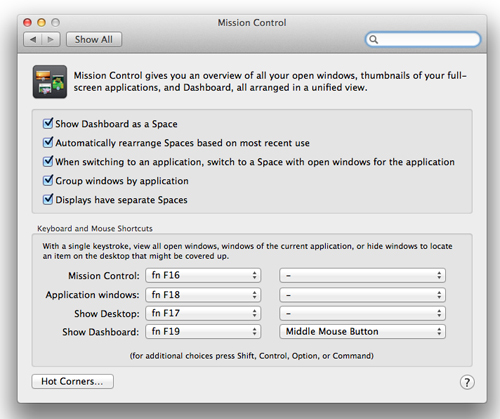 6. One thing we miss is the possibility to position a window so that it straddles two screens. If you drag a window towards another screen, it will fade out. If you prefer the way things used to be, you can choose to have Spaces remain consistent across your displays. To set Mission Control to your liking, visit System Preferences > Mission Control and decide whether displays should have separate Spaces. 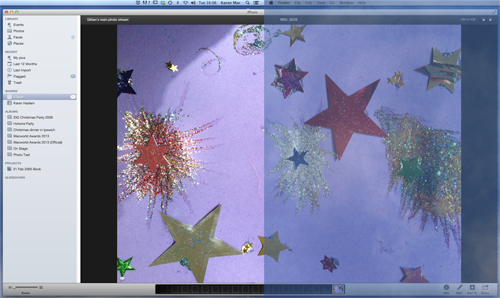 Send a second Mac screen to your TV

7. If you’ve got a television and an Apple TV, with Mavericks you can use the TV screen as an external Mac display. Although it was possible to use AirPlay Mirroring in Mountain Lion to view your Mac’s display on a television screen, in Mavericks you can treat that TV screen as a second display. Make sure you are on the same local network as your Apple TV – if you are you should be able to see the AirPlay icon in the menu at the top of your computer screen. During testing, we sometimes found our local network to be a bit flakey and we had to turn the router on and off to get the AirPlay icon to show up. Select the AirPlay icon and choose the Apple TV from the menu (if you have more than one Apple TV they will all show up here). Next, choose whether to Extend Desktop or Mirror the Built-In Display.

8. You can mirror the same screen on all your displays if you want, but only one Apple TV can be used at a time.

9. The display being driven by your Apple TV is likely to suffer from some lag, so you probably want to move the cursor more carefully when you are accessing content on that screen.

10. It doesn’t appear to be possible to use this screen-sharing feature with a Mac mini and an Apple TV attached to a TV screen. In that case your best option appears to be to plug the Mac mini into the TV using an HDMI cable.

11. Applications will appear on whatever screen they are initially launched from, but you can assign a program to a specific screen. To do so, create an additional space in Mission Control and add it to either monitor. To create an additional space click the mission control button (F3) or the icon in the Dock. Then move your curser to the edge of the screen and click the + that appears. Once you have the new ‘Desktop’ you can add it to either of your actual desktops. Next find the app you wish to open in that ‘Space’ in the Dock. Right-click (or ctrl-click) the app and choose Assign to Desktop on Display 2. 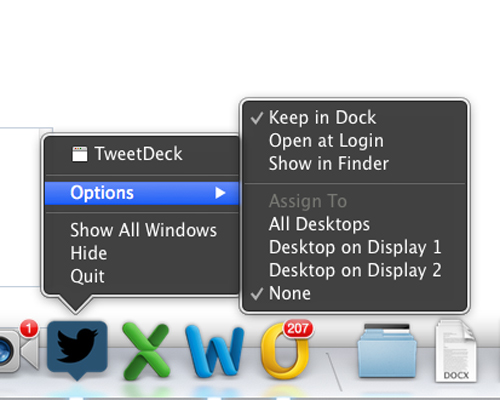