Using Siri, Apple’s voice assistant, you can speak commands to your  iPad or iPhone (or Mac, Apple Watch etc) and have it do your bidding. Here’s a rundown of all the things you can get Siri to do, plus some tips to get the feature working better for you.

How to use Siri on iPhone & iPad

If you’ve got an iPad or iPhone (iPhone 4S or newer, iPad 3 or newer, any iPad Pro or mini, or a 5th- or 6th-gen iPod touch) you can trigger Siri in one of these ways:

Note that you will also need to have a data connection to use Siri, and older iPhones (pre-6s) can only use the Hey Siri! prompt when connected to a power source.

When you’ve prompted Siri, the background should blur, you’ll hear a ‘ba-ding’ noise and ‘What can I help you with?’ will appear onscreen. You should also see a wavy white line at the bottom of the screen.

Speak your request into the iPad or iPhone; when you’ve finished, the white line turns into a round microphone icon. Siri should get back to you with an answer (although sometimes it takes a few moments).

Since the X-series iPhones (X, XS, XS Max and XR) have no Home button to invoke Siri, your options are slightly different. This also applies to the 2018 iPad Pro models.

How to use Siri on the Apple Watch

For more information, read about how to use Siri on Apple Watch.

What can Siri do?

Siri is the digital assistant that’s built into your iPhone, iPad, Apple TV, Apple Watch and Mac. You can ask Siri to do something and have your device do it, rather than go through multiple menus or tap through lots of options.

Siri is constantly improving to become faster and more reliable, and to expand its repertoire of functions.  In iOS 7.1 it gained a female voice for the UK, iOS 8 added music identification and “‘Hey Siri!”, and iOS 9 made Siri contextually aware. iOS 10 gave it the ability to control non-Apple apps, and this coincided with it arriving  on the Mac. In iOS 11 learned to translate phrases and iOS 12 introduced Siri shortcuts.

In the rest of this article we’re going to walk you through the many things that Siri can do. But you can also trigger Siri and then not say anything; after a moment it will default to a screen that lists lots of your options, including actions third-party apps on your device.

Siri can be used for the following:

Here are some things to ask Siri: 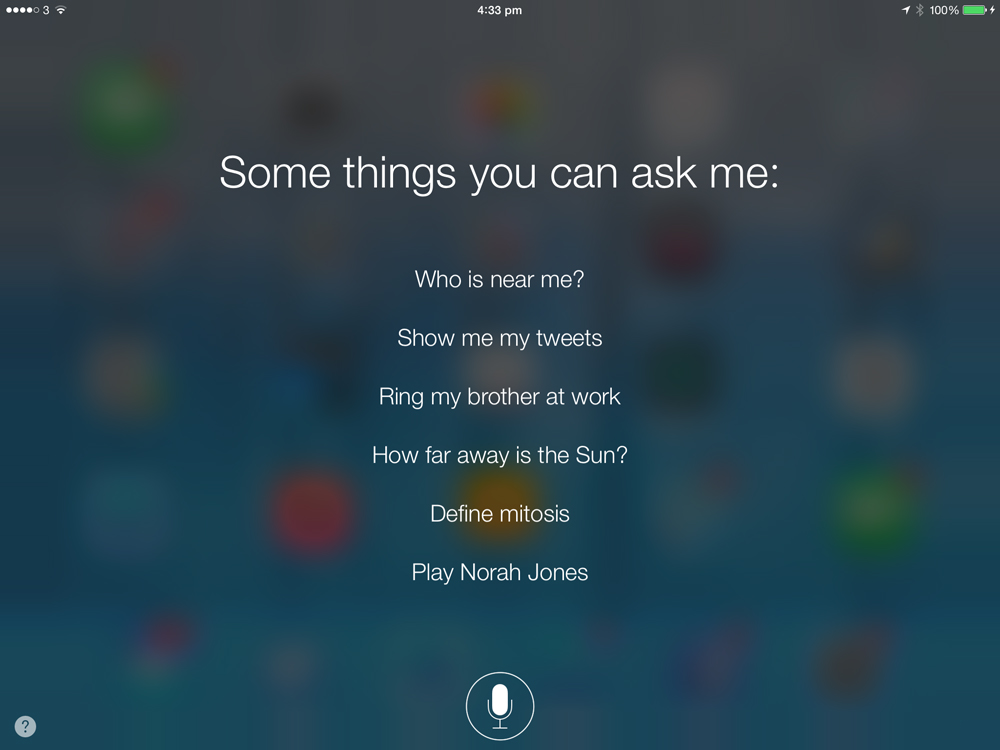 Siri can also be your music DJ

You could ask Siri to…

You’ll need to sign up to Apple Music to make the most of this feature, though.

Siri can be influenced by the context

Siri can take into account your location, the time of day, re-occurring activity, usage patterns, the app you are viewing or other connected devices to anticipate your next move and surface relevant actions and information, before you even have the chance to ask a question or type in a query. So, for example, you could:

We have more details about the different things you can ask Siri to do below. Plus, if you are looking for a laugh, read: Funny things to ask Siri.

How to set up Hey Siri

“Hey Siri” means you don’t need to press the Home button (or Side button if you have an iPhone X) in order to trigger Siri. Which is helpful if you need to have your hands free. (Or if you’re cooking, have dirty hands, and want to set a timer.)

It’s a helpful feature, but it could get very frustrating if your iPhone answered to everyone. Luckily when you set up Siri you train it to recognise your voice.

Here’s how to set up Hey Siri:

How to type to Siri

You don’t necessarily have to talk to Siri; if you prefer, you can type in your question. Here’s how to set Siri up so that you don’t have to speak your commands:

Siri tips: How to get Siri to work better

Having a few problems with Siri? Is Apple’s digital assistant failing to understand you? Here are a few tricks you can implement to make Siri do a better job.

Make sure you have a data connection

Siri works by recording your voice and sending it to a server that interprets what you’ve said and returns plain text. If you haven’t got an internet connection, Siri won’t work.

You can also manually control how long Siri listens to you for, rather than waiting for it to detect that you’ve stopped speaking. To do this, hold down the Home button while you say your command or ask a question, and release it when you’ve finished.

If you find that Siri isn’t understanding you very well, check that you’ve got the right language selected. If you use UK English you may get better results if you have English (United Kingdom) selected.

To change Siri’s language go to:

Note: If you don’t speak a language fluently Siri may not be able to understand you. Even the US version of Siri may have difficulty understanding a British accent. And, as you can see from this video, Siri may struggle with some UK regional accents.

How to dictate with Siri

If you’re dictating a message or email using Siri, there are a few things to bear in mind if you want to get the best results.

To get the most out of dictation, you’ll need to start thinking in punctuation. For example, to construct a decent email message, we might say, “David. Comma. New paragraph. What do you think about writing a review of iOS numeral 12. Question mark. New paragraph. Let me know what you think. Exclamation mark.”

What to do if Siri misunderstands you

Siri is by no means perfect, and occasionally it can mistranslate what you’re saying, either transcribing the wrong message or finding the wrong result from Contacts.

The easiest way to correct Siri is to tap on the place where Siri has transcribed what it thinks you said.

How to change Siri’s gender

You can also switch Siri’s gender:

Your iPhone may download the Siri voice you have requested.

Things you can ask Siri to do

Here is a list for some of the serious stuff you can say to Siri with some specific examples.

Use Siri to adjust settings

Siri can access the Settings on your iPhone or iPad, which makes it much easier to quickly make changes.

It’s much faster to ask Siri to access settings than it is to dive into the menu.

Use Siri to read and reply to messages and emails

When you get a message, you can instruct Siri to read the message, and it will.

To find out how Siri compares to the competition, read Siri vs Google Now vs Microsoft Cortana vs Amazon Echo.

Set reminders and alarms with Siri

It’s much easier to set an alarm or timer using Siri than it is to unlock your tablet, find the Clock app, and tap within the app. 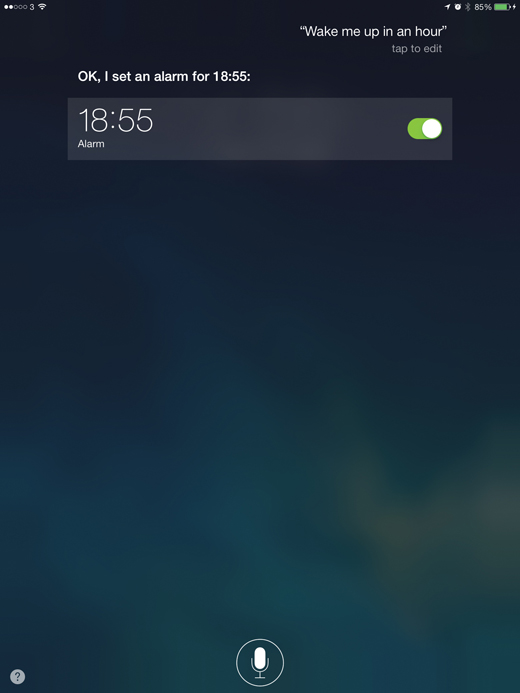 Use Siri to find out whose iPhone/iPad you’ve found

If you’ve found an iPhone or iPad that you can’t unlock and you don’t know who it belongs to, you can try asking Siri. 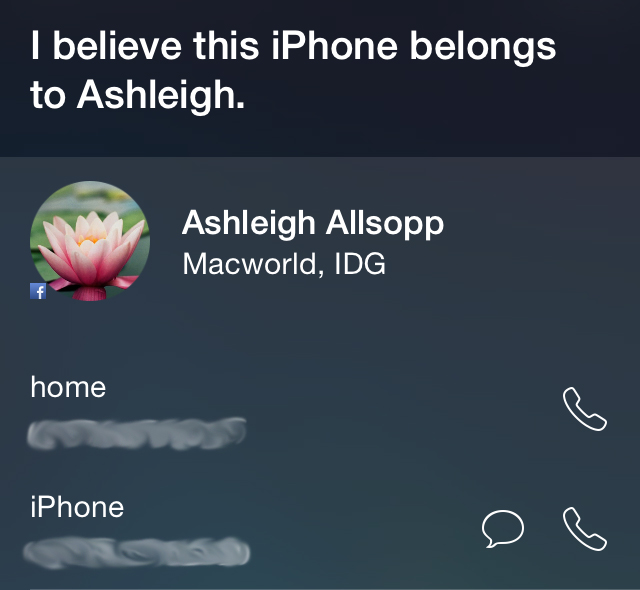 Ask Siri about: The weather

(What you can’t do: Delete apps, move apps, go to the Home Screen.)

Ask Siri about: Find My Friends

While we’re talking music, did you know that you can tell Siri to identify music?

If you later want to look back at the songs Siri has identified in the past, you can open the iTunes Store app on your device, tap the button in the top right corner with three lines, and then tap Siri. 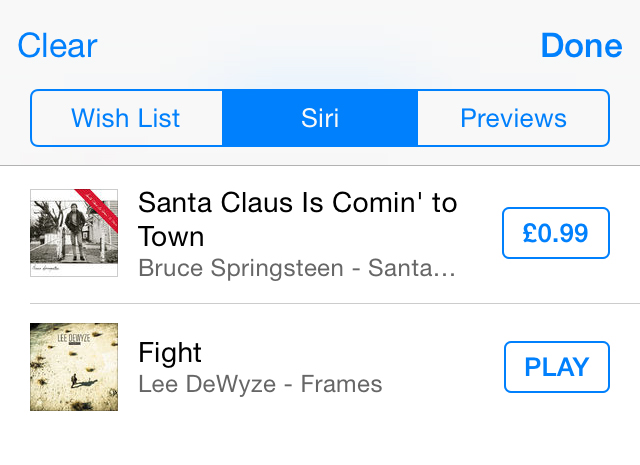 Siri used to be extremely football-centric (at least in the UK), but these days you can also ask for cricket scores or say “Who’s winning the Formula One World Championship”. We’ve not had much luck with rugby or snooker, but this is an area where Siri improves on a regular basis and we might have just been using the wrong terminology – Siri responds best to official names.

Ask Siri about: Clocks and Alarms

Ask (or tell) Siri about: Contacts

Siri uses Wolfram Alpha to provide stats and facts. Wolfram Alpha can answer questions related to mathematics, geography, chemistry, words and linguistics, units and measurements, and all kinds of things.

For many general knowledge questions, Siri will automatically offer Wolfram information. But if it’s refusing to do so, try prefacing your question with “Ask Wolfram…”

Since the launch of iOS 12, Siri has offered a feature called shortcuts. This allows you, or third parties, to create custom, potentially multi-step, Siri commands.

Sometimes apps or websites will offer shortcuts that you can ‘install’ by tapping a single button and speaking a trigger word or phrase. But by installing the Shortcuts app itself you could set up a sequence of events that turns on your HomeKit heating and the radio, checks the traffic and sends an email to a specific contact, all from the single trigger “Wake up”.

This is a pretty big topic, so those who are interested would be best advised to read our dedicated tutorial: How to make a Siri shortcut.