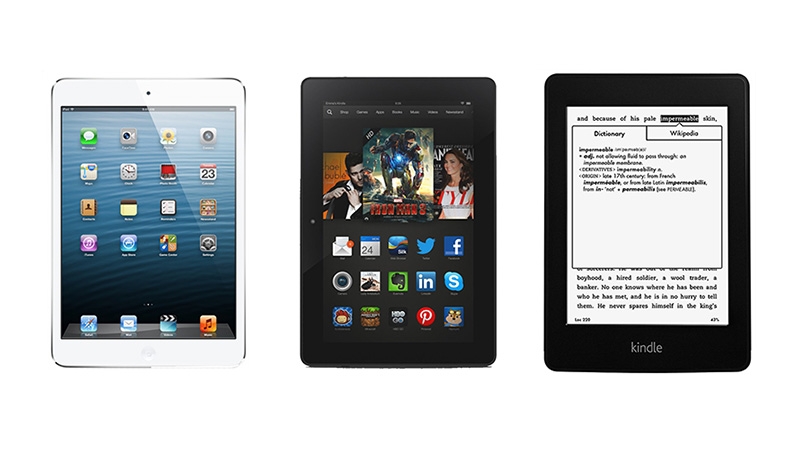 Should I get an iPad mini or an Amazon Kindle. Most of our readers here at Macworld would plump for the iPad mini with Retina Display over a Kindle, but there are still many questions to ask. Is the Kindle better for reading books than an iPad mini, and will it be easier for non-tech savvy relatives to use an Amazon Kindle or an iPad mini.

In this article, we’ll take a look at the various iPad models available, and compare them to the Amazon Kindle devices. We’ll look at what the iPads and Amazon Kindles have in common, and how the iPad and Kindle are both different.

What is the Amazon Kindle?

The Amazon Kindle is a device, similar to the iPad, built by Amazon. The original Kindle pre-dated the iPad and was a pure text reader. It delivered black and white text, and rough images, which you could read on a screen.

This Kindle still exists today in the form of the Kindle and Kindle Paperwhite. To this device has been added a second kind of Kindle, known as the Kindle Fire. The Kindle Fire is a more iPad-esque device that the original Kindle, with a full-colour display running on Android operating system. It’s closer to the iPad but also loses some of the pure focus and functionality of the original Kindle. Not to mention it’s more expensive. 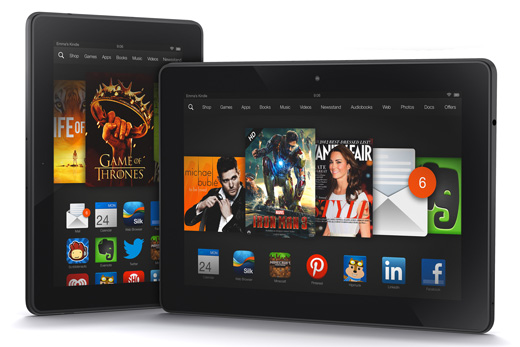 What is the Apple iPad?

Apple’s iPad should need little introduction. It’s the original and most popular tablet device on the market. There are two main models available, the iPad and iPad mini. The first has a large 9.7in colour screen, the second a 7.9 inch display. Some iPads feature a Retina Display, which packs pixels so closely together you can’t tell any difference between them. This makes text much easier to read. 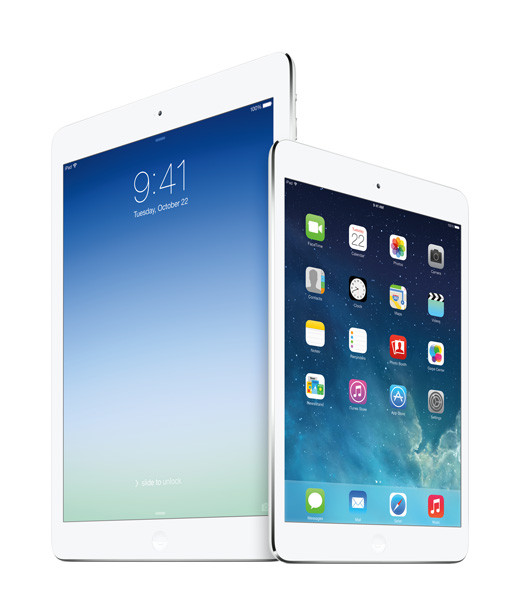 The iPad comes with an app store that enables you to download apps. Apps can be just about anything, and Apple’s app store has a legendary amount of apps available. There are over a million apps available on Apple’s App Store. According to Google results,  there are just over 129,000 apps available on the Kindle App Store. That’s still a lot of apps, and you’ll find big hitters like BBC iPlayer on both stores. However you don’t get apps like GarageBand or iPhoto, and you won’t find apps that are causing a stir like Sunrise arrive on Kindle until long after they have been on the Amazon store .

Buying books and entertainment on the Amazon Kindle vs Apple iPad

The Apple App store has, undeniably, the upper hand here though. Apple has a vibrant iBooks app with its own iBooks Store; this has a huge range of best sellers and free books formatted for the iPad. Not only that but you can also buy the Amazon Kindle app for the iPad, which gives you access to any Kindle books, magazines and newspapers purchased or subscribed to from the Kindle Store. So on top of that you can access Apple’s Newsstand, which enables you to read magazines that are either in the original print format, or specially redesigned to make the most of the iPad display.

Which is better: Kindle or iPad for reading?

The original Amazon Kindle and Kindle both use e-ink (electronic ink.) This only refreshes when you move to the next page, this compares to the constant refreshing found on most tablets (or a computer). Some people believe that it is easier on the eyes to read on an e-ink display. However, we find it easy to read on an iPad with Retina Display for prolonged periods of time.

We also find it easier to flick around books on the speedy and responsive Apple iPad, whereas the Kindle can seem a little clunky when you do anything more than move to the next page.

The stock Kindle and Kindle Paperwhite both have a distinct battery advantage over the Apple iPad or Kindle Fire HD. Amazon advertises the Kindle as having a one-month battery life, so it’s great for taking on holiday; likewise the Kindle Paperwhite battery lasts for weeks, according to Amazon. The Apple iPad has an impressive battery life of around 10 hours, but it’s measured in hours, not days. The iPad needs recharging every day. 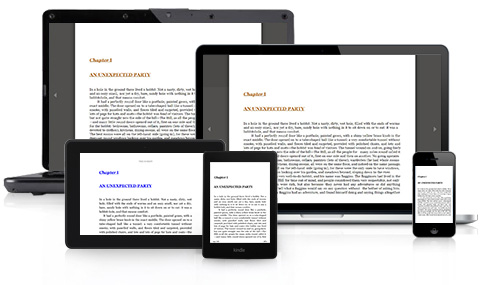 Both the Kindle Fire and Apple iPad mini share a lot of similar properties. Both are small devices with high resolution tutorials. They both run on ARM processors and run similar amounts of storage. The key difference is the operating system. The Amazon Kindle Fire runs a locked-down variant of Android, whereas the iPad runs iOS.

Where the iPad shines is Apple’s iOS operating system and the App Store. A wide range of apps available for the iPad ensures that you can do all kinds of things. The iPad has a lot of creative software like GarageBand, iPhoto and iMovie; plays with a wide range of business and presentation apps it’s considered a vital tool for the modern worker. So all this is on top of the usual books, movies and games that you can use as entertainment.

Amazon has a big lead on price, with the Kindle Fire starting at £119. Although it’s the Kindle Fire HDX that Amazon wants you to buy. This is £199 but has a faster processor and newer operating system, along with Amazon’s heavily touted Mayday service (where it has built in connection to a video chat helpline).

For its part Apple has the iPad mini which starts at £249, but really it’s the iPad mini with Retina Display (£319) that’s closest in terms of hardware. This higher-quality Retina display makes it ideal for reading.

You might be wondering why anybody should pay so much extra for the Apple iPad? It’s a valid question. A lot of the answer lies in the software, and what you can do with an iPad, rather the hardware.

Should you buy a Kindle Paperwhite or an Apple iPad?

Whether you should buy an original Amazon Kindle, or Kindle Paperwhite, instead of an Apple iPad, is a somewhat more complicated question. The Apple iPad is undeniably a more technically powerful device, so much so that it’s a slightly unfair comparison. Whereas the Kindle and Kindle Paperwhite only act as book readers, the iPad is a much more comprehensive device. Having said that the Kindle starts at £69 compared to the iPad mini’s £249: so if all you want to do is read books in an electronic format it’s worth veering towards the Kindle. However we think it’d be a real shame to miss out on all the extra features that a proper tablet like the iPad has to offer.

Should you buy a Kindle or an Apple iPad? Conclusion

In most cases, we’d advise you to go for the Apple iPad over the Kindle. If all you want to do is read books then the Kindle makes a good book reader, but it’s limitations soon become clear. Most technology users treat the Amazon Kindle and Amazon Kindle Paperwhite as a second device that augments their iPad, rather than a main device. While the Amazon Kindle Fire HD and HDX both offer functionality more similar to the iPad, we’d rather have the range of creative apps that Apple offers on its device. We think it’s all this additional functionality that makes the iPad worth the money in the long run.