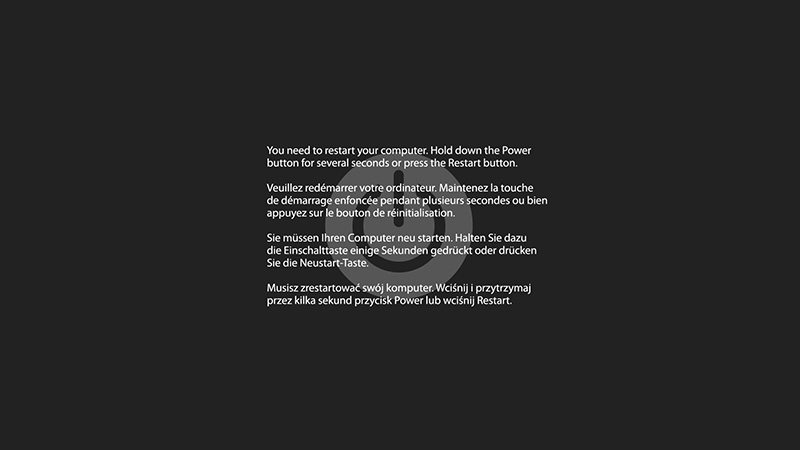 Apple Mac computers are remarkably stable machines, and you’ll spend a lot less time fixing a Mac, to get it working, than other computers. Even so, mistakes do happen, and when one does you will get an error message on the screen. It will say something like “The Application quit unexpectedly”. Understanding these Mac OS X error messages can help you fix what’s wrong with your Mac.

This is one of the best-known Mac OS X error messages. One minute the app was there, the next it’s gone. It’s a pain but normally it happens infrequently, so it doesn’t get in the way of things. Restart the app and see if it behaves itself this time.

If you find it happening frequently to the same app then follow these steps:

See: How to uninstall a software application from Mac OS X 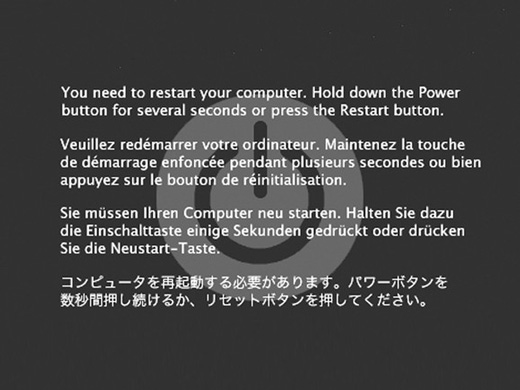 This one is rare, but it’s certainly an attention grabber. Your Mac freezes; the screen turns grey and displays a large power on/off symbol, and it says in several languages “You need to restart your computer”. This message is the impressive-sounding Kernel Panic. The Kernel is the part of the Mac that sits between Mac OS X and the hardware. Mac OS X throws up this error when it detects an internal error that it can’t recover. This is the Mac equivalent of the Windows blue-screen-of-death.

You’re not likely to see a Kernel Panic very often, so it usually comes as a surprise when it happens. Hold down the Power Button to turn off your Mac, now press it again to Restart. It usually won’t’ happen again, but if you find a Kernel Panic happens frequently then it could be a sign that something is wrong with your Mac hardware, either the RAM might not be fitted properly or there might be a problem with the graphics card. 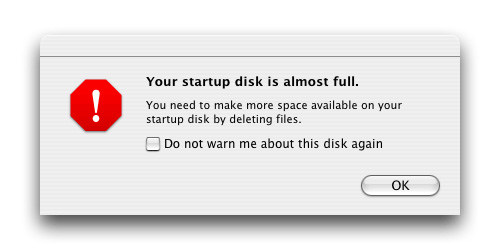 Know Your Mac error: Your startup disk is almost full

Like the name says you’ll get this one when the hard drive is out of space. The fix is pretty simple, free up some space on your hard drive. Here are some ideas;

See: How to get more space on your Mac

Know your problem: You can’t open the application because it is not supported on this type of Mac

A program will produce this error if it can’t run on the updated Mac OS X Mavericks operating system. You need to update the affected program because recent versions may work with Mac OS X Mavericks. Usually developers release a Mac update to coincide with an Apple Mac OS X update, or shortly afterwards. If there isn’t an update, you need to get in touch with the developer. If you have to use that program then consider rolling back Mac OS X to an earlier edition. 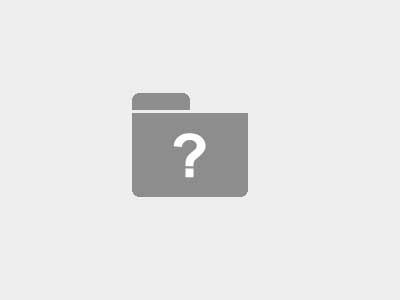 Know your error: Mac displays a folder with question mark

This error indicates that Mac OS X can’t find your hard drive. Macs can start up from multiple drives including external drives, and when one is used as the startup drive, but then disconnected this error may appear. It may also indicate something wrong with your Mac’s internal drive. Hold down the Alt key when starting up your Mac to see if you can re-select the internal hard drive. If that doesn’t work, you might want to consider using the Recovery Partition to reinstall the Mac OS X operating system.

Sometimes a program crashes of its own accord and displays an Error Report. This error report is a list of information that the developer uses to fix common problems. Click OK to send it to the developer, but don’t expect a personal response. The data is usually collected and used to identify general problems, rather than your specific problem. If it happens repeatedly try removing the program’s preferences from the Library or removing the preferences and deleting, then reinstalling the app.

There are a range of other error messages that can appear on your Mac. These can be all kind’s of things and are too numerous to enter here.

Step 1. Try turning it on and off again. No, seriously. Do that and see if it helps. Do your best Roy impression from the IT Crowd for a laugh if it makes it easier. However it’s always worth doing this before heading to Step 2.

Step 2. Perform a software update. Click on Apple > Software Update and make sure everything is up-to-date.

Step 3. Repair permissions. Repairing Mac OS X Permissions is one of those catch-alls that fixes a wide range of errors. Fire up Disk Utility, select your main drive and click on Repair Permissions.

Step 4: Try unplugging devices from the Mac computer one at a time. See if the Mac behaves better with devices unplugged. While unplugging unruly devices isn’t a fix, it can help you identify what is causing the problem. Updating corresponding software and firmware often helps in these circumstances.

Step 5. Cut and paste the error message into Google. Apple used to maintain error logs for Mac OS 9, but since Mac OS X is more stable, and the internet came along it’s better to enter error messages into a search engine. Rather than try to figure out what’s up by entering a description term into Google, you can copy the text from the error message. Paste this into Google and see what comes up. You’ll rarely be the first or only person to encounter the error message, and there are lots of shared experiences and fixes out there.