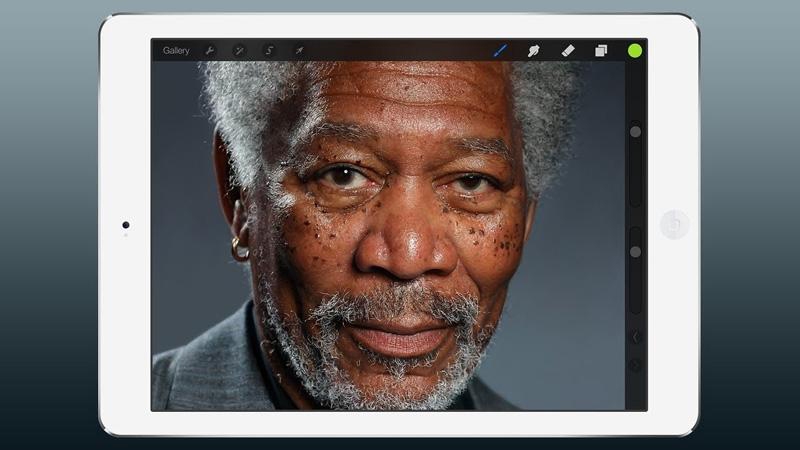 In a world where technology is taking over every facet of life, it’s no surprise that the unstoppable force has seeped its way into the art world. While most people probably only think of iPad and iPhone art in the context of a half-hearted Elvis stick figure sketched at the height of the Draw Something craze, many artists have been seriously exploring this medium with some pretty mind-blowing results.

Let’s start with Kyle Lambert, a UK-based freelance visual artist. He’s risen to prominence recently for his incredibly realistic iPad portrait of Morgan Freeman. No, that is not a photograph in the video still below – it’s a drawing that a human made with his fingers using the Procreate app (£3.99) for iPad. Check it out:

It’s unbelievable. Some people literally can’t believe it, but those who doubt the legitimacy of his work should check out Lambert’s Beyoncé iPad portrait. This one is more plausible as isn’t quite as unnervingly spot-on as the Freeman portrait, so it shows the true legitimacy of iPad as a valid art medium. Lambert used the free Brushes app to create this portrait:

In an interview with Nomad Brush, Lambert talked about how he first discovered the iPad as an art tool.

“Initially, I was curious if it would be possible to create artwork of any value using a touchscreen device,” he said. “I spent about an hour or so with the first iPad, and I knew right away that it had the potential to be more than just a fancy entertainment device.”

Artist Jorge Colombo, another Brushes user, has had his iPad artwork published in a place most illustrators can only dream about: the cover of The New Yorker.

Though he originally started drawing digitally on an iPhone, he has since switched to iPad and hasn’t looked back.

“…At the time, I liked being able to work so small,” he said. “I got so used to the size that the first time I used the iPad, it felt like I had a pinball machine in front of me. In time, however, I became more proficient on the tablet and started using more lines and more detail. To the point that now, it feels primitive indeed to draw on the iPhone.”

We also have Seikou Yamaoka, a Japanese artist who gave up his art dreams for a desk job. When he started to really miss making art, he downloaded ArtStudio (£2.99) on his iPad and started playing with it on his morning commute to work. And he got really, really good at it.

Like Colombo, Yamaoka didn’t necessarily need a huge screen to create a masterpiece – he drew this beautiful “Girl with a Pearl Earring” replica using ArtStudio on an iPad mini:

Yamaoka said the portability of an iPad is a huge plus over traditional art forms.

“When you paint watercolours you have to prepare all sorts of tools in advance – paper, a pallet, paints,” he said. “But to create art on an iPad or iPhone is a whole different world. All you need is the device and your finger. It really allows you to make art anywhere.”

David Kassan is another artist who appreciates the convenience of iPad art.

“It’s just like a portable, full-colour sketchbook that is easily accessible and easy to just pull out of my bag and start working,” Kassan said in an interview with Laptop Mag. “So instead of pulling out a whole bunch of watercolours or oils and a canvas, you can just sit there and do something that actually looks very similar.”

Kassan completed this portrait over the course of three hours using the Brushes app.

He said he’s convinced that the iPad will make art more accessible to casual art hobbyists who might not have the patience or space for a traditional studio setup.

Kassan said he is a “huge fan” of ArtRage (£2.99) because it looks the most like real oil paint, but he recommends Brushes for beginners.

“[Brushes is] very simplified; there isn’t much to it, but it looks more like Photoshop, so everything’s got a flat, airbrush-y quality to it,” he said. “Those two [apps] I find the most intuitive for people to pick up and use easily.”