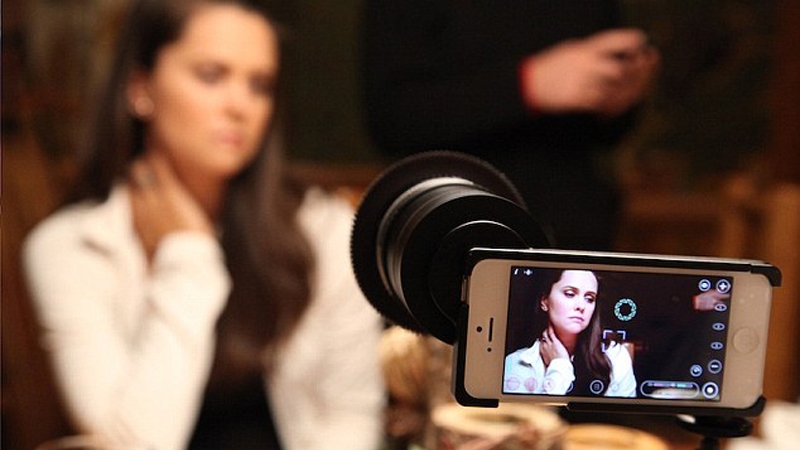 Most iPhone users already know that as long as they have their smartphone in their pocket, they have access to a really high-quality camera at all times. Some may not realise, however, that even professional filmmakers – arguably the very best judge of film quality who base their livelihood on picture-perfect images – tend to agree with that notion. Some directors are even turning to their iPhones as a legitimate filmmaking medium, producing high-quality projects with a device many people use hourly.

Uneasy Lies the Mind, a new indie psychological thriller, has been billed as “the first narrative feature film to be shot entirely on the iPhone”. The story is told through distorted memories of a man who has suffered a severe head injury, so sharp images were not necessarily filmmakers’ end-game with this movie. They considered using grainy 16mm film, but ultimately decided that it was more affordable to achieve a similar look using an iPhone 5.

“The iPhone ‘look’ that I created fit the story, mood, tone, and the character’s inner psyche way more than any other traditional camera could have,” director Ricky Fosheim told Gizmag. “I’m not advocating for everyone to go shoot their next movie on the iPhone, but if you can find a creative and plausible way to make it work, then I would encourage you to take as many risks as you can and try to push the limits in the ways in which we tell stories.”

Fosheim said he controlled parameters such as white balance, exposure, frame rate and compression using the Filmic Pro app. A Turtle Back lens adaptor was added to the phone in order to shoot with proper Nikon Cinema Prime lenses (although the output from those lenses was ultimately still funneled through the iPhone’s existing lens). The sound was recorded on a separate system and the final film was put together in Final Cut Pro 7.

Though the iPhone video camera was perfect for convenience and portability, it predictably had its downfalls compared to standard professional film equipment, including a relatively low battery life and trouble performing in cold weather.

“In between takes we would have to place the camera underneath our armpit in order to keep it warm,” Fosheim said.

Though Uneasy Lies the Mind might be the first “narrative feature film” to be shot entirely on the iPhone, it is far from the first professional-quality iPhone film to be made. Let’s take a look at some of the other high-quality iPhone movies out there.

Just last month for the Mac’s 30th anniversary, Apple released a 125-second iPhone 5s video chronicling the company’s fulfillment of its promise to “put technology in the hands of the people” over the course of one day. It’s a must-see for Apple fans and really shows off the camera quality on the iPhone 5s:

Even the Academy has recognized the legitimacy of iPhone filmmaking, as demonstrated in Searching for Sugar Man, the Oscar-winner for Best Feature Documentary – though, admittedly, only a few scenes of the movie were shot with an iPhone when director Malik Bendjelloul ran out of money. The majority of the film was shot on Super 8mm film, and the iPhone scenes were shot with the 8mm Vintage Camera app, including the bar scene in the beginning of the movie where the producers discover Rodriguez.

iPhones have been used to shoot amateurish music videos for years now, but professional-grade videos can be achieved as well. Artist Flakjakt (Steve Failows) and director Marty Martin collaborated to create an original song, “Cascades”, specifically for this iPhone 4 shoot. The video claims to be “the first official music video shot with an iPhone”:

“156 Turns” was shot with the iPhone 4s three days after its release and is billed as the “first corporate” iPhone film. The film was shot with an Owle Bubos lens with no colour correction:

And sometimes the best videos don’t serve a higher commercial purpose, but rather have a single focus on demonstrating incredible imagery. This Vimeo “Staff Pick” video of Thailand was shot by Andrew Melikov with the iPhone 4S, edited with Final Cut Pro, and colour-corrected with Colour Finesse 3.