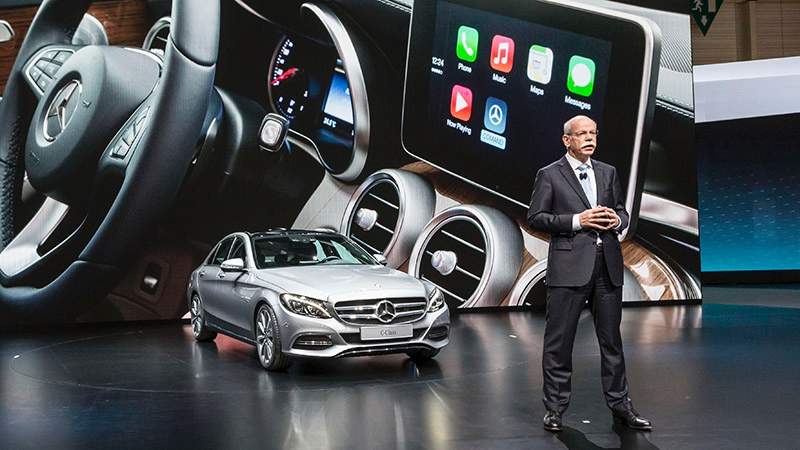 CarPlay is an integrated display system that will be provided as an optional extra when you buy a new car. CarPlay consists of a large display that sits on the dashboard of your car. Users plug their iPhone into the CarPlay system, and use a mixture of Siri voice commands and touch-screen controls to interact with CarPlay.

(If you want to know what other Apple brands and related tech terms mean, take a look at our  Apple user’s jargon buster.)

Apple CarPlay will serve up Apple Maps, make Phone calls, display Messages, and play Music. Much as the current iPhone does when you are in a car, the difference is that you will have a screen integrated with your automobile.

Read: How to play music in your car from your iPhone

How does CarPlay work?

It is up to each manufacturer to implent their version of the Apple CarPlay system, so different versions of CarPlay have a different control implementation. Two options seem to be available: Siri (activated by touching a button on the steering wheel) and touch-screen. You will be able to interact with CarPlay by pushing a button on the steering wheel and speaking to Siri. Some CarPlay systems will also have a touch-screen display enabling you to use iOS-like icons. Some CarPlay systems use a combination of Siri button control and touch screen control. Mercedes-Benz is using a pure Siri with button approach, whereas Ferrari is using a combination of button control and touch screen.

Ferrari, Mercedes-Benz and Volvo previewed the CarPlay system in Geneva, with lots of other manufacturers saying they plan to adopt the system. It certainly seems to have widespread support from the auto industry.

Here is a list of manufacturers bringing CarPlay systems in 2014:

These manufacturers are referred to by Apple as “commited partners” and are expected to introduce CarPlay at a later date:

When is Apple CarPlay available?

The cars demonstrating CarPlay at the Geneva Motor Show are all this year’s models, and will be on sale shortly. Apple is going to introduce CarPlay functionality in an iOS update (we assume this will be iOS 7.1). The Mercedes C-Class Coupe 2014, pictured at the top, is listed as Early 2014.

What does Apple CarPlay tell us about the car industry?

That for an industry based upon speed it moves incredibly slowly. After all, Apple has been the serious market leader in the smartphone market for several years now, and Google is its competitor, but it’s taken until now for car manufacturers to start working with either Apple or Google to implement a system. In some ways this is understandable, after all a car can be several years in development, and it has to undergo far more rigorous testing than most consumer electronic devices. Cars are typically on sale for 10 years, and a good car can have a ‘design-to-dust’ lifespan of up to 25 years. This is a outrageously long time in the technology industry. So the car industry likes to make sure that when it implements a technical solution, then the things its working with are sticking around.

What does CarPlay tell us about Apple’s future direction?

Apple’s new management may be a little more eager to allow car manufactures into the planning stage than before. Part of the problem for Apple with the automotive industry has traditionally thought to have been that it likes to surprise the public. This works when you’re surprising customers with a new iPad, but it scares off the likes of Mercedes-Benz, who want to know what changes are being planned down the line. Apple announced its Siri-in-the-car intentions last year, so we assume its been working with key car manufacturers since then. Or it could be that Apple simply has enough leverage now to drag the automotive industry kicking and screaming into the modern world regardless.

What does CarPlay tell us about the phone industry?

That BlackBerry is well and truly done for, and is not coming back. The executive car industry did tap into the BlackBerry market with Bluetooth enabled dashboards that plugged into BlackBerry Phones. We know BlackBerry is done-and-dusted but now the car manufacturers have confirmed it.

Do I need an iPhone to use CarPlay?

Yes, CarPlay works with an iPhone. The idea is that you plug your iPhone into the CarPlay system and the larger CarPlay screen and integrated steering wheel button enables you to control the iPhone. Our understanding is that you need an iPhone with you to use CarPlay. Apple has said that the following iPhones work with CarPlay:

Can I get CarPlay for Android?

CarPlay is an Apple system so CarPlay will not work with Android Phones. But Google is teaming up with car makers to offer a similar Android-based operating system. Both CarPlay and Google’s system are expected to be optional extras, rather than standard accessories. So new car owners can choose the system that works for them.

How do I get CarPlay fitted to my car?

There doesn’t seem to be any option to fit CarPlay into a current car, although that’s not to say there won’t be such a system in the future. For now though it seems that Apple is providing CarPlay as an option for manufactures to include with new cars.

Is Apple CarPlay worth getting?

It’s too early to say if the system is truly compelling, and it is an optional part of a larger purchase. If we were buying a new Mercedes-Benz or Volvo we’d certainly ask for the CarPlay system as an optional extra. The integration with iPhone looks good, and the system on a whole is compelling. We look forward to testing out CarPlay when the cars come to market.