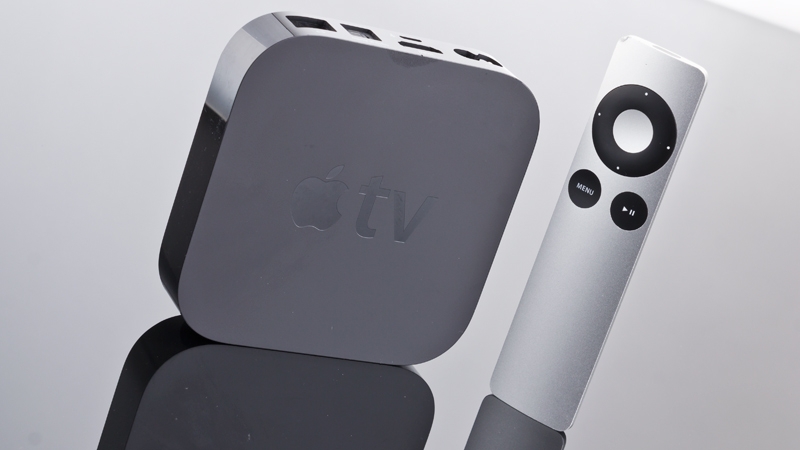 With reports suggesting that Apple will soon update the Apple TV we are hopeful that it will improve its offering of channels to the UK audience. We’ve been looking at the content options offered by the competition to the Apple TV here in the UK, and frankly Apple’s lack of attention to the British audience is embarrassing.

The popularity of catching up with TV shows online, as an alternative to watching them when they are broadcast, is illustrated by the fact that E4 often broadcasts an episode of a hit TV series online before it is aired on television. Plus, BBC Three has announced that it is closing its TV channel and instead streaming its programming online through iPlayer. With more and more people choosing to catch up with On Demand TV shows via their laptop or iPad, rather than watching TV shows when they are broadcast, the fact that Apple seems content to offer only Netflix and iTunes content to UK users seems short-sighted.

Sure, the inclusion of Netflix on the Apple TV allows us to binge on television box sets and a wealth of movies and documentaries, but every other set top box offers the same, plus a lot more.

Read on to find out how some of the best streaming devices available in the UK compare with the Apple TV in terms the ‘channels’ on offer and the price. We also examine why the Apple TV lacks an iPlayer app, and speculate on the Comcast equivalent that might help Apple provide a better service to Apple TV customers in the UK and Europe.

Apple TV: Apple boasts that there are thousands of films and TV programmes available on the Apple TV (£99), these are available to rent or buy from iTunes. In addition you can subscribe to Netflix (£5.99 a month). Beyond that the ‘channels’ on offer are limited, and generally US focused.  Familiar names include Sky News and the Now TV Sky Sports day pass (£9.99 a day), but when you consider that US users have access to Hulu Plus (subscription); HBO (subscription); various Disney channels; PBS; ABC and ESPN, the UK Apple TV users have definitely drawn the short straw. Hopefully Apple is working on bringing more On Demand services (such as iPlayer and 4oD) to the Apple TV here in the UK.  However, Apple’s main competition in this field, as you will see if you read on, already offer access to the UK’s on demand channels.

Roku: There are a collection of Roku boxes available, including the Roku 3 (£99.99) and the new Roku Streaming Stick (£49.99). Each offers UK users access to more than 450 entertainment channels. In the States there’s access to more than 1000 channels, so as usual the UK misses out somewhat. Users get access to films from Sky Movies via Now TV (subscription), Netflix (subscription), Popcornflix  (free) and Crackle (free). You can also catch up with TV via iPlayer, the Sky Store, and Demand 5. There are also hundreds of channels that don’t appear by default, discovered by browsing the channel store.

Google Chromecast: The Google Chromecast (£30) launched in the UK on 19 March 2014. You can watch content streamed or downloaded from Google Play movies and music and there’s also Netflix (subscription). BBC iPlayer was the only UK catch-up TV service to support the Chromecast at launch. You can also mirror any tab within the Chrome browser, whether using a PC or Mac. In February Google released its Chromecast SDK (software development kit) so you can expect to see more channels soon.

Western Digital: The WD TV Live (£89.99) lets you stream movies and catch up on TV shows via Netflix (subscription). As with the other solutions, there are a limited number of channels available to UK users but it does feature iPlayer, as well as Pop Flix (free classic TV and films).

Sony PlayStation: The PlayStation (PS4: £349.99, PS3: £149.99) includes iPlayer, ITV player, 4OD, Amazon Love Film (now called Amazon Prime Instant Video, £5.99 a month), Netflix (subscription), and the PlayStation Store. You can plug a PlayTV in to the PlayStation 3 to watch, pause and record Freeview TV channels (unit purchased separately) but this is incompatible with the PS4. Sony has announced that it will launch a cloud-based TV and video streaming service in the US this year.

Sky Plus: With Sky+ you can record, pause and rewind live TV, BBC iPlayer, ITV on demand, 4oD, Demand5, and the Sky channels. Unit prices depend on your subscription package. You can add the following packages: watch TV box sets from Entertainment Extra+ for £32 a month; access more than 800s of movies on demand for an extra £16 a month. There are also 1000s of movies to rent from the Sky Store.

Virgin Media Tivo: With a Virgin Media Tivo you can record, pause or rewind live TV, watch Sky channels, seven-day Catch Up TV, and view hundreds of on demand movies and shows, as well as anything on Netflix (subscription). You can also access UK On Demand channels including BBC iPlayer, ITV Player, 4oD and 5 Demand. Unit prices depend on your subscription package.

YouView: A YouView box gives you access to any of the UK’s free catch-up TV channels including iPlayer, ITV Player, 4OD, Demand 5, Dave on Demand, Milkshake (Channel 5’s children’s programming) and the 50+ Freeview HD channels. Some additional content available on demand. It also includes seven day scroll back TV for access to catch up TV from the UK’s On Demand services. The box costs around £229, but you can get it for free from TalkTalk or BT.

FreeTime: Like YouView, FreeTime includes access to BBC iPlayer, ITV player, 4OD, Demand 5 and there are around 150 Freesat channels available for free. You can use the TV guide to access the past seven days content from 26 channels. Also includes YouTube. Prices start at £96, but you pay more for the units that include storage space for recording., and you need to factor in the cost of the satellite dish and installation.

[Read more about these Apple TV alternatives in our article comparing the Apple TV and Roku, Chromecast, Tivo and more.] 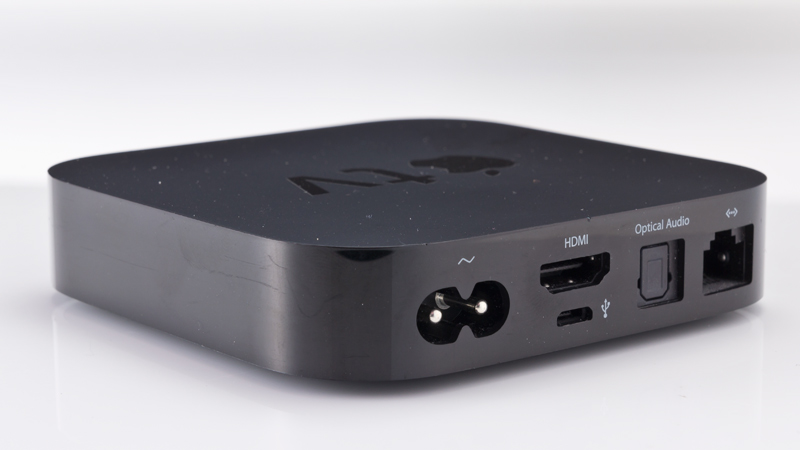 Perhaps the biggest criticism of the Apple TV is that it still lacks a dedicated iPlayer app – true you can stream BBC iPlayer from your iPhone or iPad to an Apple TV using AirPlay, but in that case all the work is being done by the BBC iPlayer app on your iPad or iPhone, rather than on the Apple TV, which is battery intensive work for the device.

The BBC has revealed that it decided to support the Google Chromecast at launch, despite still not offering iPlayer for Apple TV, because the “Apple TV currently works only with Apple devices.”

The BBC states on its website: “Chromecast has SDKs available for a number of different platforms including iOS, Android, and the Chrome browser for laptop and desktop computers.”

Although the Chromecast requires a mobile device or the Chrome browser to operate, it takes the streams directly from the content provider, not from your phone, and the Chromecast dongle does all the lifting of decoding and playing the video stream. This system is easier on the devices battery and more efficient in terms of network activity, explains the BBC.

Read: How to set up an Apple TV

Apple tuned out, left behind

The Apple TV has been left behind, with most of the competition offering On Demand content from the UK TV channels. If it wasn’t for Netflix the Apple TV would have very little going for it here in the UK. The lack of iPlayer is embarrassing given that Roku, WDTV Live, Sky+, Now TV, Virgin Media Tivi, YouView and the FreeTime, all offer iPlayer. Along with the Roku and WDTV Live, Apple laucks 4oD but every other alternatives to the Apple TV mentioned above does offer 4oD. Demand 5 is offered by Sky+, Now TV, Virgin Media Tivo, YouView and Freetime. And the ITV player also appears on Sky+, Tivo, YouView, Playstation and Freetime.

If Apple wants to be taken seriously in this space it really needs to join all the alternatives in offering this content. While it’s true that you can play iPlayer and other content on your Apple TV via your iPhone or iPad, we are still waiting for other on demand channels to gain the AirPlay capabilities that would enable them to stream both the visuals and the audio to the Apple TV.

Hopefully Apple will soon launch a new Apple TV. If the new unit doesn’t feature these On Demand channels then there will be a lot of disappointed Apple fans in the UK.

Apple and the cable operators in UK, Europe

There are plenty of reports regarding Apple’s rumoured negotiations with Comcast in the USA, but what about the UK and Europe?

When we looked into the equivalent of Comcast in the UK market, we discovered that Comcast sold its UK division to NTL back in February 1998. NTL went on to become Virgin Media, which is probably the UK’s closest equivalent to Comcast. Then, in 2013, Virgin Media was taken over by Liberty Global.

Liberty Global is the owner of 11 cable companies in Europe making it the largest cable operator in Europe with 18.4 million subscribers. It has a foothold in the UK, Poland, Switzerland, Belgium, Ireland, Austria, Slovakia, Hungary and the Czech Republic. It recently announced that it would acquire Dutch cable company Ziggo.

We think that if Apple is looking for the European equivalent of Comcast to do business with in Europe, Liberty Global would be the obvious choice as we discuss here in our article: Is Liberty Global, Virgin Media part of Apple’s plans for Apple TV in UK and Europe.