Apple’s CarPlay system places Siri on your steering wheel, and a iOS-inspired dashboard display enables you to interact with the iPhone while you drive. It was introduced by Apple in 2013.

Until recently CarPlay was only available when you bought a new car, however, now Pioneer has launched the SPH-DA120 which means that your car may be able to have a CarPlay system installed.

Here we look at this new CarPlay system as well as some alternative options for adding CarPlay, or CarPlay-like features to your car.

Pioneer’s SPH-DA120, shown in the video above, is the first after-market infotaiment system to run Apple CarPlay, so you no longer need to have a brand new car to be in with a chance of using Apple’s in-car software set-up. Alpine Electronics is set to launch a new Car Play system soon.

The 6.2in, 800×480 touchscreen display can be installed in the vast majority of modern cars in place of the existing radio or CD player, and it hooks up to your iPhone displaying information and making copious use of Siri to keep your attention focused on driving. Indeed, thanks to the Siri update in iOS 8, you can also say “Hey Siri” to start the assistant hands-free.

There are a limited number of apps available in CarPlay currently: Phone, Messages, Maps, Music and Podcasts. These aren’t fully featured app – features are limited, but that’s so you can use them safely on the move. 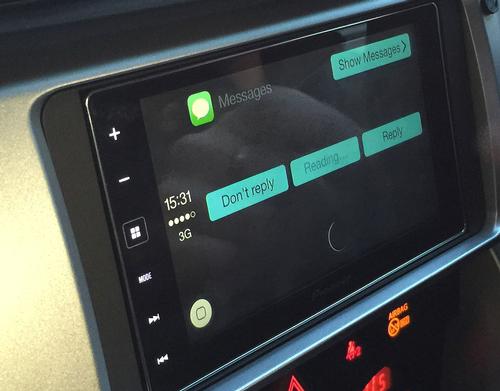 For example, in Messages you get the option to have Siri read out unread messages and incoming ones, but you won’t see the messages on screen, nor the transcript of what Siri says or what you say to Siri, and you certainly won’t be able to tap in a message on the screen. One issue with relying on Siri to compose and send a message is the fact that it relies on your phone’s data connection – and we all know how useless the data connection is on motorways in the UK.

As for sat nav, the only option is Apple’s Maps – you can’t use Google Maps or Tom (yet, we really hope you can in the future). You can ask Siri to “take me home” and have your iPhone plan a route from your location to your house, or you can ask Siri to find a restaurant nearby, but as a satnav, Maps is limited, lacking speed camera warnings and certain other features you’d find in a standalone satnav.

Luckily the sat-nav features don’t rely on the GPS inside your iPhone – the unit has a built-in GPS receiver – which is essential in built up London streets. 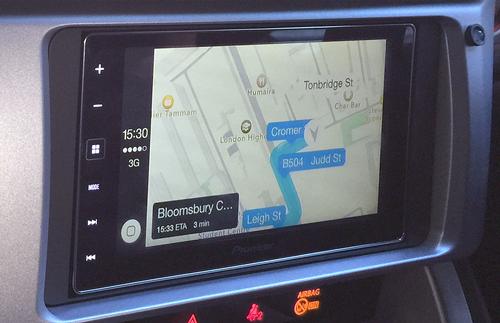 The unit also has a built-in microphone, so you won’t have to rely on those on your iPhone.

The screen resolution was good enough but we found it a little too reflective and hard to see in certain situations.

You’ll need an iPhone 5 or later to use the Car Play features.

The unit can also be used with a DVD player (with screens mounted into the car’s headrests), plus it is possible to have it display what’s behind you if you put the car into reverse. It can also work with other smartphones via a second USB because it supports MirrorLink. It doesn’t run Android’s answer to Apple CarPlay, Android Auto though.

The SPH-DA120 costs £349 and is available from Halfords, where fitting will set you back an extra £30.

You might also need to budget for converter cables if your car doesn’t have standard ISO connectors (most don’t) and also a special cable or adaptor if your car has an existing USB port, since it’s unlikely to connect directly to the back of the head unit.

Apple CarPlay is also available from a few car manufacturers including:

How to get ‘CarPlay’ in your car without paying a fortune

If you have to draw the line at buying a new Merc and don’t feel ready to part with £350 for the new Pioneer system in your car, there are some ways to set up a CarPlay-like system, or CarPlay’s features in your car.

One of the easiest ways to get CarPlay into your Car is to mount an iPad mini onto the dashboard. There are many stands available for the iPad mini, and although it is more common to mount an iPhone into the car, it is perfectly possible to mount an iPad mini. Many truck drivers use iPads rather than iPhone devices when driving because the larger display is easier to read. We think the iPad mini hits a sweet spot. You’ll need an iPad mini with Wi-Fi + Cellular to use its map features (because the Wi-Fi + Cellular model has GPS, a feature the Wi-Fi only model lacks). You could also use an iPhone, but we think the larger display of the iPad mini is a better replication of the CarPlay systems.

We think the iPad mini would be a good substitution for the CarPlay screen, but you will need to mount it into your car. 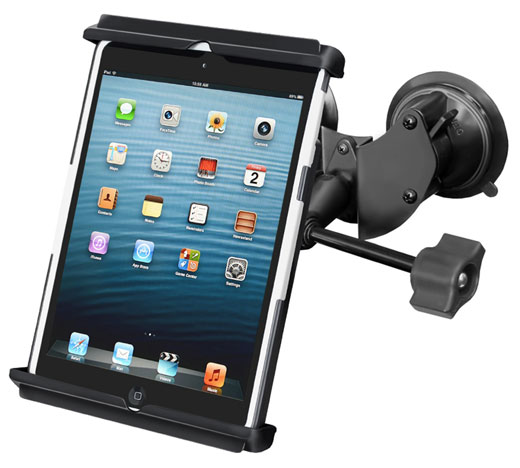 Finding a good mount for the iPad mini isn’t as easy as buying one for the iPhone. RAM Mount sells a good selection of iPad mini mounts: we’d suggest this Cup Holder mount called RAM-A-CAN II (£56.81). You can also attach the iPad mini to your windshield with the Double Suction Cup Mount with Tab Time for iPad mini.

Another great option is the TomTom ProClips system. This requires you to buy a mount and holder, but the holder is vehicle specific. You can purchase the ProClip Car Kit for iPhone and iPad models, so the TomTom ProClips is a good choice if you want a device that’s sturdy for your car.

Power your iPad mini or iPhone in the car

You’ll also need to provide power to your iPad mini or iPhone when it is mounted in the car. There are a wide range of USB chargers that plug into the cigarette lighter. We like this Belkin In-Car Charger with Lightning (£24.95) but in truth they mostly offer the same functionality.

How to put a Siri button on your steering wheel

Another key part of CarPlay is the presence of a button on the steering wheel. This is used to control the CarPlay screen via Siri. Controlling your iPhone with Siri becomes a whole new experience in the car, when you can’t use the on-screen display. Siri can be used to control everything from your music, to map directions to send and reply to messages.

One device dedication to this end is the Mobile Home by Beanco. This device connects to your iPhone (via Bluetooth) and enables you to access Siri at the push of a button. Mobile Home is only available from the US at the moment, but Beanco is selling it for $79 with $18.95 shipping. That works out at £59.36, which we think is a good deal for a Bluetooth Home Button. It works out about the same as many Bluetooth hands-free kits, which may work, but we think they complicate matters. 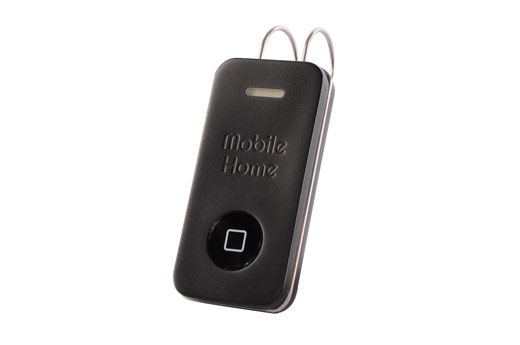 Connect Siri to your car speakers

If you have a Bluetooth speaker system in your car, you will be able to output the audio from your iPad, or iPhone, to your car speaker system. This provides a fuller CarPlay-like experience. It will also make it easier to hear directions as they are spoken to you.

If your car does not have Bluetooth, you can add it to your car using a system like the Scosche MotorMOUTH II. Or you can install a new car stereo with Bluetooth ( a selection are available at Amazon).

Set up CarPlay in your Car

Between these three items: dashboard mount, car charger, hands-free Home Button we think you have a pretty good alternative to a dedicated CarPlay System. The system we’ve described here costs £140 to setup (assuming you already have an iPhone or iPad mini). We think that’s a pretty good deal for a CarPlay-style system. Having said that, we still can’t wait to get our hands on a CarPlay system, and hope Apple brings CarPlay as an upgrade we can install in our current cars at some point down the line.

To use your CarPlay system just hold down the Home button on the Mobile Home unit. This will activate Siri on your iPad mini. You can now speak out your Siri commands to the iPad mini, which will respond through your car speakers.

Here are some of the things you’ll be able to do with your home-built CarPlay System:

Ask Siri for map directions. Use the iPad for sattelite navigation. Check the weather at any location. Check your e-mail. Ask Siri to send a message. Ask Siri to place a phone call. Look for nearby restuarants, petrol stations and other businesses. Create reminders.