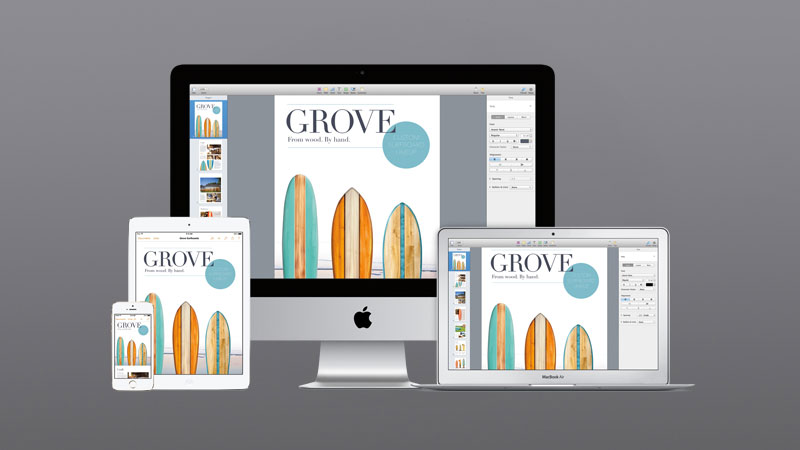 What is iWork? iWork is Apple’s answer to Microsoft Office and Google Docs. It comprises of word processor Pages; spreadsheet editor Numbers; and presentation designer Keynote. Apple prides itself on the simple user interface and the integration with it’s full range of products: It’s available for Mac, iPad, iPhone and also as a online version. The online version of iWork was launched as iWork.com back in January 2009. The web based software is still in beta.

You can buy Pages, Numbers and Keynote on the Mac App Store for £13.99 each, but they come with any new Mac, and if you already own a copy of the software the update to the latest version will be free. The same is true of the iOS versions, each costs £6.99, but are free to new owners of iPhones and iPads, and a free update if you already own the software. The iCloud version is free to use and can be used on Macs and PCs, all you need is an iCloud account.

You can read our reviews of the following iWork apps:

Updates to Pages, Numbers and Keynote

Apple regularly issues updates to its iWork app, adding features and developing the apps. Here we look at the most recent updates.

In November 2014 all three iWork for iCloud apps have gained new fonts – 50 in total. This brings the number of fonts in iWork for iCloud to 72. It’s not quite as many as you will find in the Mac version, but it means Apple has more than doubled the number available. There are some nice handwriting fonts for those who are fans of Comic Sans-style fonts.

Here’s a look at the new fonts in iCloud Pages compared to Mac Pages: 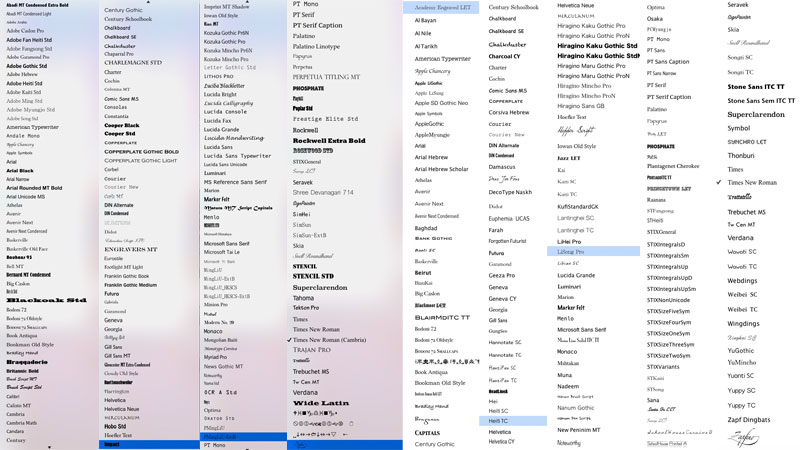 All three apps now allow you to drag a wedge from a pie chart  – so you can draw attention to that part of your story, or just make your pie chart look more interesting. 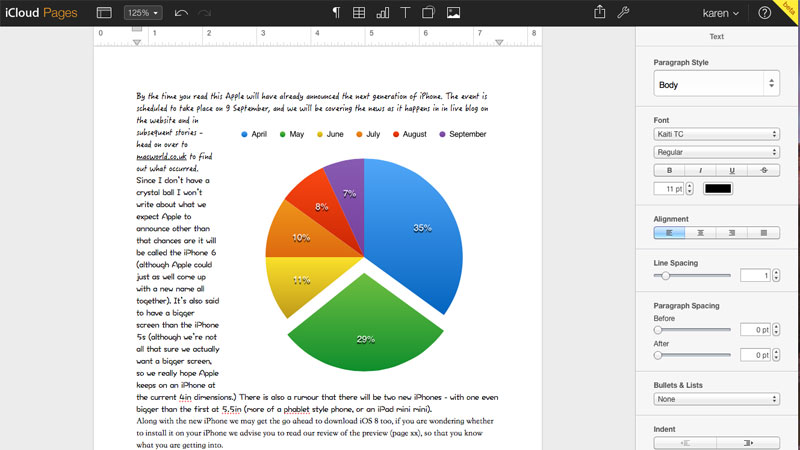 Here’s a run down of the new features added in the November updates to Pages, Keynote and Numbers in the Cloud:

The big news was the new versions iWork for Mac and iOS, which came with the launch of Yosemite. All three apps gained support for Handoff and the ability to save documents directly to iCloud Drive.

Numbers is now at version 3.5, and with the launch of Yosemite it gained the following features. The review of the latest version of Numbers is here.

Apple made a few more updates to iWork for iCloud in June, these included the following features that aid the transition between iOS and OS X versions of documents.

The latest updates bring the cloud-based versions of Pages, Numbers and Keynote into line with the current Mac and iOS versions. For example, if you edit the zoom level, or close on a particular worksheet or slide, iCloud will remembers where you left off.

The iCloud version will also remember the user’s most recent screen name when accessing collaborative documents and spreadsheets.

There are also new tips available to help users use basic functions like copy and paste, and new shortcut commands are now displayed in a pop-up menu in the iCloud version of Numbers.

Image manipulation is also easier: if you right click an image you will see a dynamic masking tool for cropping and resizing graphics.

Apple updated iWork for iPad, iPhone, iPod touch, Mac and iCloud, in April, adding new features and improvements to Pages, Numbers and Keynote. The updates came less than a week after the launch of Microsoft’s Office for iPad.

On 1 April, users of Apple’s web-based iWork applications were greeted by updates that include graphics tweaks that add Retina display support, usability enhancements and new sharing options. There are also new features in the iOS and Mac iWork apps.

Below is a closer look at the new features in Pages, Numbers and Keynote, but if you’ve found that you have shared documents in iCloud that can’t be edited this morning, try duplicating the document or spreadsheet by right clicking, then opening the duplicate and sharing as usual.

Users of the iCloud version of Pages will now find that the document editor has a new look, with improved text wrap and new document templates. Charts in imported documents are now editable, and there’s a new ‘view only’ option that means shared documents cannot be edited by the recipient.

Version 2.2 of Pages for iOS also includes the ‘view only’ option, as well as other new features such as new search options, import, export placement and bidirectional text improvements and usability improvements.

Version 5.2 of Pages for Mac has been given the aforementioned ‘view only’ option too. Other changes include the ability to delete, duplicate and reorder sections using the page navigator and the ability to create custom data formats, while improvements have been made to imports, exports, copy-paste style, placement, Instant Alpha image editing, Media Browser and search, AppleScript, di-directional text, text box behaviour, EndNote support and more.

The update to Numbers for iCloud brings some visual tweaks and the usability and sharing enhancements mentioned above. There’s also the ‘view only’ option.

Version 2.2 of Numbers for iOS also has the ‘view only’ option, plus the new ability to search spreadsheets by name, a progress indicator for calculations, improved Microsoft Excel and more.

Version 3.2 of Numbers for Mac includes the same improvements as the iOS version as well as new print setup and printing improvements, the ability to create custom table sales, better CSV import, usability improvements and more.

Keynote also got an update, with the iCloud version receiving a new design for the presentation editor as well as some other improvements, including the ‘view only’ option across all three versions of the app.

Version 2.2 of Keynote for iOS lets you use your finger to illustrate on slides while presenting, and also includes a new portrait layout option in the presenter display, new transitions and builds, detailed presentation import feedback, improved animation performance and improved bi-directional support. Search and export improvements have been made, too.

Mac users will now also be able to specify the start and end points of movies, control the z-order of bubble chart labels, allow objects on slide to layer with master and more.

For more information about the changes in each of Apple’s iWork apps, visit Apple’s what’s new page.

Let us know if you experience any issues with the web versions of the iWork apps and we will investigate and offer solutions below. 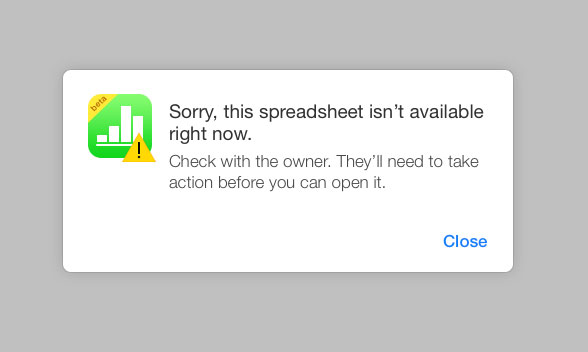 Problems with iWork in the Cloud – fixes

We are pleased to report that the issues we were experiencing with documents and spreadsheets shared with colleagues have now been rectified.

These issues began following Apple’s introduction of iCloud Drive with iOS 8. Following the release of the iOS 8 update, when we tried to access a shared Numbers document in our web browser we saw a message that the spreadsheet is not available.

Luckily the person who created the spreadsheet was able to access it in the Numbers app on their Mac. However, it was impossible to save it to the Mac’s hard drive.

When we tried to access the Numbers beta on the iCloud website we were told that to use Numbers we need to upgrade our account to iCloud Drive. 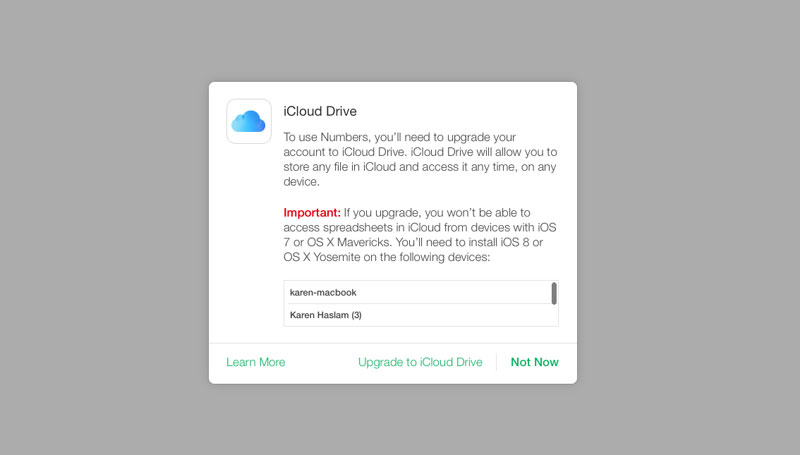 We were put off by the fact that the alert notes: “Important: If you upgrade, you won’t be able to access spreadsheets in iCloud from devices with iOS 7 or OS X Mavericks. You’ll need to install iOS 8 or OS X Yosemite on the following devices.” Yosemite hadn’t even launched at this point.

So it seemed we didn’t really have an option. If we chose not to update iCloud Drive (due to the warnings not to, and Apple’s own insistence that it won’t run in Mavericks), we wouldn’t be able to access the Numbers spreadsheet in any way other than via the Numbers app on the one Mac. So much for teamwork.

In the end we updated to iCloud Drive and were able to open the spreadsheet at last. However, we could no longer share the spreadsheet with our fellow collaborators. When click the Share icon > Share Spreadsheet we got a warning that Numbers for iCloud couldn’t connect to iCloud.

We tried various ‘fixes’ including duplicating the file and trying to share it again, but we still saw the same message that we couldn’t connect to iCloud.

What we ended up doing was cut and paste the data from our spreadsheet and then pasted it into Google Docs.

That’s what we have been using ever since.

So, when iWork was updated following the launch of Yosemite, we were excited to find out if our initial problems had been solved. When we tried to reopen the old spreadsheets that we used to collaborate on it took a while and there was an alert about it not being in sync. The collaborators were no longer associated with the spreadsheet either. And unfortunately when we tried to share the message “Sorry, something went wrong. This spreadsheet can’t be shared. You’ll need to duplicate this spreadsheet and share the new copy” showed up on our screen.

We made a duplicate, opened that (which took a long time) and this time we were able to share the spreadsheet.

How to solve iWork – sharing problems

If you have shared documents in iCloud that can’t be edited you may be able to follow this workaround.

2. Duplicate the document or spreadsheet by right clicking.

4. To share the spreadsheet, click on the people icon top right, and either email them the link, or cut and paste it and send that to them.

Here are some alternatives to the Apple iWork suite: