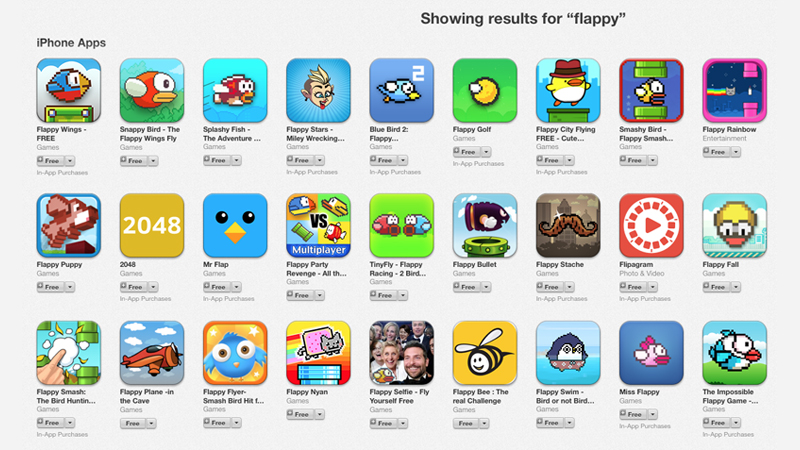 It’s only April, but – with respect to the wonderful FTL, our current darling – there’s a decent chance that we’ve already seen the best iOS game of the year: Threes, a magnificent puzzle game based around a simple but clever sliding-tile mechanic. It stood out at the time as the neatest, smartest and most addictive iPhone puzzler we’d played in months.

Threes doesn’t stand out quite as much as it used to, mind you, because its critical and commercial success was followed, with crushing inevitability, by a flood of clones. There are so many now that it’s hard to keep up.

The first copycat was probably 1024; this was succeeded by 2048, and when the makers of 2048 published the code for their game online, things really got out of hand. Adding to the confusion, many of the clones of that game also appear to be called 2048. A search on the App Store for 2048 now shows the extent of the problem: 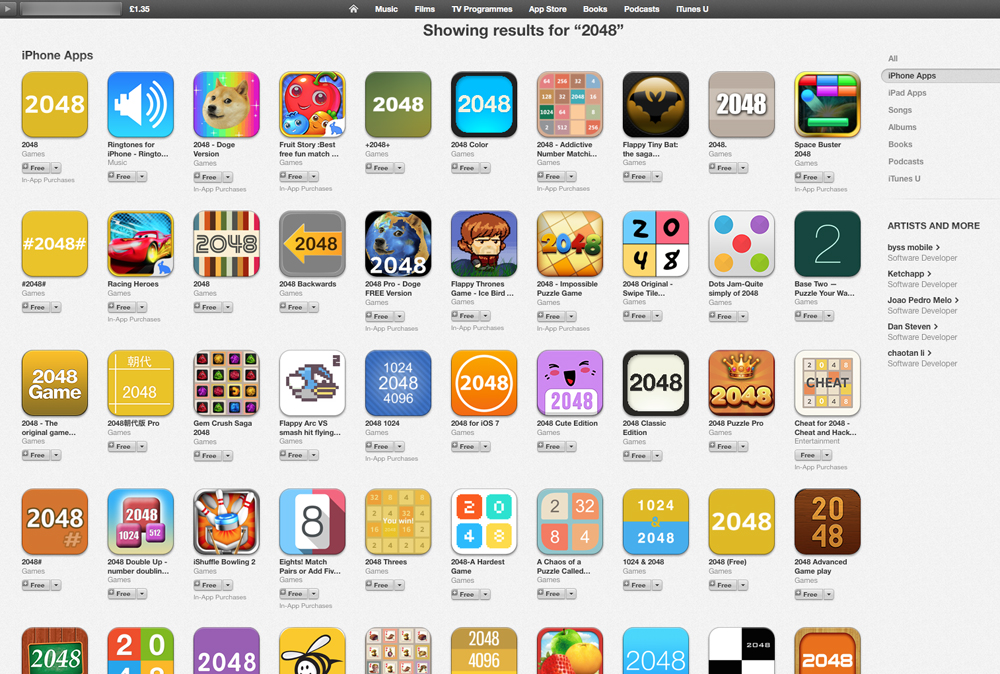 And the swathe of Threes-imitator-imitator-imitators isn’t even the worst attack of the clones 2014 has seen. Remember Flappy Bird? When that game (not a terribly good game, in truth, but one that people had fallen in love with) made it big, the clones turned up mob-handed, desperate to cash in. Flappy Bee, Flappy Plane, Flappy Vacuum Cleaner, Flappy Ombudsman, Flappy Alan Yentob… And when the game was pulled from the App Store and players were crying out for an alternative, things got really undignified. 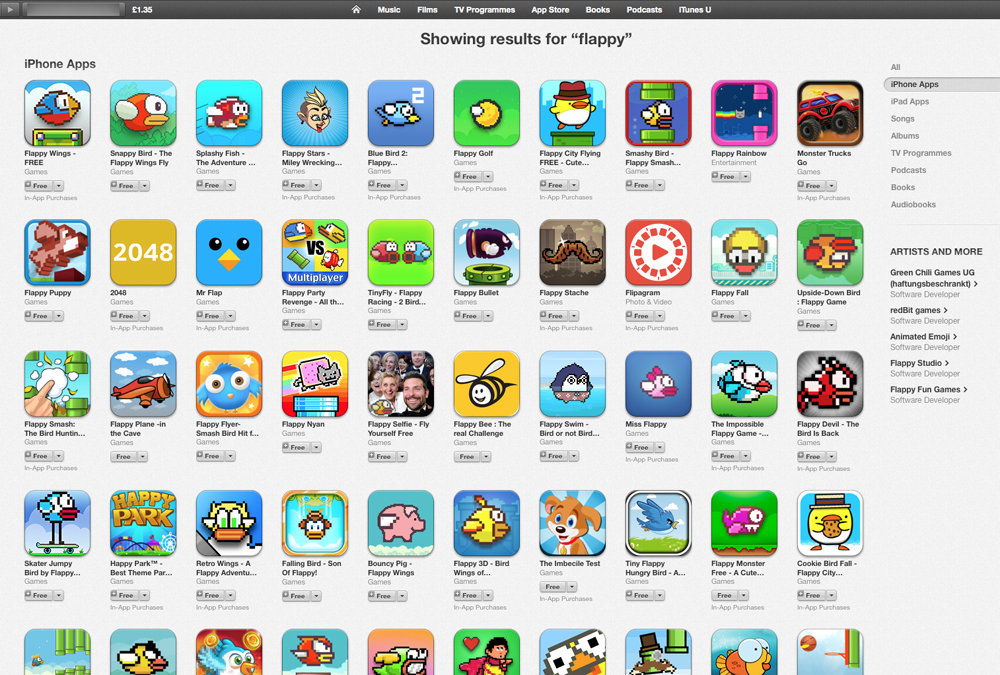 Here in iOS land we’ve long championed the higher quality of apps in Apple’s domain as one of the reasons why the iPhone and iPad offer a better all-round user experience than Android tablets and smartphones. The Google Play store is like the Wild West, we’d say: there’s no curation. People can put any old rubbish on there. But it would take heroic feats of one-eyed partisanship to claim that the App Store keeps out the rubbish entirely, or that the rubbish is even in the minority. And other than the very occasional serious security breach, clones are the big problem.

The App Store is still better than Google Play in terms of both attracting quality apps and keeping out the true scam artists, but it retains a tolerance for mid-level scumbaggery that irritates all of us who prize innovative software design. The shameless carpetbaggers who turn up hungrily after someone else has done the real work are a blight on the industry.

Anyone who puts in the passion and effort required to create something as perfect as Threes knows they will have only a few months’ grace – heck, the way these people operate, it could be a matter of weeks – before they’re swamped by virtually identical clones with slightly shoddier design, a free-to-play pricing model and a load of in-app purchases. Why would you put yourself in that position? Why would you take all the risk, knowing that others who risk nothing stand to gain much of the reward?

Apple and Google are aware of the problem of cloning, and it would be misleading to say they do nothing to stamp it out. When Flappy-mania was at its height, for example, both companies took action against new app submissions that followed that game’s template too blatantly. A game called Flappy Dragon was rejected (contains swearing), according to its developer, because Apple “found [the] app name attempts to leverage a popular app”. When the same game was removed from the Play store, Google told him not to “use irrelevant, misleading, or excessive keywords in apps descriptions, titles, or metadata”.

But both companies focus on technicalities, and take an approach that’s roughly analogous to the legal idea of ‘passing off’, which legislates against products that are likely to mislead consumers. So when Flappy clones removed the superficial similarities – Flappy Dragon had only to rename itself Derpy Dragon to get back on to Google Play – they turned a blind eye to their deeper borrowings.

Speaking to Eurogamer, one developer explained that Apple’s submission process doesn’t require assurances that an app is original in the way it works, just in the way it looks and sounds.

“There’s the usual stuff in the T&Cs about owning the content you’re uploading, but that just covers overtly ripped off assets – graphics, music etc. – not the functionality of the app or the gameplay,” the source said. “So, technically, clones would be exempt.” 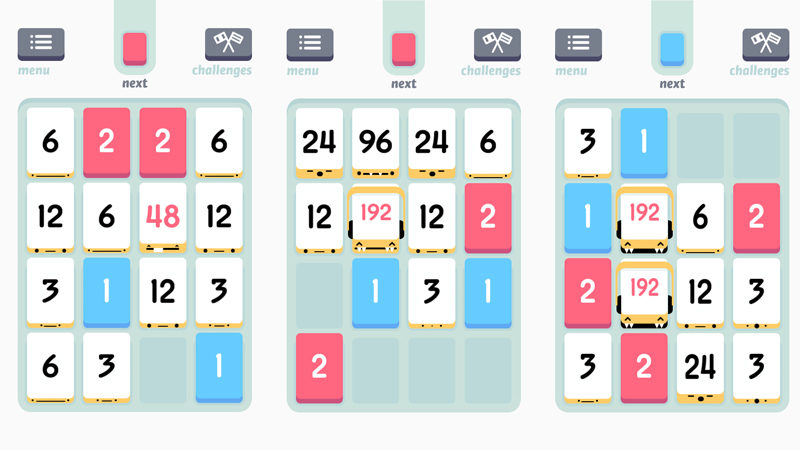 Threes: the original and best

None of this is to say that borrowing is a bad thing in itself, as Steve Jobs (borrowing from Picasso) was fond of pointing out. Great creative work always builds on what has gone before, and there are plenty of great games that would have been strangled at birth if a fiercely IP-protecting copyright lobby had its way. But the creative process is a synthesis of ideas: many minds, past and present, contributing to a larger whole. Clones don’t contribute anything.

While cautiously preferential treatment for much-copied original games – promotion, higher search ranking – would be a powerful way for Apple to preserve the distinction between its App Store and rivals’ messier, lower-quality alternatives, a legalistic or corporate approach probably isn’t the right way to deal with clones. It’s actually very difficult to copyright the way a game plays, and even if we could, we need to beware of pushing too far in the opposite direction.

Bizarrely enough, we’re currently seeing the ugly face of both sides of the argument at the same time. While clones proliferate on the App Store, King, maker of unoriginal Bejeweled derivative Candy Crush Saga, has started throwing its weight around over ‘trademark violations’. You have to admire the company’s sheer brass neck if nothing else.

What I would like to see is large-scale action from users. If there’s a stunningly original iPhone game and a lazy ripoff side by side, buy the original, even if it costs a couple of quid more. I propose this not out of a sense of morality – although God knows what some of these companies do is shockingly immoral – but because we need to reward innovation, and if the likes of Threes can’t make money, developers won’t be able (or willing) to make games that are as amazing as Threes. By choosing the rip-off, you’re not just harming the developer; you’re harming your own long-term choice of games.

If you doubt the work that goes into creating a beautiful little app, I would strongly recommend the lengthy and bittersweet post about the development process for Threes, The Rip-offs & Making Our Original Game. It concludes:

“Making these tiny games is littered with hard and painful times that are full of uncertainty and self-doubt. You never know if something is really going to work. It’s not easy. But cloning or ripping off a design in a week, that’s a bit different isn’t it?”

Read next: 11 innovations Apple ‘copied’ (but not from the companies you’d expect) 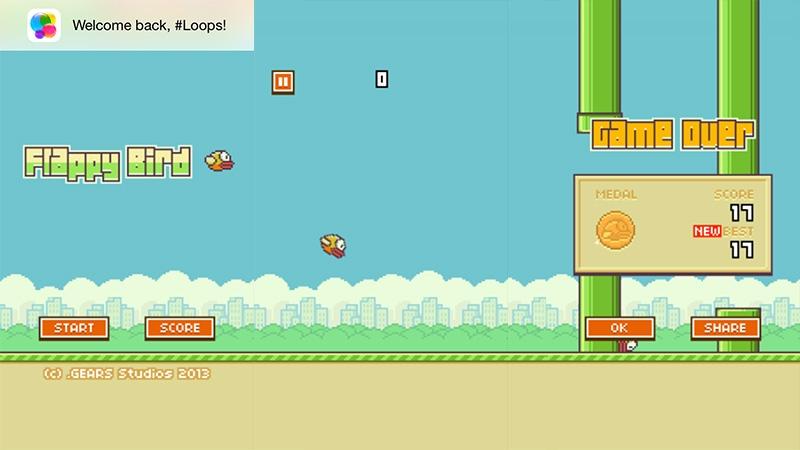 How to find the best apps on the Mac App Store