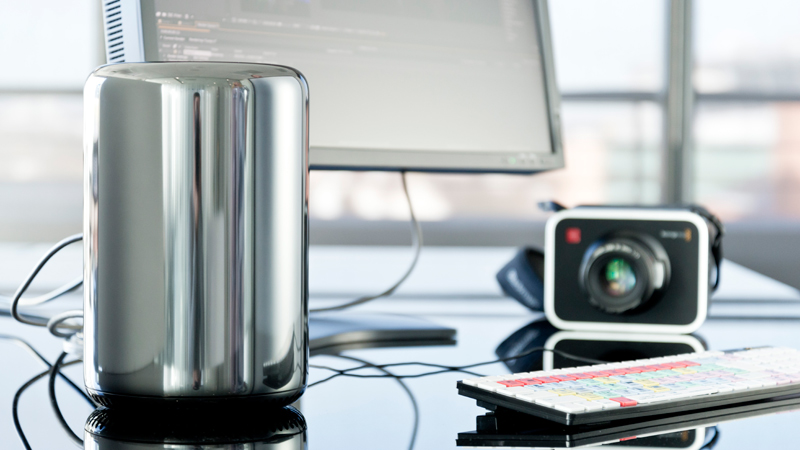 At the end of last year Apple finally updated its ultimate desktop Mac. The Mac Pro was proudly launched in a blaze of glory, positioned not only as the star of the Mac lineup, but promoted for it’s “unprecedented performance” and described as an “extremely powerful argument against the status quo”. Apple described the Mac Pro as “radically different,” “state of the art” and an “extremely powerful argument against the status quo”. The company even shot a dramatic cinema ad to promote the device. Clearly Apple was keep that the world should see it as a world leader in professional workstation design.

Of course, the Mac Pro is more than a pretty face – styled as it is in shiny aluminium – it truly is an impressive beast as you will have seen from our Mac Pro review. There may be a new Mac Pro on its way soon – read more here: 2014 Mac Pro release date, price and specs

The only problem is that while Apple does make professional software for the professional Mac user, this software is starting to look embarrassingly dated and some feel it offers poor competition to the alternative solutions that are out there.

For example, since Apple launched Final Cut Pro X in June 2011 there have been two major updates to Adobe’s video tools (three if you count CS 5.5 which launched a month before FCP X)

As for Aperture, Adobe’s Photoshop Lightroom has been updated twice since Aperture 3 was launched in February 2010.

[Read our comparison reviews of Aperture, Lightroom and other professional image apps)

Some will point to the fact that Apple has actually released major updates to Aperture and Final Cut on multiple occasions over the past few years. In fact there was a massive 10.1 update to FCP X in December 2013. These have been free updates, but they are none the less significant, and crucially free – which nobody is complaining about.

But people are complaining. Professional users of these professional apps feel cheated by Apple, they have wish lists of features that they want from the software (some of which were addressed by the December Final Cut Pro update that optimised FCPX for the Mac Pro, added 4k support and a simplified media management). However, many pro users are still not happy, as it would seem from the Facebook groups such as this one and if you look to the comments below this article.

Perhaps it’s already too late and swathes of pro Mac users have already left for the likes of Adobe, Avid and other software solutions. Perhaps it doesn’t really matter if they have, many of these apps now run incredibly well on the Mac Pro – although there was a intermission while many of these apps had to be adapted to utilise the dual graphics cards of Apple’s workstation. That’s presuming that these people stuck with the Mac when they made the switch to these non-Apple solutions.

Before Apple started promising that a new Mac Pro was in development (back in the summer of 2012) there were voices suggesting that Apple had turned its back on the creative community. The launch of the Mac Pro suggested otherwise, and yet it is beginning to look like the company has given up on professional app development.

If Apple doesn’t offer software to accompany the Mac Pro why would anyone think that it is serious about the pro market?

Then again, maybe Apple is wise not to dedicate resources to product development in a market where its margins are small. There is no need for Apple to develop software as well as hardware for this market, and yet, if Apple doesn’t make software for the Mac Pro will other software devs take Apple seriously, and will they stop Mac software development?

Whatever way you look at it, the Mac Pro is only half the story. As a company that is proud of its hardware and software heritage, it does see like a unpardonable lapse that the pro software is currently so neglected.

Watch this video to find out what’s inside the Mac Pro: