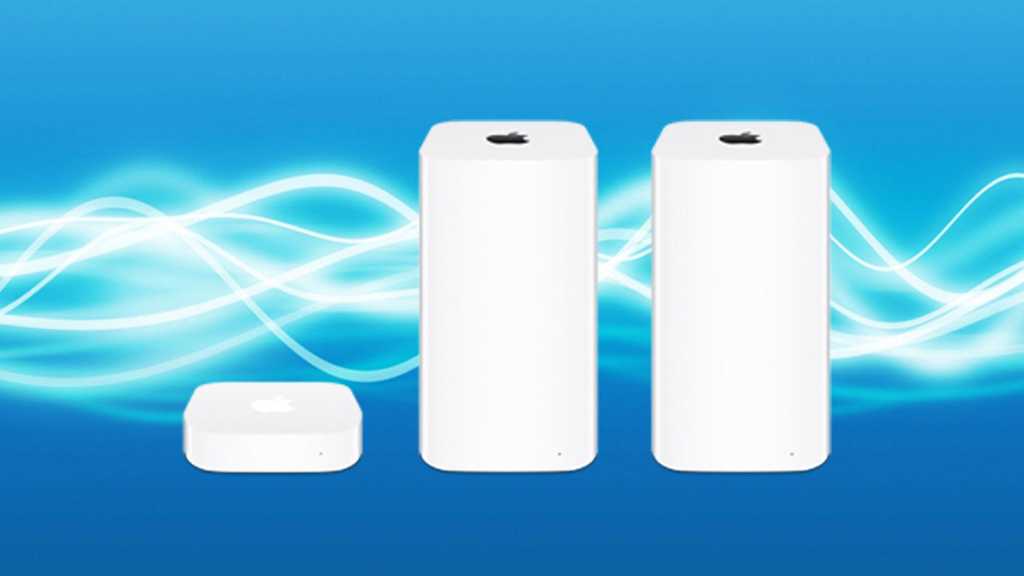 Apple started selling AirPort devices back in 1999, when it did so, Wi-Fi was in its infancy, and the ability to connect over a wireless network was a big deal. But times change, and in recent years, everyone we have spoken too had always been a bit confused about what Apple’s AirPort devices did, and what the point of an AirPort Base Station was. After all, these days most internet providers will give you a modem that does everything you need, why would you want to buy an extra product from Apple.

Well, it seems that Apple has decided there is no longer any reason to keep making it’s AirPort devices. On 16 April 2018, nearly 20 years after the first AirPort device launched, the company announced that it is discontinuing its Airport routers.

This news didn’t come as a big surprise, back in November 2016, a Bloomberg report claimed that: “Apple Inc. has disbanded its division that develops wireless routers, another move to try to sharpen the company’s focus on consumer products that generate the bulk of its revenue, according to people familiar with the matter.”

When stocks run out you won’t be able to buy an AirPort Express, AirPort Extreme, or an AirPort Time Capsule Wi-Fi router.

If you do already own an AirPort product, this doesn’t mean Apple is abandoning you, yet. The company has confirmed that it will continue to provide hardware and software support, and that it will help customers obtain required parts for for the next five years, at least for the current generation models – which were last updated in 2013.

What was the point of Apple AirPort?

Apple made a range of AirPort devices, known as Base Stations (now discontinued). These were essentially Wi-Fi routers: the AirPort Express, Extreme and Time Capsule.

One question we were often asked was: “What is the point of buying an Apple AirPort Base Station when you already have a router in your home?”

Others were puzzled by the difference between the AirPort Express and Extreme, and whether any of the Apple prodicts were tangibly better than the router supplied by your ISP.

Another question was, “What is the difference between AirPort and Wi-Fi?”

All of these questions are still valid for as long as you can still buy an AirPort router, so althought we wrote this feature prior to Apple discontinuing the AirPort, we have updated it and will still address these questions below.

What is Apple AirPort?

AirPort is still Apple’s brand name it uses for its Wi-Fi networking products using the regular 802.11b, g, n and ac standards. Apple started using the name AirPort way back in 1999. If you hear the word AirPort mentioned in conjunction with Apple it’s essentially referring to Wi-Fi products and protocols.

All Macs currently on sale are capable to linking wirelessly via AirPort to Wi-Fi networks, Wi-Fi printers (here you might hear the term AirPrint), and other Macs, iPhones, iPads and Apple products. Read definitions of more Apple-related tech terms in our Apple users’ tech jargon dictionary.

There were a number of AirPort gadgets you could buy from Apple, they may still be available for some time, Apple has said it will continue selling them “until stocks run out”:

We will look at each below.

It’s a small device, with the same footprint as an Apple TV, and it creates a Wi-Fi network. The unit features the 802.11n dual band antenna. AirPort Express still lacks the newer 802.11ac network as it hasn’t been updated by Apple for some years now. 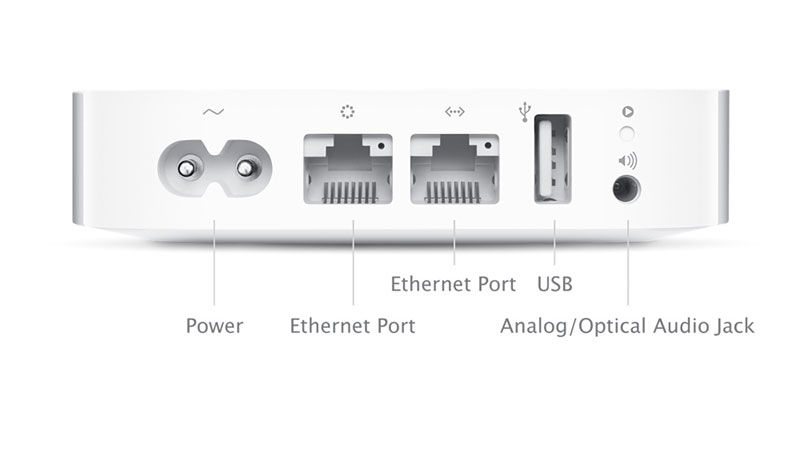 However, while it features AirPrint, so you can attach a printer it lacks AirDisk. So you can’t use the AirPort Express for wireless backups.

It also only has two Ethernet connections on the rear (and they are 100base-T rather than the new Gigabit Ethernet).

AirPort Express can also be used as a Wireless Access Point for up to 50 networked users.

Other than that, you might use an AirPort Express to extend your wireless networks to parts  of a house with weak signals. However there have been complaints of connections being throttled down by the Express. Read our AirPort Express review here.

The AirPort Extreme offers a step up from the AirPort Express with 802.11ac Wi-Fi technology, so you can expect faster Wi-Fi and a stronger, clearer signal.

The reason for the tall design is that the antennas are placed at the top – giving it a higher platform for dispersing the signal. Inside are six different antennae, offering dual-band wireless networks with support for all bands.

It also sports an internal power supply, so there is no need for a clunky external power unit.

Like the Express you can use the Extreme to make your printer wireless, and also to share a hard drive, essentially turning any hard drive into a network attached storage device (or NAS). 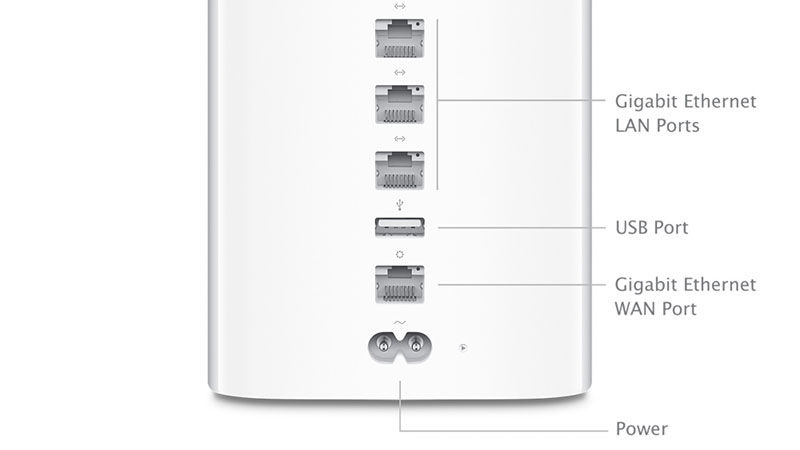 Back when we tested it, the Extreme recorded one of the fastest peak 802.11ac speeds we’d seen (at the time), breaking all records at 706 Mbps (megabits per second), before settling down for a still-impressive average of 578 Mbps at short range, and 540Mbps at the longer 10m distance. We recorded reasonable transfer speeds on 802.11n, too, with an average 105Mbps at long range.

However, in the years since the product launched there have been complaints of the AirPort Extreme overheating and sometimes losing signal. Read our AirPort Extreme review here.

The current model hasn’t been updated since 2013.

For the lowdown on the different routers you can buy for your Mac read: Best Mac router

Apple’s Time Capsule is essentially an AirPort Extreme wireless router with a built-in hard drive. It offers the same functionality of the AirPort Extreme, but, in addition, makes it easy to back up a Mac using Apple’s Time Machine software.

This means you can back up your whole system regularly wirelessly, so you never need to plug in a hard drive or other storage device.

If you’re thinking of buying a AirPort Extreme, it may be worth considering paying the extra to add the 2TB of storage and extra functionality of the Time Machine.

The current model was released in 2013.

What is the difference between AirPort Express and AirPort Extreme?

The AirPort Express can also be connected to a printer and this enables you to use AirPrint with any printer (so you can print from an iOS device). 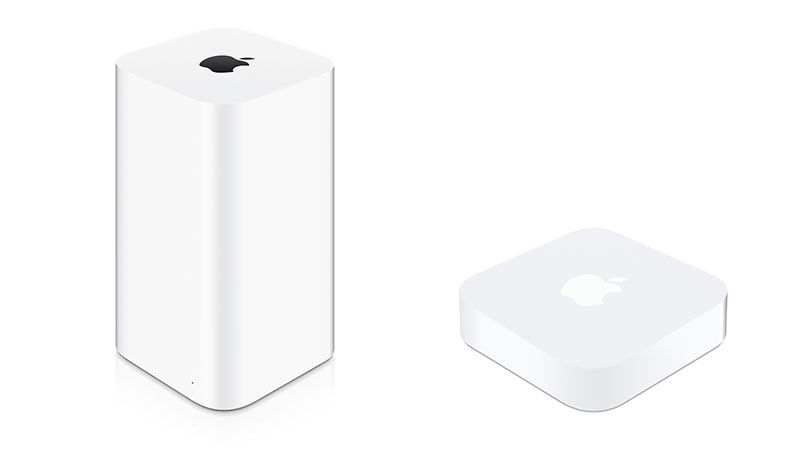 The AirPort Extreme does not have the 3.5mm mini jack socket, so it cannot be used to turn a speaker into an AirPlay speaker. This is a shame as everything else it does slightly better than the AirPort Express device.

The AirPort Extreme Base Station has faster data throughput and includes the new 802.11ac standard, and you can attach an external hard drive to it for wireless Network Attached Storage (NAS). It also has four gigabit ethernet ports so you can create a wired network with it that has fast data rates.

Can I replace my modem with an AirPort Extreme?

One of the quirks about Apple’s AirPort Base Stations is that they are routers, but not modems. As a quick refresher: a router enables you to create a network that connects various devices together (Macs, iPhones, iPads, hard drives, printers and so on); whereas a modem connects your network to the wider internet. What you generally think of as your router (the box supplied  by your ISP – Internet Service Provider) is probably a combined router and modem.

So while the AirPort Extreme enables you to hook all your items together, you’ll still need a modem to connect to the Internet. Typically most ISP supply you with a combination modem/router when you sign up. These combination devices are often referred to as “hubs” so you get the Virgin Media Hub or the BT Broadband Hub, and they create a wired and wireless network along with connecting to the Internet.

Apple’s AirPort Base Stations can augment (or replace) the router part of that device, but cannot replace the modem part. So you still need to keep your ISP hub. The idea is that you connect the AirPort device to your current modem and either turn off the router part of your hub, or have both routers working together (in effect having two wireless networks).

In office environments the situation is somewhat different, in that you may have a wired network in place but no wireless system. In this case attaching an AirPort Extreme router to the network enables you to set up a wireless network.

Apple’s base stations offer a selection of features you don’t get on your average wireless router or modem:

Setting up an AirPort Base Station with Apple AirPort Utility

It’s also worth noting that Apple provides apps to work with the AirPort devices. You can manage your networks with AirPort Utility for both Mac OS X and iOS. AirPort Utility is a far more friendly interface than any of the web-based interfaces we’ve seen provided with other routers.

So, is it worth buying an Apple AirPort Base Station?

It’s a good question and can only be truly answered by looking at how good the hub is supplied by your ISP. It’s worth noting that the AirPort Extreme and Time Capsule are both first class routers and almost certainly better than the one you have in your house.

As well as offering the latest 802.11ac standard, both the AirPort Extreme and Time Capsule have dual antennas inside so can produce both a 2.4GHz and 5Ghz wireless network (effectively you get two home networks from the one device). Newer devices can connect to the 5GHz network while older ones stick with the 2.4GHz network. Most hubs only operate in the slower 2.4GHz network.

These are great features to have alongside your current home network. In essence: an AirPort base station augments your current network with a layer of Apple services, and provides you with a much better wireless system.

But as for whether it’s worth buying one, now that Apple no longer makes them, probably not…