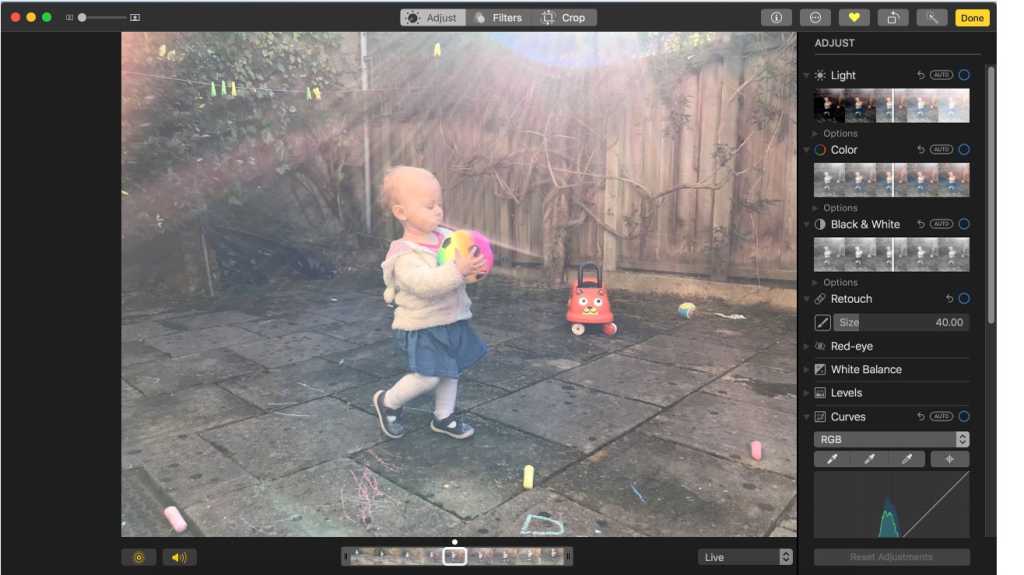 In this tutorial, we show how to make GIFs using Live Photos taken on your iPhone using the software that comes with your Mac. We will also explain how to create brilliant animated GIFs and from any video clips, using a variety of free Mac tools. For related advice, see our articles showing how to make a GIF on iPhone and how to send GIFs on an iPhone.

What is a GIF?

The GIF (Graphics Interchange Format) was invented just before the dawn of the web back in 1987. The GIF image format was supposed to be replaced by PNG (Portable Network Graphics), which came along in 1996, but even though PNG has better transparency and compression, there was one thing it can’t do: animation.

GIFs store multiple frames of animation which can be set to loop ad infinitum – no plugin or video player required. They’re easy to share and easy to make and these days you see them everywhere. Especially on Buzzfeed.

As a result everyone is looking to create GIFs and luckily, with the launch of macOS High Sierra, it got even easier to do so.

How to create GIFs on Mac

This tutorial will focus on four free tools for making GIFs. Firstly we’ll look at GIPHY Capture, a free piece of software that you can download from the Mac App Store and which allows you to select a portion of your Mac display, record it and convert it into a GIF.

Secondly, we’ll look at a way of converting Live Photos into GIFs.

We’ll also look at the Imgur Video to GIF tool, which converts sections of online video clips into GIFs with the absolute minimum of fuss – it’s wonderfully easy and convenient, and it’s the method we’d recommend for beginners.

Then afterwards we show you how to make animated GIFs (again for free) using the QuickTime Player application that is bundled with your Mac and the free version of PicGIF – PicGIF Lite, available on the Mac App Store and online service EzGIF. This is slightly more advanced, but lets you make GIFs from video files that you already have on your Mac.

GIPHY Capture (which used to be called GifGrabber) is a free piece of software available to download from the Mac App Store. The best part of GIPHY Capture is that it’s not exclusively for one service, such as YouTube – whatever you display on your Mac can be converted into a GIF extremely quickly and extremely easily. We’ll show you how we made a GIF with a video of the notorious dress morphing from blue and black to white and gold.

After downloading GIPHY Capture from the Mac App Store, we opened the software and a green square appeared onscreen. 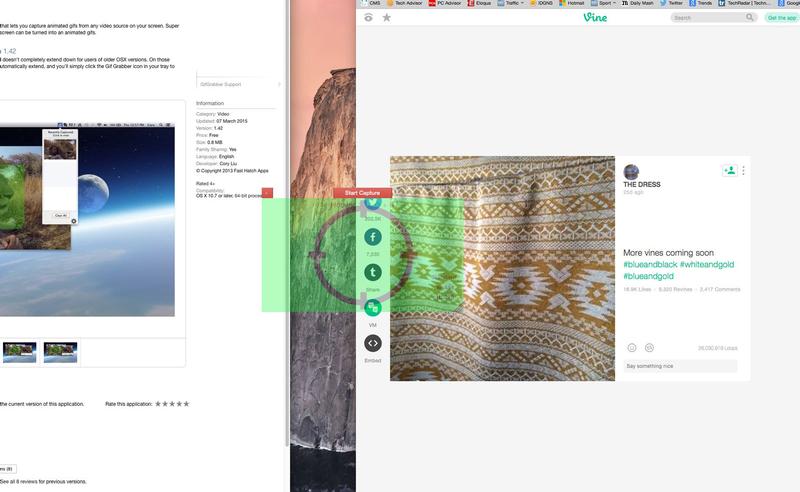 We could then load up the video that we wanted to create a GIF of – in this case a Vine – and rearrange the box to fit the video perfectly. Then all we had to do was click “Start Recording” to start creating the GIF. You have a maximum of 30 seconds to use, but try to use as little as possible: GIF files can get quite big. 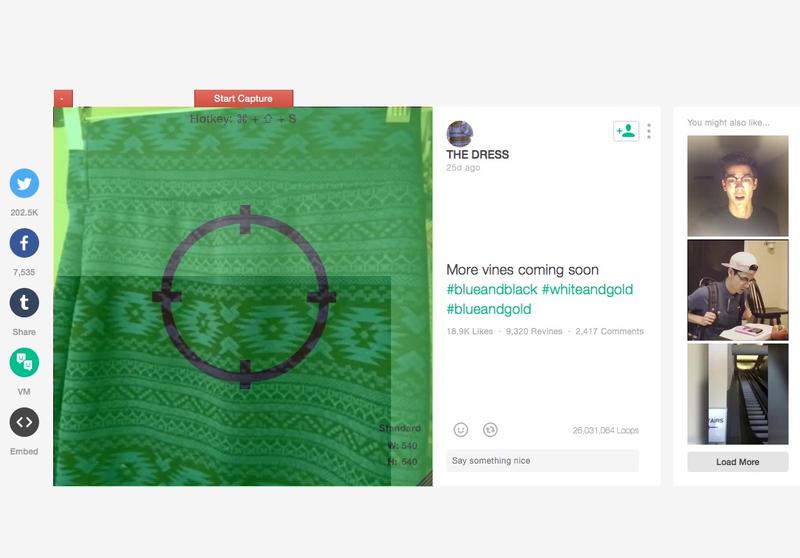 Once your GIF has been captured, click the GIPHY Capture logo in the Menu Bar and select your GIF. You can then resize your GIF to make the file smaller, trim it so it’s perfect and even generate a URL for it, ready to be shared. You can also export it normally.

The ‘Captions’ tab also lets you add text captions to your GIFs, with the option to set multiple captions to trigger at different times, with varied fonts, sizes, and colours. 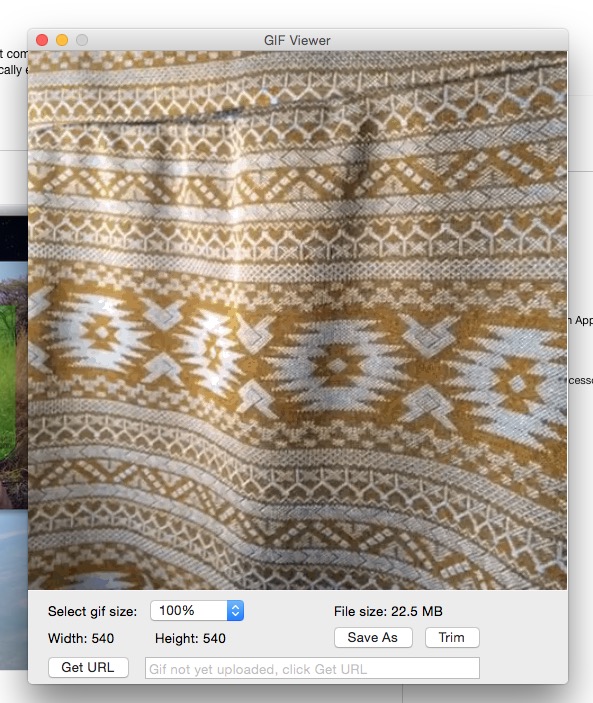 Once you’ve saved your GIF, you’ll be able to do as you please. It’s important to note that once you quit the app, all unsaved GIFs will be discarded so make sure everything you need is saved before closing! The end result, we’re sure you’ll agree, is pretty impressive:

Make a GIF out of a Live Photo

When Apple introduced the Live Photo setting on the iPhone, a lot of people wondered if they’d be able to create and share those moving images as GIFs.

As of macOS High Sierra, it is possible to do just that. But to create a GIF worthy of sharing you will want to follow our advice below.

You should keep the following in mind while taking the photo:

Once you have the Live Photo that you wish to turn into a GIF, you need to complete the process on a Mac. 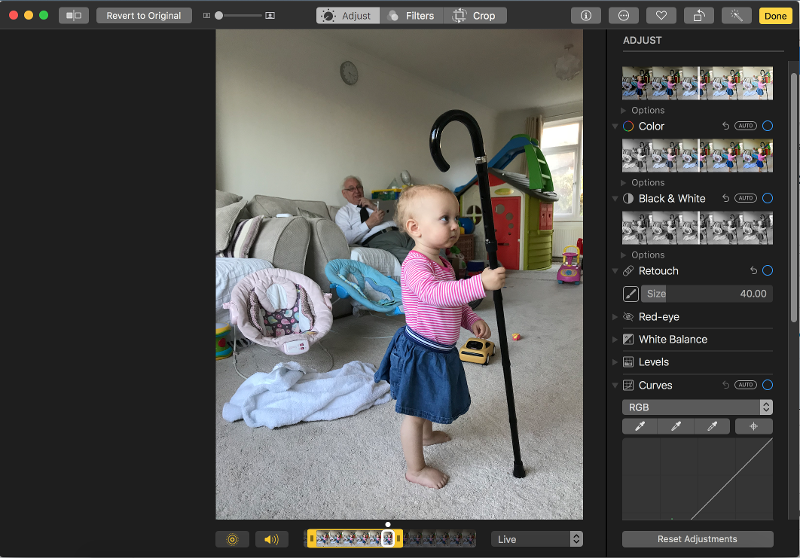 Follow these steps to turn your Live Photo into a Gif:

Imgur is a social image-sharing and -hosting site where users post, share, vote for and comment on all sorts of images – including GIFs. Earlier in 2015 Imgur launched a new service that makes it easy to turn online video into GIFs, and we think it’s fantastic.

It’s called Video to GIF. All you have to do is enter the URL of the video clip (it covers YouTube and Vimeo, most importantly, as well as a bunch of other sites), fiddle about a bit with the timings (it helpfully previews what your looped GIF will look like, based on the currently selected time period) and then hit the Create GIF button.

How about an example? We want to make a GIF of Tom Cruise sliding along the floor in Risky Business.

We found a clip of the dance scene on YouTube (it’s here, but don’t be surprised if it disappears for copyright-related reasons). After messing around a bit we found that the best bit is from 0:39 to 0:41 – but remember that you can do the timing experiments on Imgur’s tool as well as on YouTube. 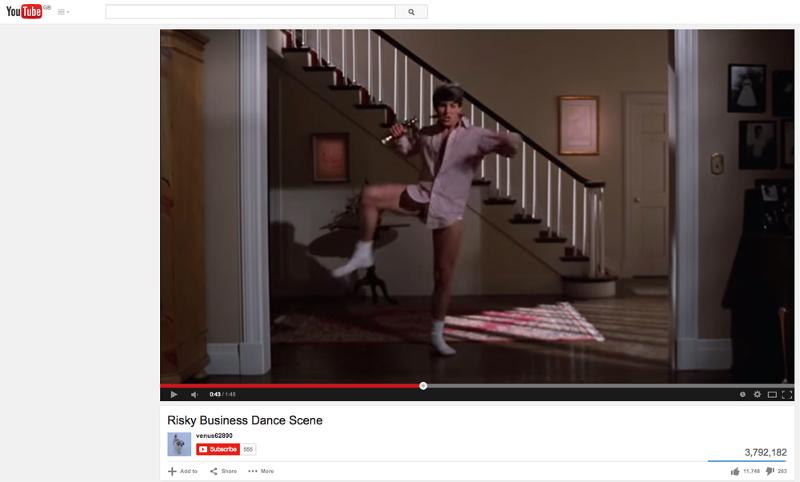 So we plug the URL into Video to GIF, and move the sliders so that a two-second section beginning at 0:39 is selected. There’s the option to add a text caption, which we’ve decided not to, and then you just press ‘Create GIF’. 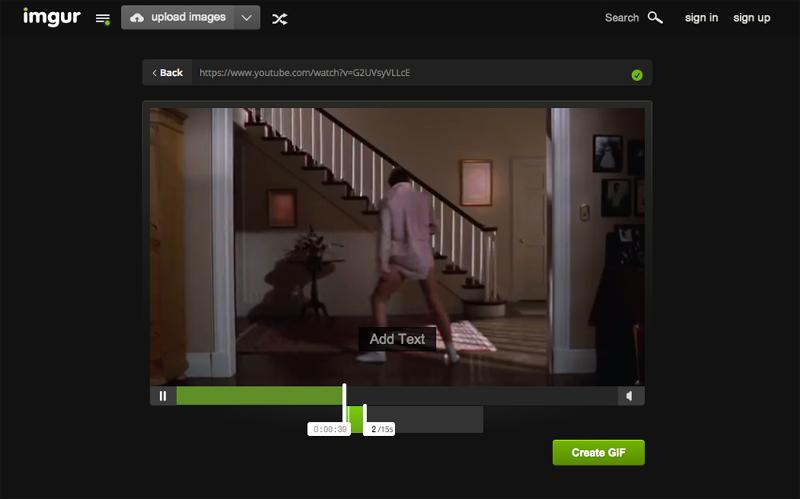 Processing takes a moment or two, but you’ll soon have an Imgur link to your GIF online. If you wish you can drag-and-drop the GIF off the web page and on to your desktop.

Here’s how it worked out, by the way:

Now we’re going to use some slightly more advanced tools. It’s debatable whether these more difficult methods are worth the effort, but they’re still pretty straightforward, and the benefit is that the video doesn’t need to be online for this method.

Firstly, you’ll need some video. It could be a clip shot with an iPhone, a YouTube clip grabbed using ClipConverter, or any other video file you have around. Open the clip in QuickTime Player. It’s the Mac’s default player so a double-click on the file should do it – but if it opens in another app you can CTRL-click on the file and choose ‘Open With’ instead.

Animated GIFs should be short and – preferably – loop in an aesthetically pleasing way. You can trim your video down to a few seconds easily; hit CMD and T, then adjust the start and end frames using the yellow trim handles. Click “Trim” when you’ve finished and save the new clip with a different name. 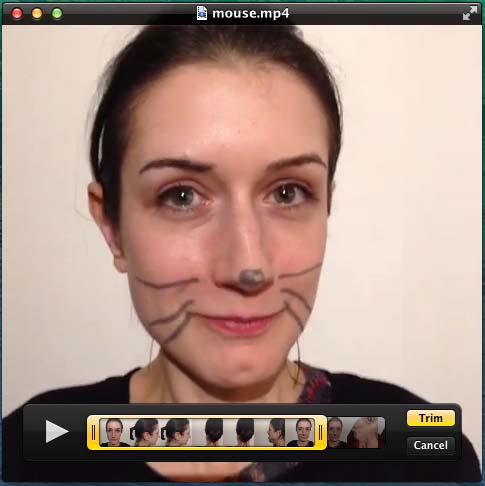 Download PicGIF Lite from the Mac App Store. You’ll see a very simple interface at launch – a screen that invites you add video. Open the file you trimmed in the last step and in a few moments your carefully trimmed clip will open in an editing screen. There’s a ‘Trim’ button, but it doesn’t work in the Lite version – so click ‘Load’ instead to import the frames in PicGIF’s timeline view. 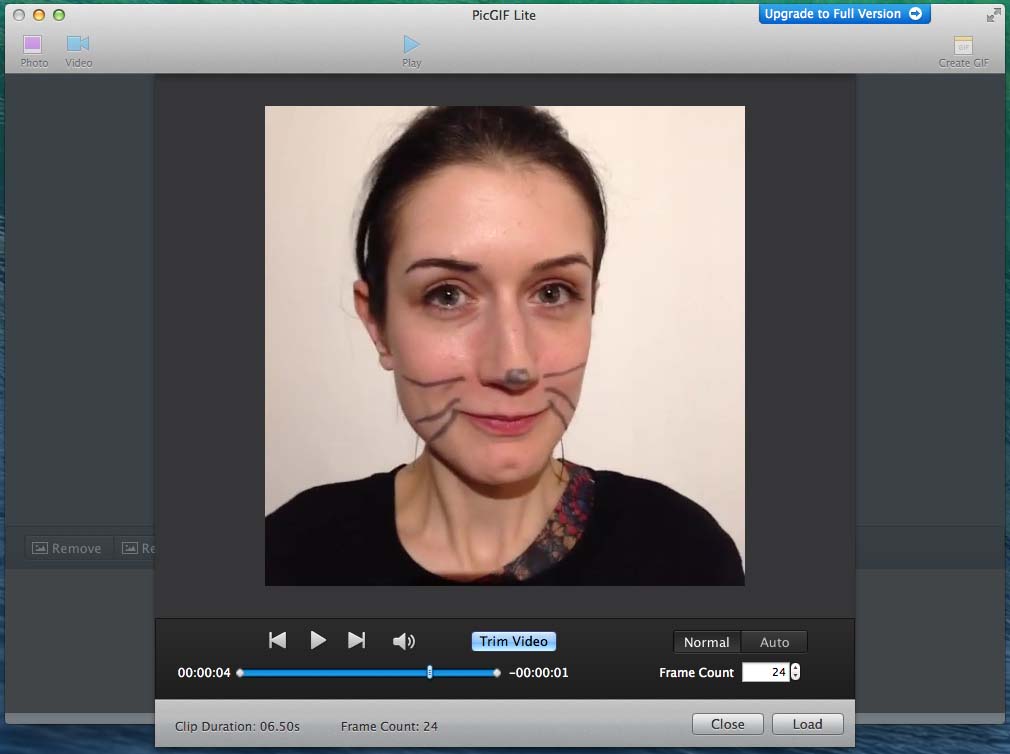 Although this a cut-down version, there’s some optimisation you can do within the program before you output your animation. After playing back the video you can delete frames at the beginning or end to improve looping. You can also set the file to ‘Auto-Optimise’ to reduce the overall file size.

One last thing to do before saving out as a GIF is to choose the correct aspect ration for your image. If the dimensions of the original aren’t listed you can choose ‘Custom’ and enter height and width manually. 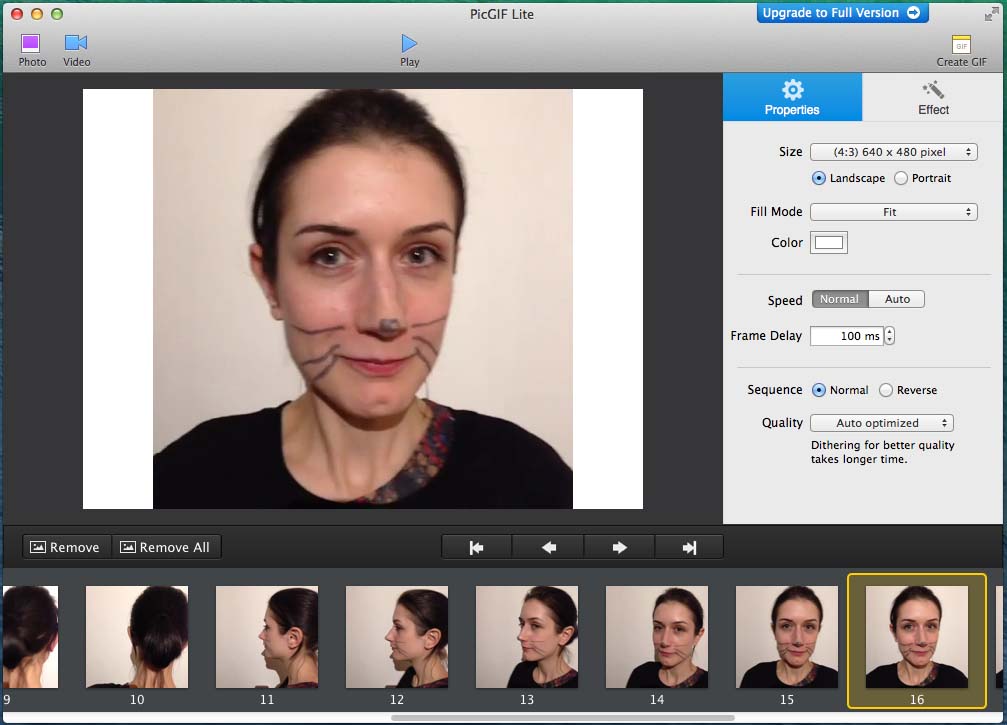 Although adding text isn’t supported in the Lite version of PicGIF, we can still add text after our GIF has been created. Go to online service EzGIF, click the link labelled ‘GIF Effects’ and choose ‘Add Text to GIF’. You’ll be prompted to upload the optimised animation you created before. The options in this tool enable you to add black or white text to an image using a selection of fonts. For the classic viral GIF effect, use ‘Impact’.

And that’s it – you’ve created an animated GIF from a video clip with text, all for free and on your Mac.