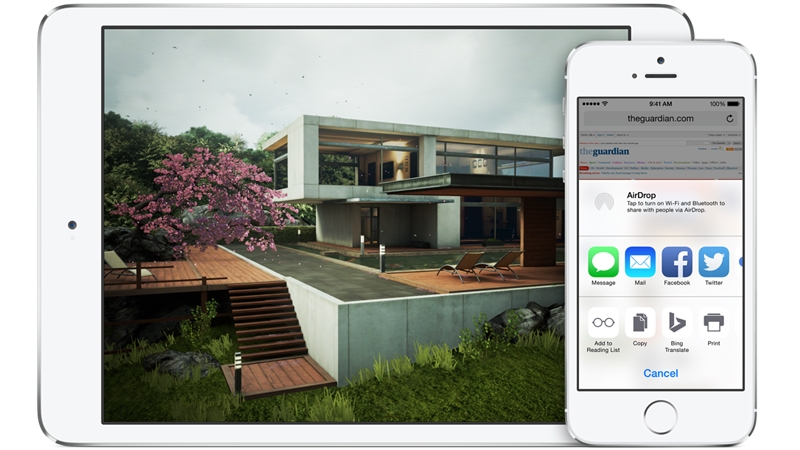 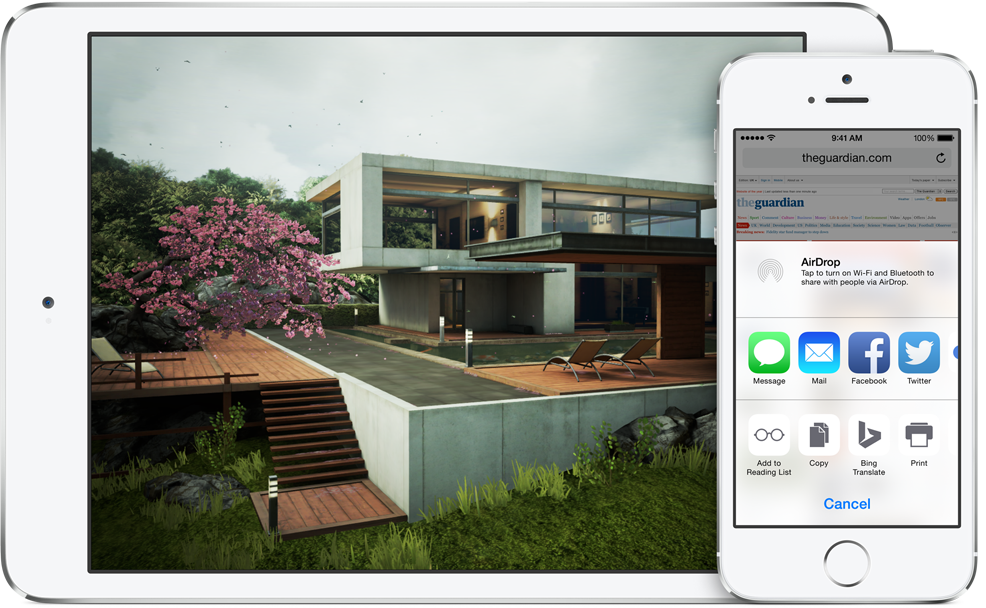 Apple on Monday at WWDC 2014 unveiled iOS 8, and with that, the company announced a slew of new features for Developers that are going to bring some huge changes to the apps on our iPhones and iPads.

“iOS 8 is the biggest release for developers since the introduction of the App Store,” says Apple on its website. “It opens up new areas of iOS, allowing developers to extend the reach of their app content and functionality. It includes over 4000 new APIs to enable amazing features and capabilities. And it offers bold new technologies for gane development. All of which means soon you’ll see exciting new apps and games that let you do things you’ve never been able to do before.”

Read: 5 ways to actually find what you are looking for on the App Store

First, Apple announced that it’s bringing new features to the App Store, including a new ‘Explore’ tab, which will help users find the apps they’re looking for. This is a widely wished-for new feature, so we’re looking forward to trying it out.

There’s also going to be a new ‘Top Trending’ search feature in the App Store, as well as new Related Searches and Editors’ Choice logos so we can expect the process of searching for apps to become a lot less frustrating.

Developers will be able to form app bundles, too, so users can buy multiple apps at a discounted price with one tap. Plus, they’ll be able to create short videos for ‘App Previews’ in the iOS App Store.

A new service shown off by Apple during WWDC 2014 is TestFlight, which means developers can invite users to beta test their apps.

Apple says that there will be more features coming the App Store that we’ll find out about this week during the rest of Apple’s WWDC 2014 conference, so we’ll update this article when we find out more details about these changes and improvements. 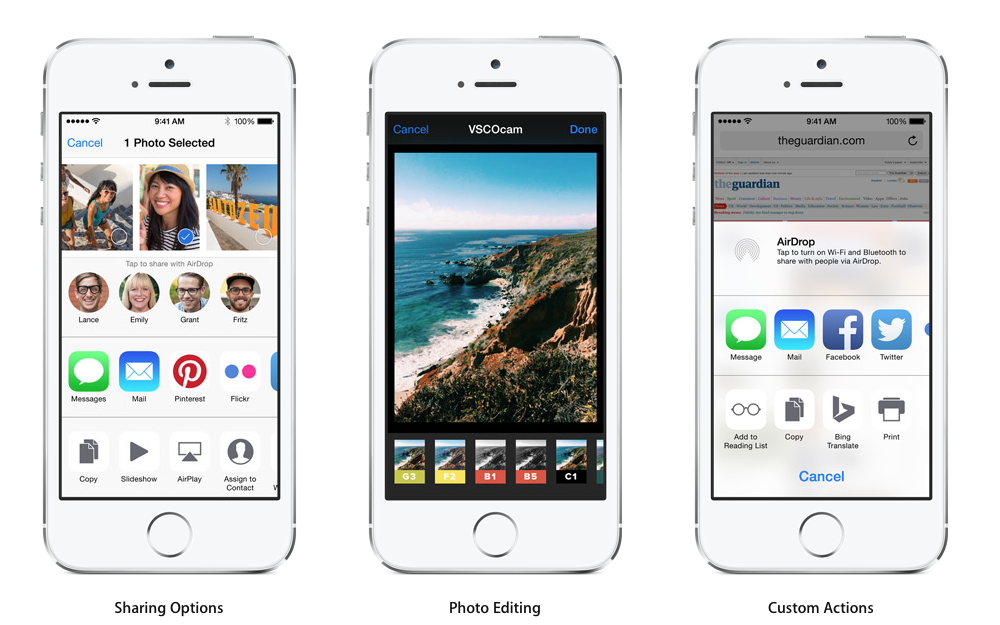 Apple also made some really important changes to the SDK (Software Development Kit) for iOS. The first thing is ‘Extensibility,’ which means that apps will be able to communicate with each other properly for the first time, even third-party apps. So apps from the App Store will be able to extend the system and offer services to other apps.

With this new Extensibility feature, Apple has opened up the sharing options to all developers, so if you use a social network that’s less popular than the big names, you might find you can soon quickly and easily share to that network straight from Apple’s apps and the rest of iOS. Developers will also be able to embed their filters and editing tools directly into Apple’s Photos app, so third-party effects will be able to be applied to your Photos without leaving Apple’s app.

There will be new ‘Custom Actions’ that will allow developers to extend the capabilities of apps, and the way iOS handles documents is changing so you’ll be able to open and edit documents in a wider variety of apps and share documents between apps without creating copies.

Developers will be able to create widgets for their apps that will work in Notification Centre, too.

Apple demonstrated a small portion of the Extensibility feature by opening up Safari, and showing how you could use a Bing Translate extension to automatically translate the web page inline, without leaving the app.

Apple is also allowing system-wide third-party keyboards for the first time. This means, if you have a special keyboard you want to use, you can install it on iOS. 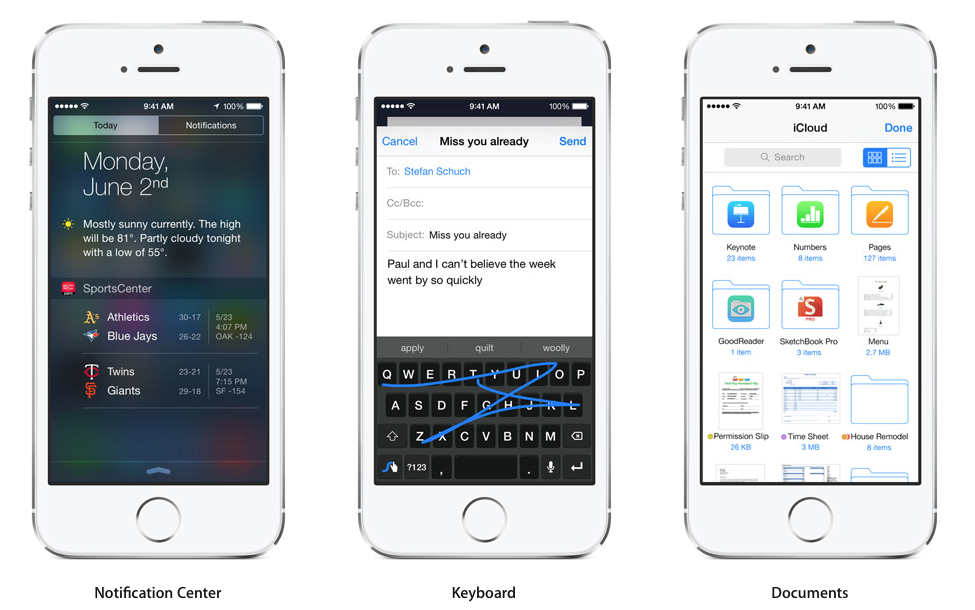 “From the moment we introduced the Touch ID, developers were excited by the potential,” said Apple’s Craig Federeghi during the announcement. So, third-party apps will be able to take advantage of the TouchID too. You’ll be able to sign in to third-party apps using the Touch ID, which works by unlocking keychain matches. It’s very secure, though, says Apple, adding that the fingerprint information is never exposed.

As rumoured, Apple used WWDC 2014 to unveil a new smart home platform to iOS. Apple highlighted that there are lots of great home automation devices with companion apps for things like lights, door locks, webcams, garage doors, thermostats and more.

You’ll be able to group devices into scenes and then use Siri to activate them. For example, saying “Get ready for bed,” to Siri will lock your doors, dim your lights and turn your thermostat, perhaps.

Other new tools for developers announced at WWDC 2014 include CloudKit, which lets developers use iCloud in their apps, Metal for 3D graphics, SceneKit for casual gaming design, a new ‘Swift’ language to replace Objective-C, HealthKit for health and fitness app developers to share their data with the new Health app, a new PhotoKit tool and the open Camera API. We’ll update this article with more information about each of these features soon.

For more on WWDC 2014’s announcements, check out the links below: