If you’ve got an iPad or iPhone and want to connect it to a TV, you’ve come to the right place. This article has everything you need to know about hooking up your mobile device to a television, then mirroring or streaming whatever’s on the iPhone or iPad to the big screen.

This procedure turns out to be very easy; it’s also very useful. Even though Apple devices have amazing displays (especially the ultra-large 12.9in iPad Pro), it’s nearly always more enjoyable to play video and photos on the living room’s big screen rather than huddle round a smartphone or tablet. And now that Apple’s Apple TV+ streaming service is (almost) here you’ll be able to watch the new shows, like See and The Morning Show, on your television.

There is more than one way to hook up your iPad or iPhone to your TV. You could use a cable, an Apple TV, a Roku, Amazon Fire stick, and some TVs offer AirPlay support. You can read about exactly what TVs and other devices work with Apple TV+ here.

On a related note, we’ve got a separate tutorial explaining how to connect a MacBook to a TV.

Use a Lightning Digital AV Adapter 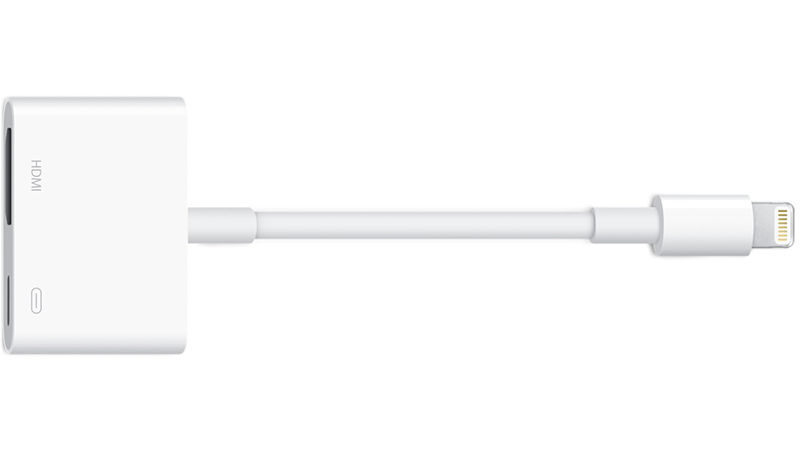 This little box of tricks contains an HDMI port to plug into the TV, a Lightning connector (output) for plugging into your iPad or iPhone, and a bonus Lightning port (input) which gives you the option of charging your iPhone (or iPad) at the same time.

Turn on the TV and ensure it’s set to display the video input from the HDMI socket. (You generally use the remote to pick from multiple HDMI inputs on your television – check your TV’s instructions for specific advice.) You will see the iPad or iPhone’s home screen appear on the television.

It may appear with lower quality and in a box shape. Don’t worry: this is just for the Home screen. Things will improve in a minute.

Start playing a video on your iPad or iPhone. Either pick a movie file from the Videos app, or play a clip from Apple TV+, Netflix, BBC iPlayer, YouTube, or any other video app. The Home screen will vanish from the TV, and the video will play in full definition. On the iPhone you will see a screen that says TV Connected. 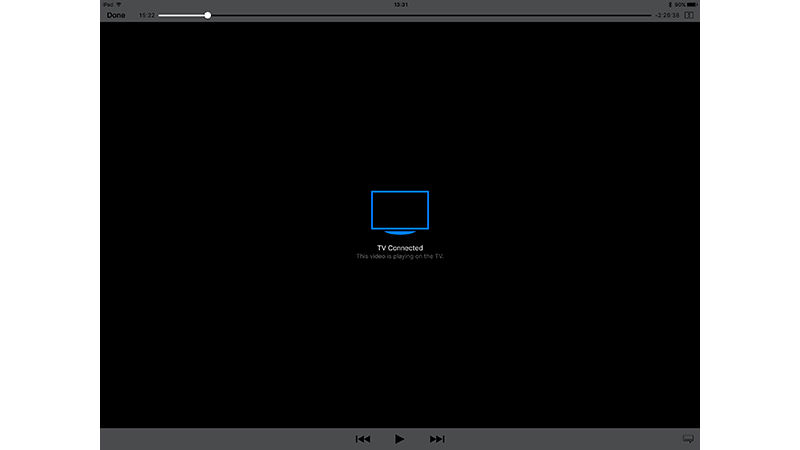 You can now use Control Centre to enable specific content from your iPhone to be sent to your TV, just as with the AirPlay TV option below.

Use an Apple TV

You also need to make sure your iPhone or iPad is connected to the same Wi-Fi network as your Apple TV.

Some apps, such as BBC iPlayer and TED Videos, feature their own AirPlay icon. While playing a video, tap the AirPlay icon and choose Apple TV to start streaming your video.

Sometimes you can’t stream video from an app, or the web, on the television. Support for AirPlay is determined by developers, and not all support it. (You cannot stream ITV Hub from your iPhone to the Apple TV, for example.)

In this instance, you can work around the problem using mirroring (although that still won’t work with ITV Hub – but since ITV Hub is available via the TV app that shouldn’t be an issue). With mirroring selected you can stream the whole of your iPad screen, including the Home screen and whatever is appearing in apps, on the television. Simply activate Control Centre and select the AirPlay option to bring up the AirPlay menu, and select Apple TV.

Roku and Amazon have both started to offer access the Apple TV app on their streaming devices.

If you have a supported Roku device (complete list of supported device here) you can add the Apple TV channel. To do so press Home, scroll to Streaming Channels and open the Channel Store. Select Search Channels, and type in Apple TV. With Apple TV highlighted press Ok on your remote and select Add Channel.

Now that the Apple TV channel is installed you can access Apple’s iTunes store to rent or buy movies and you can watch the Apple TV+ shows if you subscribe to the service.

Use an Amazon Fire TV

Watching Apple’s content on the Amazon Fire TV is a similar process to the Roku.

If you have a Fire TV Stick (2nd Gen) or a Fire TV Stick 4K you’ll be able to access the Apple TV app for access to iTunes rentals and movie purchases, and all the streaming content Apple is making available to subscribers.

You’ll also have access to your iTunes library, so any movies and shows you have already purchased will be there.

To get the Apple TV app on the Amazon Fire, click the search icon, then search for Apple TV. Once the app is installed you’ll be able to start using it.

Use a Samsung TV

Some new Samsung TVs have the Apple TV app.

Once you are signed in you can view your Library of content you own and you can search for content, or scroll through the options to find something you want to watch.

Viewing video or photos on the TV

It’s not only films and TV shows you’ll want to watch. You can also stream your photos and videos from your iPhone to your TV screen.

To view your iPhone’s photos and videos on your TV follow these steps:

The slideshow will start playing. If the slideshow is playing on your iPhone or iPad rather than your TV, tap on the AirPlay icon in the top right and choose your Apple TV. 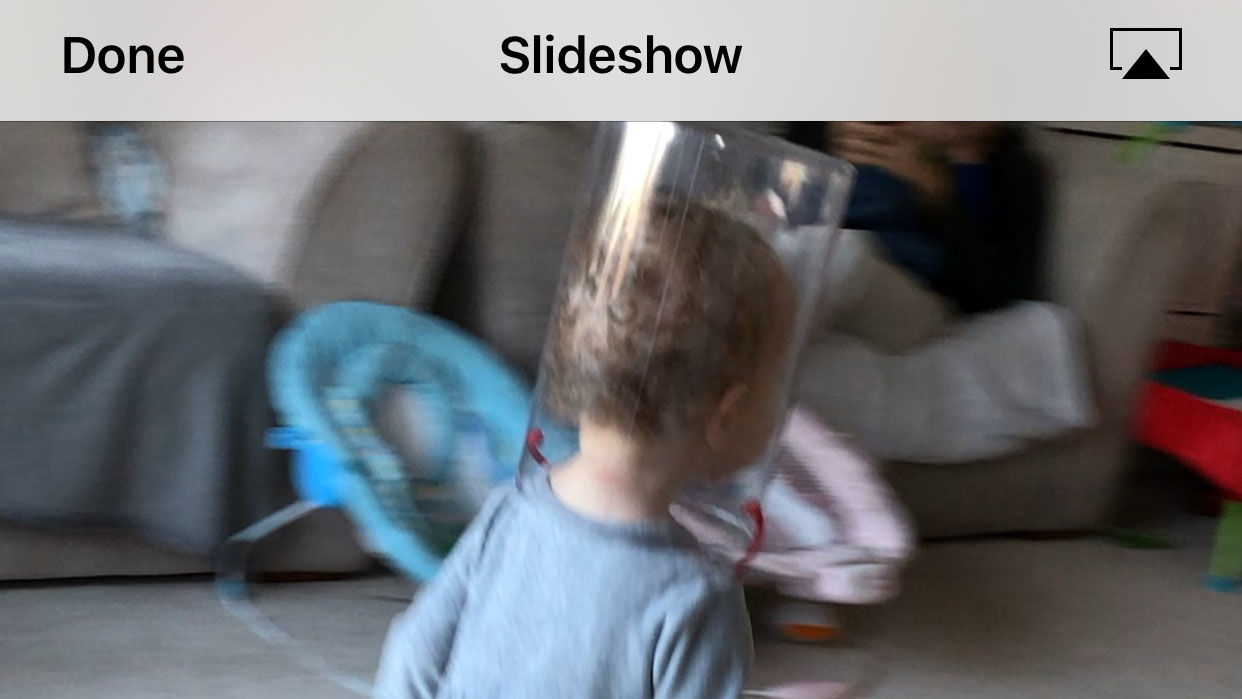 If you’d like some music to accompany your slideshow, tap Options and choose from the dropdown menu beside Music or choose music from your iTunes library.

Playing music on your TV

To play music stored on your iPhone through your TV, choose the track, album or playlist you want to listen to, access Control Centre again, select AirPlay and then select Apple TV. Bingo! Your favourite tunes are now playing through your TV.

If you own an older iPhone or iPad with a 30-pin connector (if it’s an iPhone 4s or older, or one of the first three generations of iPad, it’ll have a 30-pin connector; the iPhone 5 and later, the iPad 4 and later, all of the iPad Air and iPad mini models and the iPad Pros have Lightning instead), then the old Apple Composite AV Cable is a good option – if you can find one.

This cable works in a similar way to the Lightning Digital AV Adapter above, except that you’ll need to use the composite video input on your TV instead of HDMI, and make sure any videos you want to watch are SD rather than HD.

But Apple no longer sells it directly, so you’ll need to find a second-hand unit: try eBay and Amazon. Alternatively, try this Belkin adapter. 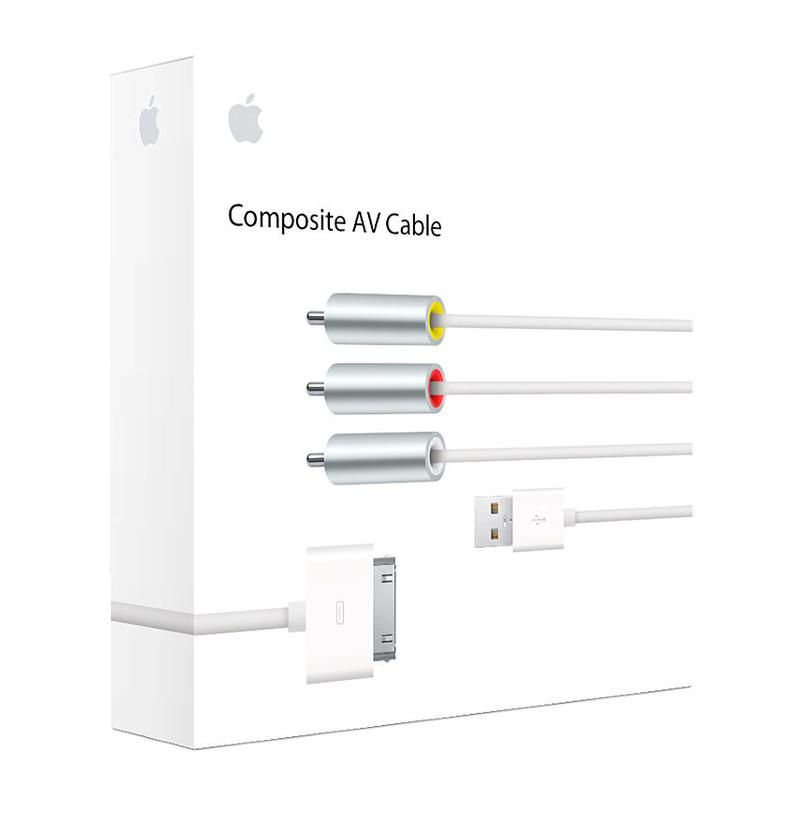