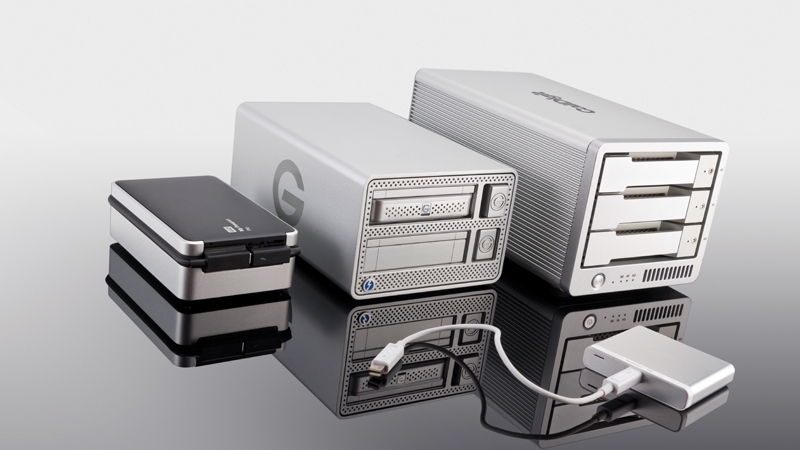 We can whizz data around inside our Macs at phenomenal speeds now. Thanks to solid-state flash storage and the latest PCIe-connected data buses in the most recent Apple Macs, we’re now starting to catch up with advances in processor technology.

Getting the data in and out of the computer though – that’s another challenge, and a task that Steve Jobs was said to be keen to both accelerate and simplify, leading to the development of technology that is now known as Thunderbolt.

Apple may have inspired Intel to develop Thunderbolt, but neither company has done a great deal with the technology since. Besides the fitting of these promising high-speed data ports to practically every Macintosh (and one desktop monitor) over the last three years, Apple has relied upon other companies to make useful things to plug into them.

Most of Thunderbolt devices currently on the market are storage drives, and available in all manner of shapes and sizes – both physical size and in data capacity. We rounded up eight of the most interesting and potentially invaluable models to gauge the current state of the Thunderbolt art. That’s four mobile drives that can power from a MacBook port, and four desktop-sized units that need external mains power.

One thing Intel has revised since its first launch is the maximum single-device throughput, perhaps rising to the distant challenge from the USB camp that is promising faster speeds from USB 3.0. The revision is simple called Thunderbolt 2.

Read our round up of the best storage devices available now: Best storage options for Mac

Thunderbolt 2 is a modest evolution of the original Thunderbolt spec. Where the initial version allowed two separate channels with nominal 10 Gb/s speed – but full duplex, meaning data can flow at that speed in both directions simultaneously – the new Thunderbolt 2 has only one duplex channel, but with twice the nominal bandwidth, now standing at 20 Gb/s.

So the overall speed hasn’t changed, just the way the channels are configured: now we have something akin to line bonding, putting two slower channels together to create one faster channel.

Thunderbolt 1 could allow data to transfer in one direction at a maximum theoretical speed of 1250 MB/s. And in real use, we have seen speeds up to 869 MB/s; in fact, that was the best-case sequential read speed from the original Promise Pegasus R6, the first ever Thunderbolt device launched after Apple’s MacBooks of February 2011.

Thunderbolt 2 should allow twice this speed – 2500 MB/s at the physical layer anyway, with actual user data throughput somewhere below this. In the following pages we have two storage devices that incorporate Thunderbolt 2; and both make use of the wider pipe to allow transfer speeds previously unavailable to the Mk 1 conduit.

Thunderbolt devices of either generation can happily co-exist on the same cable, although the new TB 2 device will be restricted to TB 1-like 10 Gb/s speeds.

With drives varying in size from a few centimetres across and weighing just a few grams, the heavy multi-disk spinning RAID arrays that will deliver vast pools of data at high speed, there’s certainly plenty of diversity in the Thunderbolt pool. Be aware though, that best performance can only be found from mains-powered storage drives, as bus-powered drives are currently starved of enough power to allow speed enough to satsify even SATA-based SSDs.

The CalDigit T3 is a well-built desktop Thunderbolt drive.

The Freecom Mobile Drive mg has a slim and lightweight design.

The G-DOCK ev with Thunderbolt is aimed at pro users and works well.

LaCie’s Little Big Disk Thunderbolt 2 is the fastest storage drive of any persuasion.

The Silicon Power T11 120 GB is lightweight and compact with good performance.

From the mobile camp, we still find restricted top speeds – the same situation as when the first bus-powered drive launched from Elgato two years ago. That’s a shame, as even SATA-restricted SSDs can reach 560 MB/s but Thunderbolt is holding them back to 380 MB/s. In other words we have to wait 50 percent longer for our files to copy than is necessary.

From our group of four mobile Thunderbolt drives, the Elgato Thunderbolt Drive+ is still the pick for performance but it’s priced well out of reach for many users at over £700 for a 512 GB model. And since it performs conspicuously better as a USB 3.0 drive anyway, it’s tempting to pass until Intel can make the silicon required to power high-performance Thunderbolt SSDs correctly. The Freecom Mobile Drive mg is a handy compromise, using a cheaper disk while still offering a choice of connections. And if you need it more micro-sized and even ligher in weight, look out for the tiny but expensive Silicon Power T11.

Desktop drives suffer no such restriction in their performance, and we see a range of core storage options available – 3.5in desktop-size hard disks, 2.5in notebook drives and of course solid-state devices.

Both G-Technology and Western Digital have models based on smaller 2.5in disks; the former in order to create a versatile RAID-meets-portable solution, while the latter puts two spinning eggs in a solid metal basket. This combines the disks into a RAID to optimise performance, even if the final unit is somewhat chunky in portable drive terms, and irritatingly whiny as soon as it gets warm thanks to ill-conceived and undersized fan.

Shuffling big disks is essential if you want peak performance from the classic technology. CalDigit units three disks with a first-generation Thunderbolt interface to create a handy desktop-ready RAID box that is both house-trained and speedy. But when Promise Technology put its six disks together with its own hardware RAID controller, it managed to bust the original Thunderbolt ceiling. Thankfully, equipped as it is with Thunderbolt 2, it can allow blistering gigabytes-per-second transfer speeds from the old spinning rust setup.

Top prize for combining the best new flash tech with the Thunderbolt 2 interface to make use of it, LaCie has triumphed with its revised Little Big Disk Thunderbolt 2. It’s far from cheap at £1000 for its 1000 GB capacity, but thanks to PCIe-based storage thoughtfully RAIDed together it can sustain blistering speeds for those who need and can afford it. And crucially, LaCie made its fast drive tolerable to be around after a clever rethink on its internal cooling system which makes it suitable quiet.