Welcome to our complete guide to Siri on the Mac, in which we cover everything you need to know about the voice control assistant introduced with macOS Sierra in 2016 and enhanced in High Sierra. We explain everything from setting up Siri in the first place to the wide range of commands it can respond to.

We look at how to use Siri, plus how to get the very best from it – and include a few tricks you might not know about, including how to trigger Siri with the “Hey Siri” command, and how to use Siri to make everyday tasks on your Mac easier.

How to set up Siri on Mac

When installing macOS, or setting up a new Mac, you will be asked if you wish to Enable Siri.

Highlight the tickbox marked “Enable Siri on this Mac” and click Continue. 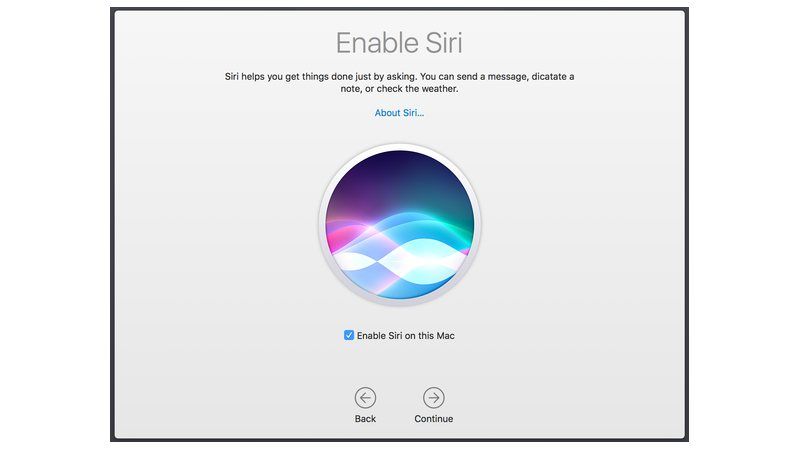 If you missed this step when setting up your Mac, follow these steps to set up Siri on your Mac:

Read next: Siri troubleshooting, plus here’s how to use Siri on the iPhone.

How to activate Siri on a Mac

There are no fewer than five ways to start Siri on a Mac, and here they are:

How to create a keyboard shortcut for Siri

The default keyboard shortcut options for triggering Hey Siri are Command + Space or Option + Space. You can switch between the two in System Preferences. You can also set your own custom keyboard combo, here’s how

Now, when you wish to trigger Siri you can just use this key combination.

How to use Hey Siri on your Mac

If you want to trigger Hey Siri on your Mac in the same way as you do on your iPhone you can do so, but it’s not a default option. You need to use dictation options in Accessibility system preferences to activate the Siri on your Mac with your voice, rather than the standard keyboard shortcut or clicking the Siri icon in the menu.

Now when you say “Hey Siri” the Siri Window should open. Of course, this will also trigger Hey Siri on your iPhone, so you could change the command on your Mac to something different, like “Hello Siri”.

How to type to Siri

One thing that frustrates us about using Siri on the Mac is the fact that you use the function by speaking out loud to it, which can be a bit embarrassing in an office full of people.

While it’s likely to be some time before Siri can read your thoughts, there is in High Sierra a way to use Accessibility settings to enable you to type into Siri.

Now when you trigger Siri, a keyboard will appear into which you can type your query.

How to change Siri’s search engine to Google

Siri searches with Bing. You may prefer to use a different search engine if you feel you would get better results.

It’s impossible to change the default browser, but you can force Siri to search Google, here’s how:

How to change Siri’s voice

You can change the voice of Siri if you wish. There are male and female voices, as well as a choice of accents. Our favourite is the Irish (Female) voice, which sounds curiously downbeat – as if Siri’s answering your queries after a long day at work. 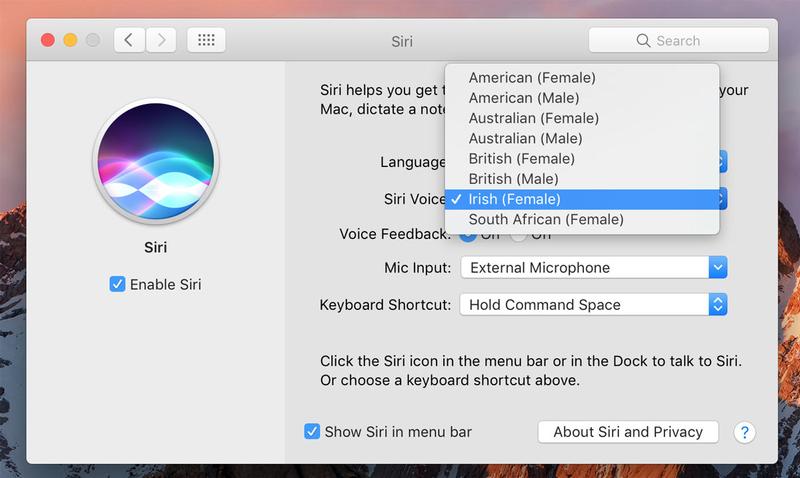 Note that if you want Siri’s responses to remain relevant to your location, then don’t change the Language setting. If you change the language to English (United States) rather than English (United Kingdom) you won’t get the same results if, for example, you ask what the date is on a public holiday in the UK. In our example, asking “What is the date on Sunday” saw the UK Siri include the fact it is Guy Fawkes Night in the response.

Siri sometimes has trouble with broader British accents, as we discovered in our highly scientific test a few years back – although we’re happy to acknowledge that things have improved since then…

How to set a reminder using Siri on the Mac

Because macOS has no clock app you won’t be able to ask Siri on Mac to set a timer or alarm. However, Siri can create an entry in the Reminder app with an alert set for that time.

There are some practical ways in which you can use Siri to remind you of things. For example, if you were reading an email or a webpage and wanted to go back to it later, you could Ask Siri to remind you. Here’s how: 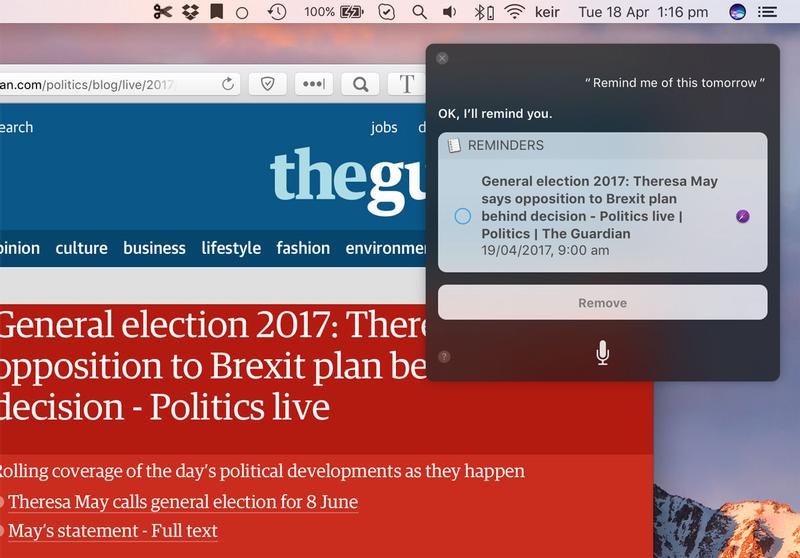 You can also request Siri reminds you about:

Rather strangely, Siri can’t remind you about other apps. You can’t get Siri to remind you about a song or movie in iTunes, for example, or an image within Photos, or an entry within the Notes app.

How to use Siri to add an event to the Calendar

You can also create an Event for a date. Tell Siri the following:

Thing to ask Siri on the Mac

If you’ve used Siri on the iPhone or iPad then you’ll already have a good glossary of queries, and most will work just fine with Siri on the Mac. However, here’s some specific queries that you can try that illustrate Siri on the Mac’s usefulness. Of course, you can adapt them to your own needs. 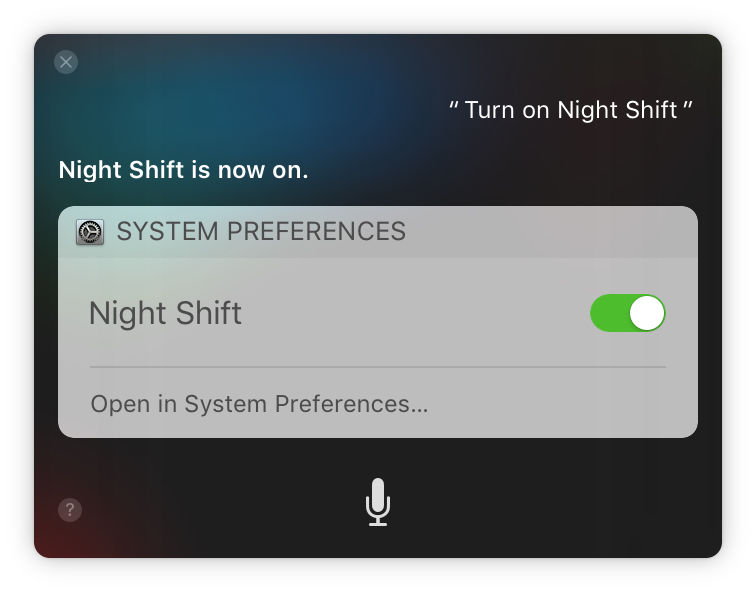 Other things you can do with Siri on the Mac

How to get Quick Look previews in Siri

Quick Look is the macOS feature that lets you quickly preview items like files by selecting them and then hitting the Space key.

Quick Look works in Siri for Mac’s results window too: just single-click any item in the list of results and then hit Space to Quick Look.

It works with files that Siri locates on your hard disk, avoiding the need to click each individually to open them in Safari.

Unfortunately, when we tried to use it to Preview pictures found online it didn’t work, which seems to be an issue related to Bing.com.

How to pin Siri results

Unfortunately, it’s only possible to pin results in the Notification Center, and nowhere else. 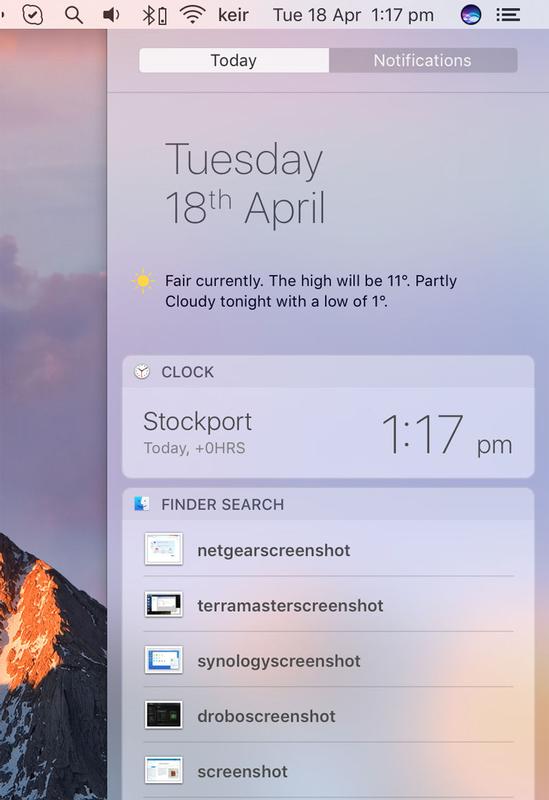 How to create a screengrab of Siri results

If you grab and drag the top bar of any search results box within Siri, you turn it instantly into a PNG image file and can drop it onto a Finder window, or even drop it straight into something like a word processor. 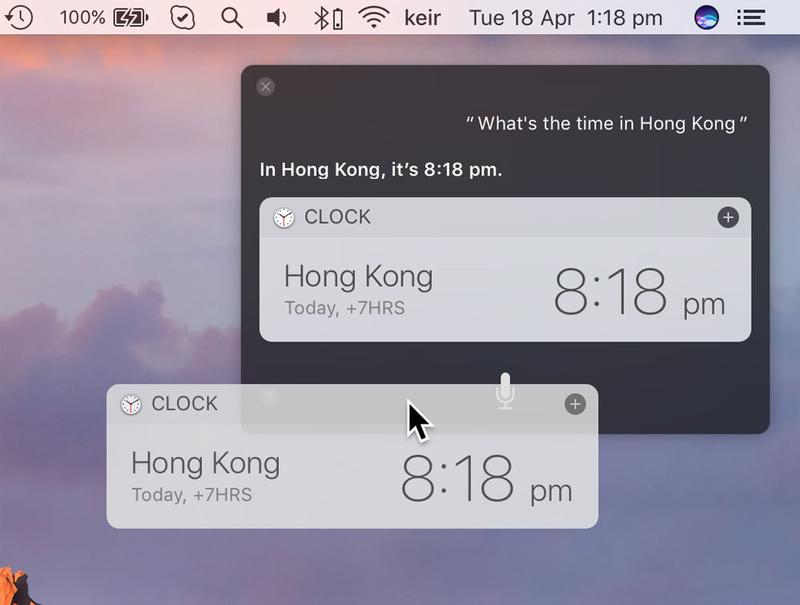 Dragging items out of Siri’s results

If you use Siri on your Mac to search for files – “Show me files I created yesterday”, for example – then you can drag them out to instantly create an alias to the file (basically a shortcut to that file). If you hold down the Alt key (Option on some keyboards) while dragging files located on your hard disk then you’ll instantly create a copy of the file.

One thing you can’t do, unfortunately, is move a file – although holding down Cmd should allow you to do so, in-line with the usual Finder shortcuts, doing so when dragging a file from Siri’s results window shows a prohibited symbol.

If you’re using Siri on the Mac to search the web for things like pictures, or to find out information, then you can again drag out the individual results to a Finder window or the desktop to create a copy on your computer. Web searches result in a Webloc file being created which, when double-clicked or Quick Looked, will open that web page for viewing.

Note that holding down Cmd when selecting files in Siri’s results window will let you multiple select items, as in any Finder window. 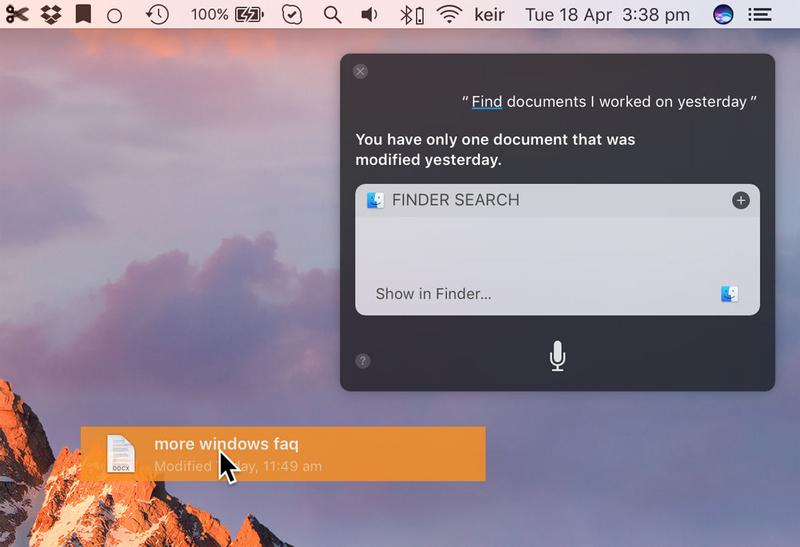