Want to know how to shoot brilliant time-lapse video on an iPhone? You’ve come to the right place. In this article we show you the basics of time-lapse photography, demonstrate how it all works and offer a few tips to help improve your videos.

What is time-lapse photography?

Time-lapse is a video recording mode that captures video at a very low frame rate: around one to two frames per second, although this depends on the length of the recording.

When played back, time-lapse video is almost the opposite of slow motion. Slo-mo shoots more frames per second than normal shooting, so that when it’s played back at a normal framerate it spreads out over a longer period and everything happens more slowly; when time-lapse is played at 30fps you rattle through minutes, or even hours, in just 30 seconds or so.

It’s a great technique for shooting largely static environments that change slowly – the sun moving across the sky, flowers opening and closing – or for creating artistic, music-video style recordings in crowded areas.

How to turn on time-lapse mode

Open the Camera app as normal – either tap its icon or swipe in from the righthand edge of the lock screen. By default you will be dropped into photo mode (you can see this labelled in yellow, just above the shutter button) but if you swipe across the mode carousel you can change to video, Portrait Mode and so on. Time-lapse is on the far left of the carousel, so keep swiping from left to right until you get to it. 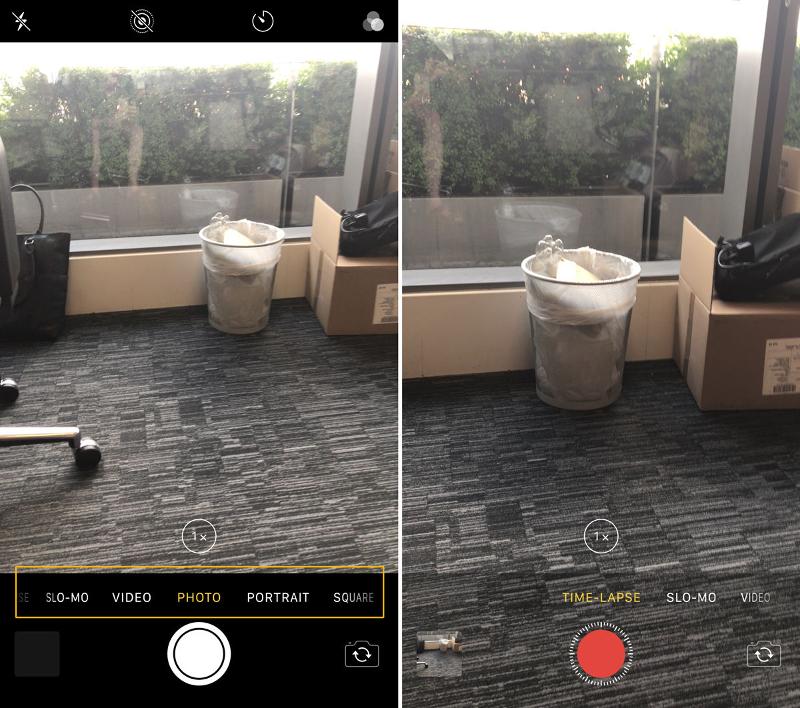 Once you’re in time-lapse mode you’ll notice that the red record button is encircled by a timer. Tap that to begin recording and you will see the timer counter move around the record button. Tap the recording button again to stop recording.

Why is the video so short?

You will find that most time-lapse video recordings play back in 20 to 40 seconds, regardless of how long you recorded for.

This is actually a useful feature, as it means that you won’t fill up your iPhone storage during the recording. But it is also why the video you recorded for ages isn’t much longer than one you recorded in just a few minutes.

According to Apple’s website, the number of frames captured per second is relative to the time you are recording for. The longer you record for, the fewer frames will be captured each second – and the more dramatic the ‘speeding up’ effect when it’s played back at 30fps.

If you record for less than 10 minutes the phone will capture 2 frames per second. (So when you play it back at 30fps, it’s been speeded up 15 times.) If you get past the 10 minute mark, your iPhone will retrospectively discard half of the frames captured thus far, and from then on record only 1fps. (So the speeding up effect will now be 30 times.)

The framerate drops again at 40 minutes, one hour and 20 minutes, and so on. This post explains the process in impressive detail.

While the video will be vastly smaller in size than a normal-speed video of the same scene would have been, don’t expect a really small file size. Our smallest clip is only a second long and takes up 4.2MB. Our biggest is 75MB and lasts 31 seconds.

Apple says you can record for as long as 30 hours. We didn’t try that, but we are pretty confident that the resulting video would not be significantly longer than a video took 20 minutes to shoot.

Tips for shooting time-lapse videos on an iPhone

Here are a few simple tips that will help you capture good-quality, effective-looking time-lapse videos.

When you’re recording, keep the iPhone really still for the best results. We recommend that you rest the phone somewhere or use a tripod, rather than hold it in your hand.

This is partly to avoid wobble, which will spoil the recording, but also because if you are attempting to hold the phone still for a good few minutes you hand is going to end up hurting!

The best recordings capture the contrast between moving and still objects. Keep the phone still and record traffic speeding past, or place the phone on a table and record people busily going about their business.

The key is to record in a location where you can contrast still objects with moving objects. In this example we recorded people moving around in the Accademia in Florence (that’s Michelangelo’s David in the background).

Alternatively, you could record movement. We popped the iPhone in a car mount and recorded for a good few minutes while driving a car through the Tuscan countryside.

The same concept doesn’t work quite as well when we recorded a time-lapse while walking around, because it wasn’t steady – the phone itself was wobbling around.

We also found that if you do scan around with the phone you want to do so as slowly as possible; remember that the smallest and slowest movements will be sped up when you play them back. The best advice is that if you’re moving the iPhone around when you are recording, do so very slowly.

4. Capture something that changes slowly

The best time-lapse recordings are of things that don’t change quickly. The benefit of the time-lapse format here is that what could be a pretty boring 30-minute video of the sun setting can be condensed into a 30-second clip. Equally you could record a flower opening or a candle burning – anything that changes gradually.

Time-lapse essentially allows you to record something where the changes would be too subtle to notice if you watched in real time.

5. Ask your subject to move slowly

If you want to capture a person moving you will get the best results if they move slowly.

As you can see in this video, if your subject does anything quickly the movement may only be captured in one or two frames of action. However, you can get some funny Charlie Chaplin-style results if you record someone walking towards you.

As usual with time-lapse, it’s the length of time you record the movement for that gives you the best results.

You can also get good results if you sit the iPhone somewhere and record the scene in front of it. We recorded this in a busy square. The movement of the people passing through contrasts with the stillness of the background.

7. Keep an eye on battery life

While time-lapse recordings are designed not to use up as much memory as conventional video would, beware that they do use a lot of battery power. If you want to record a 30-hour time-lapse you will most definitely want to plug your iPhone into a power source. Given that the camera app is one of the most power-hungry apps on the iPhone this isn’t surprising, but it’s something to keep in mind before you get too time-lapse happy.

Can I change the settings for time-lapse videos?

No. Take a look in the Camera section of the Settings app: there’s no mention of time lapse whatsoever.

Apple’s time-lapse feature is designed to be simple to use. Apple does all the processing in the background: you only need to select record and stop. This means you don’t get to choose how many frames are recorded or the speed at which the video plays back. Apple makes that decision for you.

If you want more flexibility, however, there are plenty of time-lapse apps you can download from the App Store. Good choices include Hyperlapse and Frameographer.

Hyperlapse, for example, allows you to choose the speed at which the video plays back. It also offers good image stabilisation features.