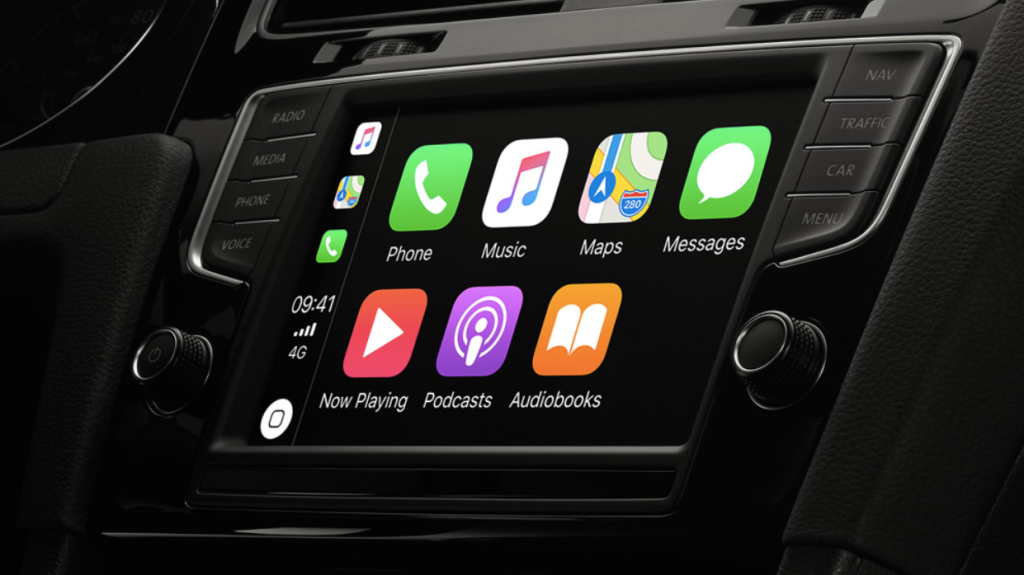 Music and iPhones are happy bedfellows. With Apple Music, Spotify, and other streaming services opening up an almost limitless supply of albums, it makes sense to use smartphones as our primary listening devices. But what if you want to play the latest bangers on your iPhone through your car stereo system? We have the answers in this article.

Can your car connect to your iPhone?

It’s hard to find a modern car radio that doesn’t come with an AUX port, or, even better, a USB port to connect physically to your iPhone. You may even have a Bluetooth connection so you can do the same wirelessly (although you’ll probably want to buy an in-car charger for your iPhone as Bluetooth does drain the battery).

However, should you have an older car with a stereo that doesn’t contain any of these connections, there are still several ways to listen to your music. It just requires the right accessory.

Which iPhone connectors do you have?

There is one other consideration. You need to make sure that the solution for playing music in your car will actually work with the iPhone you own.

While it’s unlikely that you’re still using an iPhone with a 30-pin connection as opposed to the Lightning connector, it is possible that your iPhone doesn’t have a stereo jack (or headphone jack) – in which case some of the options won’t be available to you unless you also purchase a Lightning to 3.5mm jack adapter, like this one from Apple.

How to connect an iPhone to a car stereo via AUX

If your car is relatively modern it may feature a 3.5mm auxiliary jack, either on the stereo unit or nearby (sometimes it’s located in the glove box). 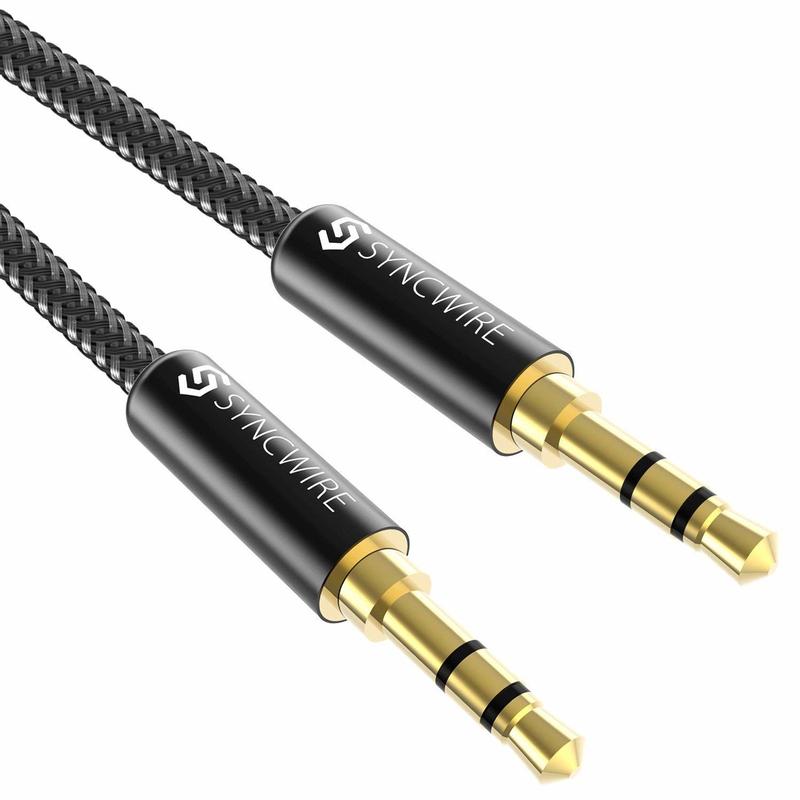 As we noted above, if you have an iPhone 7 or newer you’ll need to look for an AUX to Lighting connector as your phone won’t have the necessary 3.5mm port. One option is Belkin’s 3ft 3.5mm Audio Aux Cable with Lightning Connector, which costs £24.99/ $29.99 on Amazon (cheaper options are available, though). If you need a longer cable there is a 6ft option available too for £29.99/$34.99. 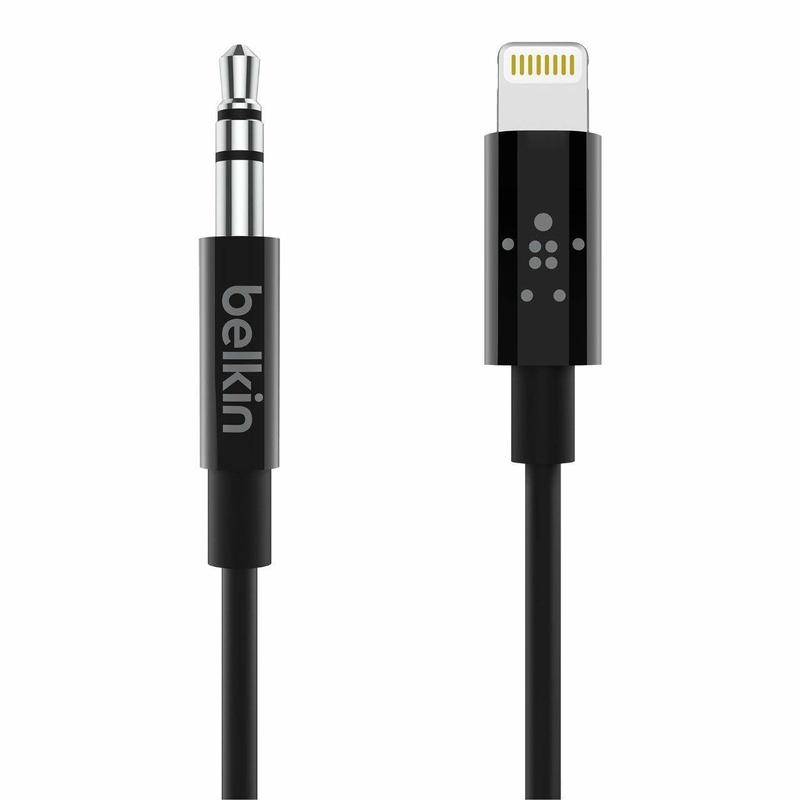 Some of us undoubtedly still use radios equipped with cassettes players. Even though cassettes are no longer manufactured, the hardware is still around, so what can we do with them? Well, it turns out that an ingenious device designed to convert the sound coming from a stereo mini-jack to a modified cassette has been in existence for years.

Amazingly, you can still purchase them from numerous different companies. A quick look through Amazon for “cassette adapter” will reveal page after page or similar devices ranging in price from £1.99/$2 to upwards of £20/$20.

One option on Amazon is the Reshow2015 Cassette Adapter which costs £8.99. In the US there’s a similar product by Insten that does the same job for $6.99. Note that it connects to your iPhone via an audio jack – so if you have an iPhone 7 or newer you won’t be able to use it without an adapter.

The way it works is as simple as can be: slot the cassette into the tape deck, connect the mini-jack to your iPhone, choose your song, press play on both the iPhone and your car stereo, and out comes the music.

The quality won’t be pristine, of course, but it’s much better than the alternative, which would be listening through your tiny iPhone speaker – hardly an immersive experience! 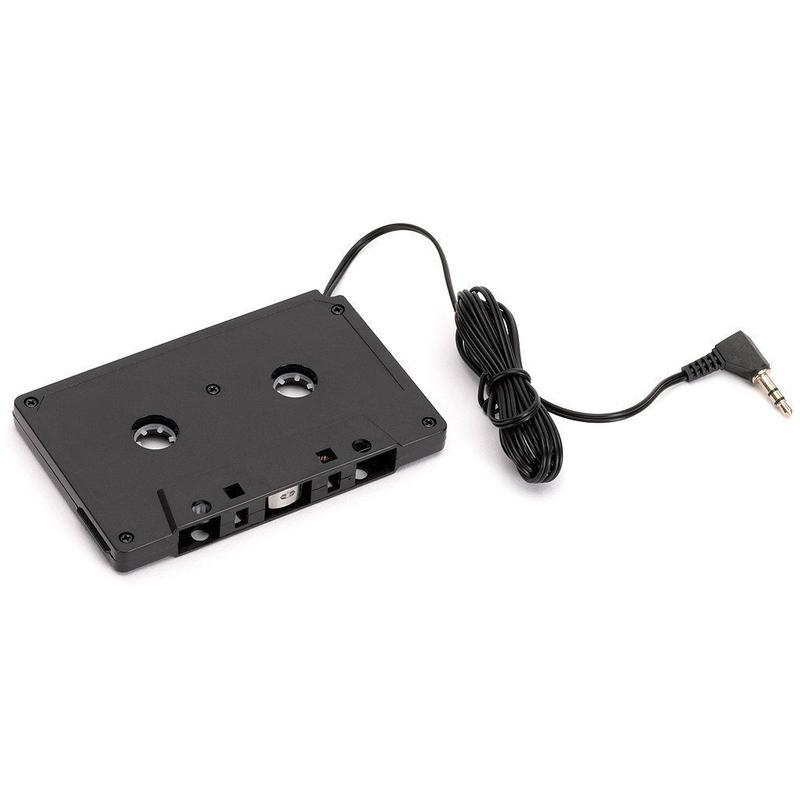 Can you use an iPhone with a CD player?

If you have a car stereo with a CD-player you may be wondering whether anyone has invented a similar solution for you. Unfortunately, you can’t put a fake CD connected to a stereo cable in your CD-player: since discs spin, the results could be messy. Which explains why such products don’t actually exist! Luckily there are some other options.

Instead, you need to look for a clever alternative, one which would also work on those old stereo cassette players: an FM transmitter. These are unsurprisingly more expensive, but they can work very well. The idea is simple: you connect your iPhone (or any other compatible iOS device) to it, and it starts broadcasting your iPhone’s audio on a particular radio frequency. Tune your car radio to that frequency and hey presto, you can hear your music wirelessly.

Again, there are lots of options on Amazon, but we think the Belkin In Car Tunecast 6 Universal FM Transmitted is a good buy. It’s £33.15 for the 3.5mm jack version, or a more expensive £64.60 if you want a Lightning connector instead ( you can buy it here). It also comes with a charger that fits in the car cigarette lighter/power socket, and via this, you can also charge your iPhone.

In the US there’s the JETech Wireless FM Transmitters (3.5mm) which is available for $13.99, or the iTrip Auto FM Transmitter for iPhone (Lightning) that costs $14.99.

If you don’t want to use cables at all, then CHGeek Bluetooth FM Transmitter can route your music through the car stereo for a very reasonable £12.99 on Amazon UK or $15.99 on Amazon US. 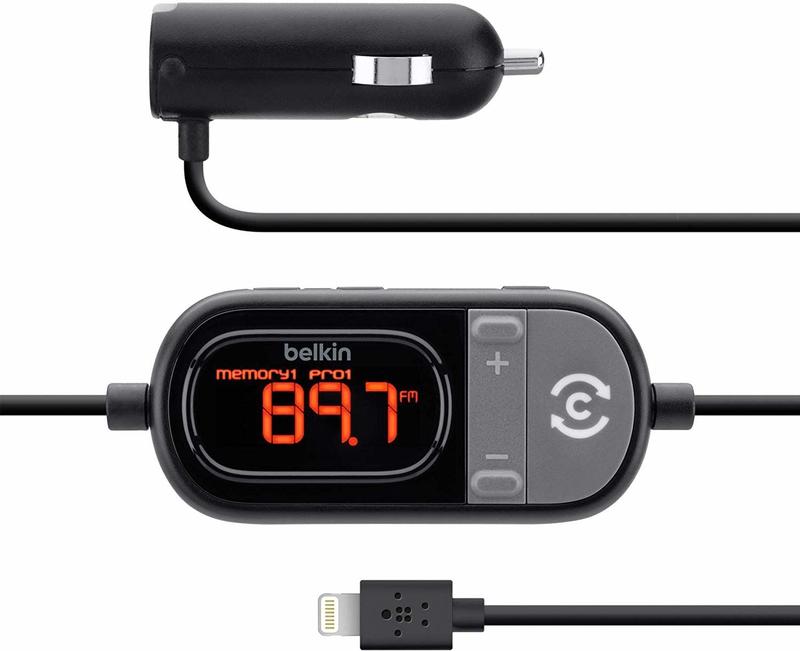 FM transmitters work by broadcasting the music playing on your iPhone on a frequency that can be picked up by your radio. If you’re in an area where there are a lot of radio stations it can be tricky to find a gap in the radio waves. Belkin’s Tunecast will scan and choose the best frequency for you, and you can also save the blank stations you find so you can tune to them quickly next time you want to play music in your car.

This is the main problem with the FM transmitter solution – there are many radio stations out there so you could hit some interference even if the device usually broadcasts in little used frequencies. You can of course change that frequency manually, but you might end up taking some time finding the perfect one, only to move to another geographical location on your travels and have to do the process all over again.

Get a new car stereo

To be honest, unless there’s a specific reason why you don’t wish to part with your car’s old stereo, the absolute best option would be to fit a new one. Halfords, for instance, offers a great many models, all with USB ports and fancy modern features. You need to be careful, however: just because it has a USB port doesn’t mean it will necessarily work with your iPhone; you might be able to hear your music, but your iPhone may not charge, for instance.

It’s therefore important to make sure you get one with a ‘made for iPhone’ or MFi sticker. Alternatively, if you can go into a showroom with your iPhone and its cable, the best way to be absolutely sure your potential new car stereo will work as expected is to hook it up to the ones on display and try them out for yourself.

Of course, this would be a more expensive solution than those mentioned above, but what you’ll get is much better clearer sound (beating the cassette stereos hands down), no interference from radio stations (take that, FM transmitters), plus your phone will be charging while playing, saving you from having to buy a 12v charger. Yes, car stereos can cost upwards of £300/$300, but some iPhone-compatible models will only set you back by as much as £45/$45, and at that price, it may well be worth leaving the past behind and embracing the iPhone-music-enabled future.

But there’s one more option that might make you consider forking out even more for a new car stereo, as we’ll discuss next.

Install CarPlay in your car

Back in 2014 Apple launched CarPlay, an iOS-connected system that provides direct access to your iPhone allowing you to use certain apps, respond to text messages and play music. Recent updates in iOS 12 also mean that you can use CarPlay now with third-party navigation apps such as Google Maps and Waze.

For a deeper explanation of the technology and capabilities of the system, read our What is Apple’s CarPlay? guide.

Initially, CarPlay was only available as an integrated display system provided as an optional extra when you bought a new car. Now there are ones that can be retro-fitted, such as the Pioneer CarPlay system demonstrated in the video below.

There’s also the Pioneer AVH-1300NEX DVD Multimedia receiver which is available on Amazon for $269.

The touchscreen display on the Pioneer replaces the existing radio or CD player in your car. It displays information and uses Siri so that your attention is focused on driving. You just say “Hey Siri” to use the assistant hands-free.

There are a limited number of apps available in CarPlay (for safety reasons more than anything), but along with Phone, Messages and Apple Maps you also get Music and Podcasts – so you will be able to play the music on your iPhone through your car stereo. For more information, we have an article about getting CarPlay in your car.

Note you may also need to budget for converter cables if your car doesn’t have standard ISO connectors (most don’t) and also a special cable or adapter if your car has an existing USB port, since it’s unlikely to connect directly to the back of the head unit.

Use a Bluetooth speaker

Should none of the options above appeal, then there are always the faithful old Bluetooth speakers. If you just want to make your iPhone music, podcasts, or audiobooks loud enough to hear while driving, Bluetooth speakers can achieve this with no fuss at all. Plus there’s the added advantage that you can take them with you when you leave the car.

Take a look at our Best Bluetooth speakers chart for the current pick of the crop. 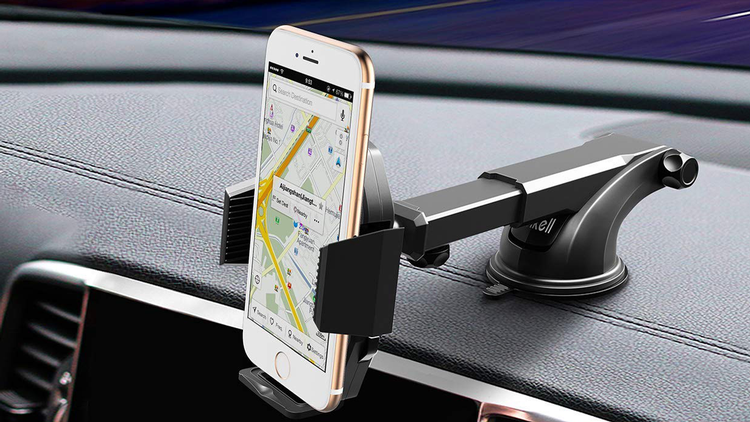 Charging your iPhone in your car

One last thing to mention. Don’t forget though that playing music will drain your battery so getting yourself a 12V charger for your iPhone would be a useful addition to your car.

Again, you’ll find a long list of available options through Amazon, but consider choosing one that can handle enough power to charge an iPad. Even if you don’t yet own a tablet, more power means your iPhone will charge up faster. Also, should you ever get yourself an iPad, you won’t need another charger for it – you’ll be able to swap between the two devices.