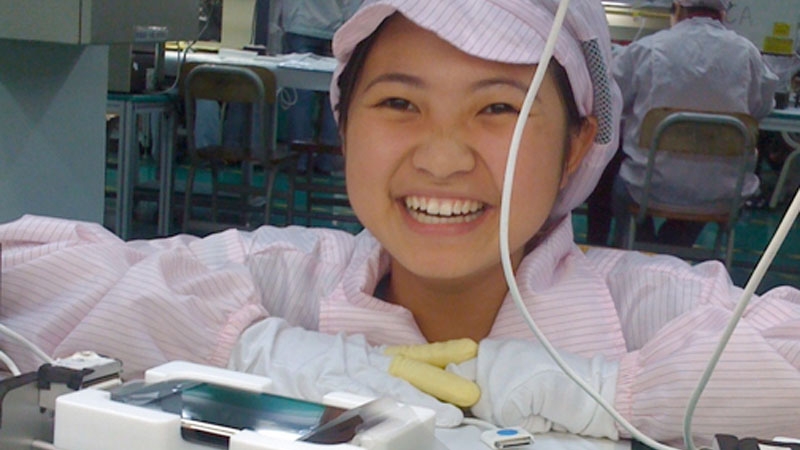 The BBC last night aired a Panorama programme highlighting violations at the factories where iPhones are manufactured, as well as the dangers involved in mining some of the tin that ends up as solder inside Apple products.

While the Panorama programme did make note of the fact that Apple has gone to some lengths to moderate the practices within the factories of its suppliers, and to try and trace the origin of the soldering tin that it uses, it was very much a programme about “Apple’s factories” and “Apple’s use of illegally mined tin”.

What Apple is, is the only company to have made moves to stop illegal practices such as underage employment in factories, massive overtime, and close inspection of the source of the materials it is using.

Apple has been singled out because it is Apple. What about Samsung and the other companies that make their products in the same factories who buy their materials from the same suppliers? Well that wouldn’t make such good TV would it!

Pegatron (the owner of the factories where the iPhone is put together) also manufactures laptops, netbooks, desktop computers, games consoles, motherboards, LCD TVs and much more. Apple is by no means its only client. Pegatron manufactures electronics for other companies including Google, Microsoft, Hewlett-Packard, and Dell.

Pegatron has apparently responded to the BBC claiming the report was heavily biased and their factory standards were normal for China. What of the other factories in China where other electronics are manufactured? Chances are that without Apple keeping a beady eye on them the violations are much worse, of course that’s pure speculation, but it’s also unlikely to make as many headlines so don’t expect to read about it any time soon.

Apple is at least addressing the issues with the way its products are manufactured. The only point that could be made against Apple is the fact that the company makes wide margins on the sales of it’s iPhones – in the programme the researcher mentioned around £200 per handset. Of course, there is more to the manufacturer of an iPhone than the parts and the labour. Apple’s research and development and the operating system are also significant costs.  However, even with that in mind, the fact that companies choose to build their products in factories in China and Taiwan is because labour is incredibly cheap and hard working. If Apple was manufacturing the iPhone in the US, for example, then we’d be paying a hell of a lot more for our handsets because the costs would be so much higher due to the rights of the workers to be paid a living wage and work a reasonable amount of hours in the day.

Chinese workers should have exactly the same rights as US workers, but there is also the possibility that if they had them, and the cost of production in these factories went up, Apple and other manufacturers would look else where for cheaper labour. And then what would happen to China?

Every electronics manufacturer is using those factories and that tin. Back in 2013, Samsung admitted that it was using tin from mines in Indonesia, like Apple it said it was committed to addressing the problem.

But how many manufacturers are getting away with doing nothing to monitor the manufacturer of their goods. It’s always Apple that gets the headlines. At least the BBC Panorama did make it clear that Apple does have guidelines in place even if their suppliers are ignoring them, but it really ought to have been a programme about how China abuses workers, how people are so desperate in Indonesia that they put their lives at risk, and how we’re all to blame because we want cheap gadgets. It’s not only Apple who is to blame!

The history of the Apple factories

Apple’s issues with the factories that manufacturer its products have been ongoing for some time. As long ago as 2006 a story in the Mail on Sunday revealed that Apple’s iPods were made by workers who earn as little as £27 per month. Back then the factories in question were Foxconn. Foxconn was also in the news a lot in 2010 as the company (owned by Hon Hai Precision Industry) was targeted by human rights activists over long working hours, poor conditions and low pay. By February 2012 an ABC nightline news story showed exclusive footage from inside Apple’s controversial Chinese factories. There have also been suicides at the Foxconn factories, that some blame the working conditions for, although the Foxconn CEO blamed those worker suicides on breakups and family disputes.

Tim Cook visited the Foxconn Production line in March 2012, just before the Fair Labour Association released its first report on worker conditions in the factory. In August 2012 Foxconn was said to be making progress with the conditions in its factories, but by September 2012 Apple supplier Foxconn denied using forced student labor in Chinese factories, and then in May 2013 Apple shifted its supply chain away from Foxconn to Pegatron. In July 2013, Apple announced it would investigate new claims of labour violations at Pegatron, after watchdog group China Labor Watch (CLW) announced its investigators had uncovered labor violations in three factories of Pegatron Group.

As for the use of tin – environmental group Friends of the Earth accused Apple of ‘trashing’ Indonesia thanks to use of tin in iPad and iPhone back in February 2013. By July that year the ecowarriors were picketing Apple Stores, accusing Apple of ‘destroying tropical forests, wrecking lives’.

What Apple has been doing to monitor these violations

Apple has been auditing its supplier facilities for the better part of a decade – and has even invited third parties such as the Fair Labor Association to conduct its own investigations. In its full yearly report, the company breaks down the violations it found at those facilities, including discriminatory practices, failure to protect juvenile workers, and excessive working hours, as well as the moves Apple has asked its suppliers to take to correct the infringements. Apple also cracks down on the practices of underage hiring and involuntary labor; in both cases it requires the supplier to make financial reparations, and for underage workers, companies are required to return them to a school chosen by their family, finance their education, and provide income equivalent to what they received as an employee.

Environmental practices also come under scrutiny in Apple’s reports, with particular focus on conflict minerals. In the past Apple has confirmed that all smelters of tantalum in its supply chain were established to be conflict-free by third-party auditors, for example. Similar steps are being taken for suppliers of the other conflict minerals in Apple products: tin, tungsten, and gold. Apple even releases a list of the smelters and refiners it uses, along with their verification status; the company says its goal is to increase the accountability of its smelters and provide information for its stakeholders.