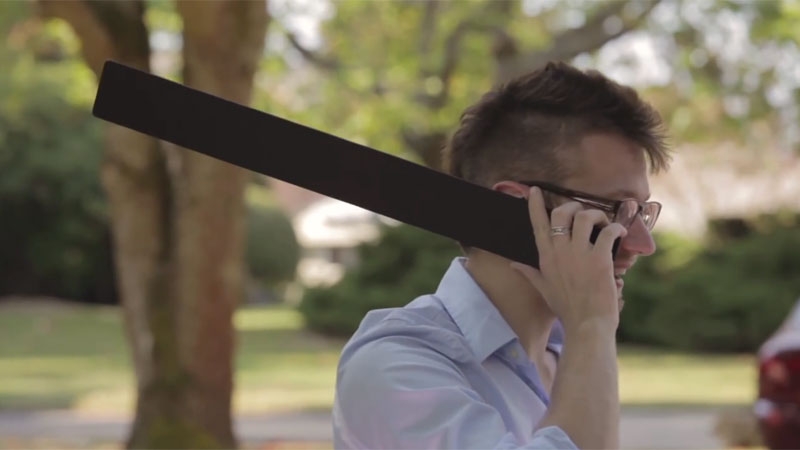 Apple has made a number of iconic ads and promo videos over the years, many of which have inspired parody versions online. Here we’ve gathered together some of the funniest takes on the sometimes overly serious world of Apple products. Enjoy.

When Siri was first launched on the iPhone 4S it drew a fair amount of fire from comedy sites across the internet. One of the best was this video that replaced Siri’s voice with that of GLaDOS, the psychotic artificial intelligence from the hugely popular Portal videogame series. Rather than the helpful, dutiful servant that Siri was intended to be, GLaDOS has a different relationship with her users, marked mainly by deadpan insulting answers to the various tedious tasks she is expected to fulfil. All that being said, we still prefer her to the actual Siri.

The sight of various Apple luminaries sitting in heavenly white studios explaining how their miraculous new creation will change the entire world thanks to a slight upgrade on the last device, is a comedy writer’s dream. It’s no surprise then that the iconic ads have been mercilessly parodied on a number of occasions, with the latest being one of our favourites. IKEA has launched its new BookBook campaign, which explains the incredible benefits of its tactile touch interface, no-lag page renders, and thumb powered speed browsing. You’d never think that a simple catalogue could be so….revolutionary.

When the iPhone 5 was introduced, much was made of its taller screen that retained the same width as previous models. This was in contrast to Android alternatives that were generally bigger in all directions. This video took that principle and pushed it a little further, introducing a new iPhone 5 that was ‘18% thinner and 795% taller’. The new iPhone was intended to make scrolling a thing of the past, and offered the amazing ability to take panorama images in a single shot. Actually there are several apps ideas that we’d love to use in real life, including an amazing lightsaber option. Screen repairers might also appreciate that one.

The JLE channel on YouTube has an impressive track record of Apple parody videos and we could have picked any one for this entry. Starting back with the iPhone 4, the resident comedians have periodically released beautifully wicked digs at the classic talking heads videos. Jony Five extolls the various virtues of the products, while Rob Mansfeld, who heads up the camera department, slowly slips into depression with every iPad release. Of all the ad parodies, these are definitely the most finely tuned, and as you move through the playlist you see running jokes that make them even funnier. To quote Jony Five ‘amazing, extraordinary, revolutionary…adjective.’

It hasn’t taken long for the yet to be released Apple Watch to receive the parody treatment. In this video we see, once again, the usual white backdrop, devices gently spinning in the air, and a fair amount of sting being thrown at the new digital timepiece. ‘Can it tell time? Yes! Do you have to charge it every night? Yes, just like a regular watch.’ The heartbeat feature, maps, watching YouTube videos, and Apple Pay all come under scrutiny, while the final strapline sums up the general feel – ‘You didn’t really ask for it…so here you go.’

While definitely in the parody mould, iDiots is actually a very classy short film that takes a huge swipe at the nature of iPhone users and how Apple treats them. The little red robots line up at the sound of a claxon, buy their new phones, then become obsessed with the way they can view cat photos, make whipping sounds, take photos, and instant message each other. When their enjoyment is at its peak a nasty, bigger robot arrives to spoil their fun…but help is at hand. It’s a wonderfully made video that is a cut above most homemade alternatives.

The opening of an Apple Store on the day of an iPhone release has become a staple of modern tech news reporting. The queues, the energetic shop assistants, the indie developers camping outside to promote their new app…sorry, did we say that? Somersby Cider took this scenario and applied it to the excellent idea of a new drink being released at its own, real, Apple store. The result is a very funny, charming, advert that is instantly recognisable, while including some top notch word play. This includes an assistant showing an interested couple how to drink a pint ‘move towards the mouth…and, in to face.’ Genius.

Tribalism between technology fans has been around for many years. In the 80s school kids argued the opposing virtues of the ZX Spectrum and Commodore 64, while three decades later internet forums are awash with rabid discussion over who are the most stupid, brain-washed type of mobile phone user. Nokia capitalised on this odious behaviour in its terrific ‘Don’t Fight’ ad, which pits Android and Apple users against each other in a massive fight at a wedding. The comments also feature our all time favourite from ‘Someone intelligent’ who wrote – ‘Apple followers, and Android followers, all of you will burn in the lake of fire for not choosing blackberry. The blackberry is the true inspired Phone of God.’

Samsung is never one to miss an opportunity to put the boot into Apple. The two companies are, after all, not entirely the best of friends. One of the first ads the Korean giant ran mocking its biggest rival, featured its then new Galaxy Note phablet. A line of bored looking Apple fans are queuing up for the release of a new phone when one spots someone using a Galaxy Note. Inspired by its magnificence, and the suddenly arrival of The Darkness’ Justin Hawkins, much wild celebration ensues with stunt motorcyclists, death slides, and frantic overacting.

Anyone who has ever watched or read The Onion will know that it’s one of the funniest sites on the web. In this video the team at Onion News Network unveils a brand new laptop from Apple called the MacBook Wheel, that does away with the keyboard entirely, replacing it instead with a giant click-wheel. There’s also predictive sentence technology built-in, which offers the likes of ‘The amiable Althusserian scholar asked the aardvark for an absinthe’ when ‘The a’ is entered. ‘Everything is just a few hundred clicks away’ boasts the Apple representative, smitten with the literally revolutionary product.