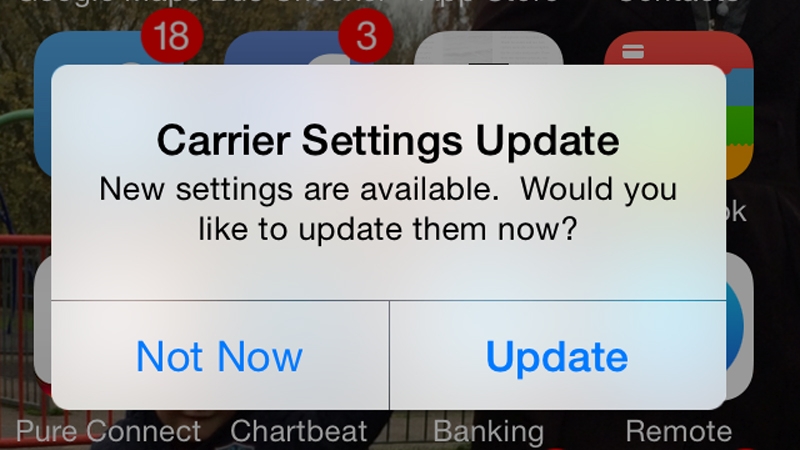 Is this iPhone ‘carrier settings update’ safe to download? I keep getting a message asking me to update.

A lot of iPhone owners – including the Macworld team – have recently had dialogue boxes popping up on their iPhones telling them about a ‘Carrier Settings Update’.

Carrier Settings Update New settings are available. Would you like to update them now? Not Now | Update

You may be wondering if it’s safe to accept this update, and what effect it will have on your iPhone if you do. Many people got burned when updating to iOS 7 or iOS 8, finding that these updates slowed down their iPhone (particularly if it was an older iPhone) – will this carrier settings update have any negative effects on iPhone performance?

It is safe to accept this update – it nearly always is with iOS devices, because it’s so much harder for malware and viruses to break into the closed operating system (although there are iOS viruses – read our guide to iPhone security for more on that).

And all the evidence we’ve seen indicates that you don’t need to worry about the carrier settings update affecting the speed of your iPhone – or locking it up for a long time, as sometimes happens with large downloads or major updates. We have all accepted the update and in each case it was finished in a matter of seconds; it didn’t even need to restart the iPhone. We’ve not noticed any change in the way the phone behaves, its speed, or in the functions we are able to access.

In the short term, declining the update doesn’t appear to cause any major problems. One of our team put it off for several days and was able to use his iPhone’s phone and mobile data functions without any problems. But we are told that carrier settings updates are generally introduced to tackle specific problems, so we would recommend that you accept the update sooner rather than later.

What is an iPhone carrier settings update?

One of the other things Apple explains is that some carrier settings updates aren’t optional. When a settings update is compulsory, you will only see a message indicating that the update has been downloaded: you then tap ‘Ok’, rather than choosing whether to update or not.