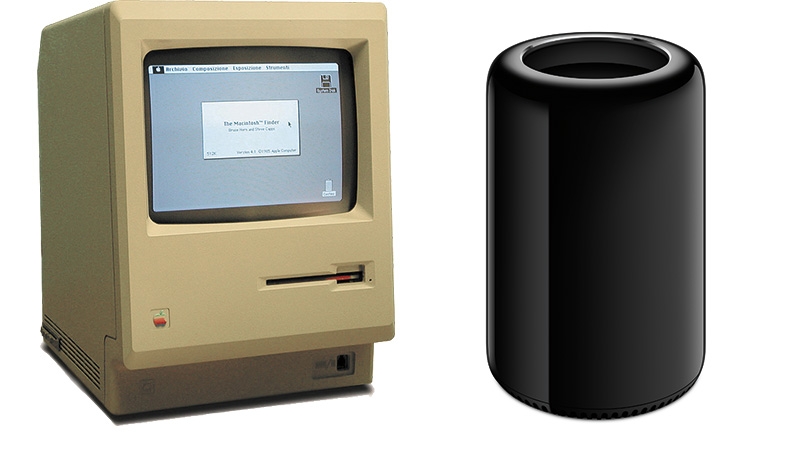 Ever wondered how Apple’s classic Macintosh 128K from 1984 compares to the brand new Mac Pro? We have – so we decided to take a closer look. How does the computer that defined Apple compare to today’s premium powerhouse?

The Mac Pro is the most powerful Mac ever made. With up to 12 cores, 128GB of RAM and ultra-fast PCIe-based flash storage, it whips through the most demanding of tasks. 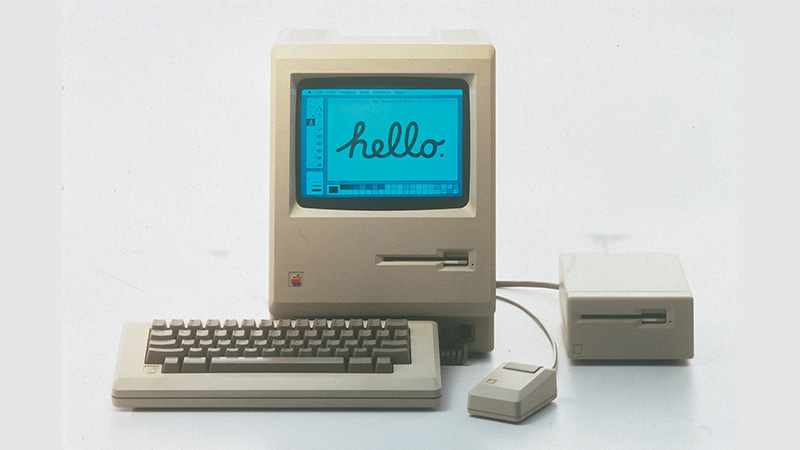 The new Mac Pro is Apple current premium computer. Launched in late 2013, it represents a radical new direction for Apple’s Intel-based workstation. The new Mac Pro eschews a classic tower case in favour of a small circular base designed to house a thermal core and single fan. Inside the new Mac Pro there’s a single CPU, but it’s a whopper: up to 12-core Intel Xeon E5 with Turbo Boost speeds up to 3.9GHz.

The Macintosh 128K is the original Mac. The computer that was released initially as just “Apple Macintosh”. A labour of love started at Apple by Jef Raskin and championed by Steve Jobs. It’s possibly the most important computer ever made, and Apple itself claims that it “reinvented the personal computer in the 1980s with the Macintosh”.

One thing that sticks out here is the design similarities. The Macintosh 128K unit did not rely on a fan; instead it relied on convection cooling, which made it quiet. This was at the insistence of Steve Jobs. A fan was introduced in later models to prevent component failures. The new Mac Pro features a fan, but only a single one, and it mostly consists of a thermodynamic cooling design that sucks air in at the bottom and ejects hot air from the top.

The Macintosh 128K features a built-in screen, so it is more like the iMac in that respect (it also shipped with a keyboard and mouse, both of which are absent in a new Mac Pro).

There are notable differences between the ethos of the Mac Pro and the Macintosh 128K. The original Macintosh 128K was not conceived to be a particularly powerful computer: instead it was mostly designed to offer decent graphics performance at a dramatically lower price than other computers (at the time most computers with GUIs cost well over $100,000). A teardown by iFixIt shows the Macintosh 128K’s innards in all its glory.

The Mac Pro, on the other hand, is designed to be a standout computer that offers radically improved performance. The new Mac Pro runs the same operating system as all the other Mac computers, though. 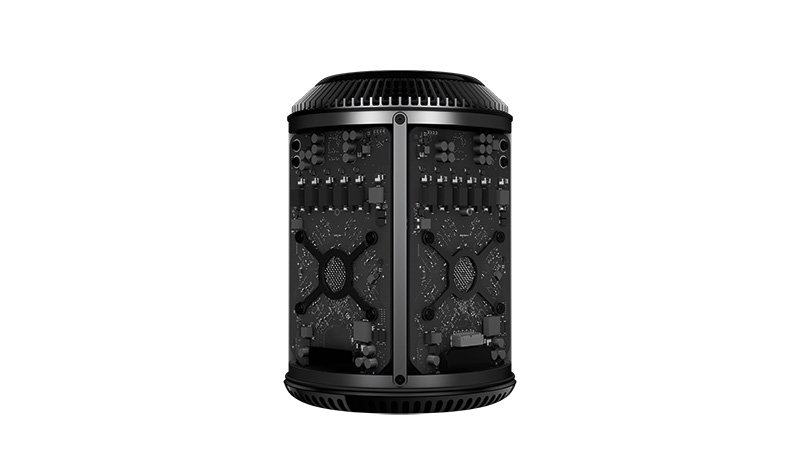 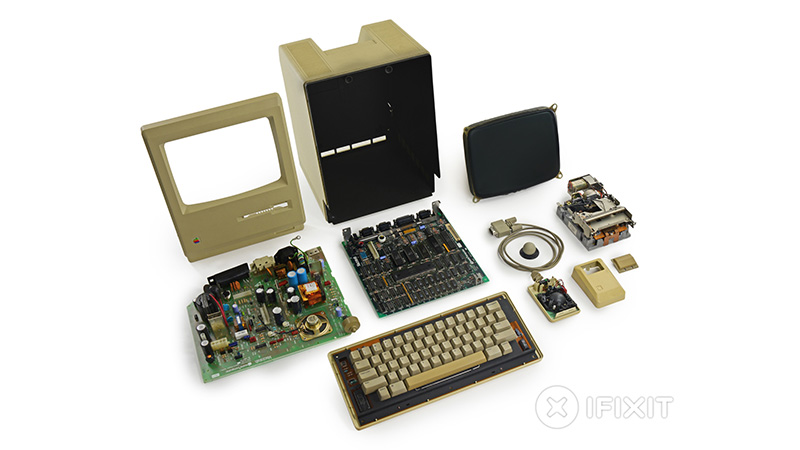 It shouldn’t come as much of a surprise that the new Mac Pro is somewhat more powerful than the Macintosh 128K. Here are some standout statistics:

1. The Mac Pro’s CPU, at 3.9GHz, is 500 times faster than the Macintosh 128K. And that’s before taking into account the multiple-cores and Hyper Threading technology.

2. The Macintosh had 128K (hence the name) and the Mac Pro has a maximum of 128GB RAM (which is itself pretty amazing). That’s 128000000K, giving the new Mac Pro a million times as much memory as the first Macintosh.

3. The Dual AMD GPU system of the Mac Pro is impossible to compare to the Macintosh 128K graphics system in any meaningful sense. The Macintosh 128K shipped with a number of chips to control the display, but none of them really equate to a modern GPU. It’s listed by Apple as just 1-bit.

5. You could fit 47 Macintosh 128K screens into the three 4K monitors powered by a single Mac Pro.