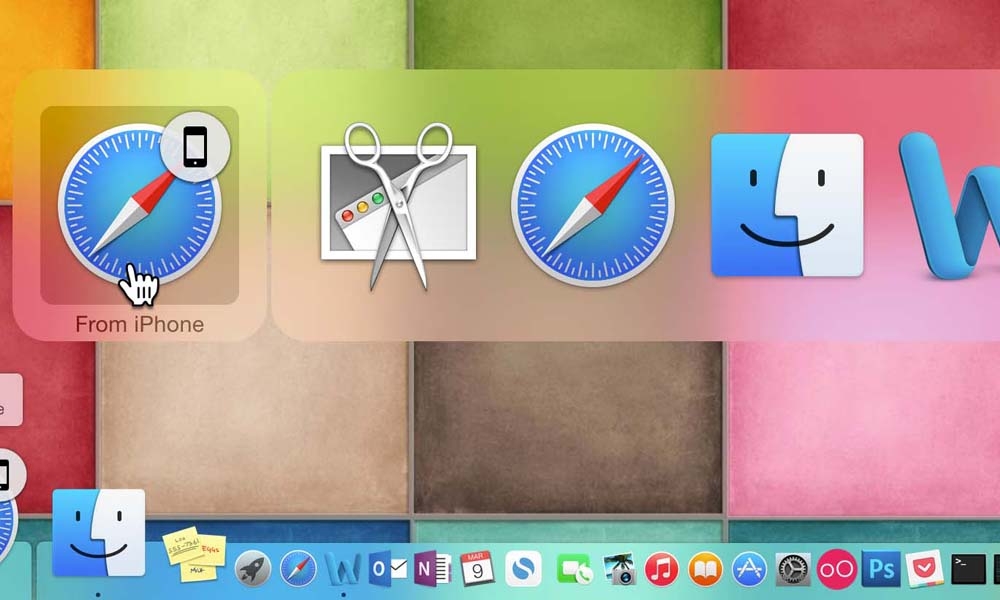 Handoff is the future, as far as Apple is concerned. It’s a way of linking apps across all your Apple hardware in order to quickly and easily share tasks.

However, let’s clear up some confusion first of all. What’s the difference between Continuity and Handoff? Continuity is the name of the all-encompassing technology introduced with iOS 8 and OS X Yosemite that lets you share things between devices, whether that’s phone calls, or text messages, or your phone’s Personal Hotspot connection. Read: What is Continuity on the Mac .

The ability to answer a phone call on your Mac is part of Continuity but not Handoff!

Handoff is one part of Continuity. It allows you to pick-up a task started in an app on another device or Mac. Most core Apple apps like Safari, Maps, Calendar, Mail, Reminders and so on are Handoff-ready, as are some other Apple’s other apps like the iWork suite (although not iMovie or GarageBand or at least not right now). An increasing number of third-party apps are compatible too.

With Macs the situation is a little more complicated due to the sheer number of models out there. For starters, you’ll need to be running OS X Yosemite, which you’ll find in the Mac App Store, if you haven’t already upgraded. One way of subsequently checking if Handoff is available on your Mac is to open System Preferences, click the General icon, and then look for a checkbox near the bottom that’s labelled Allow Handoff Between This Mac and Your iCloud Devices. If this ain’t there, then you ain’t got Handoff! 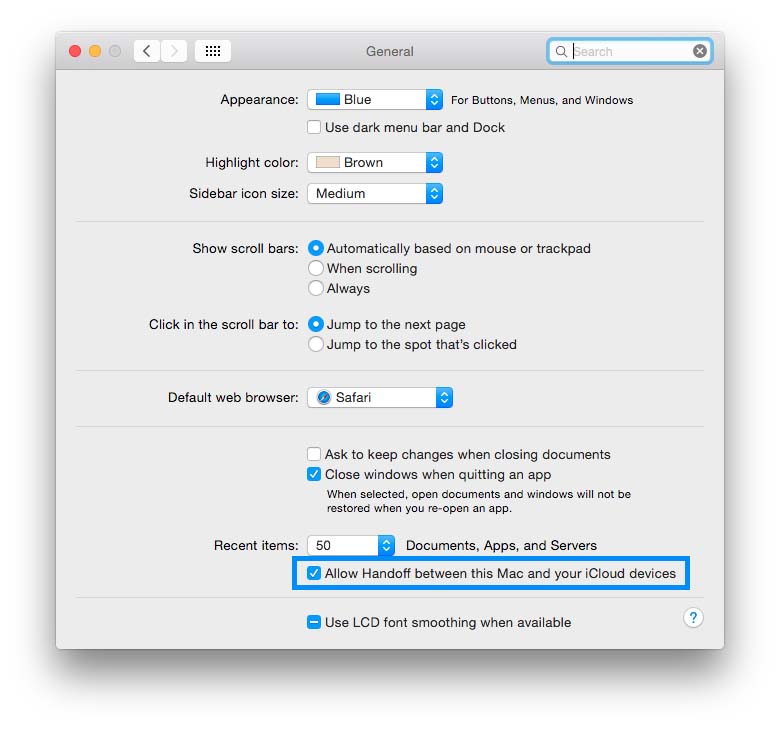 If there’s no option for Handoff in System Preferences then your Mac isn’t compatible!

Pro tip: You might be able to hack Handoff so it works on older Macs, going back as far as 2008 models.

You’ll also need to enable Handoff on all your iOS devices. Open the Settings app, tap the General heading, and then Handoff & Suggested Apps. Ensure the switch alongside Handoff is toggled.

Note that Handoff requires the devices to be within 33 feet of each other – surely not an issue unless you live in a mansion! – and may take a few minutes or even hours to start working fully once enabled. Just be patient!

All your apps will need to be bang up-to-date too, so tap/click the Updates button in the App Store app.

Handoff on a Mac

Let’s test Handoff in a really simple way. On your iPhone, iPad or iPod Touch, open Safari and browse to any web page (and this is important – it’s not enough to simply start Safari and leave it on a blank page). Then jump on your Mac and look to the left of the Dock. See a new icon there? Clicking that will open that web page in Safari on your Mac. You can also use Cmd+Tab to bring up the task switcher, in which case an icon for the iOS device’s Safari session will be visible at the very left.

Macs can accept Handoffs via the Dock, or via the task manager that appears when you tap Cmd+Tab

Crucially, you don’t have to do anything to make Handoff share the site. It’s all automatic in the background.

Perhaps surprisingly, there’s no way within an app itself to be aware of a Handoff from elsewhere. However, apps like Safari let you view iCloud Tabs, while apps like Reminders and Notes sync rapidly so any edits made elsewhere should be reflected virtually instantly.

On your Mac open Safari and visit a web page. If your iOS device is locked, waking it up will show a Safari icon at the bottom left of the screen near the Slide to Unlock message. Sliding this icon upwards, and then entering your Apple ID (or using Touch ID) will take you straight to the relevant app and the handed-off site, link or document.

If your iOS device is already in use, double-clicking the Home button to open the multitasking list will show the Handoff app in the thumbnail listing of apps, to the left of the thumbnail representing the app launcher. Selecting it will again take you straight to that app. 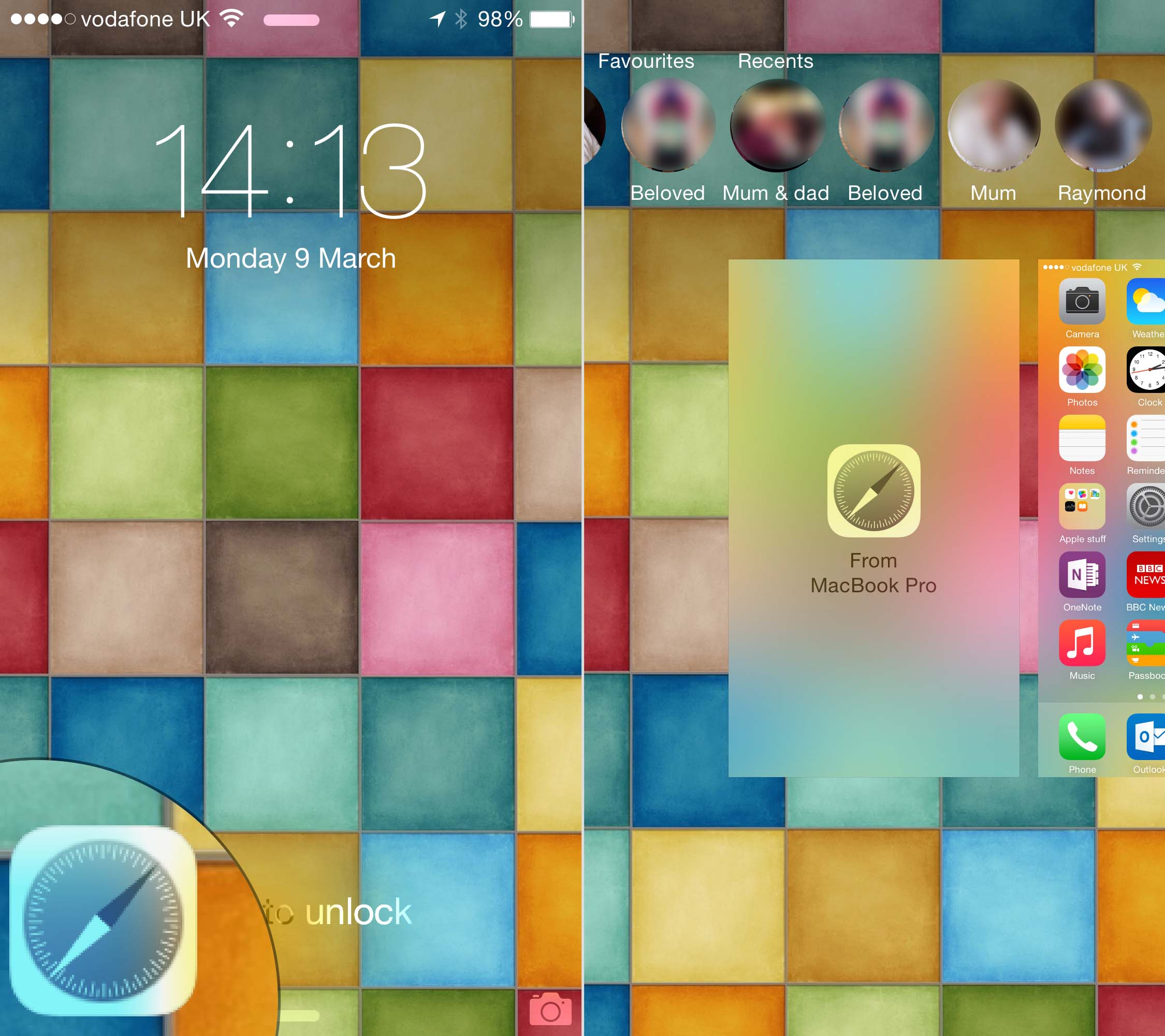 Handoff appears on iOS devices on the lock screen at the bottom left, or in the task switcher

Handoff isn’t only Mac-to-iOS, or vice versa. Browse a site in Safari on an iPad and a Handoff icon will appear on your iPhone’s lock screen or task manager. In fact, an icon will appear on all iOS devices you own – provided all the devices are compatible with Handoff, signed in with the same Apple ID, and within range. The same is true should you own more than one Mac – you can start a Mail message on your MacBook and then continue it instantly on your iMac courtesy of Handoff.

However, Handoff isn’t necessarily about specific apps. This is where it gets a bit complicated.

Let’s take an example of a Mac on which Opera is set as the default browser. Opera is compatible with Handoff and opening a web page in Safari on an iOS device will show the Opera icon to the left of the Dock, and in the task switcher. Selecting the icon will open the page in Opera.

In other words, Handoff from Safari on iOS merely passes through a URL to whatever browser is set as the Mac’s system default.

Conversely, opening a page in Opera on your Mac will show a Handoff icon for Safari on your iOS devices.

It’s still very early days for third-party support of Handoff and it’s yet to be seen how app developers will make full use of it. For example, whether the above situation will be true of email clients remains to be seen because no third-party email client yet supports Handoff.

There are more tutorials for using the new features in iOS and OS X Yosemite here:

AirDrop: Use AirDrop to transfer files from iPhone to a Mac and Mac to iPhone in Yosemite