Apple has introduced a new MacBook Air, finally replacing the popular laptop that it hadn’t updated since 2015, adding a Retina display and Touch ID. The new MacBook Air is crafted from recycled aluminium to make it the most environmentally friendly laptop you can get, and there’s a choice of three colours, Gold, Silver and Space Gray.

If you were hoping the rumours that the new MacBook Air would cost less than £1,000/$1000 you will be disappointed. The new model starts at £1,199/$1,199. Apple says it’s its cheapest laptop with a Retina display. It’s available to order now, following its release date of 7 November.

The new prices are:

These don’t compare particularly favourably to the previous prices of:

However, Apple is still selling the 2015 MacBook Air for £949, so you can still get a Mac laptop for under £1,000, but it’s an old model. If you shop around you can actually get some very good deals for this model, many UK retailers are selling the older model for under £800 and it’s likely US retailers are offering similar deals. Under no circumstances buy the entry-level MacBook Air from Apple where it will cost you nearly £200 more. You can see some deals above, we also have a best MacBook Air deals article. 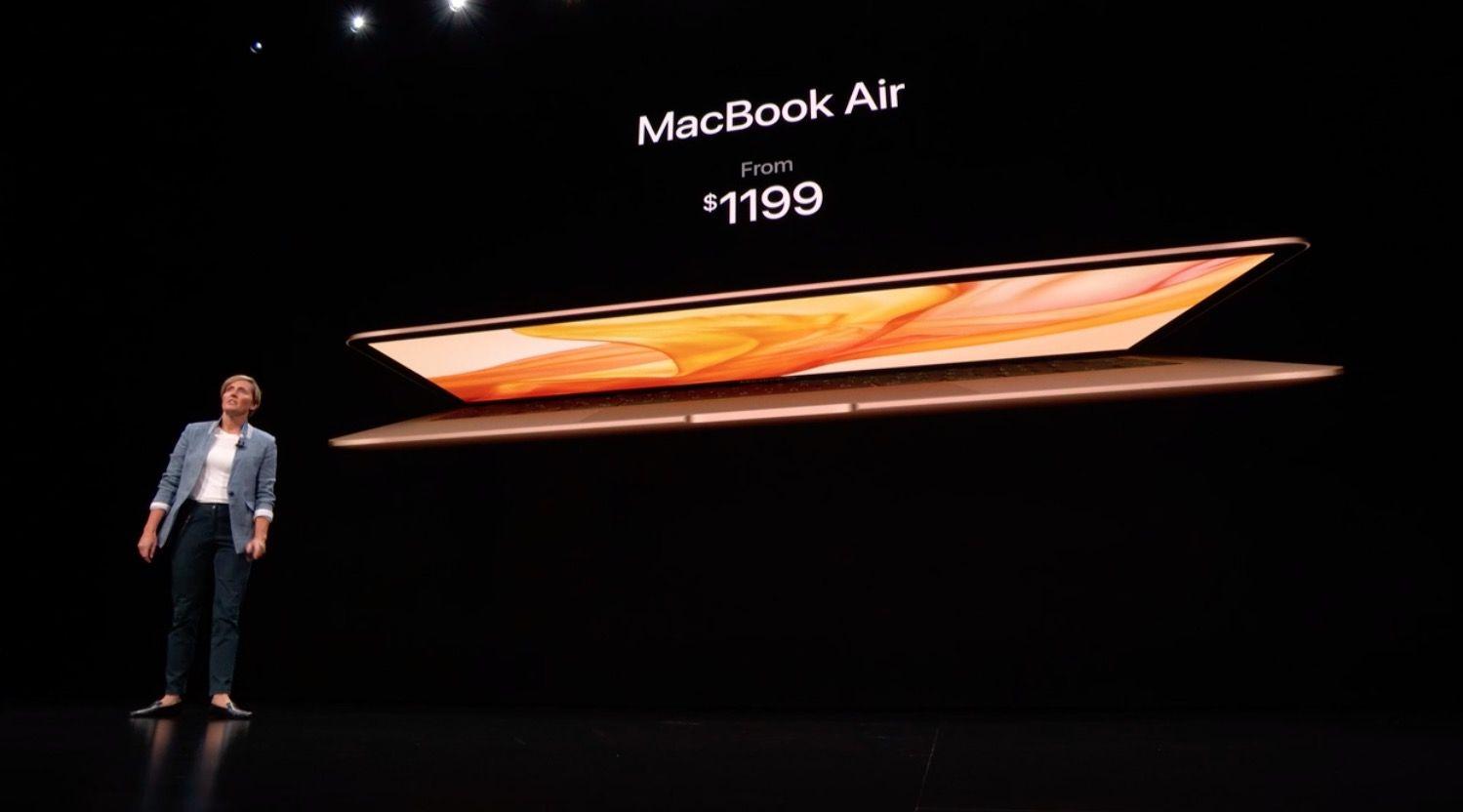 Because the screen stretches almost to the edge of the display thanks to bezels that are 50 percent thinner, the MacBook Air is smaller than its predecessor, despite having the same size screen.

Speaking of size, it’s also smaller than the previous model, weighing in at 1.25kg or 2.75lb (compared to 1.35kg for its predecessor). 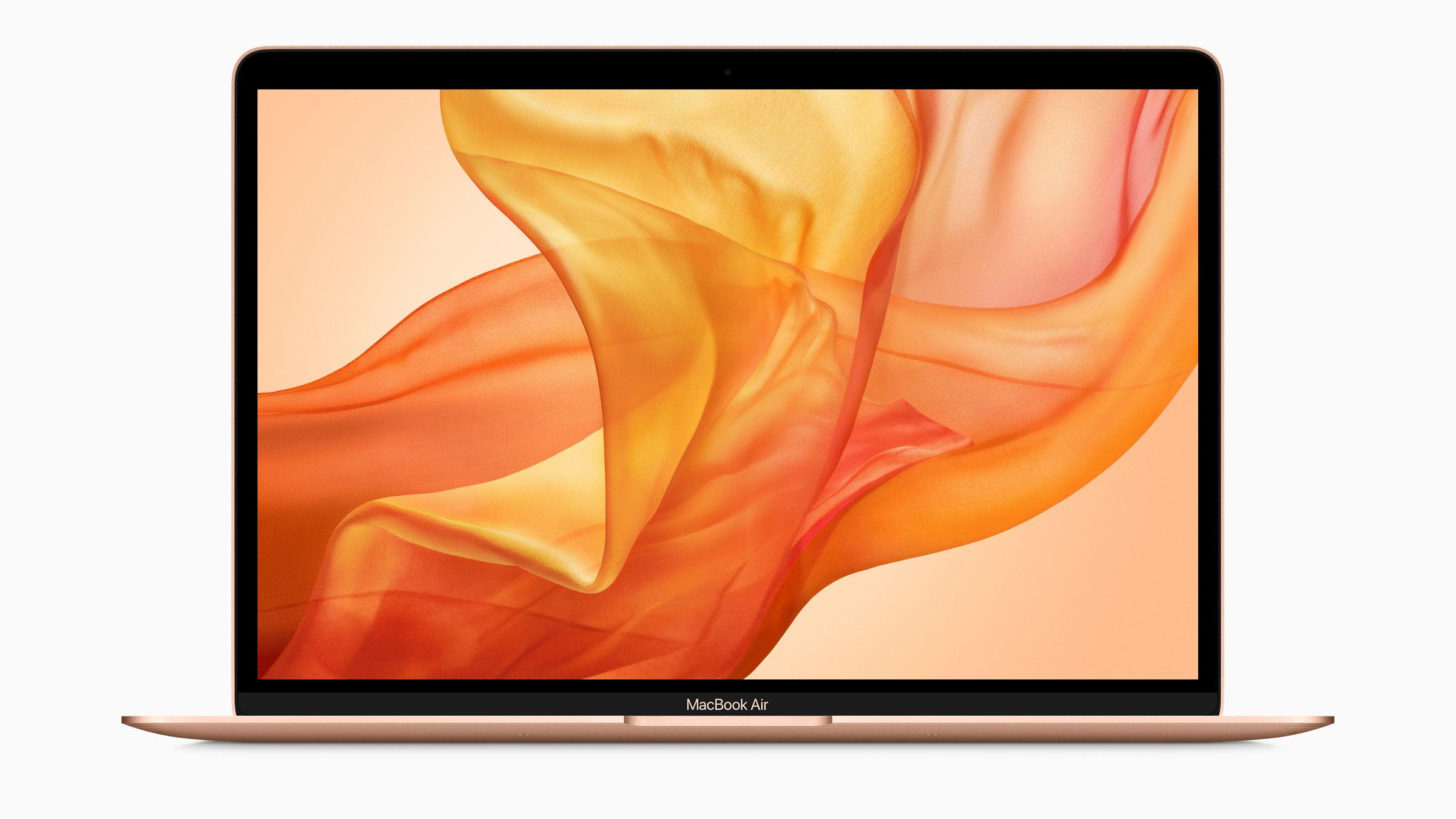 It might be all about Face ID on the iPhone and iPad (see our story about the new iPad Pro) but its all about Touch ID on the MacBook Air. Apple’s added a Touch ID scanner in the top right corner so that users can pay for things using Apple Pay as well as unlock their Mac using fingerprint recognition. 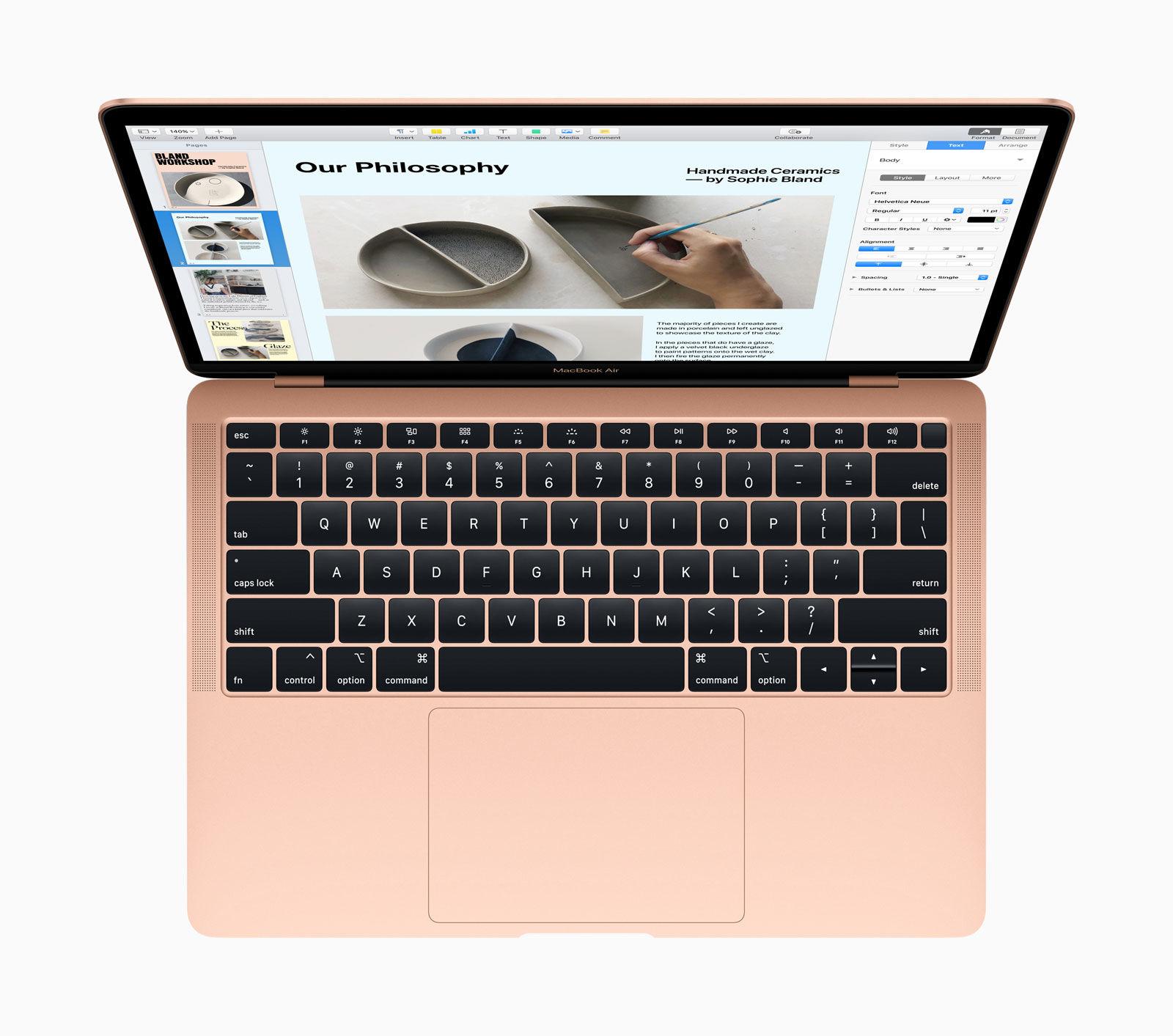 Below the new keyboard – described by Apple as the third generation butterfly keyboard – there is a larger Force Touch trackpad offering 20% more surface area than previously.

Apple can make some pretty impressive claims about speed and power improvements, but you’d expect that after a three year hiatus.

The new Air offers up to 16GB RAM, which is twice as much as the last generation. And you can get a 1.5TB SSD. It’s a far cry from the 64GB SSD in the MacBook Air when it first launched ten years ago in 2008. 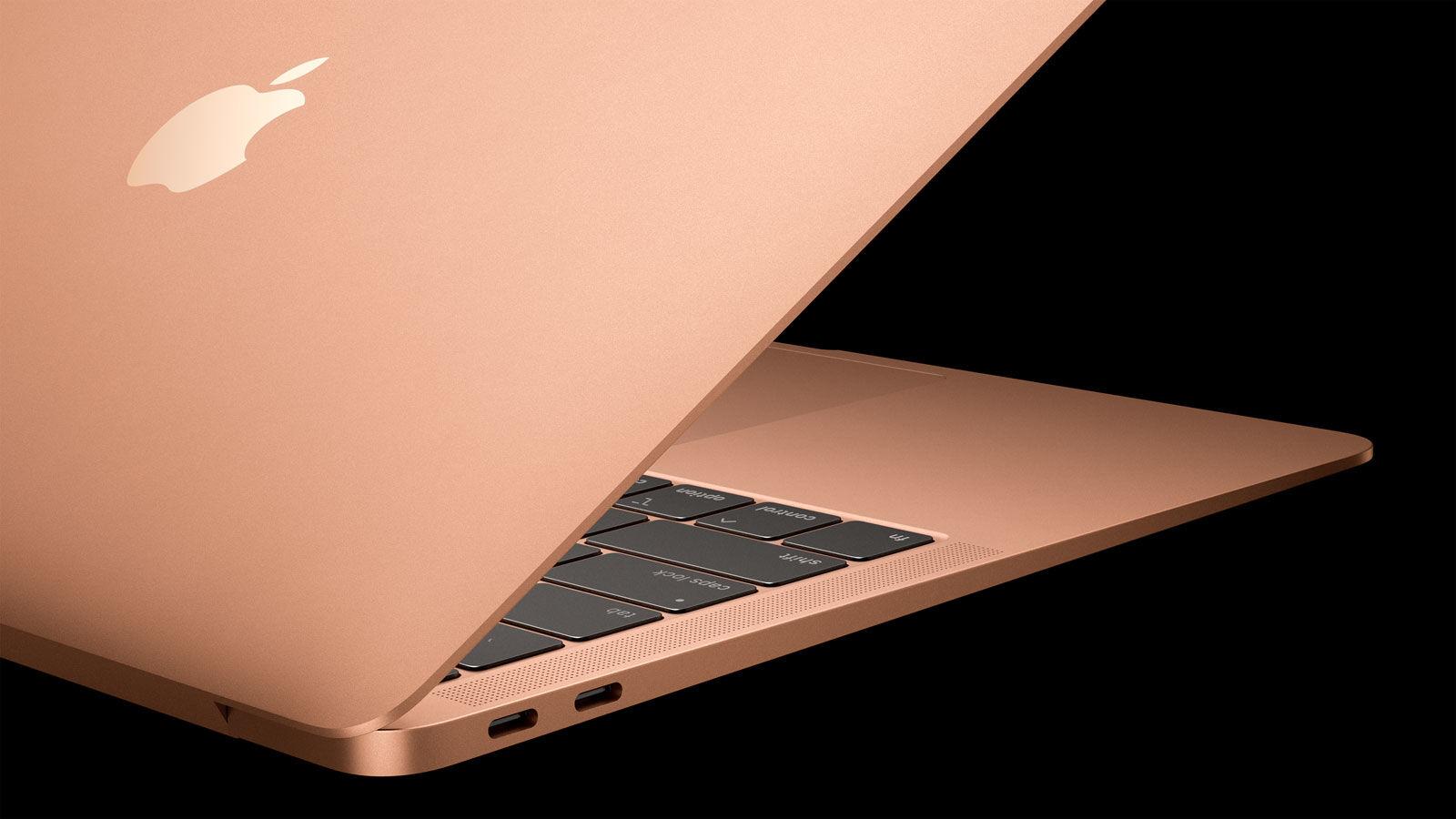 The MacBook Air also features the T2 chip that was introduced with the iMac Pro and features in the MacBook Pro. This chip offers security measures for Touch ID and supports Hey Siri on the Mac.

If you were hoping for a large crop of ports you’ll be disappointed, but there’s two Thunderbolt 3 ports, which means you can use USB Type-C products with it too, and even power an external 5K display from your MacBook Air, or use it with an eGPU. There is also a headphone jack if you were worried about that. 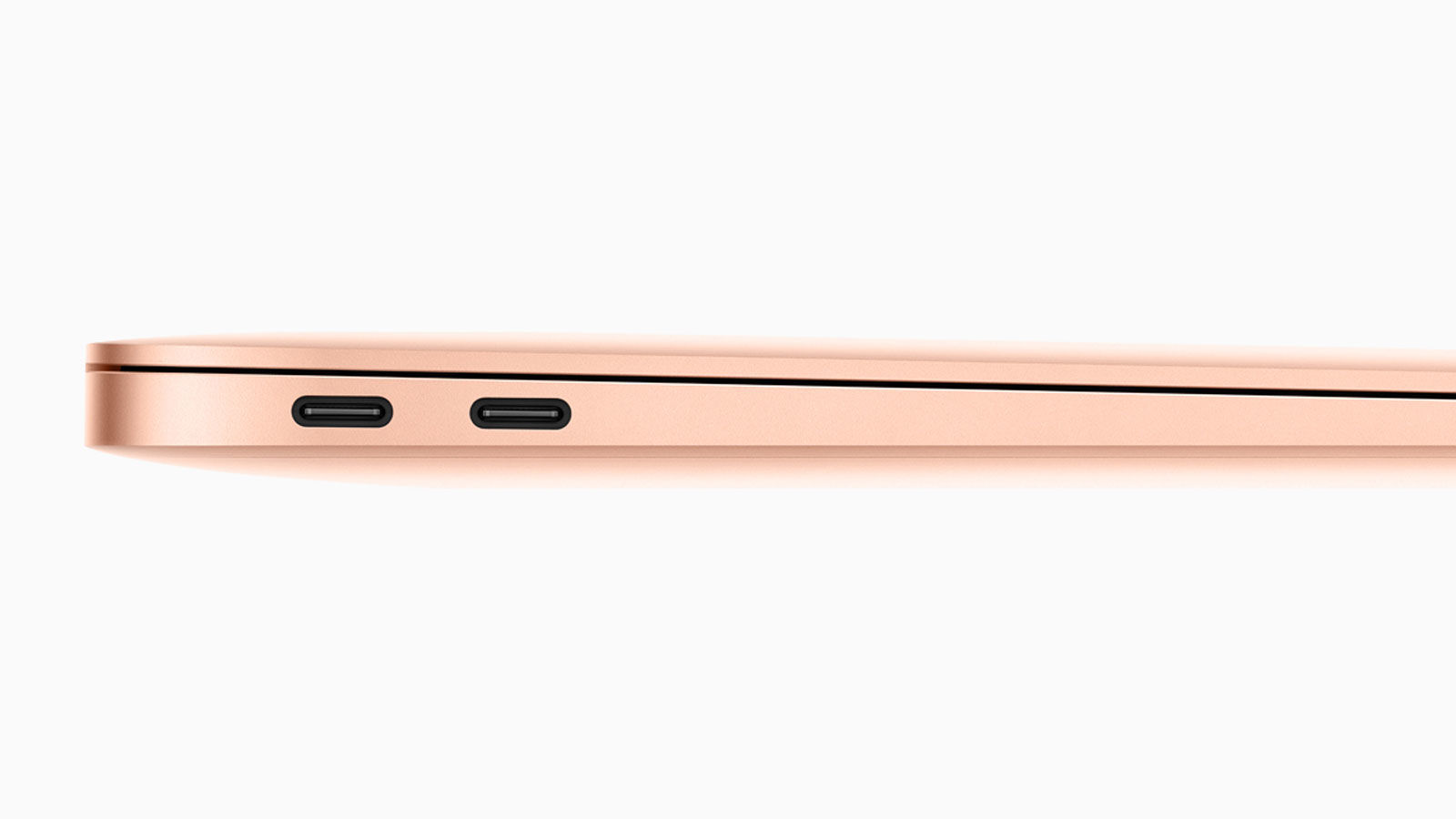 We’ll be updating this as we learn more about the new MacBook Air.