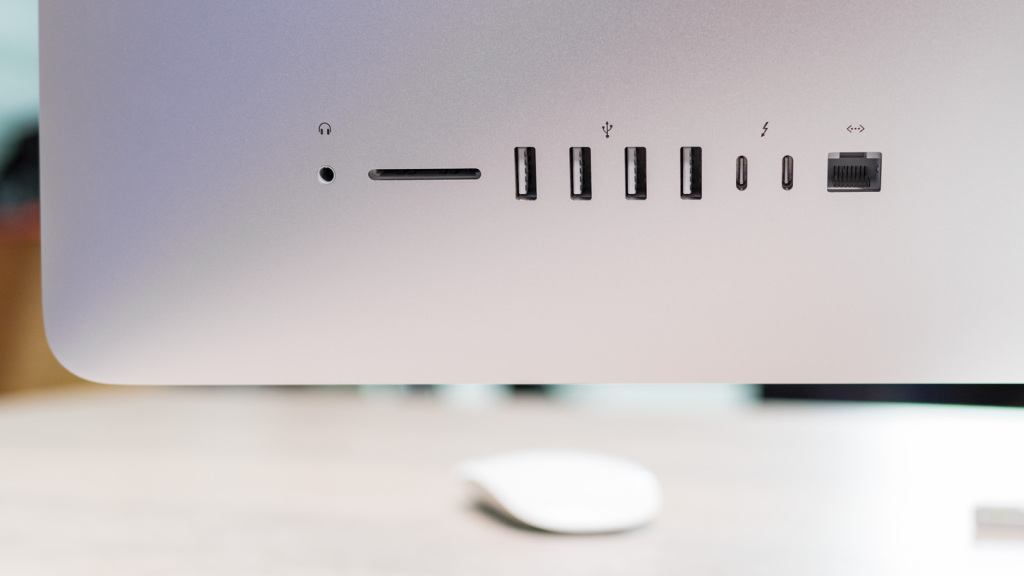 Apple devices come with a range of ports into which you plug accessories, chargers and other external devices. But, with technology constantly changing and bringing new hardware solutions to old problems, how can you keep up with the current openings on your iPhone, iPad or Mac?

From Thunderbolt and Lightning to USB-C, SDXC and HDMI, here’s our quick reference guide to what each port on your Apple product is called and how it can be used. 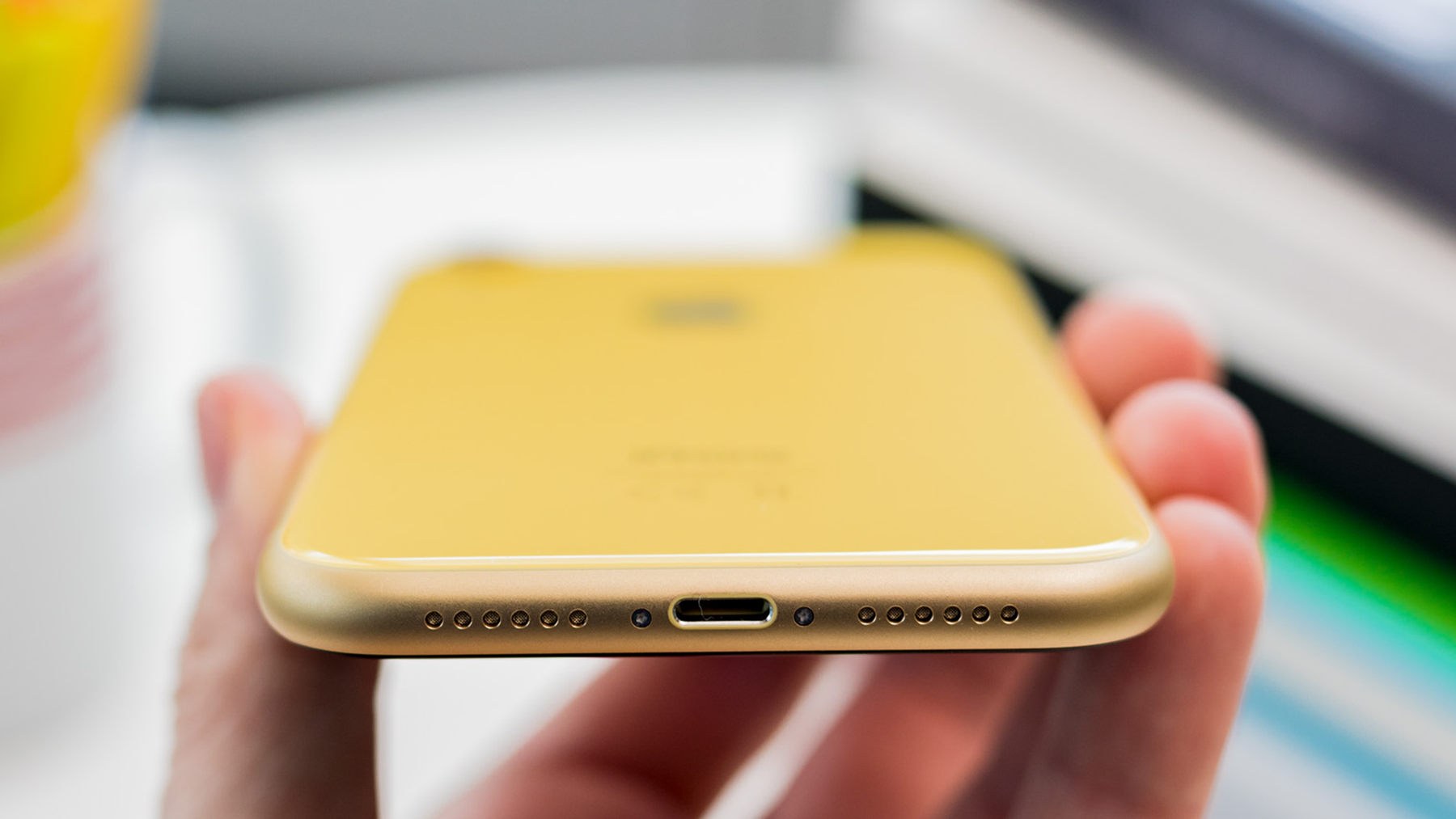 What is the Lightning port?

The Lightning port is the small rectangular oval port, found in the centre of the bottom edge of your iPhone, non-Pro iPad, and iPod Touch.

What does the Lightning port do?

When Apple launched the iPhone 5 and the 4th-generation iPad it replaced the classic 30-pin connector that had featured on all the previous models with the new Lightning technology. As well as being much smaller (and thus allowing more room for technology inside even smaller devices) these new connectors were fully digital and could be inserted either way up. It remains the main port found on iPhones and most iPads today.

The Lightning port is primarily employed for charging iOS devices, but can also carry data to and from connected Macs or PCs. Lightning cables are also able to power connected devices – great for music interfaces on iPads. One popular use on iPhone, due to the lack of a 3.5mm headphone jack (see below), is to plug an adapter into the Lightning port, thus enabling wired headphones to be connected once more.

Here’s our roundup of the best Lightning cables.

Which devices is the Lightning port on?

All current versions of iPhones, non-Pro iPads, and iPod Touch. Older iPad Pros also featured Lightning ports, but the introduction of the iPad Pro 11in (2018) and iPad Pro 12.9in (2018) models saw a switch to USB-C which we cover below. 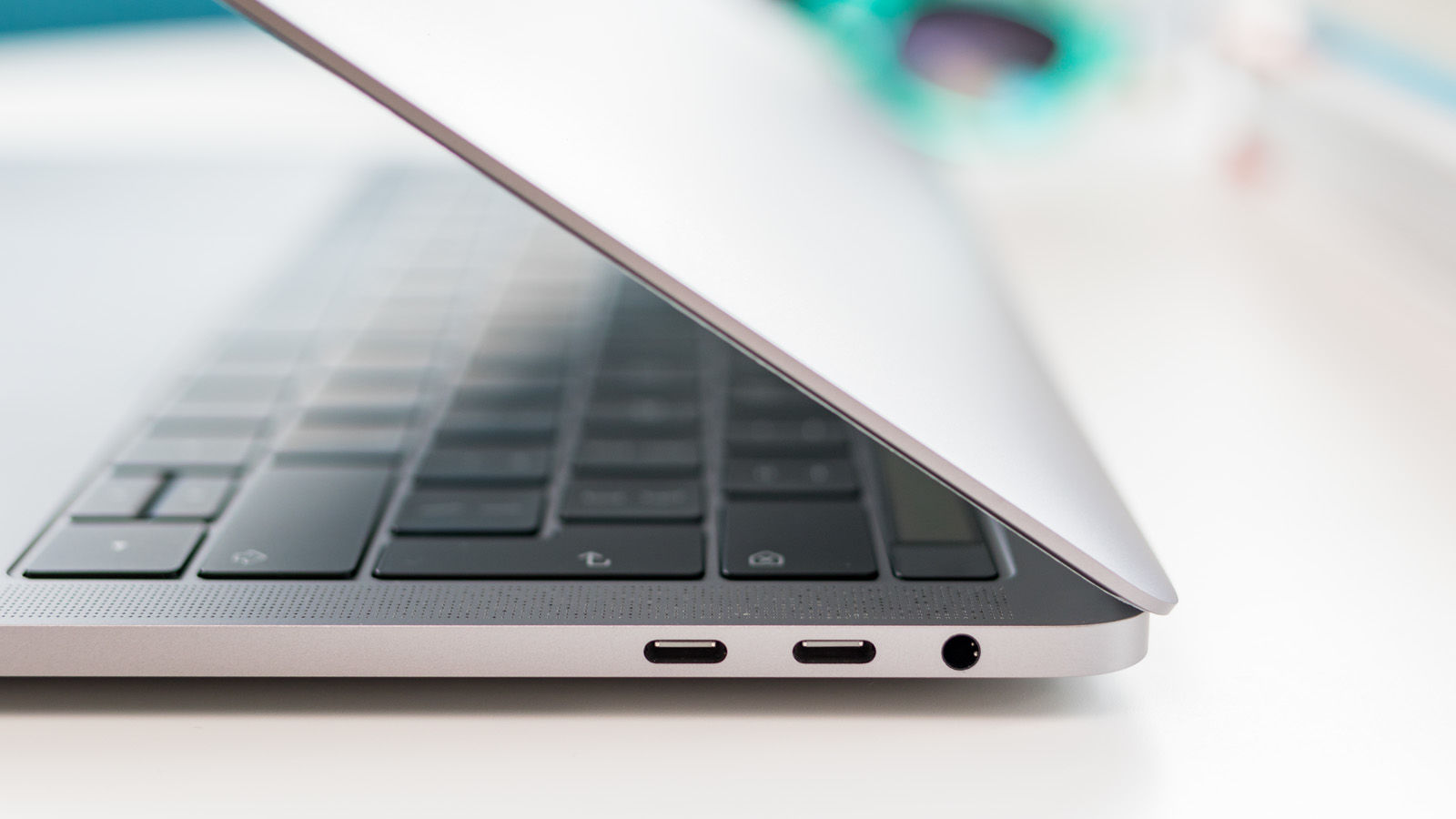 A small circular port found on the top or bottom of certain iPads, iPod Touch, and older iPhones, as well as on the sides of MacBooks.

What does the headphone/mic port do?

One of the more self explanatory ports on your device, this 3.5mm aperture allows you to plug in your headphones or earbuds when you want to escape the noise and distraction of the world at large. They also have the ability to carry signals from a microphone, which is how you’re able to communicate with Siri when using the Apple EarPods or other headsets that come with a microphone.

Here’s our roundup of the best wired headphones.

What devices have a headphone/mic port?

It wasn’t long ago that pretty much all Apple devices came with the headphone jack as standard. Apple then famously chose to remove the port from its iPhone 7 and all subsequent models (with the brief exception of the iPhone SE). This ‘courage’ has yet to make its way to the MacBook range, but the latest iPad Pros (2018 and onwards) have now also ditched the useful 3.5mm port. 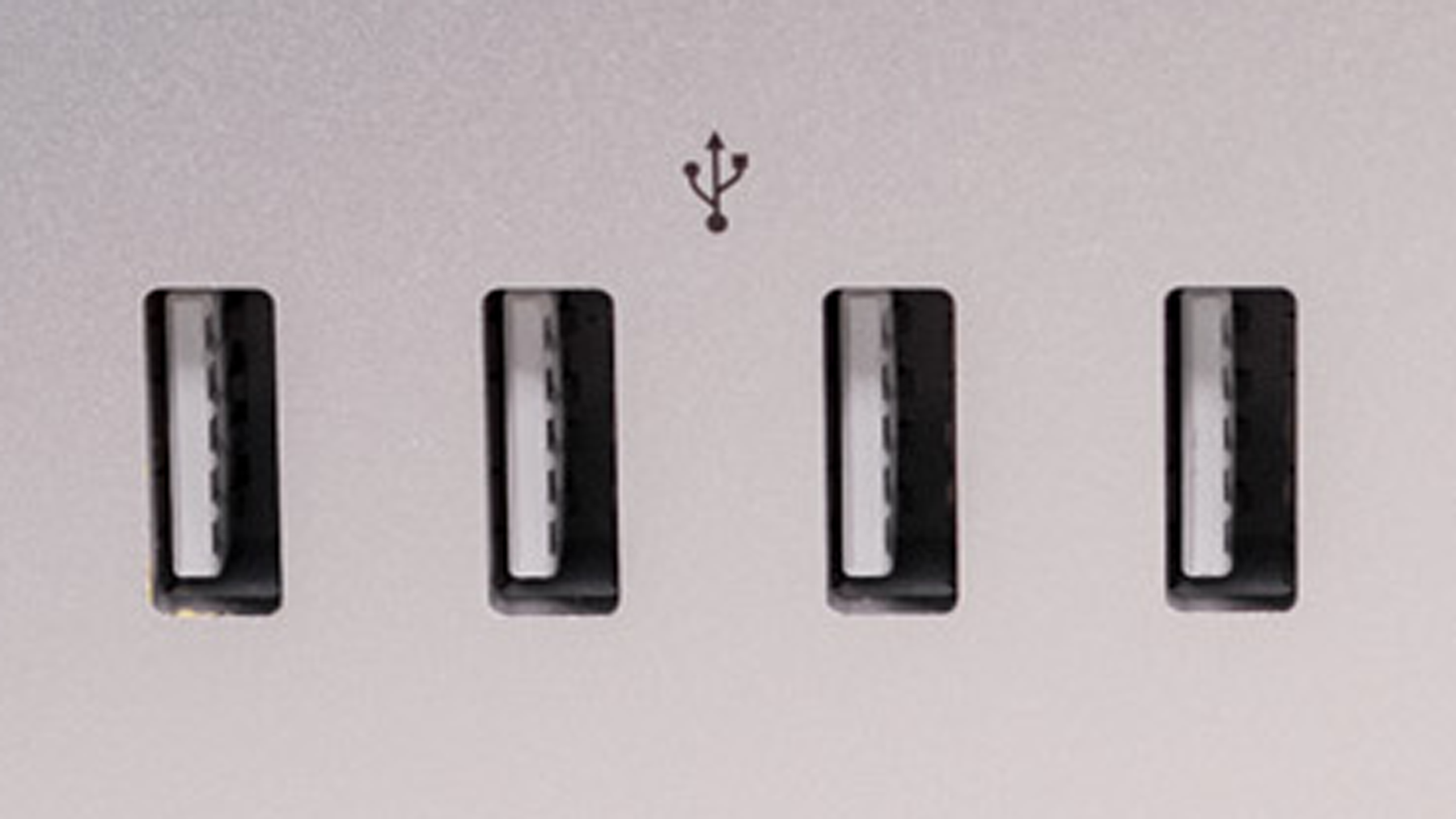 The USB 3.0 slot is rectangular, with smaller plastic rectangles taking up one half of the space inside.

Traditionally one of the most useful types of port you’ll find on your Mac, the Universal Serial Bus has been around since the late 1990’s and was intended to standardise the means by which peripherals connected to various computers. Since then the little rectangular ports have powered external keyboards, disk drives, thumb drives, microphones, desk lights, as well as being the place where you plug in an iPhone or iPad if you want to sync it with your computer or charge the wilting battery.

The port first appeared on Macs around mid-2012 and were ubiquitous across the range. They’ve now been retired in favour of USB-C on MacBooks, but you’ll still find them on the current Mac mini, iMac and Mac Pro models. 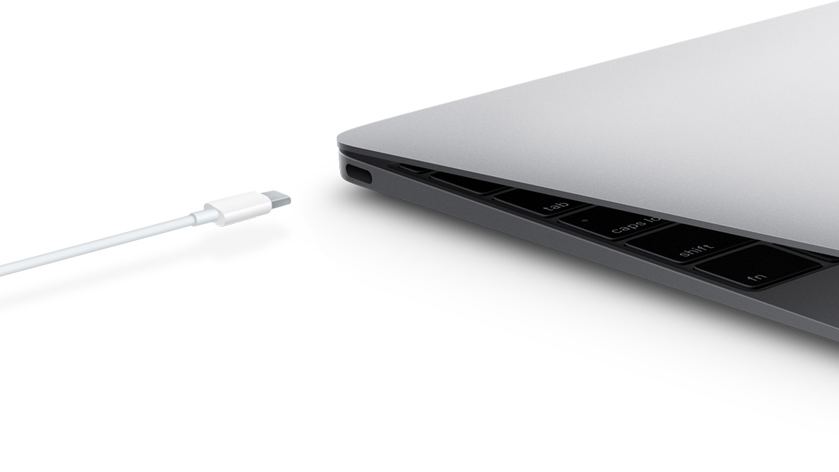 Not dissimilar to the lighting port, the USB Type-C is a rectangular oval shape. Inside you’ll also see a thin line directly across the centre. To find out the differences between the two connectors, read our USB-C vs Lightning guide.

What does Thunderbolt 3 (USB-C) do?

The Thunderbolt 3 (USB-C) port is a little more complicated than most. The reason for the dual name is that the port takes on the physical properties of USB-C as described above, but the whole thing is powered by Thunderbolt 3 technology.

The reason this is highlighted is because the same looking ports can also use the less powerful USB 3.1 protocol with little to differentiate them. In operation though, Thunderbolt 3 is capable of moving data at up to 40Gbps, while USB 3.1 currently tops out at 10Gbps with 20Gbps on the horizon.

As with all previous USB ports, the idea is that it’s a one stop shop for all peripherals, memory sticks, and anything else you want to connect to your device. Thunderbolt 3 ensures that all of the data that travels through the port does so at a blistering speed. It’s also capable of sending power at the same time, allowing users to run two 4K displays directly from the port on your Mac, all while simultaneously delivering the video content to them.

The availability of Thunderbolt 3 (USB-C) devices is slowly emerging, but it lags behind the more widely used USB 3 by quite a margin. This will change in time as the standard is adopted by more manufacturers, so until then there’s always the option of using a USB-C hub to plug all your old peripherals into your Mac.

Here’s our roundup of the best USB-C accessories.

What devices is Thunderbolt 3 (USB-C) on?

Aside from the 3.5mm headphone jack, Thunderbolt 3 (USB-C) is now the sole style or port offered on the current MacBook range. It also appears on all iMacs and Mac Mini models in the Apple catalogue, plus on the upcoming new Mac Pro. 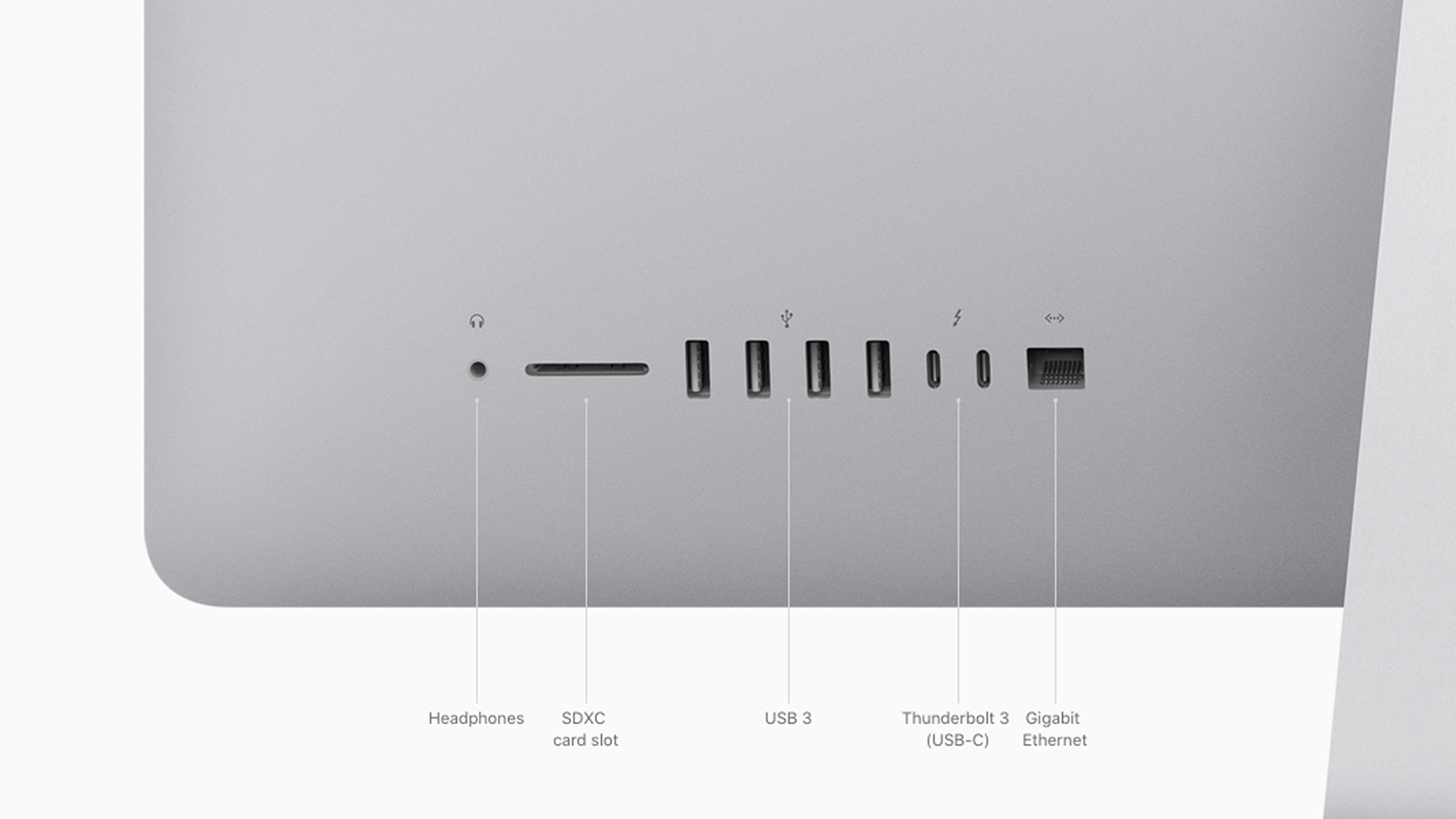 The SDXC port is a thin rectangular opening, about an inch long.

What does the SDXC port do?

SD cards are a form of storage usually associated with digital cameras. In truth you can put pretty much anything on them, much like USB.

The SDXC ports on Macs will accept any type of SD card, with the exception of the Micro SD cards you might have in your Android phone; for this you’ll need a USB adaptor or USB-C adapter.

What Macs feature an SDXC card slot for downloading photos from a camera?

None of the MacBook lineup feature an SDXC port any more, neither does the new Mac Mini, but it still survives on all of the current iMacs. 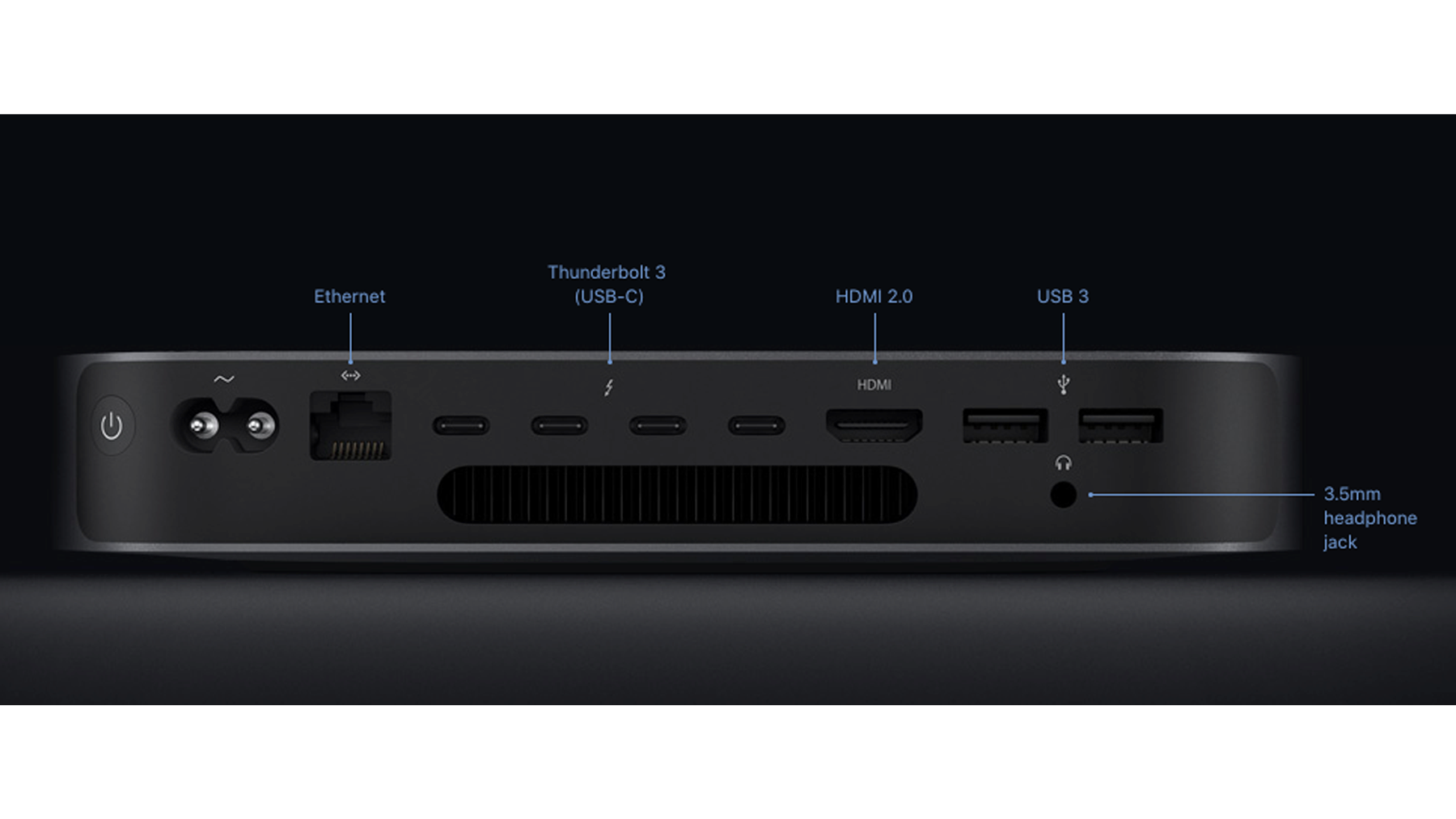 The HBMI port is a long rectangle with the two lower corners cut off. Inside there is also a thin line across the centre, and you’ll also see the letters HDMI next to the port.

What does HDMI do? What is HDMI for?

High-Definition Multimedia Interface (HDMI) allows you to send HD video & audio from your Mac to an external display. These can include monitors, projectors, and even your normal home TV. You’ll mainly use it if you are making a presentation from your Mac and need to have your Powerpoint or Keynote creations displayed on a large screen.

What Macs feature an HDMI port?

This now only remains on one model in the current range, the Mac Mini, as all the others have gone down the Thunderbolt 3 (UBS-C) route for outputting video. 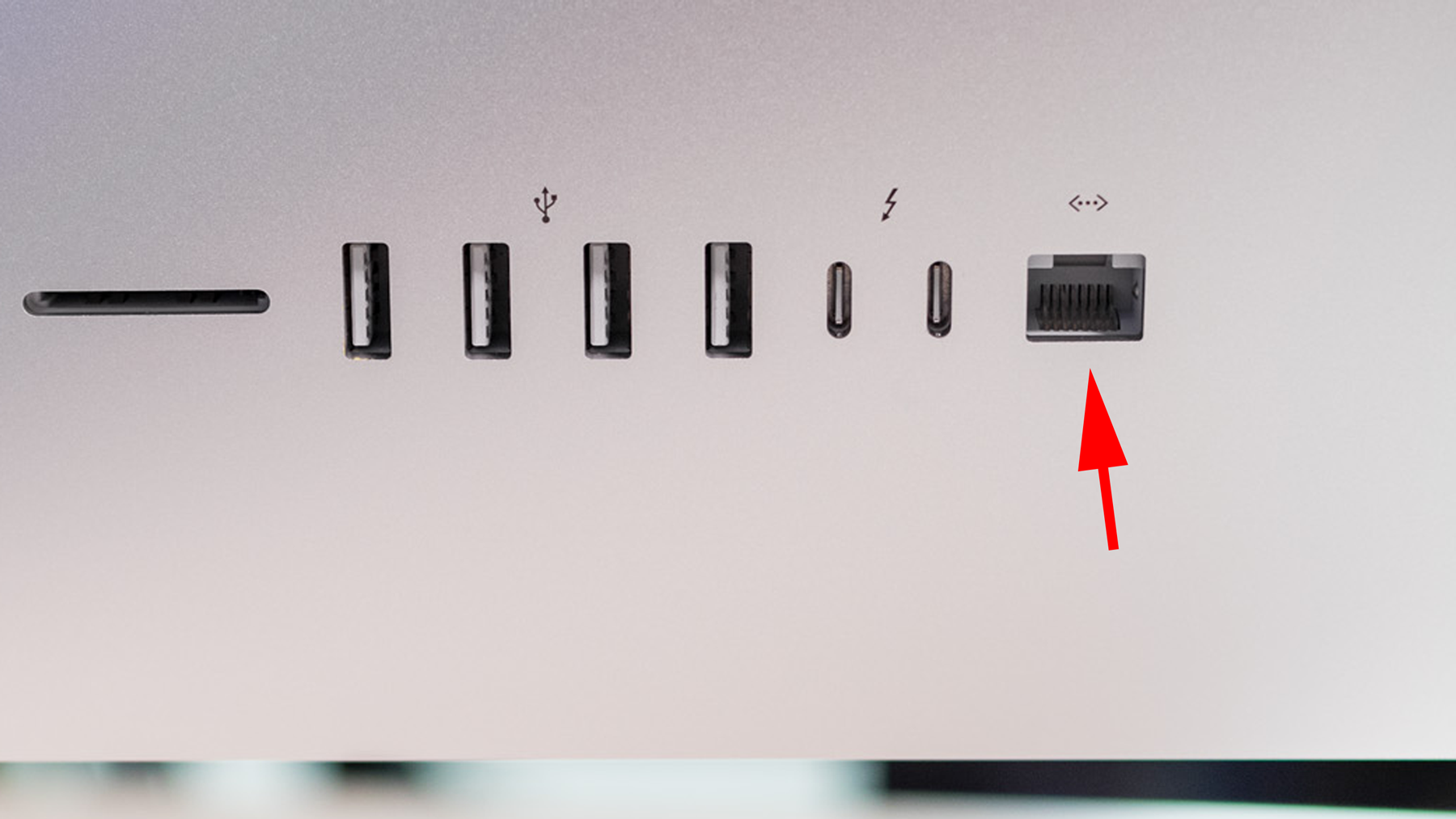 The Ethernet port is a square with two rectangles in the top left and right hand corners, and a grill like rectangle along the bottom. In many ways a somewhat nonplussed robot’s face.

The Gigabit Ethernet port allows you to plug directly into a router, using an RJ-45 cable, to get the best possible signal for your internet connection. While 802.11ac WiFi that comes fitted on all Macs is very fast, if you really need stability and speed then plugging directly into the source is the way to go. Another reason you may want to plug directly into an ethernet network is if your work WiFi isn’t able to support all the Macs in your building.

There’s also a higher powered 10GB Ethernet port that looks the same but is only available on the iMac Pro and the upcoming Mac Pro or as an upgrade option on the Mac Mini. See our iMac Pro vs Mac Pro comparison for more details on what these powerhouses have to offer.

What Macs feature an Ethernet port? 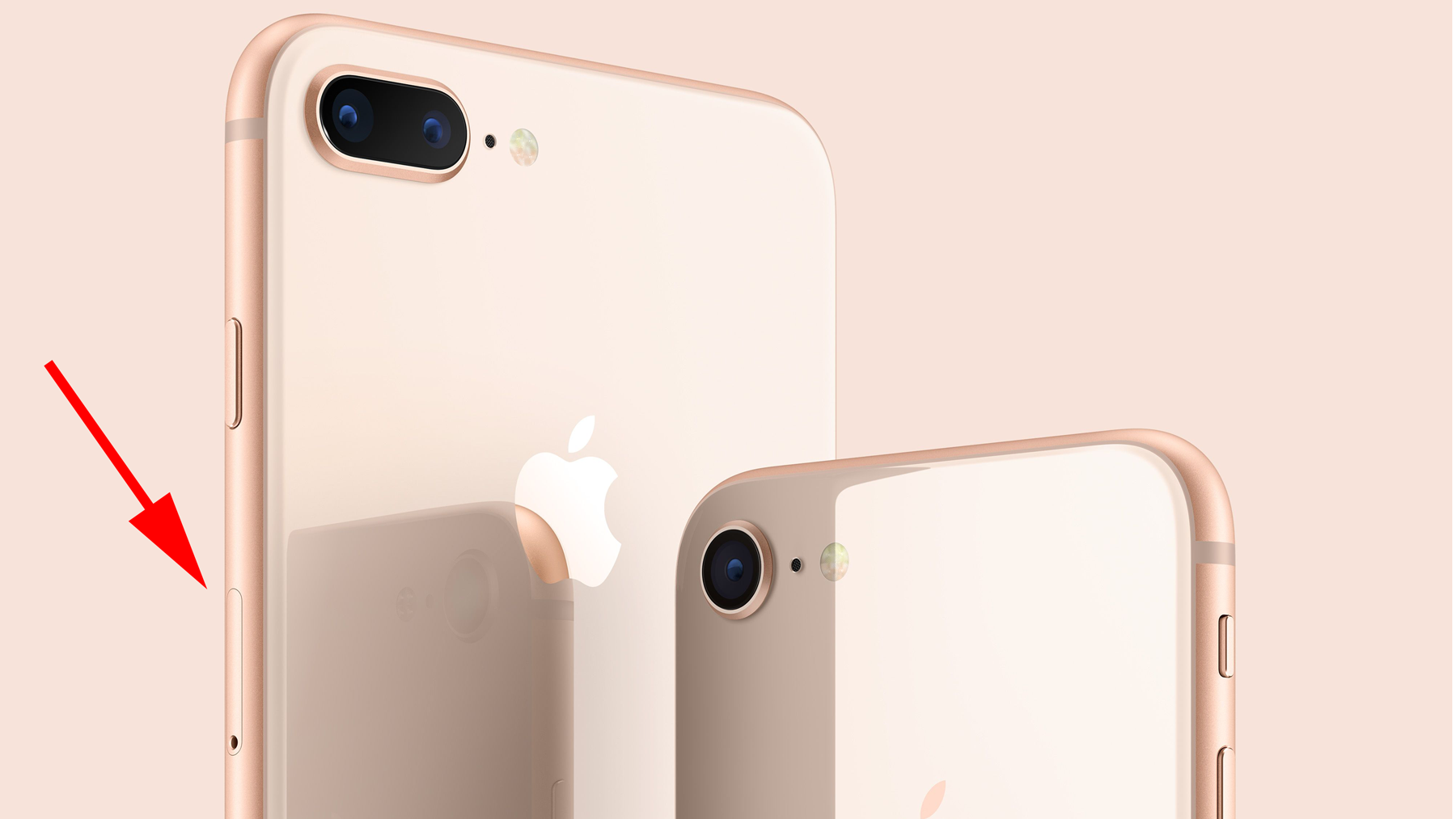 What does the SIM slot look like? Where on the iPhone/iPad is the Sim slot?

The SIM slot is a thin rectangular oval panel with a circular hole at one end. You need to stick a SIM removal tool into the hole to pop the SIM tray out. Read: How to put a Sim card in an iPad and How to cut a Sim card to fit in a phone.

What does a SIM card do?

For any mobile device to connect to a 3G or 4G signal it needs a SIM card. The SIM slot is where you insert the SIM that your mobile provider sends to you when you open an account.

iPads also have the option for Cellular models, and these come with preinstalled SIM cards that you can set up to work (for a fee) with providers of mobile data.

What Apple devices have a SIM slot?

So far only iPhones and WiFi + Cellular versions of iPads have a SIM card slot. We’d love to see SIM cards arrive on MacBooks, but it looks likely that over time roaming WiFi services will improve so SIMs in Macs won’t be necessary.