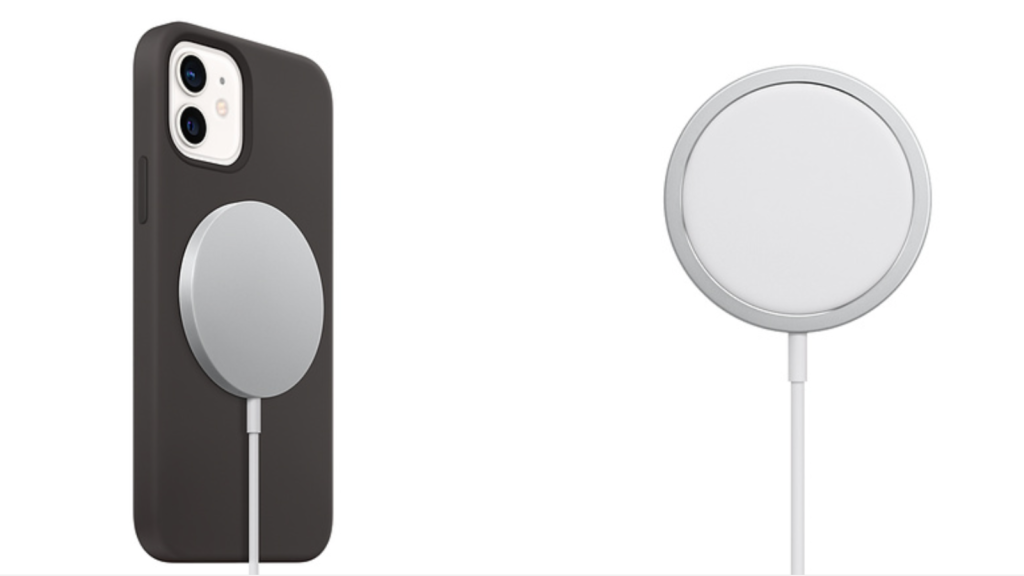 Before Mac laptops were charged via USB-C, Macs were charged via a cable that used MagSafe, a clever standard that connected the charging cable via magnets that meant it was not only easy to connect, it disconnected if you tripped over the cable (which meant your laptop didn’t crash to the floor).

Apple clearly liked the name because it has now revived MagSafe as the name for a system for charging the iPhone 12. As unveiled at the ‘Hi, Speed’ event on 13 October.

What is MagSafe for iPhone

Each iPhone in the iPhone 12 series contains a ring of magnets built around a Qi charging coil. As a result you can snap charging accessories onto the iPhone 12. It’s similar to how the Apple Watch snaps onto its charger. 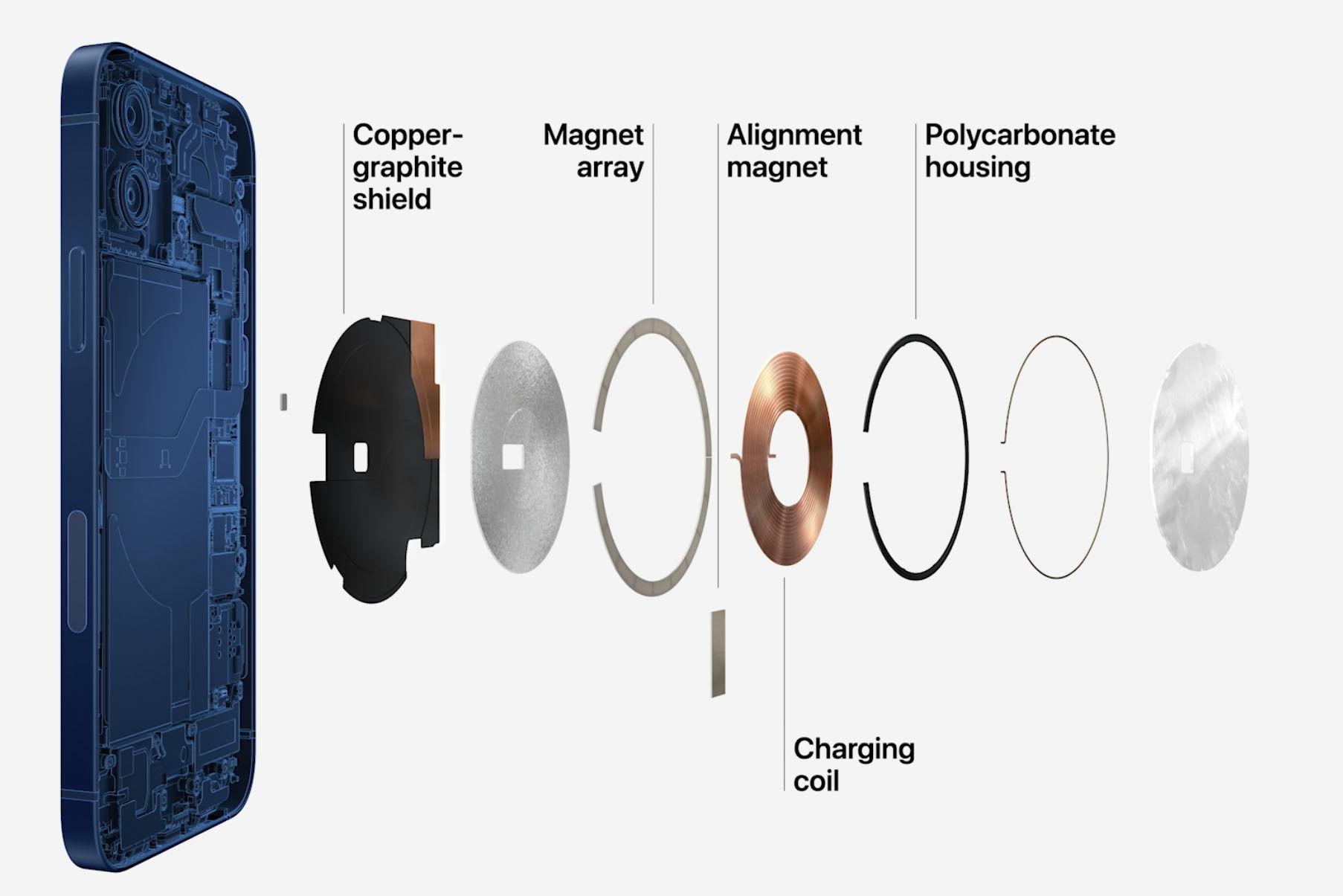 Apple’s MagSafe charger – which is sold separately for £39/$39 – is a round disc that includes magnets that attach to the magnets inside the iPhone to align automatically. 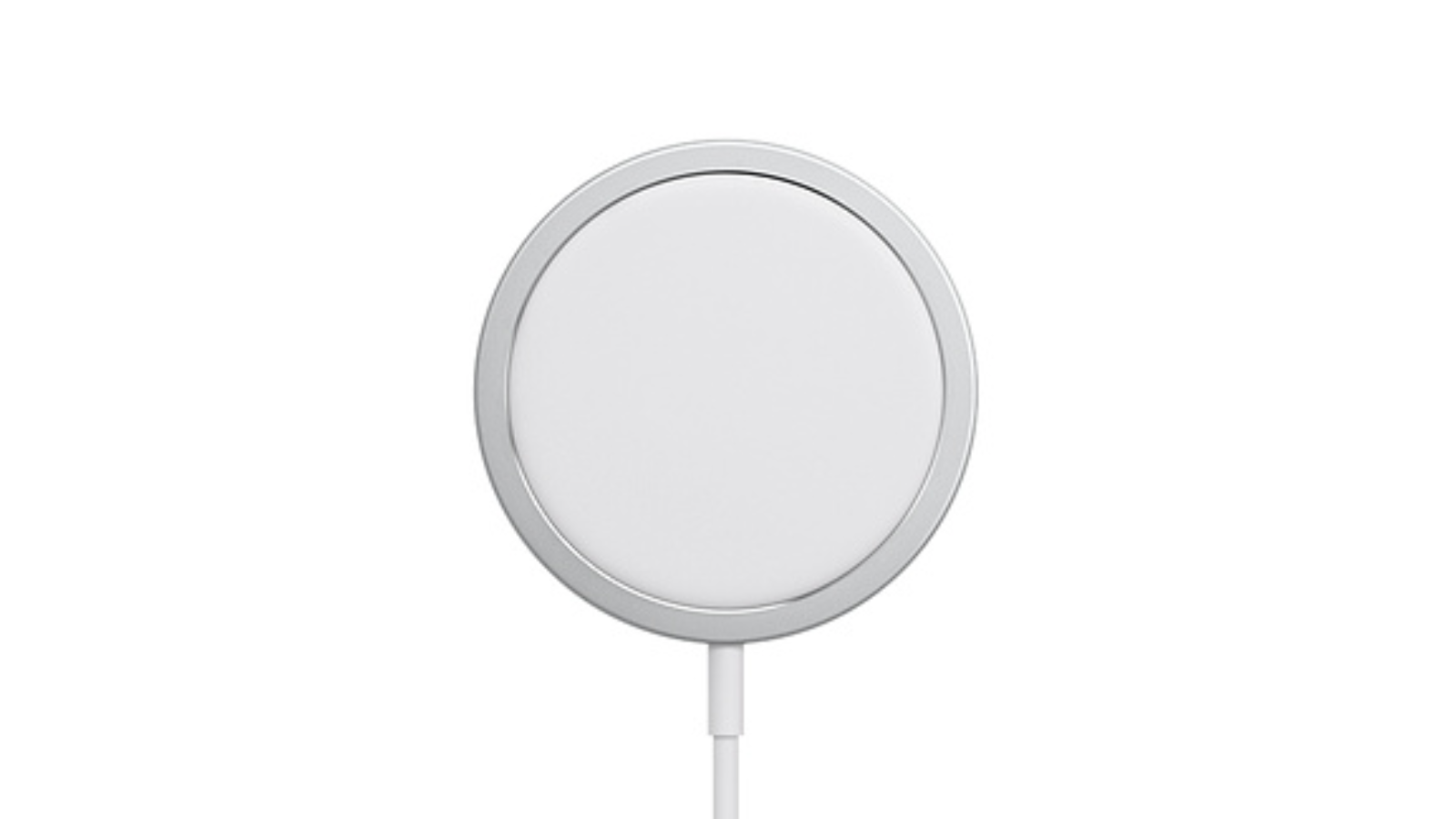 There is a reason why you only get 15 watts MagSafe charging with some power adapters. The new iPhones still support existing Qi-enabled wireless charging at rates up to 7.5 watts – but only matching MagSafe chargers are capable of charging at 15 watts.

Among Apple’s chargers, only the 20-watt charger that comes with the new iPad Air gives MagSafe the maximum power of 15 watts. Connected directly to a MacBook, you get around 10 watts, and the same with Apple’s large MacBook charger, which of course can actually do much more. Some third-party chargers can handle up to 12 watts, but we have not found one that provides all 15.

Read our iPhone 12 review for more information about the 2020 iPhones.

Which iPhones have MagSafe?

Note that the iPhone 12 mini only charges at 12 watts with MagSafe.

Why MagSafe is good for iPhone charging

MagSafe should ensure that iPhones are properly aligned to their wireless charger – when alignment doesn’t happen they may not charge. It could spell the beginning of Apple’s move away from wired charging to wireless charging for the iPhone – with a future iPhone having no charging ports at all. This could allow Apple to make iPhones even more waterproof.

Read about why MagSafe will probably mean we will never see an iPhone with USB-C.

Problems with MagSafe for iPhone charging

It’s not all good news though: Apple has revealed that the MagSafe charger can leave a mark on leather cases, and it seems that some silicon cases have already shown marks. More about that here: Apple warns: MagSafe can leave round marks on leather cases.

Apple sells a number of MagSafe charging products – you can view the collection here.

Apple’s official MagSafe charger costs $39/£39. You can buy it here.

Apple also sells the MagSafe Duo Charger: a double charging mat that allows charging of both the iPhone and Apple Watch or AirPods. (This could be the AirPower charger we were all waiting for). The MagSafe Duo went on sale in December 2020. Wondering whether to buy one? Read: Should I get MagSafe Duo?

Apple also sells a leather wallet for £59/$59. It comes in four colours and attaches to the back of the iPhone (so it provides somewhere for your cards, rather than a protective case). The leather wallet is shielded so your credit cards should be protected from the magnets inside the iPhone and the case.

Apple will also sell leather cases, but these do not yet have a price or release date.

Apple sells a number of silicone and clear cases here for £49/$49. Some silicon cases are already available, others will launch later. These cases will allow the iPhone to securely snap on to the MagSafe magnets, and allow MagSafe snap-on charging right through them. We have a round up of iPhone 12 cases here.

Third-party chargers and accessories will also be available, including these from Belkin. For example the Boostcharge Pro MagSafe 3-in-1 Wireless Charger available here for $149.99 (UK price TBC).

What else does MagSafe work with?

Apple’s new MagSafe charger should work with other mobiles and gadgets. Our collegues at Macworld US tested how it works with other gadgets from Apple and other manufacturers.

How other Apple products work with MagSafe

iPhone SE Apple’s cheapest iPhone model has no hidden magnets so the MagSafe charger just fell off. It did charge however. Attaches: No Charging: Yes

iPhone 11 iPhone 11 did grab the MagSafe charger a bit, but the grip was insufficient. Attaches: No Charging: Yes

Apple Watch Series 6 The MagSafe charger didn’t work at all with even the latest model of Apple Watch. Attaches: No Charging: No

AirPods Pro We were able to get the MagSafe to charge the wireless case for the Airpods Pro, as long as we placed it correctly. Attaches: No Charging: Yes

iPad Pro Since the iPad Pro does not support wireless charging at all, we knew it would not work, but we were surprised that the MagSafe puck was not even able to attach to the magnets. Attaches: No Charging: No.

How other products work with MagSafe

Samsung Galaxy Note 20 Ultra The MagSafe puck sat so hard against the back of Samsung’s large flagship mobile that we had a hard time shaking it off. Attaches: Yes Charges: Yes

Samsung Galaxy S10 Plus Despite the fact that the back is made of glass, the MagSafe charger attached surprisingly well to the S10 Plus. Attaches: Yes Charges: Yes

Google Pixel 5 The charger attached really well to the aluminium back of the Pixel 5, but not as well as the Pixel 4 XL. It did not charge. Attaches: Yes Charges: No

LG Velvet The MagSafe puck did not sit well as on the Pixel 5, but it didn’t fall off either. Attaches: Yes Loading: Yes

The first MagSafe cable arrived with the MacBook Pro in 2006. The MagSafe connector was loved for the fact that it disconnected from a Mac when the wire was yanked out, leaving the Mac safely on the desk while only the wire drops to the ground.

The presence of MagSafe on an Apple laptop was a given right up until Apple announced the new 12in MacBook with no MagSafe adaptor in 2015, choosing instead to power it via a USB-C cable, instead of MagSafe.

MagSafe was finally discontinued on Macs in 2019 when the 2017 model of the MacBook Air was discontinued. All Mac laptops are now charged via USB-C.

Of course many Mac users still use Macs that are powered by a MagSafe cable and could be looking to replace the cable due to loss or a fault, so this article will help you find the correct cable – there are actually two MagSafe standards for Mac.

Here’s what you need to know about MagSafe and the Mac.

How does MagSafe work?

MagSafe works by connecting the power socket to a Mac using magnets. This is instead of the more usual clasp/socket technique of inserting the cable inside the laptop.

The connection between a MagSafe adaptor and the Mac laptop is made using two magnetic halves. These clasp together and power is thus provided to the laptop. According to Apple’s MagSafe patent:

The advantage to using MagSafe is safety. When a laptop is sitting on a desk or table, and plugged in to a socket near the ground, the wire between the two is a trip hazard. Tripping over the adaptor cable drags the laptop off of the desk and it falls on to the ground (and is potentially damaged). MagSafe protects the laptop because the cable instantly unclasps, leaving the laptop on the desk and the cable flapping harmlessly on the floor.

The true genius of MagSafe is that it works by “non-axial” force. This means that if you pull it in any direction other than straight out it disconnects, and there’s virtually no force required to remove the connector.

It’s also a unique Apple feature, something practical that Apple fans can crow about safe in the knowledge that rival laptops are missing this one vital feature. It’s the kind of small, practical, detail that comes from thinking outside of the box. Features like MagSafe are why Apple can charge so much for its laptops: no wonder the Apple fans are mad. Read: Complete guide to ports on Macs, iPhones and iPads

MagSafe 1 vs MagSafe 2: Which MagSafe adaptor do I need? 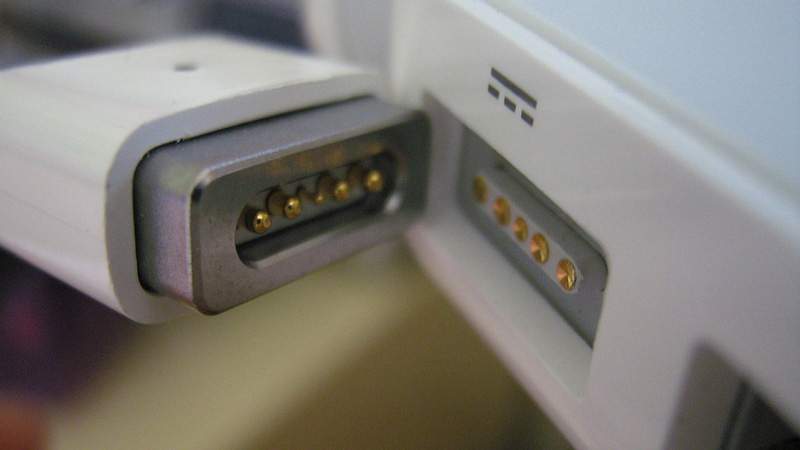 Apple’s MagSafe 1 connector. Notice that it is slightly fatter than the more recent MagSafe 2 connection

There are two different versions of MagSafe, conveniently known as MagSafe 1 and MagSafe 2. MagSafe 1 is slightly larger, and was introduced in 2006 along with the original MacBook and MacBook Pro. The first edition of the MacBook Air also used MagSafe 1, but had a slightly thinner head.

MagSafe 2 is thinner and was designed for all MacBook’s released after 2009. MagSafe 1 and MagSafe 2 are not interchangeable, but Apple sells this MagSafe to MagSafe 2 converter, enabling you to use the older MagSafe with the newer devices. 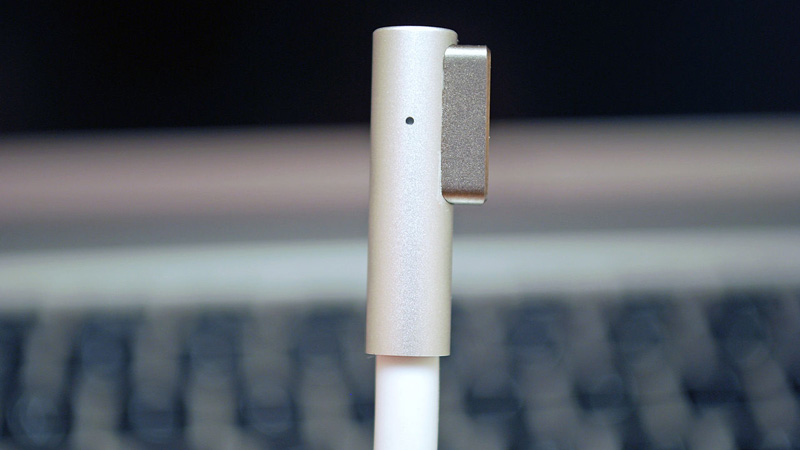 This L-shaped connection was shipped with 2009-20012 MacBook Pro and MacBook Air models. It is still MagSafe 1 though and is compatible with older MagSafe MacBooks

Which Macs have MagSafe? 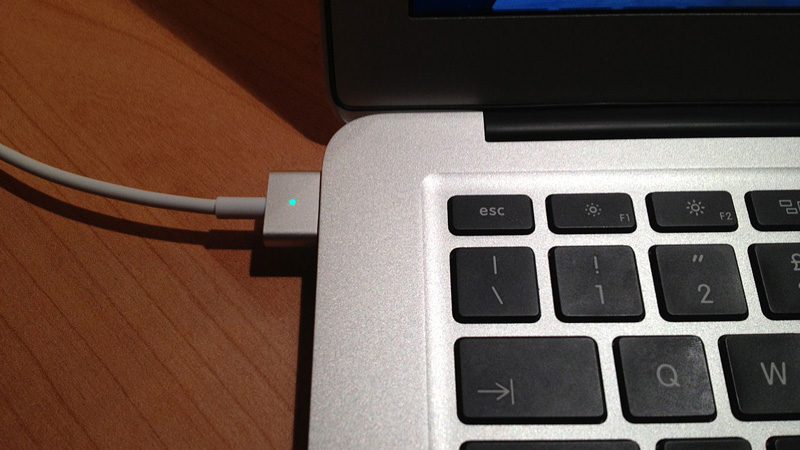 All MacBook, MacBook Pro and MacBook Air models after 2009 until 2012 feature the L-Shaped MagSafe 1 connection. This is a redesigned head that is more robust, but compatible with older MacBooks.

From 2012 to 2015 all MacBooks Air, MacBook and MacBook Pro models used the newer MagSafe 2 connection. This is thinner and wider than MagSafe 1.

It’s pretty easy to tell which version your MacBook uses by looking at the slot. The MagSafe 1 adaptor is thicker, while MagSafe 2 is longer and thinner. But the range of similar connections can make it confusing if you don’t know what you’re looking for. This Apple Support document: Find the right power adapter and cord for your notebook has more information on MagSafe connections and Mac laptops.

If your Mac has a USB-C charging port the port will look like this: 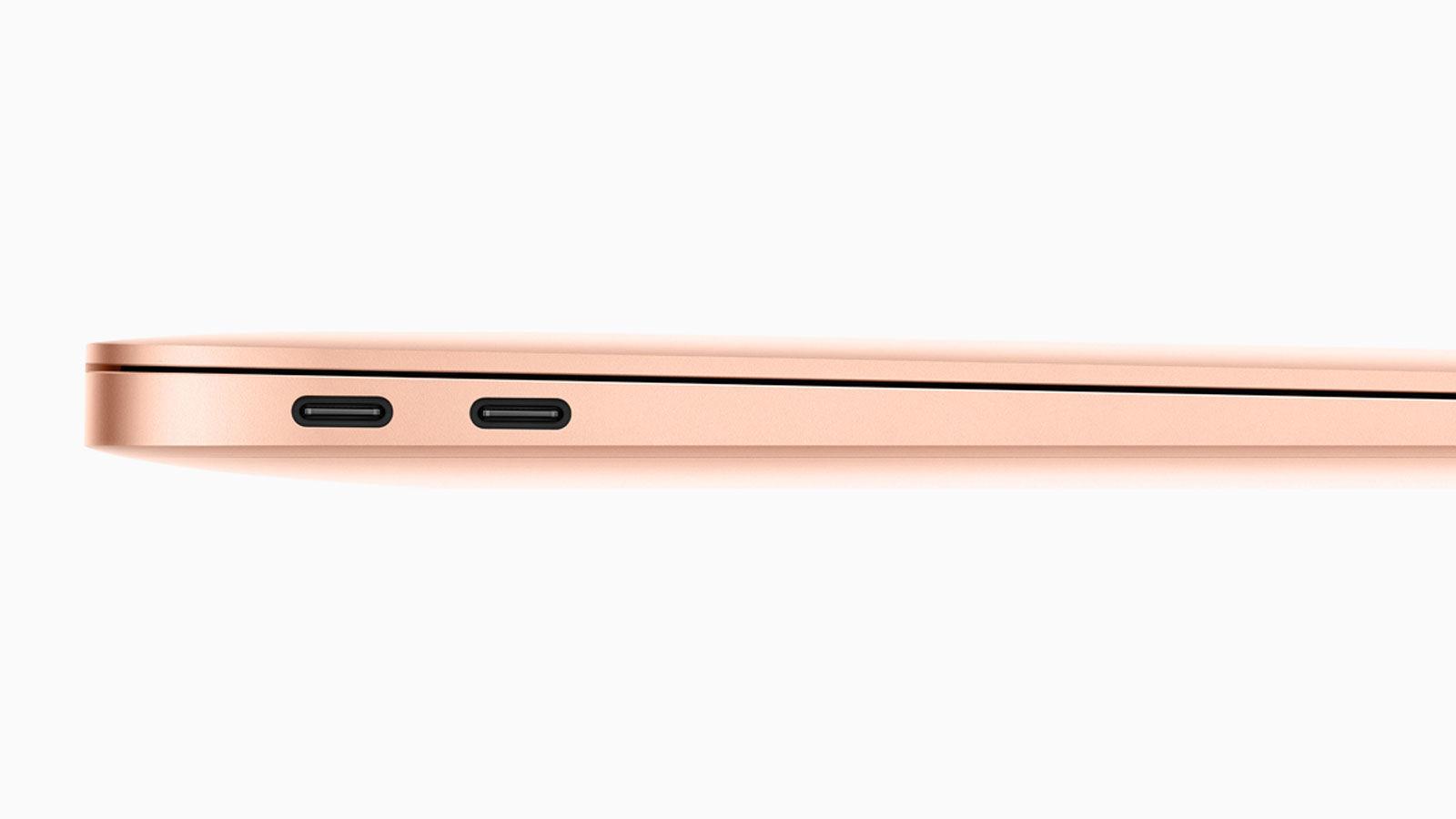