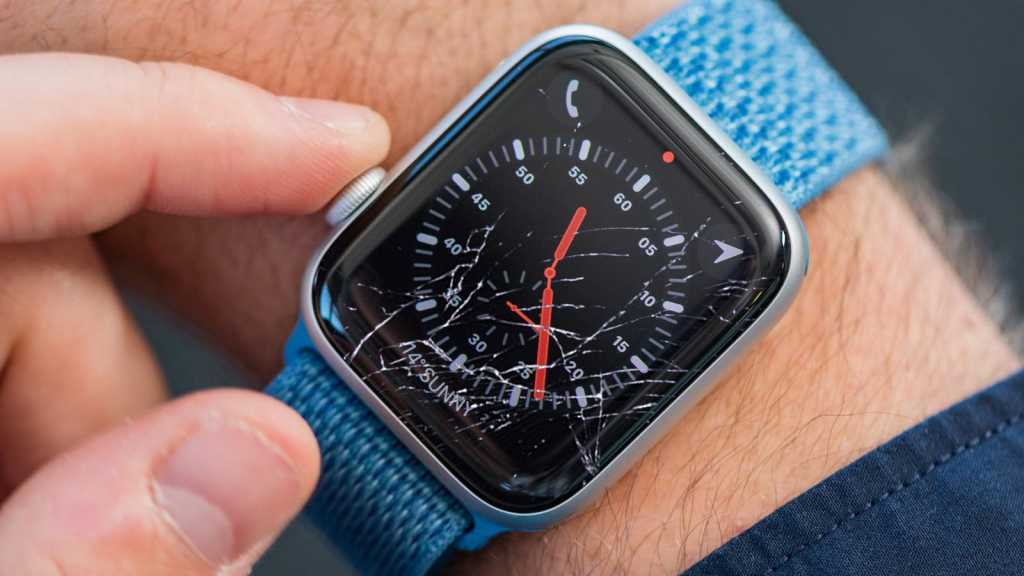 Apple Watches are sturdy but not invincible, and they have been (occasionally) getting broken almost since the wearable first launched. But cheer up: if your Apple Watch has got scratched, cracked, smashed or water-damaged, there’s hope for getting it repaired or replaced. In this article we help you through that process.

Screen damage is probably the most common problem; other owners find the back plate comes off or complain about poor battery life. And for issues with unresponsive rather than physically damaged Apple Watches, you should read How to fix an Apple Watch that’s not working.

If you eventually give up on getting a free repair and decide to just buy a replacement, make sure you first read our Apple Watch buying guide and our roundup of the best Apple Watch deals.

The Apple Watch’s screen shouldn’t break easily because the glass is strengthened. Cheaper models (any with an aluminium case) have a watch face made of Ion-X glass, while the stainless steel models (plus any of the old Apple Watch Edition models made of gold or ceramic) feature a sapphire crystal front, which is supposed to be the hardest glass known to man.

Sure enough, the sapphire models seem to be coping better with the wear and tear of daily life as a high-end wearable, with slight scratching about the worst we’ve seen among normal usage scenarios. (That doesn’t mean your Apple Watch Edition won’t shatter tomorrow, of course, but the chances seem to be in your favour.) The Ion-X models, on the other hand, have been documented in quite a few cases as sustaining more visible damage: smashed glass and the like.

We mentioned normal usage scenarios just then, and you might be wondering what abnormal usage might look like. Well, how about the drop-tests run by TechRax on YouTube? They found that the Apple Watch “will smash if you throw it face-down at the floor”. Which answers that question if you were wondering.

Should you smash your Apple Watch screen, whether or not you were hurling it at the floor at the time, it seems in principle to be fairly easy to replace the screen – very shortly after the launch iFixIt took the watch apart and found that the screen was easy to remove and replace. See below for more information about iFixIt’s tests.

Mind you, it’s possible that it may not be as easily scratched as some reports have suggested. In a video (embedded below) Consumer Reports was only able to scratch the Apple Watch Sport screen after some pretty extreme efforts, and the site claimed they couldn’t scratch the sapphire screen on the stainless steel Apple Watch at all.

If your watch has got damaged, you may wish to jump ahead to our section How to get Apple to replace a broken Apple Watch.

As well as damage to the all-important watch face, the stainless steel Milanese loop strap has been cited as a possible weak link: you’ll observe that it appears slightly scuffed up in the picture below.

This isn’t all that surprising, because stainless steel can scratch quite easily. And at least the Apple Watch’s straps are easily replaceable. (See our roundup of the best Apple Watch straps for advice on that front.) 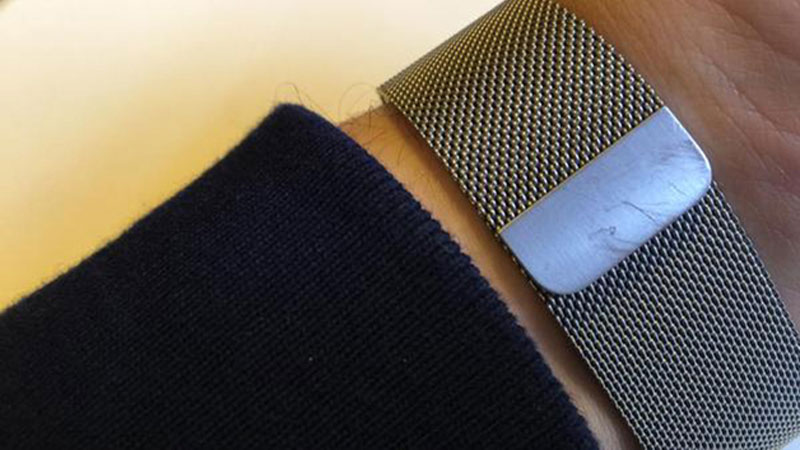 In any case, this YouTube video suggests that you can fix any scratches on the Milanese loop strap using a stainless steel polish you can pick up in a hardware store.

Is it possible to repair it yourself?

iFixit rapidly took the Apple Watch apart to see how easy it would be to fix if anything went wrong with it, and the news was mixed. While the screen is simple to remove and replace, repairs to other component parts may be distinctly problematic.

iFixit said: “Despite rumours (and hopes) of an upgradable product, the difficulty of removing the S1 alone casts serious doubt on the idea of simply swapping out the internals.”

As for whether the Apple Watch will be upgradable in the future, iFixit says: “Stripping out the internals will be difficult and time-consuming – not the sort of thing your local Genius is equipped to handle, but we suppose Apple could provide a mail-order option.”

Overall, iFixit gives the Apple Watch a repairability score of 5 out of 10, noting that at least the watch band is easily removed and swapped for a replacement; the screen can be removed (which is good news for anyone who has already smashed theirs) and the battery can also be removed quite easily.

However, iFixit notes that removing components is “essentially impossible” as they are soldered onto the back of the S1 and this “fully encased S1 system” makes board-level repairs impossible.

If your watch has got damaged and you don’t feel able to repair it, you may wish to jump ahead to our section How to get Apple to replace a broken Apple Watch.

As we discuss in our article Is the Apple Watch waterproof?, the water-resistance of your device depends on which model you’ve got.

The Series 2, 3 and 4 have a water resistance rating of “50 metres under ISO standard 22810:2010”. It’s fine to wear them in the bath or shower, and for shallow-water swimming. The company does warn, however, that these models “should not be used for scuba diving, waterskiing or other activities involving high-velocity water or submersion below shallow depth.”

The first-gen Apple Watch and the Series 1 are a less clear-cut case. While Apple doesn’t recommend submerging these devices in water, many owners have discovered that they are water-resistant to a certain extent. (The original Apple Watch actually has an IPX7 rating, which means it can withstand up to 30 minutes of submersion in up to a metre of water.) 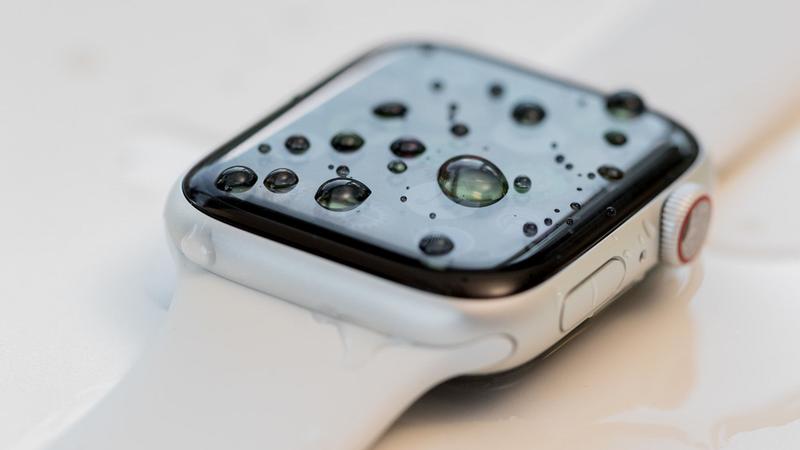 What to do if your Apple Watch gets water-damaged

In our tests with the iPhone we got the phone very wet and then used various methods to dry it out, from the famous Rice Trick to a slightly more scientific use of gel sachets. The uncooked rice should absorb the moisture effectively but may get dust or detritus into exposed ports, whereas silica gel packets – the kind that come with some electronic components, particularly if they’ve been shipped from a country with a humid climate, or with handbags – do a fine job over a number of hours.

Give your watch a few days in its pile of rice or gel sachets for a few days and then see how it fares.

If these tricks don’t succeed, you may wish to jump ahead to next section How to get Apple to replace a broken Apple Watch.

Getting it repaired or replaced

If there is a genuine fault with your Apple Watch – perhaps the battery doesn’t charge properly, or the screen glitches – this will be covered by the warranty and Apple will replace the watch, as long as you can prove you haven’t tampered with it. Your watch will be covered by a warranty for one year. Contact Apple and they’ll see you right.

Note that Apple may not replace your damaged Apple Watch with the same model – and this is actually good news. The company announced, for example, that in some cases and some countries, its staff would replace first-gen Apple Watches with Series 1 models, a newer and more advanced device with a faster processor. We’ve not heard of the offer being repeated for newer models – a busted Series 2 being replaced by a Series 3, for instance – but you never know your luck.

Even if the warranty has expired you may still be able to get Apple to help for free. If the back plate has separated from the body of a first-gen Apple Watch, for example – this appears to be a known potential issue with that model – then the company will repair the device free of charge up to three years after the initial purchase.

I sure hope Apple uses better glue for their cars than they do for their watches. pic.twitter.com/JkIThwC5B7

What if a scratch or crack appears and you’re sure you didn’t drop the watch or do anything reckless? Will Apple believe you?

A court case offers some hope here. Mr Gareth Cross, a British man from Aberystwyth, took Apple to the small claims court after the company wouldn’t replace or refund his cracked Apple Watch. (They said the damage wasn’t covered under warranty.) The court found in his favour and required Apple to pay Mr Cross the cost of the watch plus court fees.

Whether you want to go through the same legal process is debatable: as Mr Cross himself acknowledged, the case became “a little stressful” and lasted six months. But it’s possible that the precedent this sets will make Apple more inclined to offer refunds and repairs in future. We shall see.

In any case, if you’re particularly clumsy, you can buy insurance from Apple that will cover your Apple Watch if it does get damaged. We discuss AppleCare in this article: Is AppleCare worth it? To see what you legal rights are, read Is Apple mis-selling AppleCare to UK?

AppleCare+ cover for the Apple Watch starts at £59. The plan will extend the watch warranty to two years and grant you up to two accidental damage claims (although if you do damage your watch you will have to pay an excess).

In the US Apple also has three AppleCare+ plans that’ll cover both your Watch and your iPhone, presuming your phone is less than six months old. Unfortunately such plans are not available in the UK.